One of the reasons you notice the motion blur so much without using ClearScan, though, is that the 55WL968’s pictures are extremely detailed. This is, of course, especially true when watching HD, but the set’s Resolution system also makes standard definition look much more crisp and detailed than is common on such a large TV.

For the record you can also apply Resolution to HD – and if you do, you’ll initially be startled by how much sharper pictures look. But it also makes HD pictures look too gritty for our tastes, so we restricted its use to standard definition sources.

Unfortunately, though, the 55WL968 does still have a couple of other problems left to uncover. First, input lag is – as with most LG-sourced panels – high, at an average 62ms, even when using the provided Game preset. To be fair, many LG-sourced panels have input lag in excess of 100ms, but the Toshiba’s 62ms is still almost double the average figure in the TV world generally, and is enough to at least marginally hamper your gaming skills.

The other problem is 3D. In some ways things are fine. Donning one of the four pairs of free 3D glasses, pictures look extremely bright and colour-rich; detail levels seem good considering this is a passive 3D model; the sense of space and depth is extremely well rendered, with the high brightness helping the screen reproduce excellent amounts of background detailing; there’s practically no crosstalk (so long as you keep your vertical viewing angle within 13 degrees above or below the screen); and flicker is no issue thanks to the simple passive glasses.

However, right away your brain feels slightly uncomfortable with what you’re watching. And eventually it hits you why: motion doesn’t look right. There’s noticeable stuttering when a camera pans across or zooms into a picture. Sometimes with no warning the image seems to slow down and speed up again. And finally, movement within the frame tends to look oddly ‘billowy’ – as if a few frames are being skipped.

The phenomenon is hard to describe accurately (as you can probably tell from our fumbled efforts!), but suffice it to say that it’s an almost constant distraction from the otherwise immersive qualities of the 3D images.

With the motion issues in mind, it’s a real pity that the ClearScan motion processing system doesn’t work when the TV’s in 3D mode.

Smaller issues are that, as with all very large passive 3D TVs, edges can look rather jagged, and you can sometimes see a vague horizontal line structure caused by the passive filter on the screen. But this could be considered a fair price to pay for the brightness, depth and colour-richness passive 3D gives you – were it not for the motion woes. 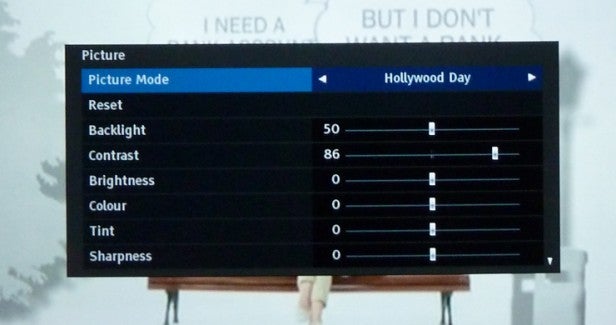 Despite its extremely thin frame, the 55WL968 isn’t a bad audio performer. Its mid-range sounds surprisingly open and expansive, combining good volume with lots of clarity and even a bit of bass – all without succumbing to distortion or harshness even during action scenes. There is another odd problem, though, in that when watching some Blu-rays we became aware of some noticeable lag between the video and audio, leading to some lip synch issues.

While we guess the 55WL968 is solid enough with 2D to have at least some appeal as a sub-£1500 55in TV, overall we can’t help but feel disappointed by it. It feels like a substantial step down from its predecessor, for a start – perhaps because the ever-pragmatic Toshiba has discovered that it does better business when it’s focussing on price rather than high-performance features.

Worse, though, is the fact that even if considered on its own merits at its lower (than the 55WL863) price point, it still has too many flaws for comfort in the contrast and, especially, 3D departments.