The predecessor to the 55WL968 we’re looking at today, the 55WL863, was every inch a flagship TV. Tucked inside its slinky body were such key attractions as active 3D playback, Smart TV functionality, Toshiba’s high-powered CEVO Engine processing, a unique auto-calibration system (via an optional colour meter package), local dimming for the edge LED light engine, and excellent picture quality – at least in 2D mode.

Not surprisingly, then, the 55WL863’s all-round appeal was sufficient to earn it a Trusted Reviews Recommended badge. So we’re pretty excited by the arrival of its successor. Especially as this 55WL968 successor is £300 or so cheaper than the 55WL863.

Pretty quickly, though, it becomes apparent that the relative affordability of the £1499 has only been achieved by some pretty significant specification ‘adjustments’. 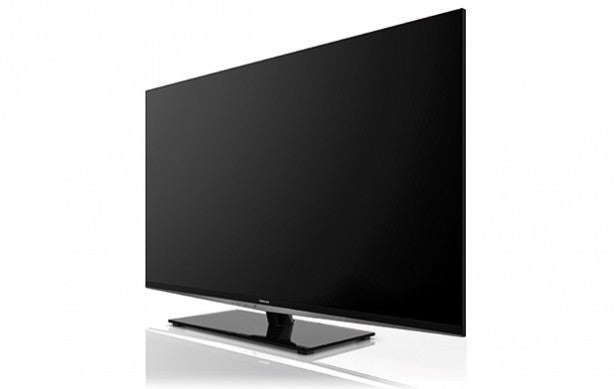 The most startling change is the 55WL968’s shift from active 3D to passive. This is intriguing because the 55WL968 sits at the top of Toshiba’s current range, yet the TL968 lower down the Toshiba range ladder uses active 3D. This suggests that Toshiba no longer necessarily sees active 3D as the premium 3D option.

There could, though, be a more ‘practical’ reason for Toshiba going passive with the WL968 range. Namely that it’s simply decided to secure panels for this range from a different source – LG – presumably as part of the bid to get the set’s price down.

We don’t intend to get into a debate here about whether active or passive 3D is best, by the way. The arguments in favour of each format are well known now, and actually, given that the 55WL863 had some crosstalk problems with 3D, maybe the shift to passive here will turn out to be for the best. In other words, we won’t dare to suggest here that the shift to passive 3D is a backward step from the WL863 series!

We certainly can say, though, that the 55WL968 not sporting Toshiba’s CEVO Engine definitely IS a backward step, and one that’s got every chance of negatively impacting the set’s picture quality.

This isn’t to say that the 55WL968 is devoid of picture processing, mind. It enjoys Toshiba’s ‘AMR400’ system, combining backlight scanning with a 100Hz panel to produce a virtual 400Hz effect. It’s also got Toshiba’s Resolution engine, which has consistently managed to deliver one of the affordable TV world’s better standard definition upscaling performances.

There is another significant feature compromise to accept with the 55WL968, though. For it ditches the local dimming engine used by its predecessor. This will potentially lead to the 55WL968 not producing as impressive a black level response as the 55WL863.

Looking back at the list of WL863 attractions at the start of this review, we’re relieved to find that the 55WL968 does at least cling on to a few of them. For starters, its Jacob Jensen Studio design looks groovy. The single-sheet-of-glass fascia and metal-edged bezel’s remarkable slimness ensure that it packs plenty of aesthetic punch – especially when you contrast the 1cm or so frame width with the huge 55in expanse of screen.

The 55WL968 can still auto-calibrate its gamma and colours if you get your hands on one of Toshiba’s optional TPA-1 colour meter packages. Though at the time of writing, this sadly seemed to be nigh-on impossible.

More usefully, the Wi-Fi- and WIDI-equipped 55WL968 not only retains the ‘smart TV’ online features of the 55WL863, but expands them. For starters you can now use Skype on Toshiba’s ‘Places’ online platform, via a rather nice optional camera/mic unit.

Places also now carries – thankfully – more video services for you to draw on, including Blinkbox, Acetrax, the BBC iPlayer, Viewster, Daily Motion, YouTube, LiveSport, Euronews, iConcerts and Woomi. Plus there’s the inevitable social media support in the form of Facebook and Twitter apps (as well as the aforementioned Skype), and even a few games, courtesy of Funspot, Smart Kidz and a Brain Trainer Space Edition… 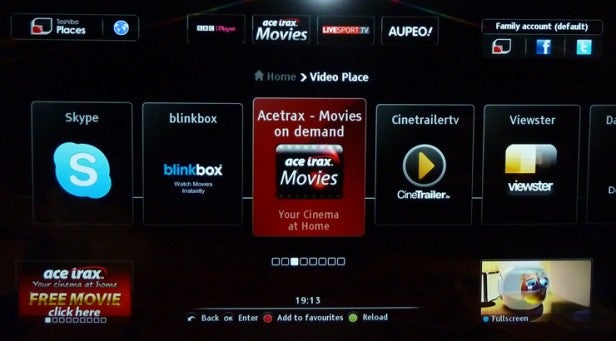 Of course, seasoned Smart TV followers will realise that even this expanded service lags behind the sort of content levels available on the online services of most of big-name rivals. The continued absence of both LoveFilm and Netflix is particularly frustrating.

Also aggravating is Toshiba’s decision to use a small video box at the bottom of its Places onscreen menus to stream bizarrely loud adverts rather than showing the TV programme you were watching.