The WL968 series represents the pinnacle of Toshiba’s 2013 range (at least until its next generation of 4k-resolution models appear later in the year). So we inevitably have pretty high expectations of the 47in 47WL968 model sat on our test benches today.

The set does nothing to dampen these expectations with its design, either. Its black bezel is sensationally narrow, while a silver metallic trim that expands into a tasteful glinting arc along the bottom edge delivers a gorgeous counterpoint to the main frame’s darkness.

The slender feel continues around the TV’s rear too, where the premium tone-setting continues thanks to a strong array of connections (most of which have been side mounted to aid wall mounting). Among the stuff that most caught our eye were four HDMIs; three USB ports; an Ethernet port; built-in Wi-Fi (and WiDi for compatible PCs); a D-Sub PC port; and both satellite and RF tuner inputs (though the satellite one is not compatible with Freesat ‘packaging’, and so is of limited use in the UK). 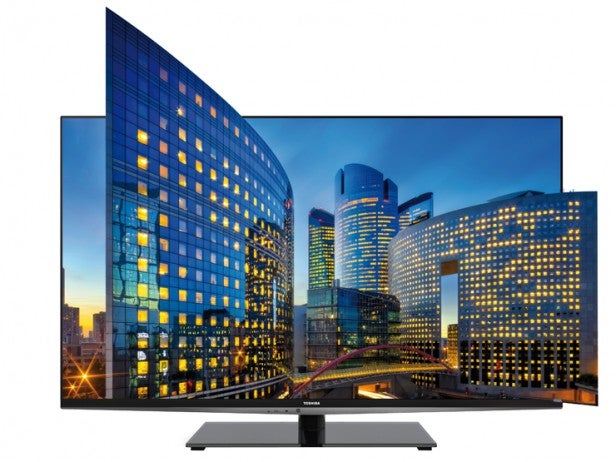 The USBs provide playback of a decent selection of video, photo and music file formats, as well as letting you record to USB HDDs from the TV’s tuners. The Wi-Fi/Ethernet options, meanwhile, let you either access files stored on networked DLNA PCs, or explore Toshiba’s ‘Places’ online service.

Both these apparently attractive features are rather fluffed, though. The DLNA setup system is less straightforward and flexible than is typical these days, while the Places engine is hamstrung by a lack of content. Particularly troubling is the lack of both Netflix and LoveFilm apps, denying users direct access to by far the two most popular video streaming services in the UK. At least one of these services is available on the online platforms of Panasonic, Sony, Samsung and LG.

The services you DO get on Places include Blinkbox, Acetrax, the BBC iPlayer, Viewster, Daily Motion, YouTube, LiveSport, Euronews, iConcerts and Woomi.

There’s much to admire in the presentation of Places, and one day its use of a multitude of themed content ‘folders’ might prove a good way of organising online content. Right now, though, the lack of content on the service leaves the folder system feeling more like an impediment to navigation than an aid.

The 47WL968 is, of course, a full HD model, and it’s got a reasonable amount of processing power driving its pixels. For instance, it boasts Toshiba’s AMR400 motion processing, combining a native 100Hz panel with backlight scanning and frame interpolation to produce a 400Hz effect. It has to be said, though, that this falls short of the 800Hz effect delivered by last year’s equivalent model, the 46WL863. 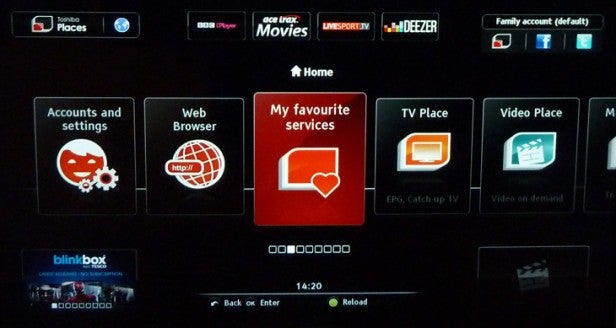 Also intriguing is the 47WL968’s shift to passive 3D from the active 3D system employed by its predecessor. Some – maybe many – folk won’t mind this shift given passive’s practical benefits when it comes to the cheapness of the glasses (you get four pairs free with the 47WL963) and the relatively relaxing nature of the passive 3D viewing experience. But resolution enthusiasts might feel that the shift to passive represents another ‘downspeccing’ move alongside the shift from AMR800 to AMR400.

Continuing this theme, the 47WL968 doesn’t apply local dimming to its edge LED lighting. This is potentially a pretty serious shift, as screens with local dimming consistently deliver much better contrast than those that don’t offer any sort of independent control over separate parts of the LED array.

Used as the main TV for the review period
Tested for more than a week
Tested using industry calibrated tools, discs and with real world use
Tested with broadcast content (HD/SD), video streams and demo discs
Next
Set Up and 3D Performance Review