Available on PC through Steam
You shouldn’t be able to compare a vast blockbuster created by one of the world’s biggest studios in nearly ten years of development with a game three years in the making from a much smaller name, but it’s to Torchlight II’s credit that you can. Calling it a Diablo III killer would be classic fanboy hyperbole, but Torchlight II looks and feels just as slick and proves every bit as addictive. There are areas where it can’t hold up to its bigger name rival, but also areas in which – surprisingly – it might actually come out on top. 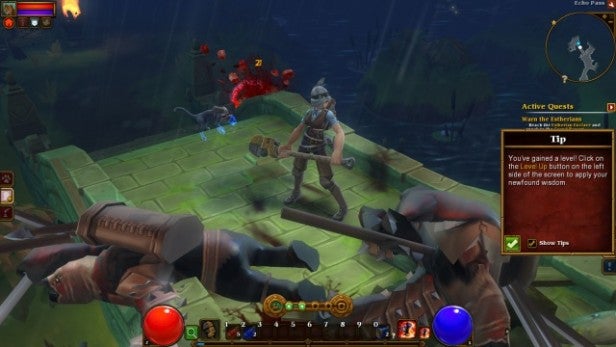 Torchlight Reloaded
Torchlight II builds and expands on the original Torchlight, just as Torchlight built and expanded on the work done by much of the same team for the unreleased Mythos and lead designer’s indie favourite, Fate. Like those titles, it’s a classic dungeon-crawling action RPG in the mould of Diablo, but where Fate and Torchlight were constrained to a series of randomised dungeons located beneath a small town, Torchlight II features a larger world with three acts, multiple settings, and a longer quest. The three playable classes of the original now become four, with the Destroyer, Alchemist and Vanquisher replaced by the Engineer, the Outlander, the Bezerker and the Embermage, all now featuring a limited amount of customisation. 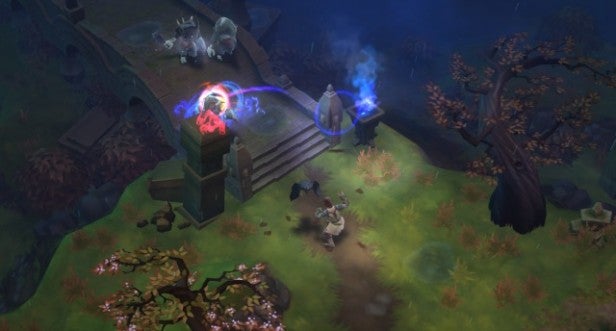 If you’ve played any of the Diablo games – not to mention Torchlight, Loki, Sacred or Titan Quest – then you’ll already be familiar with the gameplay. You play a lone hero, roaming through wilderness areas and dungeons, moving by clicking on the ground and fighting by clicking on a monster. Dead monsters mean loot and experience, while gold and equipment can also be gathered by opening chests, smashing urns and moving rocks. In hub areas you’ll find quest-givers who send you off to specific areas on specific tasks (though these invariably involve bashing and looting), and there’s some kind of story to keep you moving along. 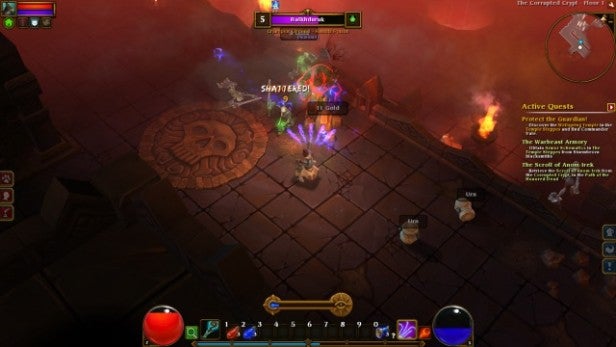 Positive Feedback
Of course, you don’t really play it for the story, but the continuous feedback cycle where you bash monsters to get experience, stronger weapons and tougher armour, that experience, those weapons and that armour makes you better at tackling bigger monsters, and so you just can’t wait to see what they can do, leading to more experience, stronger weapons and tougher armour. Frankly, these games are catnip to a slightly geeky mentality, not just because we can’t resist the dungeons and dragons clichés, but because we also can’t resist finding out whether Vampiric Axe with bonus poison damage is an improvement on Vorpal Blade with bonus fire damage. We just can’t hold ourselves back from the constant spec comparisons and upgrade cycles. 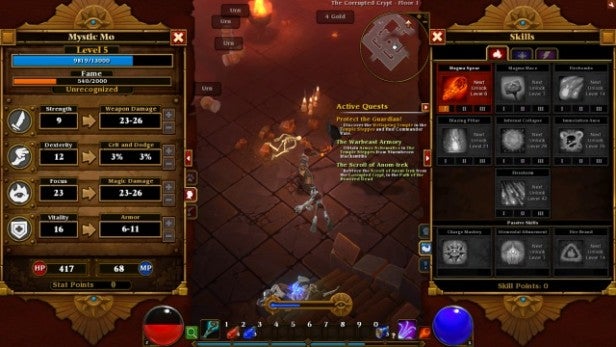 The good news, then, is that Torchlight II has a very satisfying feedback loop. Monsters look mean, but on normal difficulty levels can be smashed to pulp in droves, and the dungeons throw out loot and experience like The Daily Mail Online throws out stories about celebrity weight problems and soap stars in bikinis. You can barely go ten minutes without opening the inventory window to see if you could equip some better bracers or up your damage-per-second rating by some piddling amount. Everything has an exotic design and a ridiculous or convoluted name, and the idea of having armour sets that confer additional bonuses is a touch of genius – who can resist collecting the lot?

Meanwhile, the character classes and experience trees allow for a little extra depth. The Engineer is a heavy-hitting melee dude, but one made more interesting by his adoption of a pseudo-magical steampunk technology, while the Outlander is more your ranged weapons specialist. The Bezerker is your fast-paced, in-your-face marauder, while the Embermage is your classic, spell-throwing damage-dealer. Beyond the basic weapons, however, each has a range of secondary talents, allowing them to unleash heavy magical attacks or summon beasts or robots. Allocating points to your main attributes and selecting or unlocking skills with each new level, each class can be tailored to a bewildering variety of different builds. 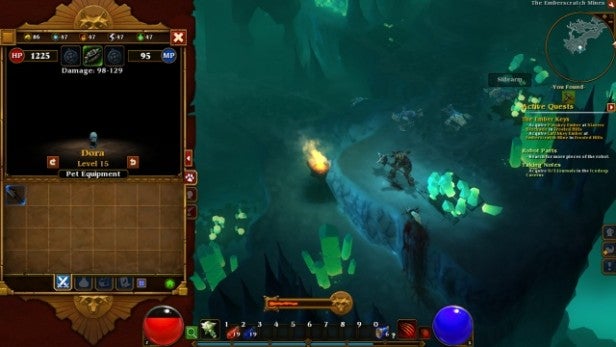 Pets win Prizes
And like Torchlight and Fate before it, Torchlight II provides you with a constant companion – though now you can have a wolf, panther, ferret or bulldog instead of the cat or dog of the original PC version. Pets play a number of roles, helping you fight, but also acting as a go-between you and the merchants in towns, selling your spare loot and returning with potions and supplies. Like Diablo III, Torchlight II doesn’t want to make you do anything that might pull you out of the action. You don’t have to slip out of a dungeon just because your backpack is full or you need to resupply, while mobile questgivers and generous waypoints keep backtracking down to an absolute minimum. 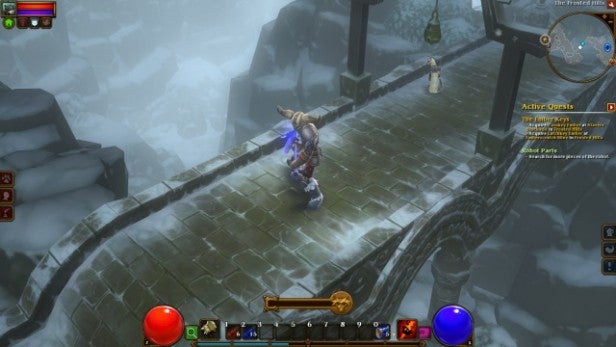 Visuals and Atmosphere
Diablo III has the edge on Torchlight II when it comes to levels of detail, the story and the brooding atmosphere, but in some ways Torchlight turns this to its advantage: it cares enough to deliver compelling reasons to hit the next dungeon, but it doesn’t take itself too seriously. There are flashes of humour and geek-culture references everywhere, and the visuals have a lighter palette with lots of big, sweeping, flashing effects. And if the look is a bit cartoony, then the landscapes still contain majestic vistas, and there are some superb artistic touches if you look. The dungeons are superbly paced, and while the combat doesn’t have the depth of Diablo’s more involved skill systems, you don’t really notice in the heat of battle. Torchlight II is just a whole lot of fun. 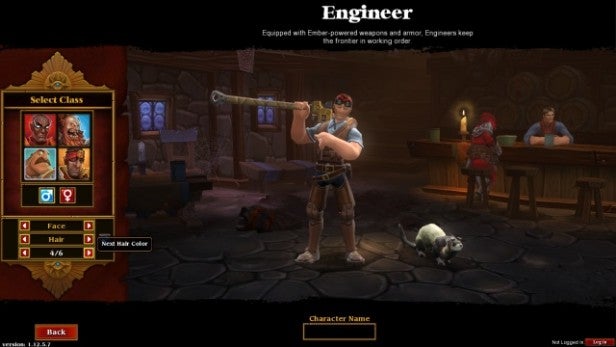 Online Play
That’s true when played solo, but double if you’re playing online with someone you know. Here we have a few grumbles. The game supports 2 to 6 player online action, but there’s no matchmaking – just a basic browser that gives you a rough idea of the level of the players involved. Loot is sensibly arranged so that you get your own share and don’t have to scramble for it, but all the same it’s a bit of an anonymous experience when played with strangers. With friends, however, we can imagine it taking off, and it’s possible to password protect games to stop strangers cutting in and taking spaces.

The icing on the cake is the price. You can buy one copy of Torchlight II for just £15, or gang together with three mates and buy a four-pack for £45. There’s no messing around with any always online nonsense, and the game plays well at high detail levels on fairly modest hardware (we’ve been playing it maxed out on a laptop with a mid-range mobile GPU here). This makes Torchlight II a bargain, whether you’ve had your fill of Diablo III or not. If you have ever enjoyed an action RPG, then you almost need a reason not to buy it.

Verdict
Torchlight II isn’t necessarily a Diablo III-killer, but it’s a beautifully crafted, hugely addictive and richly lovable rival. It’s a game full of colour and bold personality, with deep character advancement and masses of gameplay, and the introduction of online play only makes it better. At £15 it’s a steal, but find three friends and buy the bundle and you have one of the best deals in PC gaming.