It might end up being the year of the PlayStation 3 or Nintendo Wii, but at the moment 2006 feels like the year of games looking backwards.


Just think about it. Last week, we had a New Super Mario Bros. Before that we had the return of Sensible Soccer. Before that, we had Sin, an FPS that – gameplay wise – could have appeared in the last century, and Ridge Racer; a driving game that couldn’t be any more a stripped back arcade racer if it tried. And now we have Titan Quest: the nearest thing you’re ever likely to see to Diablo 3. 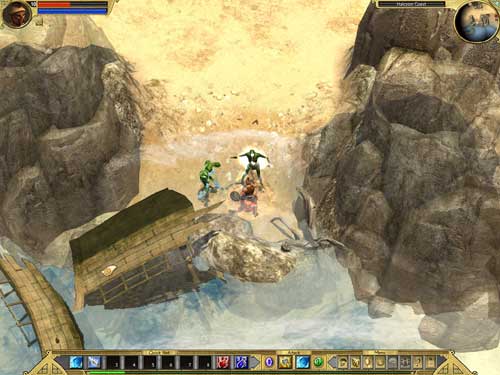 Of course, it looks a lot better than Diablo ever did. The team at Iron Lore has built a solid isometric 3D engine and used it to recreate Diablo’s core gameplay in a gorgeous world of ancient legend. The high-resolution textures, lighting effects and reflective surfaces are everything we would expect from a cutting-edge RPG, and the overall presentation is as slick and modern as it gets. Fantastically, much of the game is set not in grimy dungeons but the great outdoors, and from the swaying grasses to the knotted olive trees to the crystal blue seas rippling at sandy shores, the world of Titan Quest looks wonderful. It’s the Club Med of RPGs, offering exotic locations and beautiful weather to those tired of the usual green forests, medieval cities and misty mountain dungeons.


What’s more, there is genuine artistry at work here. Barring Sony’s mighty God of War, I can’t think of a game that works harder to bring classical myth to life. The settings are rich and beautiful, the monsters brilliantly designed and powerfully animated. In the initial Greek chapters, we get skeletons straight out of Jason and the Argonauts, satyrs, centaurs, demons, cyclops, maenads, minotaurs and medusae. If you grew up on ancient tales and a steady diet of old Ray Harryhausen movies, then you’re going to love this a lot. 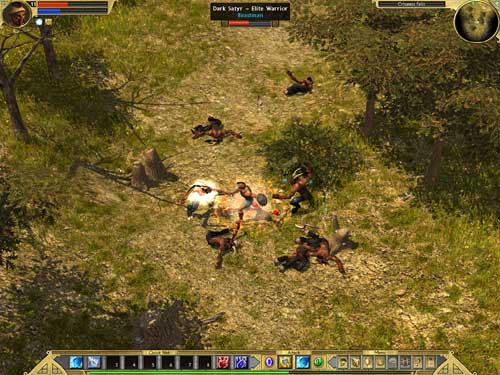 And while I’m here, I really should mention that the sound is great. We get atmospheric, context-sensitive music, and an impressive range of guttural battle cries, thumping, scull-crushing fight sounds and ominous off-screen noises. The clatter of skeletons rising from the soil is enough to turn your blood cold, while the sound of rushing water makes you ache for a quick dip – though that might just be the heat of this uncharacteristically warm British summer.


This raises two things. First, what does that mean, and secondly, is it necessarily a bad thing? Well, on the first point, it means that you can forget about complex RPG game mechanics, puzzle-solving, or sophisticated gameplay. Above all else, Titan Quest is concerned with one activity: cracking monster heads in enormous numbers. Aside from inventory management, 95 per cent of your in-game activity involves hovering the mouse pointer over an enemy’s head and clicking to repeatedly whack the poor goon until he dies. At which point, you move the mouse pointer to the next enemy and repeat as necessary. On occasion, you may use the right button to fire off a spell or use a special ability, and you will need to use the potion hotkeys to keep your health and magical energy topped up, but for the most part that really is pretty much it. 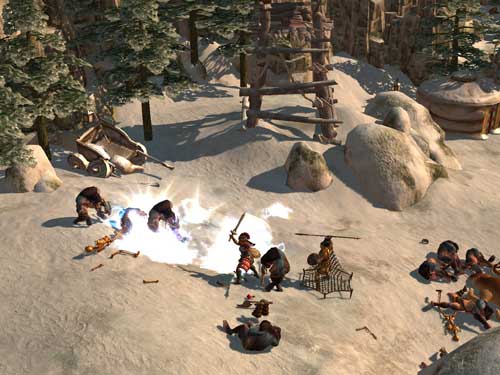 Character interaction involves clicking once on a handy informant or quest-giver to get a brief nugget of briefing or background exposition, and there are no documents to read, guilds to join, professions to pursue or patrons to court. What side quests there are almost exclusively concern – you guessed it – cracking more monster heads, albeit with slightly more interesting motives than the game’s standard “they looked hostile and were in my way”. I’d like to say things change as you move on from Greece to Egypt and China, but in all honesty they don’t.


Meanwhile, character progression is limited to levelling up (through the aforementioned causing of cranial injuries), allowing you to boost a handful of attributes and work your way through two of eight skill-trees governing a range of fighting, stealth and magical capabilities. You choose your first major skill area early on, the second a few levels later, and keep selecting and upgrading new powers as you progress. 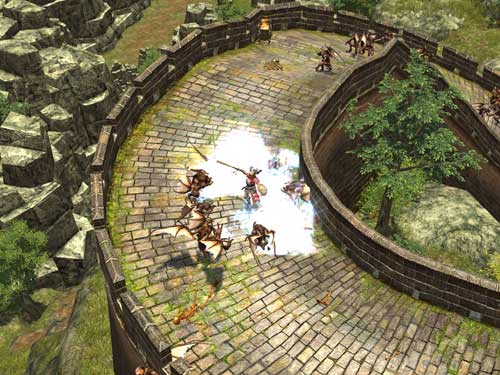 Admittedly, I am missing one major element out: loot, and the buying and selling of same. As you might expect, the world of Titan Quest is liberally strewn with magic and non-magic swords, shields, spears, bows, breastplates, bracers, rings, pendants and the rest, not to mention a sizeable amount of gold. Much of this is in the possession of monsters, who clearly have no idea what to do with said items beyond lugging them around or placing them in poorly defended encampments. In other words, you know the drill: bash the monsters, nick their equipment, open any chests, grab anything going, take back to nearby merchant, exchange for cash. Sometimes a monster may even carry or a chest may contain an item of weaponry or armour more effective than your current choice, in which case you may want to equip it straight away. And on occasion, you might find the merchant has something tasty that you simply can’t resist.

OK, so Titan Quest does improve on Diablo II in some areas. There are more towns and villages, and more of a sense of exploring a world, not just popping from dungeon to town to dungeon to town until all the monsters in the area have been eliminated. Titan Quest also plays smart in its portal system, which keeps you zipping from area to area at speed and without penalty, and in the way it treats death: you restart at the nearest checkpoint with health and energy maxed out, all possessions intact, and your only major problem being the hike from there to wherever you met your not-quite-end. Titan Quest also does some nice stuff with pets and summoned spirits once your skills reach a certain point. While you can use the Ctrl key to select targets there’s no need to micro-manage them – they’ll happily attack anything in sight with roughly the same amount of thought that you’ll exhibit. 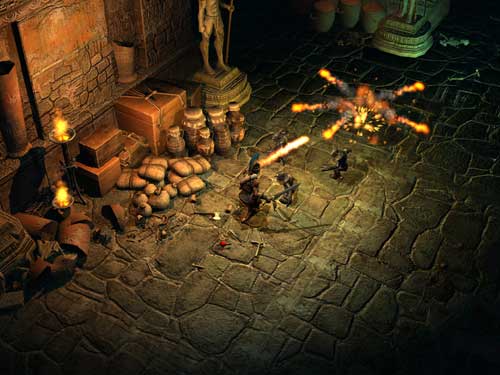 Get the basic idea? Now for the second point – does it matter? Strangely, for the most part, no. On paper, Diablo, Diablo II and now Titan Quest may sound boring, but in practice they feed our compulsive urge to batter beasties, level up, acquire new items and batter new beasties to death. It’s a kind of vicious circle; first you’re unwilling to stop because you’re just about to level up, then because you’ve just found or bought a new weapon and you want to see how much damage it can do, and then because you’ve just opened up a new area and what you want to see what or whom lurks within (and how soft its skull is). And just when you achieve one aim, another one turns up. 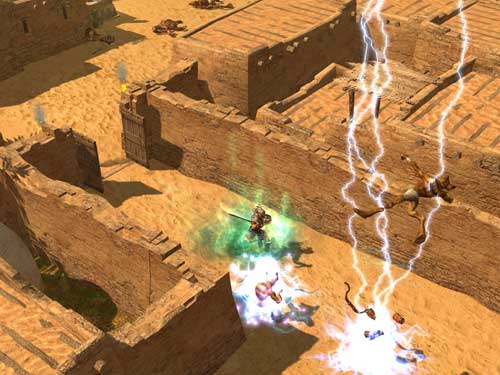 During my many hours of playing Titan Quest, my conscious mind was constantly informing me that it was repetitive and slightly boring, but every time it was too late: my unconscious mind had taken over, and was leading me towards the next monster lair in search of treasure. Titan Quest is the kind of game that drains evenings and weekends one hour at a time, and when you come away you’ll wonder why. But then, when you’re weak, that insidious idea enters your brain once again; why not fire up Titan Quest? Just a quick game, what’s the harm?

Well, there isn’t any, but that doesn’t mean there aren’t better, more rewarding ways to spend your time. Titan Quest rarely gives you the dramatic highs or lows of a genuinely brilliant game. It never asks you to think, never stretches your imagination and never really makes you pause in wonder. It simply keeps you entertained in a blizzard of clicks and inventory screens. Despite talk of a Hollywood connection – Braveheart writer Randall Wallace apparently worked on it – the narrative is little more than a series of thin premises to keep you shifting from Greece to Egypt and China, and offers precious little reason to continue in itself. And while there is a well-worked online multiplayer mode, it’s nowhere near as engaging as Guild Wars or any other decent MMORPG. Like Diablo, it’s more like a cross-between an RPG, Gauntlet, and a supermarket sweep, where players are more likely to race for the loot than charge into combat at your side. 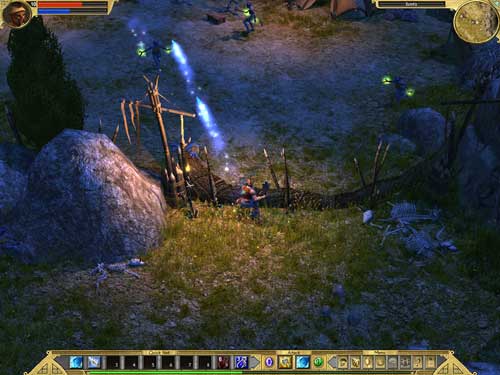 So there you have it. Titan Quest is a ridiculously addictive habit, but like most ridiculously addictive habits it’s one you should think carefully about before acquiring. It’s fun, well-designed and beautifully streamlined in the sense that it’s rarely unfair or annoying, but I can’t help thinking that it might be too big a deliberate step backwards. This year’s best retro-thinking titles – New Super Mario Bros, Ridge Racer 6, Sensible Soccer et al – succeeded because they offered simple, fast-paced entertainment in genres that have grown too complex or too staid. But with the RPG, I’m not sure that’s the case. So, just sit back and think before you go out and blow £20 and forty hours on Titan Quest. After Morrowind, Oblivion, Guild Wars, Baldur’s Gate, Knights of the Old Republic, Fable and World of Warcraft, do you really want to go back to Diablo II?


A slick, gorgeous looking and entertaining Diablo clone, but in the end that’s all it is. While ludicrously addictive, it’s not the deepest or most rewarding RPG in town. 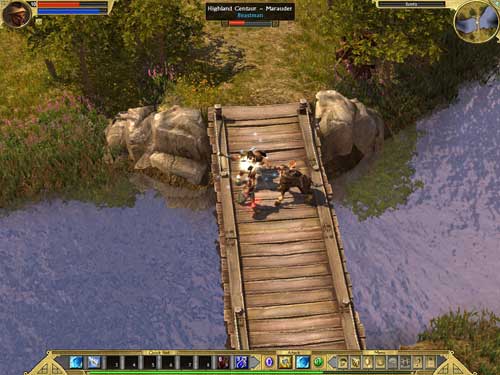