What is the Thrustmaster T300 GTE?

The Thrustmaster T300 GTE is a force feedback racing wheel, one of the first to offer PS4 support.

Among game accessories, few come with as much burden as a proper force feedback racing wheel. As well as being big, heavy and usually prone to littering your lounge with yet more wires, you need something to keep them steady to get anywhere near the best from these often quite powerful bits of hardware. New to the game? Wheels like the Thrustmaster T300 GTS are a pain.

But they don’t half make racing games more fun.

The question is whether the T300 GTS can match up to the force feedback heroes of the last generation, including the Thrustmaster T500 RS and Logitech G25/27. And whether it’s worth £300 despite lacking a clutch and a separate gear stick. 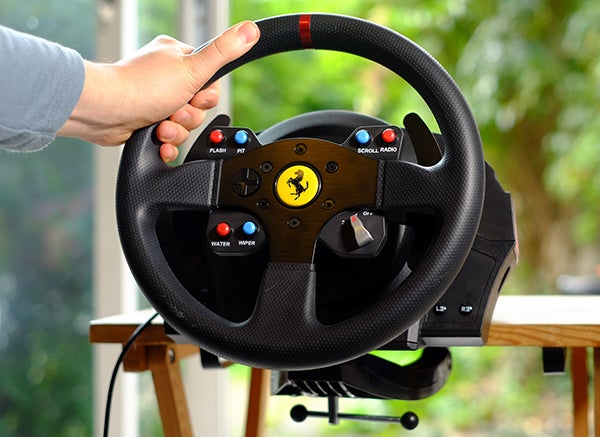 Those familiar with these kinds of accessory already know this, but there’s something new about the Thrustmaster T300 GTE too. It’s one of the first high-end wheels to offer PS4 support. Much to the chagrin of racing fans, almost all existing high-end wheels won’t work.

Why not? Sony’s software requires third-party hardware to have an additional security chip, believed to be a measure to stop the PS4 from being hacked. Fair enough, but it has left a good few Logitech G27 owners hacked off. 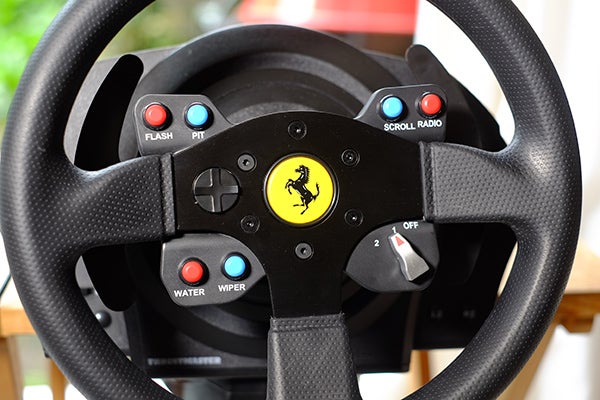 Those looking purely for a PS4 wheel should wait for our review of the Thurstmaster T300 RS, a more console-centric version of this same wheel. Carry on reading for the force feedback and handling impressions, though: they’re otherwise fairly similar.

As it is not directly tied to a console, the Thrustmaster T300 GTE doesn’t have to offer a particularly familiar gaming button layout. There’s a D-pad, but the rest of the controls are marked with car ‘dashboard’ functions, not ones that mimic a keyboard or gamepad. When testing with the PS4, we’ll admit it took quite a while to figure out exactly how to get the console to ‘see’ the controller, but the learning curve is a brief one (pro tip: press down the flicker dial to the bottom-right, it acts as the PS button). 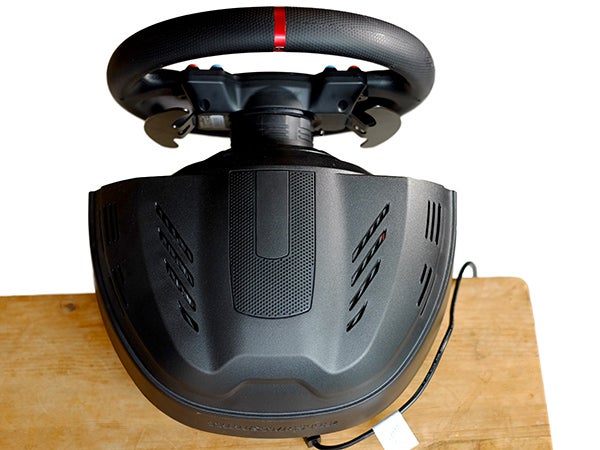 Aside from the rather cheap-feeling D-pad, the Thrustmaster T300 GTE’s buttons feel fairly high-quality, and offer particularly good mappings with PC SIM racer titles. We had no troubles playing the Gran Turismo games on PS3 or DriveClub on PS4 either (aside from the little start-up gaffe on the PS4). As you’d hope, mappings have been pre-applied, likely shared with the older Thrustmaster T500 wheel.

Setup is fairly day too. The dual-pedal board plugs into the wheel base using an Ethernet-style cable, with single power and USB ports to connect from the base.  The wheel comes with a screw-in mechanism to let you attach the base to a table or stand. And you will need one. 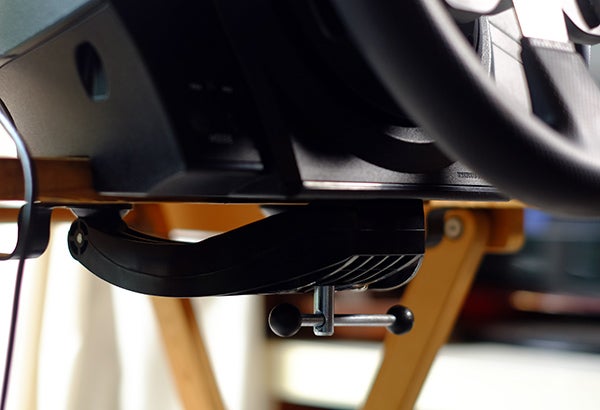 The Thrustmaster T300 GTE wheel detaches from the base, and you can use ones already released for the the T500 – you can get an F1 style wheel for that model. As it costs an extra £90, buying one means slipping into a new level of racing nerdcore, but one of these high-end wheels gets you something you can use for years, not weeks.

As part of the package you get a rubber-topped ‘normal’ wheel, 11-inch wheel. This is roughly the size used by all the top wheel-makers, and is a size used by real cars too. It’s big enough to feel legit. 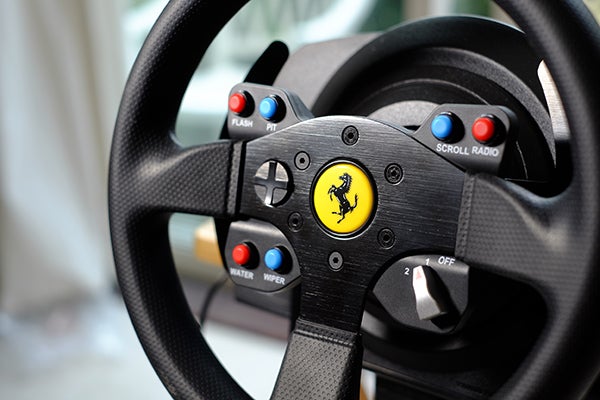 However, we don’t think the covering Thrustmaster uses drips quality in the same manner as some rivals. Rubber is a practical choice, but next to the real leather of the Logitech G27 and the soft touch Alacantra of the old classic Fanatec 911 Xbox 360 wheel, it seems pretty tool-like. Not much ceremony for your £300.

The ‘seam’ on the underside of the wheel is also a little pronounced. None of these criticisms really have anything to do with build quality – the Thrustmaster T300 GTE wheel frame still feels like it has a good chance of outliving you, but it just doesn’t feel luxurious.

It’s meant to be a replica of the Ferrari 458 wheel, which uses… that’s right, a leather covering. 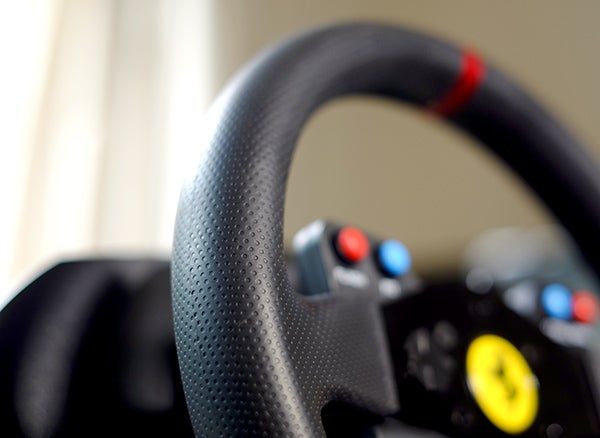 The wheel is well-made, but not luxurious

Steering is less ‘notchy’ than the Logitech G27, but there’s still a little bit of this effect in place. Very few force feedback racing wheels are entirely smooth when turned, but we had hoped to see a bit more progress here. It seems at best on par with the slightly older T500. Rotation goes through a full 1080 degrees, and can be stepped-down in the software in, for example, F1 games to match real-life conditions.

Gears are built into the wheel itself. You get two metal paddle shifters, with a very clear – if slightly noisy – clicky action. 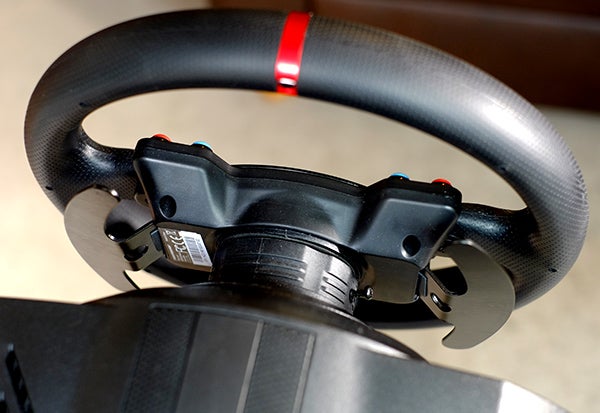 The most obvious change is the new pedal board. This one is simpler and a lot humbler. It uses metal-topped pedals of varying tension, but the base and mechanism are plastic and fairly light. And there’s no clutch pedal. 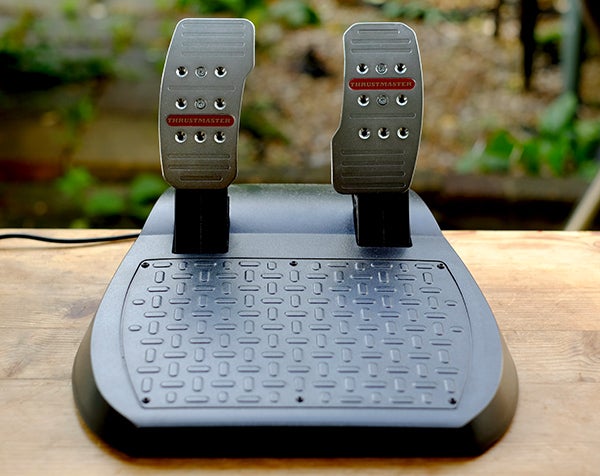 We found that as it’s on the lighter side, the Thrustmaster T300 GTE needs a bit of extra securing or at least a high-friction surface, to avoid slipping if not locked into a stand. There are little rubber feet on the bottom, but they don’t quite do enough to keep the base in place when you’re desperately trying to keep your car in control while driving around a corner at 65 mph.

In this respect, they’re pretty similar to the Logitech G27 pedals. Passable, but not truly impressive. 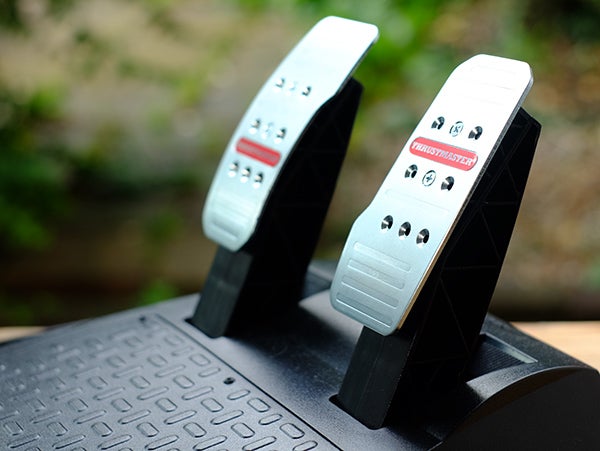 Given the Thrustmaster T300 GTE seems to have an ‘ultimate racing wheel’ price, you might be a little disappointed with some of the hardware shortfalls. But we were very happy with the quality of its force feedback.

The motors in the wheelbase are very strong, providing that feel of wrestling with the car when the feedback effect is ratcheted-up. This wheel also offers a slightly different motor style to the older Trustmaster T500 too. The T300 GTE uses a brushless motor, more efficient that the brushed motor in the older model.

While we unfortunately didn’t have the two models at hand for a side-by-side test, the power and speed on offer in the Thrustmaster T300 GTE is really quite impressive. Likely at least on-par with the T500, and slightly greater than the Logitech models. With the implementation of feedback in the software, the results are fantastic. 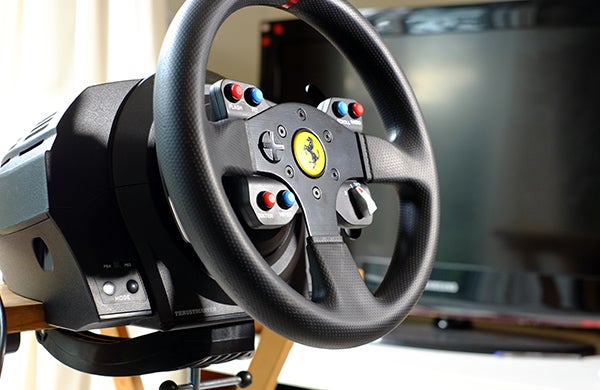 This wasn’t our test setup: a rickety wooden table probably won’t do

This is where we come into an issue for PS4 owners. We don’t think force feedback in DriveClub – currently the platform’s premiere racer – is on-par with either of the PS3’s Gran Turismo games, or the top sim racers you can get on PC. Using a wheel does make DriveClub a lot more enjoyable, but we think the best is very much yet to come for PS4 force feedback experiences. Gran Turismo 7 may not arrive until 2016.

There’s one more hardware issue to note, too. The Thrustmaster T300 GTE uses internal fans to cool down those powerful motors when they get a bit worked-up. With force feedback set to max level (something you do in the game rather than in the hardware), the fans kicked in within about 20 minutes play. 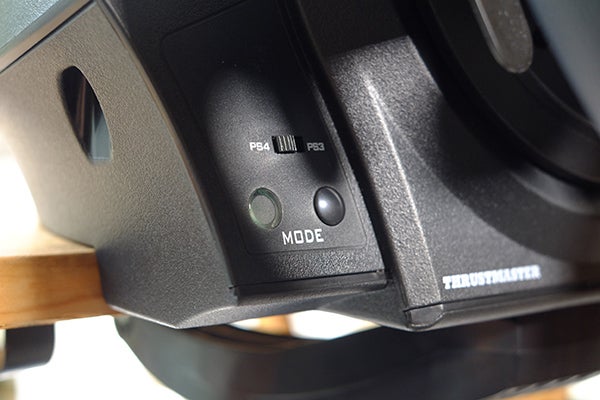 The fans are fairly loud too, roughly on-par with an Xbox 360 straining away at full pelt. If you play games at fairly low volumes, it is pretty apparent. And will definitely annoy some of you.

Of course, it’s a pretty sensible precaution. Without a fan, the Thrustmaster T300 GTE would be prone to overheating if played for a good stretch – and the only option would be to apply an auto switch-off at a certain temperature. And if that was while you were half-way around the Nürburgring, it’d be a lot more annoying than a whirr. 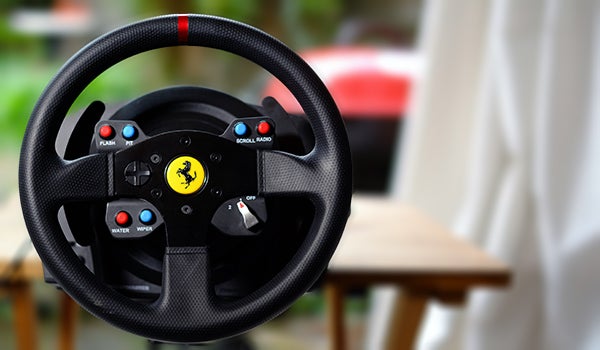 Should I buy the Thrustmaster T300 GTE?

The Thrustmaster T300 GTE is a great racing wheel. Yes there are issues, but it provides just about everything we look for in a force feedback model.

However, it’s not quite the perfect solution for many people. If you’re a PS4 gamer, consider getting the Thrustmaster T300 RS model, which has a much more PS4-like control layout. We should note, though, that you can also control the PS4 with this model, not just play racing games – you just have to learn which button does what.

We think that the serious PC racer may not be entirely happy with the Thrustmaster T300 GTE pedals either. The T500 set is much better. But as that set is not available separately (as far as we can see) outside of the second-hand market, and the older set doesn’t support PS4, there’s no perfect solution out there, yet.

A final note: for those new to force feedback wheels, do not just buy the Thrustmaster T300 GTE without considering where you can mount it. No, your lap will not do. We used the SpeedBlack stand during testing. Other options include the WheelStand Pro and a good sturdy table, with a rubber matt underneath.

The Thrustmaster T300 GTE is a great racing wheel for PS4 and PC gamers, if not one that’s really leap forward beyond support for Sony’s latest console.