Available on PS4 (tested) and Xbox One

Living in the shadow of war is something I’ve always hoped never to have to experience, and I feel that way even more so after playing This War of Mine: The Little Ones.

Unlike other games’ portrayals of war, you won’t see any missiles here, no falling bombs, no storming of beachheads. In fact, you won’t see much of the war at all. You might occasionally have to shoot or stab someone, but it’s an experience that isn’t an adrenaline rush; it’s a fight for survival.

This War of Mine isn’t about the horrors of war in that sense. It’s about the very essence of life itself. The hunger, the hurt, the pain. About finding shelter and somewhere to safely rest your head.

And This War of Mine: The Little Ones has all of those things. 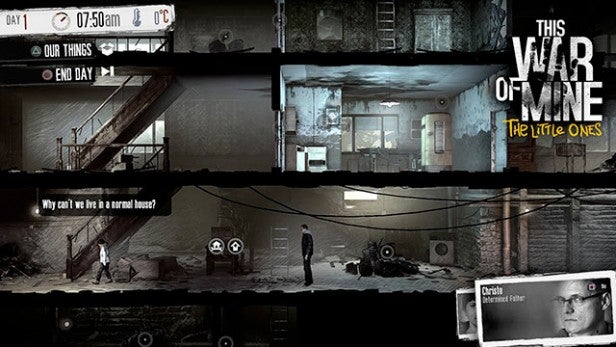 Your ultimate goal is to survive, which actually means finding enough food to keep all your residents from starving. You’ll also need to protect yourself from any scavengers, find medicine and supplies to heal your various ailments. There’s so much to think about when you start that it can all seem a bit daunting.

And that’s exactly what developer 11-Bit Studios wants. It’s managed to create a simulation experience where every decision counts, and you’re given very little guidance as to what to do.

I made many mistakes at first, consuming food that actually would have been better cooked, and wasting precious medicine on someone who would’ve got healthier with a good night’s rest. It’s a steep learning curve, especially when you come to feel so passionately about the people you’re trying to keep alive. 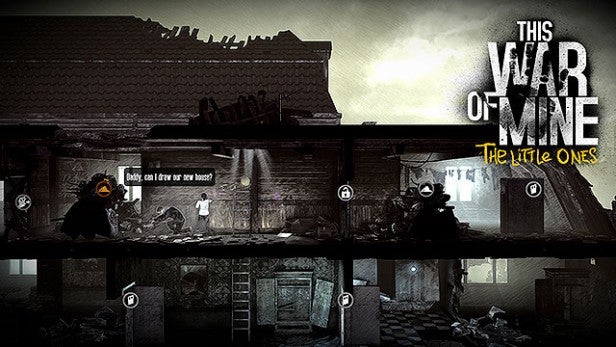 Most of the action takes place in a rather derelict building that offers some of your elemental requirements, and plenty of space to build a basic home. You’ll need to dig through piles of rubble, clear space and discover the few secrets that lie within. But you’ll also have to think about building beds and chairs to provide comfort, a stove for making meals and other necessities.

After all, making sure everyone doesn’t have a rumbling belly each day is actually quite a challenge if you can’t stroll down to your local Waitrose.

Upgrading your workbench will get you access to better items to craft, but you’ll need to make sure that you’ve got all the parts needed to build and improve before you can do anything. Once you start doing that, you’ll be able to provide better for your people, access new areas and defend your home against anyone trying to get at it.

It helps that your home starts out inhabited by three men to begin with. Each one has a different backstory and strength. One might be an excellent cook, while another is a skilled scavenger – a trait that you’ll come to treasure and strive to protect.

Each night you’ll want to send out said scavenger to one of the various locations surrounding your home. It’s here that you’ll discover supplies that vary from vaguely useful to life changing. It’s up to you what you bring back and how you get it. That’s because while some areas will be abandoned, in others you’ll come up against others trying just as hard to survive. Some will want to barter and trade, while some will be more hostile.

How you react is up to you. And that’s when remorse suddenly becomes a gameplay tactic. How badly do you feel about taking out a fellow survivor who didn’t want to share that medicine you so needed. How awful would you feel if you forgot to swap back to scavenge mode from attack after you’d just finished negotiations with a poor chap and managed to stab him to death by accident? Stealing food from an old couple and being chastised on your return to camp can make you feel very guilty indeed.

And if you happen to lose one of your struggling survivors? Well, it happened to me, and I felt so awful and irritated I had to turn the PS4 off for a bit to cool down. 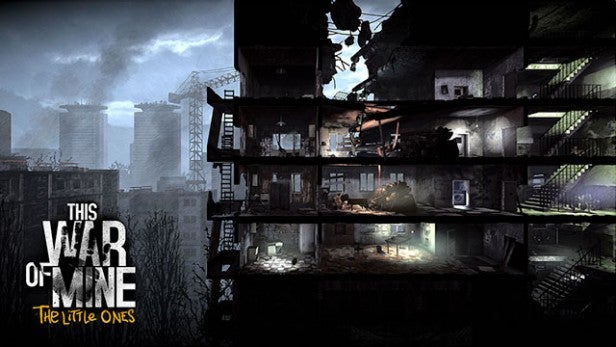 These emotions also feel so much more intense where there are children involved. The PS4 and Xbox One versions of This War of Mine (the original was released in November 2014 for PC and in July 2015 for tablets) sees the addition of the “The Little Ones” subheading because it explores how the addition of children in this warzone environment changes everything – for better and for worse.

For me it started with the treehouse in the garden, a clear differentiator from the original version, followed by a man coming to the door. It took a while for him to arrive, the tyre swing moving slowly in the breeze just waiting for a sitter.

The man came baring a young boy who needed a place to stay for a while. He’d become disconnected from his family in the war and needed a place to call home, at least temporarily. My little clan welcomed him with open arms, despite the dwindling food supplies. He was just happy to have a place to keep his things out of the rain.

And he quickly helped lift spirits a bit. Days that had been spent searching the radio broadcasts for news, sleeping or sitting in ramshackle chairs feeling hungry now had a bit more purpose, in that now we had to find ways to distract and amuse the little one.

He soon started scribbling on the walls, singing as he skipped around the house and even refusing to do any kind of manual labour… Sounds like quite the normal kid.

The children also help you get even more emotionally involved. Everything that happens in the house affects them much more audibly and visibly, to the point your once quiet and functioning home is filled with sobbing.

Related: PS4 HDD Upgrade – How to upgrade your Xbox One storage 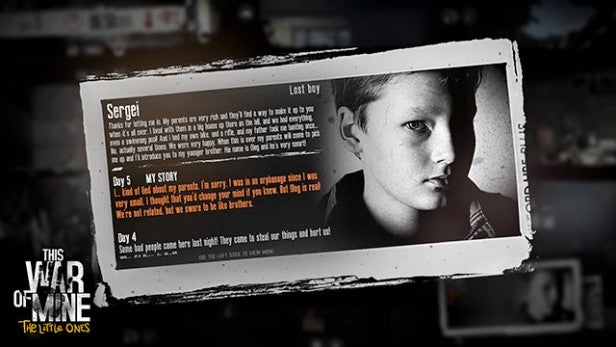 It all keeps you occupied for a while. You build a home, create ways to collect water, grow food and keep everyone warm and comfortable. But then it dawned me that This War of Mine could go on forever. The days and nights start to become one long monotony, no matter how much I was emotionally invested in my little thrown-together family.

What doesn’t help is that there isn’t that much to do during the day, once you’ve fed everyone as much as you can and made sure you’ve collected your various utilities. But I suppose that’s the inevitable fact of war. There’s a lot of waiting, uncertainty and ultimately no guarantee that you’ll see another day.

The game really comes alive at night when you’re scavenging, worried in the dark that something is lurking at every turn. Stealth mechanics and movements are a bit shaky, but what more would you expect from an untrained civilian? I know I’d be utterly useless, despite my videogaming prowess.

11-bit Studios has designed a clever simulator for the little-told stories of war, but the lack of emotion from the characters themselves almost limits the ultimate impact it has. The diary entries and the scribbled notes from the radio, other survivors and the not-so-lucky gave that awful pang to the heartstrings at first, but soon I was wondering why my survivors were so mute.

Verdict
But ultimately I’ve invested so much time in this game that my few niggles are also rendered mute. 11-bit Studios has created an exploration of the desperateness of wartime human experience and made it into something you can’t help but find compelling. The addition of children into the original mix is a way of enhancing that, making the reality all the more visceral.

And what’s interesting is that This War of Mine: The Little Ones is also a joy to play, despite its bleakness.