Available now on PC and Mac

I like to gauge the additions to the Sims by how crazy I can get with new content. It’s probably not the fairest metric to use, but it’s a game that allows you to block your Sims inside the walls of your house and starve them, so it feels fitting. Freedom reigns, problems are dealt with and hilarity ensues. So, when I found out I could romance the game’s version of Santa Claus – named Father Winter, for various reasons – I decided that this expansion might just be the best thing to hit the franchise for some time.

I prepped my house, put up the festive decorations, invited my friends over to a grand meal. We shared presents and holiday cheer, which met the criteria for a successful Christmas ensuring happiness for my Sim. Eight O’Clock rolled around and Father Winter appeared at the fireplace, bearing gifts. My friends had just left, thanking me for a lovely evening and so I invited the jolly fellow for dinner. Let’s just say that dinner was a success and we met up the following day for a date, him still wearing his fancy Christmas outfit.

It’s all rather preposterous, but such is the beauty of the base game. Seasons hasn’t gone out of the way to add a great deal of content compared to other expansions, but what there is rounds out the life of a Sim very nicely. After all, life comes with reasons to celebrate and Seasons does all it can to offer these options to the player. Interestingly, the length of a season can be set in the options menu, allowing for long periods or shorter bursts. The latter somewhat takes the enjoyment away, however, because the celebrations and special days stack up too closely. The default is seven ‘in-game’ days, which fits nicely. 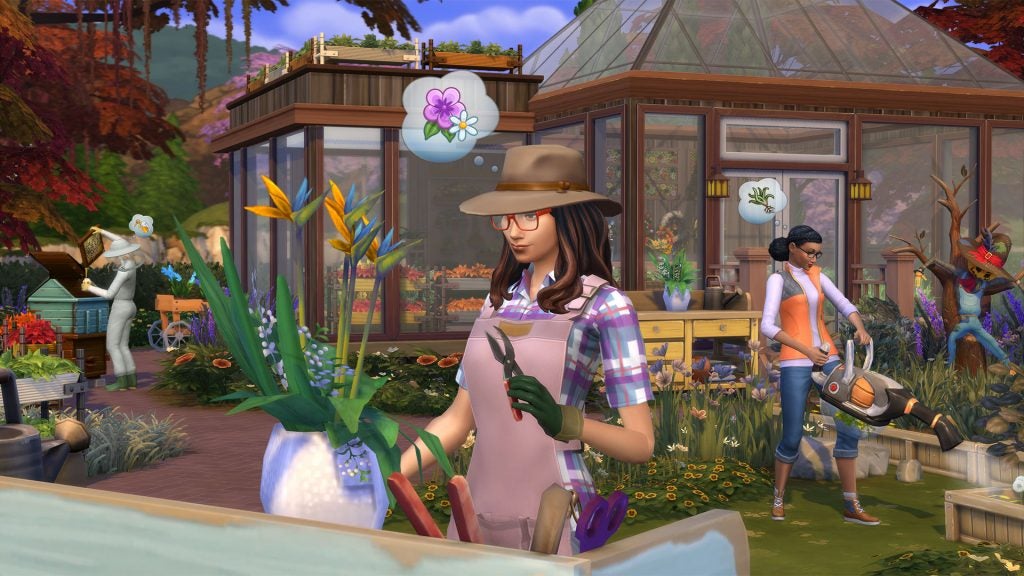 Choosing which season to start in is a lovely touch, meaning the ability to save a favourite until last is possible. I started with Spring because it seemed the obvious choice and watching the flowers bloom around the garden was uplifting. Taking advantage of the new gardening career, I abandoned my career goals of becoming an astronaut and decided that flower arranging suited me better. The weather system has a direct impact on your Sim, making them a little more well-rounded; they can now get too hot or too cold and this is reflected in their mood. When a storm rolled in towards the end of Spring, my Sim became scared of the thunder, which caused a spike in grumpiness as he missed out on sleep.

Taking him outside the following day to jump in puddles with a friend perked him up though and soon Summer rolled in, bringing more flowers and better weather. Between trips to the park for water balloon fights and collecting honey from my new beehive – which I sold for an extortionate price – Summer felt that it passed quickly and showed little compared to other seasons. Investing money in a roller skating rink for the garden proved a success during barbeques and would, later in the year, double up for ice skating.

Fall crept in, as it tends to do, creating piles of leaves to jump in… or even ‘WooHoo’ in. The nights began to draw closer and my Sim got colder, again affecting his mood. Adjusting the temperature of the house seemed to help, as did an Autumnal romance and successful Thanksgiving. Each of these celebratory days requires certain goals to be met and doing so will improve various stats of your Sims. There’s a running theme of decorating the house, which is done via a stack of boxes mimicking the kind our parents keep in the attic. Clicking this will festoon the house appropriately, leaving the other tasks – usually chatting with guests, cooking a grand meal or, specific to Harvest, praising Gnomes. Of course, a little silliness had to creep in, and waking up on the game’s version of Thanksgiving will see gnomes scattered around the house. The option to praise them by leaving treats out is prompted, but I decided to kick open the gnome and steal the treats inside their terracotta forms. I wish I hadn’t. The rest of the day was a disaster as ghost-like gnomes followed me everywhere breaking my appliances and generally causing chaos.

Then Winter came and my moment with Santa was approaching. I spent time making snow angels, building snow pals and having snowball fights – which reused the water balloon assets – before Christmas rolled around. The snow was severely impacting my days and the longer nights didn’t help my generally extroverted Sim. However, Christmas was a success, I had Santa’s phone number and it was soon New Year, where we’d have our second date.

Of course, EA has added a plethora of other new items that aren’t holiday themed. There are new clothes, hairstyles, objects for the house and these are all very lovely if you feel the need to renovate. Where Seasons stands out, is in the way your Sim begins to react with the environment – their breath misting in the cold or them needing to shower more often in Summer. It’s lovely to watch the snow fall and rejoice in childlike play, then watch as the Sim becomes uncomfortable in soggy clothes. For a Sims fan, this is a no-brainer expansion.

Seasons makes the Sims more of a simulation and that can’t be a bad thing. You could grumble that more items could have been included or other events were added besides festive holidays, but EA has effectively overhauled the personality of your creations in tiny ways while introducing new actions, ways to interact and design ideas for the home. Plus, you can ‘WooHoo’ with Santa and surely that will put us on the nice list?