There's only one set of controls for the four slices, which is unusual, and the Tefal Loft 4-Slot Toaster has small slots only suitable for smaller slices of bread. Those limitations aside, this is a toaster that produces quality results, with very evenly toasted bread.

What is the Tefal Loft 4-Slot toaster?

The Tefal Loft 4-Slot Toaster is the latest addition to the company’s range of breakfast appliances, created in collaboration with product designer Seymourpowell. While the design is eye-catching, if a little too plasticky-looking for my taste, note that this toaster has only one set of controls. Most four-slot toasters, such as the Dualit Lite – as well as Tefal’s previous toasters – have two.

What’s more, most standard supermarket sliced bread will stick out of the Loft toaster when placed vertically – and it’s difficult to find bread that will actually fit the toaster sideways. If you do manage to find a slice of bread that fits, however, the Loft does deliver some of the most even browning results I’ve seen. 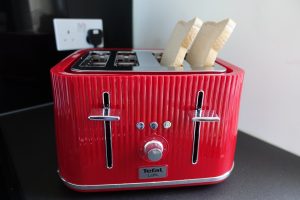 According to Tefal, the fluted glossy finish of the Loft toaster is inspired by British ceramics. Available in Cherry Red, Pure White and Noir Black, the toaster is encased in a plastic body that’s slightly narrower up top than at the bottom. I reviewed the Cherry Red version, which to me looked more “post box” than “cherry” – which, of course, makes it all the more British.

A faux-metal plastic strip runs around the bottom of three sides of the toaster. The levers, buttons and the browning control dial all sport the same finish. While the design appears minimalist and pleasant in photos, it feels a tad plasticky in reality. The silver-coloured coating on the levers and buttons looks as if it may flake off over time.

Interestingly, the Loft toaster features only one set of controls for its four slots. More typical of four-slot toasters these days is to have two, one per two slots, allowing you to simultaneously toast four slices of bread on two different browning levels. 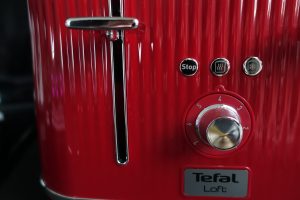 The latter is good for families who prefer their toast cooked different ways. However, if everyone is happy with one specific level – or one type of bread; different types of bread often require different settings – the Loft toaster is convenient to use.

The Stop button will light up whenever the toaster is in use, reminding you that you can cancel the toasting process at any time.

The browning level dial sits below the buttons inside a circle of numbers, 1-7. There are four increments between each number, meaning you can fine-tune your bread to toast at setting 3.8 or 4.2, if you like. 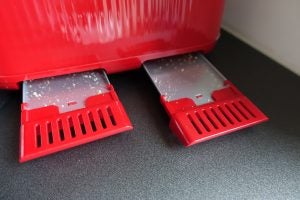 The slots are a decent 3.5cm wide, and the inner mechanism will adjust to the thickness of your bread. However, during my tests, I discovered the slots are very short – about 13.8cm (more on that later).

As a four-slot toaster, the Loft takes up a chunk of countertop space, measuring approximately 29cm wide, 28.5cm deep (with the levers sticking out) and 19cm high.

At almost 90cm the cable is a generous length, leaving around 75cm trailing behind the toaster. Should you find it too long, there are hooks for cord storage on the underside of the appliance.

At the rear of the toaster you’ll find two removable crumb trays. While the Loft toaster comes with a safety information booklet, there’s a series of straightforward instructional diagrams on the inner lid of the cardboard packaging. 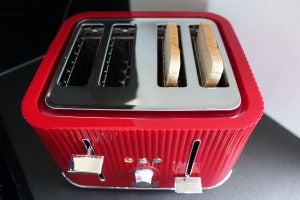 Tefal Loft 4-Slot toaster – What’s it like to use?

On the first use, the diagrams advise you to run the toaster without any bread three times. Since most manufacturers usually recommend you to do it once, this seems excessive. However, I did notice the toaster emitting smoke during the first two runs, so this may be entirely reasonable.

The toaster’s sides become quite warm following the three initial consecutive turns – but I didn’t detect any noticeable extra heat in normal use. As is the case with most toasters, the sides of the Loft were only vaguely warm after toasting. 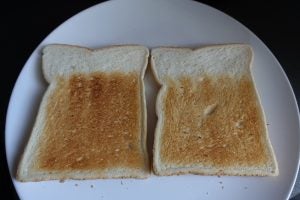 I toasted some medium-sliced white bread, which turned out to be a little large for the toaster, protruding from the top. I had to place the bread vertically, as it wouldn’t fit in the toaster sideways.

Starting with a cold toaster, this took around three minutes on setting 4. The bread was toasted evenly, with the usual grill lines barely visible. But, nearly 4cm from the top of the slice remained light and slightly soft, since it wasn’t actually inside the toaster.

One way around this would be to run the toaster again on a lower setting – such as 1 or 2 – placing the slice upside down or sideways (as the bread may have shrunk enough to fit in the toaster now). But this means you’re more likely to burn or dry out the toast – not to mention the extra faff! 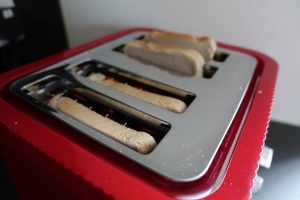 So it’s easiest to buy smaller-sized bread, which is likely to mean going for bigger names rather than the average supermarket own-brand loaf. I just about managed to skirt the issue by using slices from near the end of a loaf that tend to be a little smaller – and even then a little twisting and cramming was required.

I toasted four slices at setting 4, with two placed vertically and two horizontally. The horizontal slices had better overall brownness, while the vertical slices were about 3cm untoasted from the top. 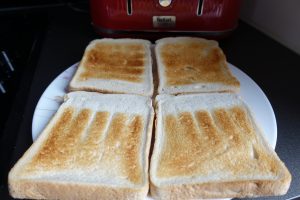 I then toasted some wholewheat bread at setting 3, which definitely heated the bread, but failed to create much browning in 2mins 10secs. Setting the toaster at 3.4, it fared much better at 2mins 55secs.

As such, I’d only recommend placing your bread sideways if it actually fits. If there’s any shoving involved, the bread can end up at an angle and therefore fails to toast as evenly. 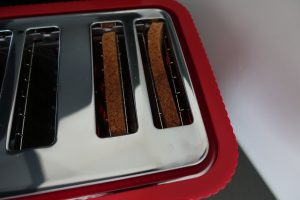 Frozen bread was my next challenge. My first attempt with frozen white bread was at setting 4 with the Defrost function; it turned out a bit pale and still chewy.

Setting 5 and the Defrost function took around 3mins 25secs, resulting in uniformly toasted bread. Interestingly, though, toasting frozen bread at setting 5 without activating the Defrost function turned out similar results. The size of slice was particularly an issue with frozen bread, since the untoasted tops of slices remained soft and even a bit soggy after toasting. 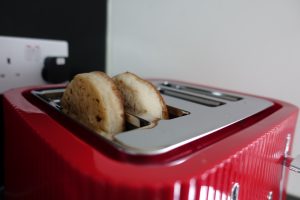 The Reheat function proved handy to restore the crispiness of previously cooled toast in 30 seconds.

Finally, I turned my attention to crumpets, which turned out nicely crisped on the outside in 3mins 25secs on setting 5. Since the toaster has quite a high lift, the crumpets were very easy to place in the toaster and to remove without burning my fingers.

While the high lift means your bread will hang out quite a bit when the levers aren’t down, the springs here aren’t so powerful as to throw your toast across the other side of a room. Even a single Pop-Tart managed to stay in the toaster. 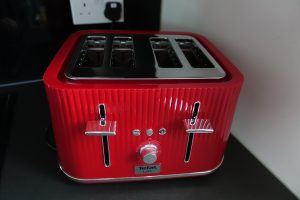 If you’re happy only toasting small slices of bread, crumpets and the like, the Tefal Loft 4-Slot toaster offers even results. But if you prefer relatively standard or bigger slices of bread, then you may need to look elsewhere on our Best toaster list.

The Morphy Richards Evoke 4-Slice toaster is slightly cheaper and has two sets of controls, allowing you to toast your slices of bread at different settings concurrently. Meanwhile, the pricier Dualit Lite 4-Slot toaster also comes with a function for toasting bagels.