Sonic & All-Stars Racing Transformed was a phenomenal kart racer, expanding beyond the blue blur’s universe to embrace nearly every major property SEGA has worked on in recent years. Racing alongside Football Manager and Shenmue’s Ryo Hazuki was a surreal delight, enhanced by a range of tight, responsive mechanics that even gave Mario Kart a run for its money.

When Team Sonic Racing was unveiled, my interest was immediately piqued as a result. Could this be a worthy follow-up to Sonic’s previous racing endeavour, or will it prove to be another lacklustre entry in the hedgehog’s fractured legacy? I’m bummed to say it’s the latter, as a smattering of clever ideas can’t stop this racer from being anything more than passable. 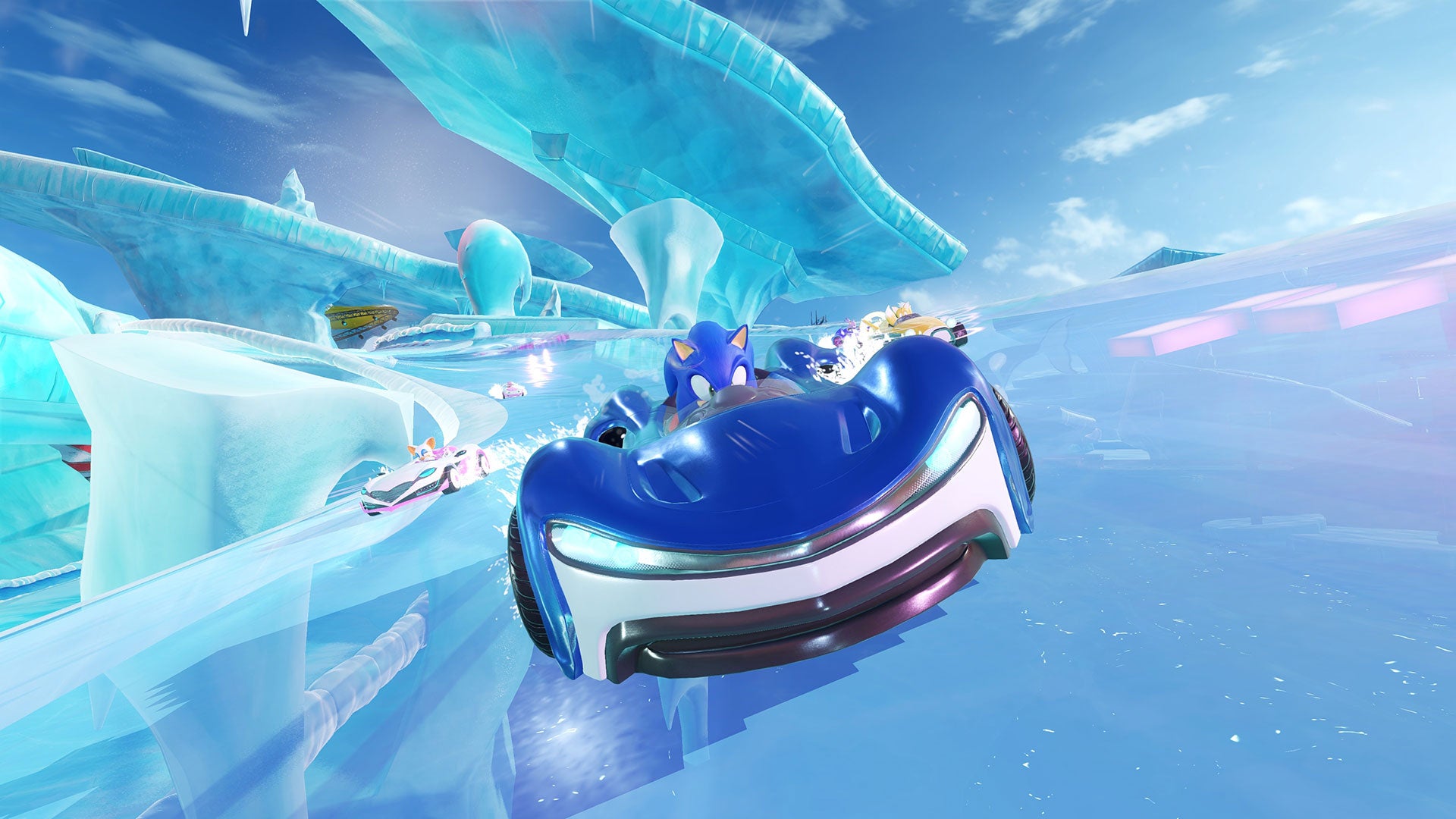 As you might’ve already guessed from the name, Team Sonic Racing is all about teamwork. Unlike competing kart racers you compete in teams of three in most of the game’s modes. Each team consists of three members, with the vanilla selection being Sonic, Tails and Knuckles.

You can race solo, but the real fun comes from working alongside AI or real-life partners as you exchange items, take out enemies and slingshot each other across the track. Bathe in the trail of a team member’s vehicle for long enough and you’ll be thrust forward, gaining an extra burst of speed for your skilled driving.

With the press of a button you can request an item from a team member or give away your own, helping out allies who might find themselves in a tight spot. Finally, upon building up enough rings throughout each race you can activate an Ultimate ability. This is essentially a chaotic burst of speed that can wipe out anything in its path, making it essential in the later parts of final laps. It’s clumsy though, carelessly hurling you into walls and off ledges, with the far from graceful controls making it a nuisance to maneuver at times. 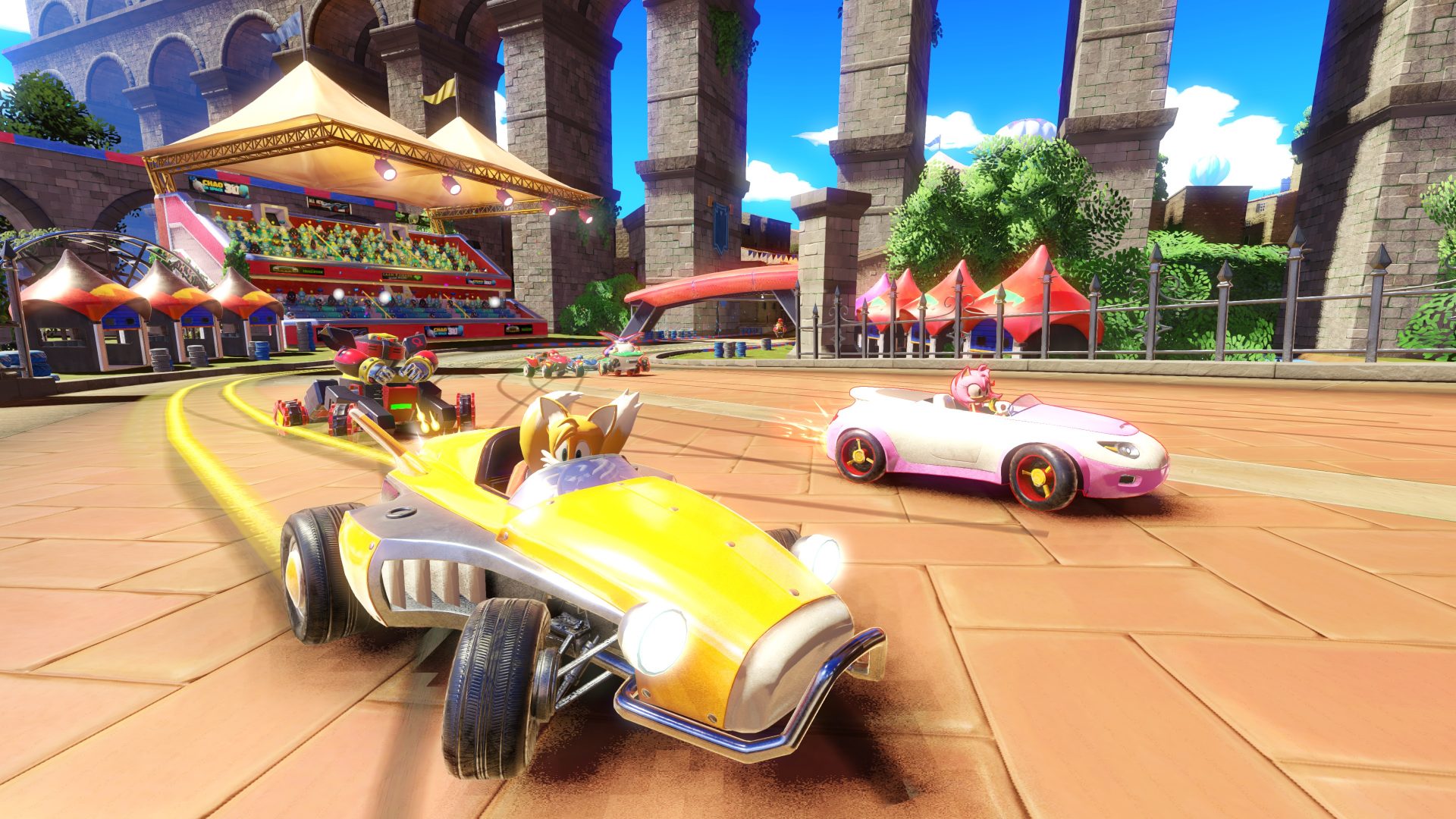 All of these team-based mechanics gel to create a wondrous cadence throughout each race, especially coming alive as you try desperately to amass points across a Grand Prix. Scoring 1st place won’t always work this time around. If your team trails behind their opponents, it’s easy for them to pull you down the leaderboard.

This incentivises you to work together, although when playing alone I often found myself frustrated with the friendly AI. I was racing ahead while they fumbled at the back of the pack, failing to catch up regardless of how many items I spammed them with. This nuisance comes to a head in Team Adventure, Sonic Racing’s equivalent to a solo campaign.

Here you’ll place through a variety of stages such as vanilla races, time trials and more creative checkpoint-based activities where you’ll need to avoid robots on the track while passing through gates that they themselves move. It’s a cool twist on established kart racer motifs, showcasing a potential that sadly isn’t realised elsewhere.

When you consider the extensive cast of Sonic the Hedgehog characters crammed into the playable teams, it’s a shame they do so little off the track. The campaign begins with a brief cutscene, but it’s hours until you see anything more. SEGA has shown before that Sonic, Amy and friends can be hilarious in the right hands, but here, there’s nothing to write home about. 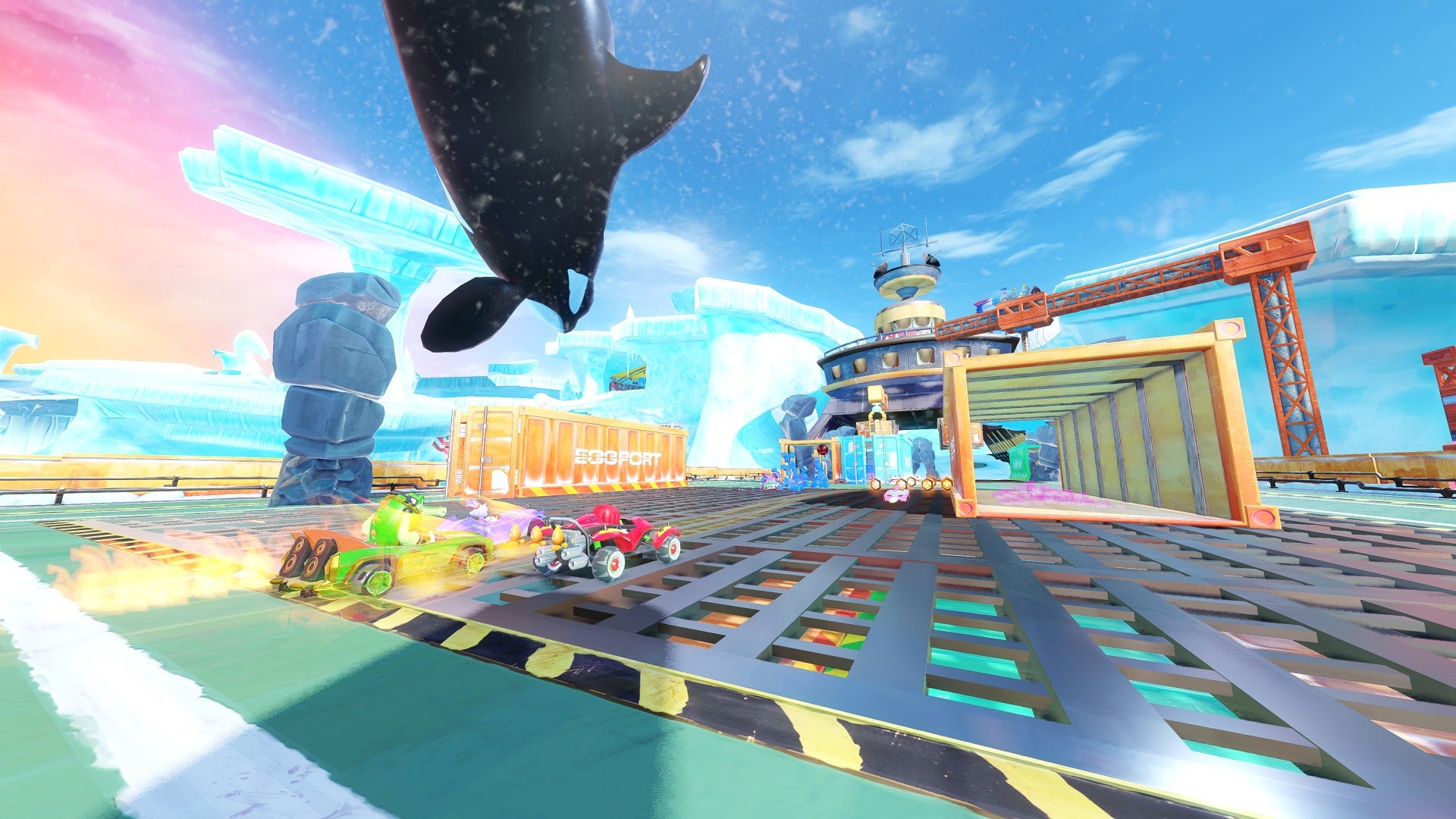 To Sumo Digital’s credit, each vehicle has a distinct look and feel, moving across the track in a way that demands concentration if you want a perfect lap. It’s a shame the majority of them are awkward to control and handle in a way that feels unnatural. Every vehicle feels needlessly heavy, yet becomes light as a feather once you start drifting.

Drifting around corners into a boost should feel spectacular, but here the hollow momentum is a weak facsimile of what makes the genre so compelling. Things improve once you begin upgrading vehicles, fitting them with a selection of unlockable parts that boost stats such as maximum speed, defense and acceleration.

There’s a lot of depth here, but not enough to help remedy the average driving at the core of Team Sonic Racing. The Team idea is truly unique, echoing something we haven’t seen in the genre since Mario Kart: Double Dash, but it’s too simplistic to justify some serious investment, and a litany of other issues emerge on top of this.

Despite being colourfully designed and filled with references hardcore fans will adore, I often found myself bouncing off stage terrain and  clipping through supposedly solid scenery. It just felt unpolished, roughly juxtaposed with the otherwise beautiful stage design. 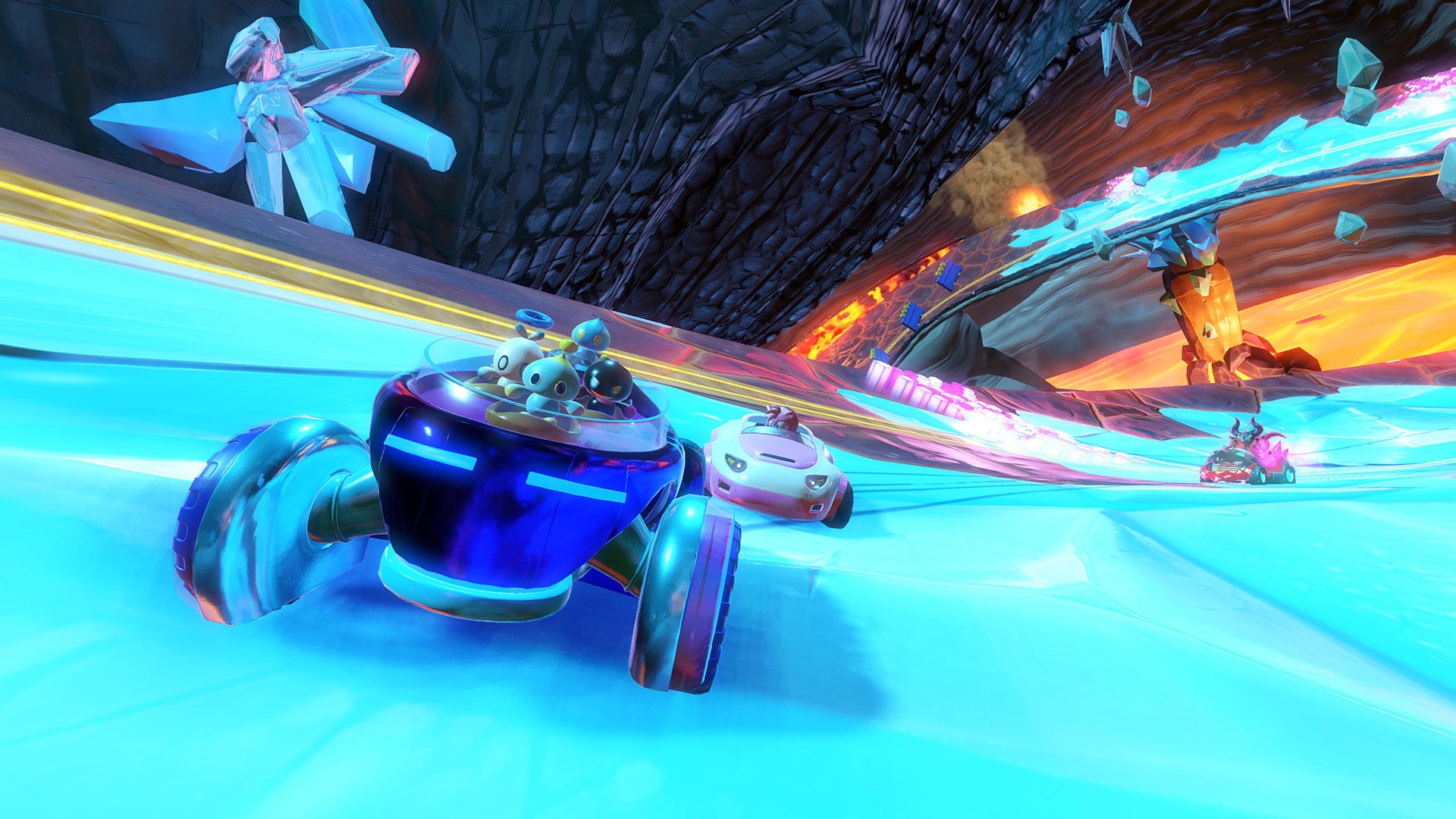 Characters themselves fall into three distinct categories – Speed, Power and Technique. You’ll find one variant across each team, but truthfully I didn’t feel any of them had a serious impact on how the races panned out. Race well and you’ll be able to overcome most obstacles without relying on a certain archetype.

However, knowing I could switch things out and stand a better chance made tackling later levels much more enjoyable. You’ve also got 21 tracks spread across seven zones, including some returning favourites and some stellar music across them all.

Combine that with finicky handling alongside performance issues and you’ve a package that fails to live up to what came before it.

Although, given its budget launch price, hardcore Sonic fans could find something to love here.