A Bluetooth and Chromecast speaker that tries to deliver a big room-filling sound, but is let down by a lack of bass and weedy amplification

What is the Tangent Spectrum W1?

The Tangent Spectrum W1 is a new wireless multiroom speaker from the Danish manufacturer. It includes integrated Wi-Fi and Bluetooth, as well as Google Chromecast built-in. It promises to deliver a big, room-filling sound thanks to side-firing drivers, but retailing at £179, does it do enough to stand out in a crowded marketplace?

The Tangent Spectrum W1 boasts a minimalist design, with a simple matte black or white cube that sits on a wooden plinth. It’s very Scandinavian in appearance, and more than a little retro as well. However, the simplicity could also be regarded as boring, and even the addition of some wood can’t change the fact that it’s basically just a cube.

The drivers are located on either side, firing in opposite directions to one another. This approach is clearly designed to create a larger soundstage, but may well affect the sense of stereo separation. It also feels insubstantial when you pick it up, with a construction that relies too heavily on plastic. It only weighs 2.35kg, which doesn’t exactly instil you with confidence. 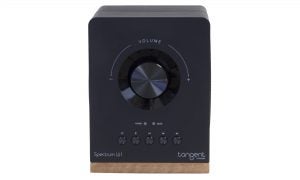 The front is dominated by a large volume dial, and below that there are some basic controls for on/off, play/pause, skip forward and skip back. There’s also a button for selecting and pairing a Bluetooth device, and Tangent clearly expect you to use a connected smart device as the primary controller.

There are a couple of LED indicators on the front, sandwiched between the volume dial and the controls. The Power LED shows when the W1 is on, while the Mode LED indicates which connections have been selected: green (Chromecast), blue (Bluetooth) and amber (AUX). 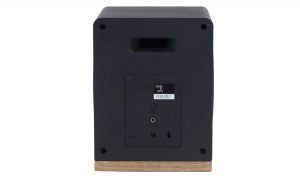 The physical connections are limited to a 3.5mm mini-jack input for a wired connection, and a socket for the AC power adapter. The rest of the connections are wireless, with the Spectrum W1 supporting Bluetooth and Wi-Fi.

The Tangent Spectrum W1 is equipped with two 3-inch drivers that fire in opposite directions to one another. According to Tangent, these speakers are full-range, going from 40Hz to 20kHz, but despite the presence of a bass port at the rear, I’d be very surprised if the W1 can get anywhere near 40Hz. There’s 7W of amplification for each speaker, which feels rather weedy given the Spectrum’s size and room-filling ambitions. 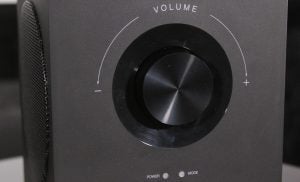 The built-in Wi-Fi (2.400-2.4835 GHz) is designed to be the primary method of connection, allowing you to take full advantage of Google Chromecast. This provides access to a wide range of music streaming services, including Spotify, Deezer and Tidal, as well as offering multiroom capabilities. In terms of file support, the Tangent can handle MP3, WMA, FLAC, AAC and AAC+. 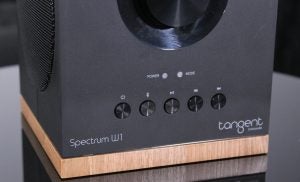 The first thing to point out about the Tangent Spectrum W1 is that it’s not always the most intuitive wireless speaker to set up. I’d definitely recommend reading the instructions first, because the changing colours of the front LEDs might as well be in Morse code.

The auto on/off feature and the dual nature of the power button also proved sources of confusion. However, after successfully interpreting what the various blinking coloured LEDs actually mean, and downloading the Google Home app, I was able to get the W1 up and running.

If for some reason you can’t set up the Wi-Fi, and would rather use a Bluetooth connection, simply press the pairing button and the speaker will enter pairing mode, then select Spectrum W1 on your Bluetooth device. 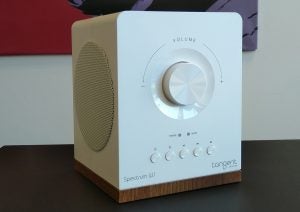 Once I’d actually got the Tangent working, using it was fairly easy. You simply select the Chromecast mode, open any Chromecast-enabled app (Spotify, Tidal etc) and then tap the cast icon on the app and select the speaker or group of speakers to play.

Since my review sample was brand new, I ran the W1 in for a while, just to loosen things up. After that I set about putting the speaker through its paces. I was initially impressed by the size of the soundstage, with the side-firing drivers doing their job and making the speaker sound bigger.

However, this sense of scale was delivered at the expense of any stereo imaging, and as a result, sounds and instruments simply filled the air rather than created a convincing sonic presence. The sound quality was decent, but the W1 is definitely designed to produce background music rather than provide critical listening. 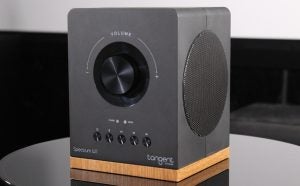 The speaker also lacks the power to back up its ambition, with the 14W of amplification struggling to deliver a loud enough soundstage. If a manufacturer is looking to fill a room with sound, then I’d recommend making sure the speaker has enough power not to sound strained at high volumes. There is also a distinct lack of bass, despite that rear port and the 40Hz claims.

This was clearly evidenced by the epic scale of Suede’s new album The Blue Hour, which felt considerably less symphonic and sweeping with the W1. That’s not to say the speaker sounds bad, because it is capable of a lively and often fun audio performance. Brett Anderson’s vocals retained a pleasing quality and remained intelligible over the instruments, thanks to a balanced mid-range.

The problem is that without enough bass and power to provide a solid foundation, the side-firing drivers have to work twice as hard to achieve their room-filling aspirations. To Tangent’s credit, at least the W1 has a decent mid-range and doesn’t fall into the trap of being all bass and treble. The problem is that in this case, a bit more bass would have been really useful. 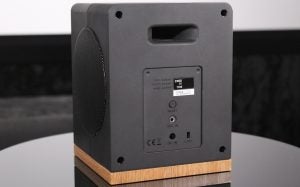 This limitation was most apparent in the opening track of The Blue Hour, where a baritone chorus lacks the depths required, and the sound of the orchestra is missing the ominous tone that the band intended.

Things pick up when they switch to more traditional guitar-driven tracks, and here the sound is fairly natural and balanced. The W1 is clearly dependent on the type of music chosen, so play to its strengths with music that has less bass and a more poppy sound and you’ll be fine.

If you’re looking for a speaker to leave on in the background as you move around the room and do other things, then the Tangent Spectrum W1 has certainly got you covered. However, those with more discerning tastes will quickly realise that it lacks the nuanced and sophisticated sound of some similarly priced speakers.

Why buy the Tangent Spectrum W1?

The wireless speaker market is highly competitive these days, so the Tangent Spectrum W1 has its work cut out at £179. It can deliver a decent sound and the inclusion of Chromecast is useful, but it does struggle to compete with similar speakers in this price range

That’s especially true now that the excellent Acoustic Energy Aego BT2 can be picked up for just £149. This Bluetooth speaker may not have Wi-Fi and Chromecast, but it’s incredibly well-made and sounds fantastic thanks to a big, beefy, detailed performance.

This Bluetooth and Chromecast speaker tries to deliver a big room-filling sound thanks to side-firing drivers, but its balanced mid-range is let down by a lack of bass and weedy amplification.