According to recent stats 35 per cent of users have never backed up their computer and of those that do the majority backup less than once per year. The most elegant solution is network attached storage, but cost and complexity mean it has yet to scale down to mainstream consumers. This could be about to change…

The Synology DiskStation DS211j is the baby brother to the excellent Synology DiskStation DS411j and it brings with it two significant changes: a reduced form factor supporting two hard drives not four and a 40 per cent price drop. The knock on effect is the DS211j, at just 161x88x218mm and 1Kg (excl. drives), is more convenient to store and its RRP will turn heads. 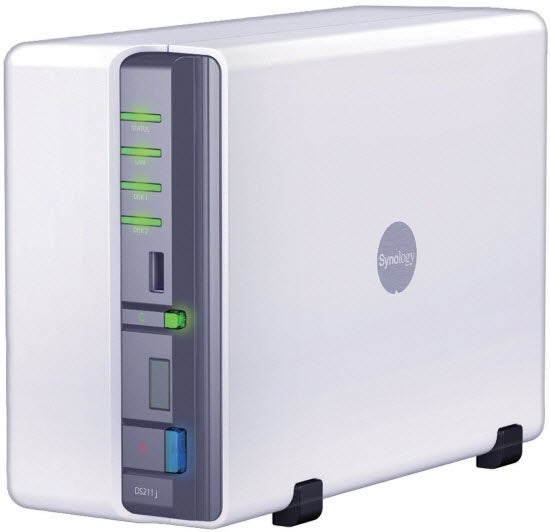 One look at its spec sheet should firm up that interest. The DS211j packs the same horsepower (1.2GHz Marvell Kirwood CPU, 128MB DDR2 RAM) as the larger DS411j along with support for JBOD, RAID 0 and RAID 1 arrays plus iSCSI support. It also matches up with one front and two rear USB ports which can be used to add further storage, backup specific content to thumb drives or share a printer across a network. These ports support some WiFi dongles so you can ditch the cables.

For those who do wish to cable up the DS211j supports the now mandatory Gigabit Ethernet and should appeal to multimedia fans being DLNA and UPnP compliant. iTunes Server is built in too along with ‘Audio Station’ for streaming Internet radio stations or iPod playback (with optional USB speakers) and ‘Download Station’ functions as a BitTorrent, FTP, HTTP, eMule and NZB (Usenet) download client without needing a PC. 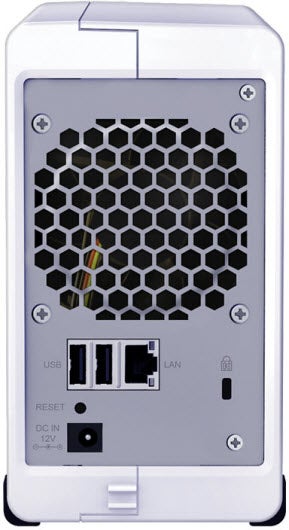 ‘DiskStation Manager’ meanwhile deals with those all important backups allowing scheduled daily, weekly or monthly PC backups and it is compatible with Apple Time Machine. The provided Synology Data Replicator 3 software can be set to backup specific desktop data from all computers on the network including Outlook emails. Finally iOS and Android device owners enjoy a plethora of apps including ‘DS audio’, ‘DS file’, ‘DS photo’ and ‘DS finder’ for accessing your NAS content. ‘DS cam’ even allows for remote monitoring of a compatible IP camera connected to the network. A full list of all natively compatible third party peripherals can be found here.

By any account this all combines to create a feature set which would embarrass far more expensive NAS devices and Synology has clearly remembered the DS211j will appeal to advanced users on a budget, not just mainstream consumers. Happily those without a great deal of technical knowledge won’t be intimidated either…

Where recent Synology products have excelled is their DiskStaton Manager user interface. Now at v3.2 DSM this browser based UI provides an experience more akin to an operating system featuring a desktop where icons can be dragged and dropped, windows (with a Mac OS X influenced design) and multitasking. Consequently setup is as simple as clicking the ‘Quick Start’ icon and following the prompts to allocate storage and create user profiles. DSM is universal to Synology NAS devices so while the DS211j can’t solely take the credit, it does gain significant advantage. 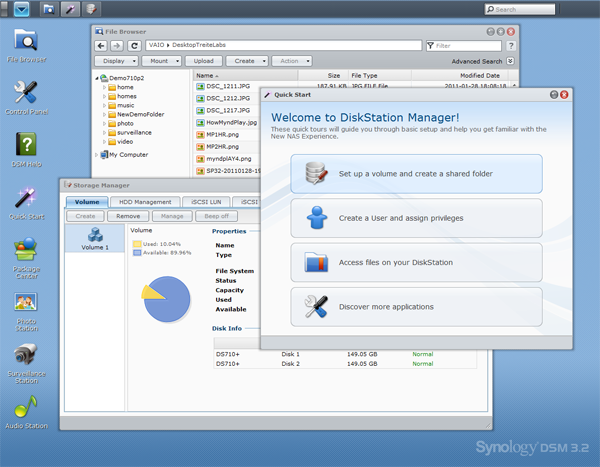 On the physical side things are less slick. Where Synology has cut expense is in the build quality and the DS211j is constructed almost entirely from cheap plastics. Thankfully metal is used for the rear grill (housing the fan and connections) and for the drive mounts, but opening the DS211j is no more sophisticated than sliding off its fairly stiff side. More positively mounting the drives is simple with Synology using a combined SATA connector for each (2.5in or 3.5in) drive so they can just slot in. Operation is quiet, but depends on the noise levels of the drives you use to fill it. Power consumption is also reasonable using 23W when active and 11W idle.

As mentioned previously Synology NAS devices support the common JBOD, RAID 0 and RAID 1 arrays while RAID 5, RAID 5 Spare, RAID 6 and RAID 10 are also compatible. Despite this arguably their best feature is Synology Hybrid RAID. Much like Netgear’s X-RAID, SHR allows for disks to be dynamically swapped for larger volumes without powering down the device. Once the larger drive is inserted the array is then rebuilt automatically and all content is available throughout the upgrade process. With the DS211j firmware supporting drive sizes up to 3TB its means even two drive slots can pack in some serious storage. 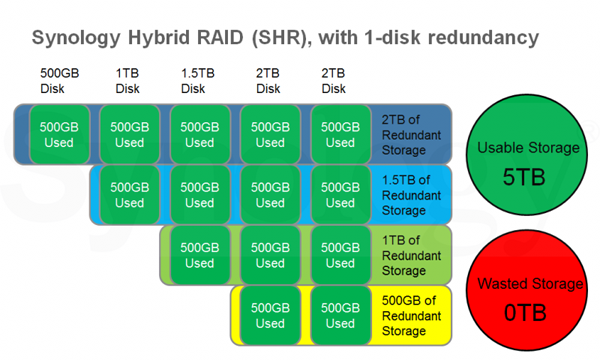 So what about performance? Here the DS211j is competent rather than spectacular. The 1.2GHz CPU is 400MHz up on the DSx10j series, but the 128MB RAM is still something of a bottleneck. This is most obvious when copying small files to the NAS which averaged 18.1MB/s with read times hitting 19.9MB/s. Large files perform better: with a 4GB file read/write times averaged 34.4MB/s and 24.6MB/s respectively. That said, as with the DS411j, its dedicated hardware means encrypting data doesn’t have a significant speed impact.

”’Verdict”’
The Synology DS211j isn’t the best looking NAS you’ll see, but the sector is hardly famed for its good looks. Instead the focus has been on delivering a fully featured and intuitive device at a price tag that has the potential to tempt mainstream adoption. Build quality and performance could be improved, but neither is enough of a hindrance to take the shine off what is a breakthrough product.