Call us strange, but at TrustedReviews we love a good NAS device. The combination of a safe repository for our data, and – in most – a range of features and abilities designed to augment that storage capacity make for a winning combination. Over the past few years Synology has been consistently rolling out high quality NAS systems, with last year’s DS410j, for example, impressing us with its low price, and plentiful capabilities. Good things, therefore, are to be expected of this year’s model, the DS411j.


Aesthetically the differences are, for all intents and purpose, non-existent. Remove the product name from the front facia, and we defy anyone to tell the DS411j apart from its predecessor externally. This isn’t a bad thing, however, as the system is certainly attractive as NAS devices go. So although you’ll generally put your NAS out of sight, the DS411j won’t offend your eyes if it is left on display. The constant flashing of the LAN, hard drive activity and system status LEDs might get a bit annoying, though. 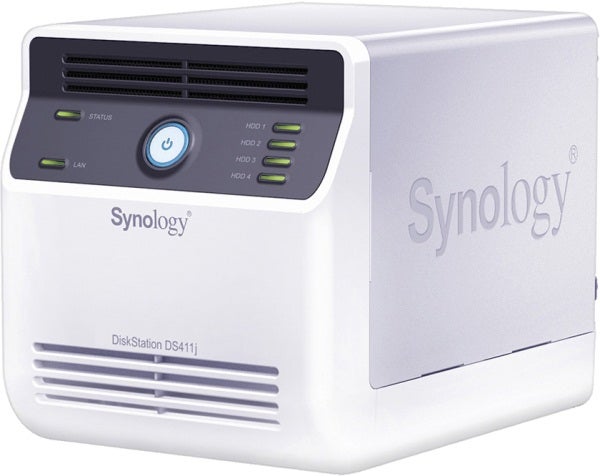 Rearwards, the DS411j has a hinged panel held in place with thumbscrews – making for easy removal. Flipping this open reveals four removable bays which will have screw holes for both 3.5in and 2.5in hard drives. Sensibly the DS411j’s Kensington lock attachment point holds the rear panel in place. Below this panel sit the DS422j’s power input, Gigabit Ethernet jack, and twin USB ports. Nothing revolutionary, but all the important bases are covered.


Being picky, we’d prefer for the drive bays to be placed at the front making for easier access, and we wouldn’t complain if the drive trays were metal rather than plastic. But such complaints wouldn’t stop us buying a DS411j and really we can’t fault the unit – especially given its circa-£250 drive-free asking price.

Inside the DS411j is a 1.2GHz GHz CPU coupled to 128MB of RAM, which coupled with dedicated encryption hardware means that the system blazes along nicely. With a drive-free setup, at least, the first stage of set-up is installing the DS411j’s operating system. We should note that although the bundled software makes putting an OS on the DS411j a breeze, the system isn’t actually fully configured in this process; you still have to create a storage volume using the web interface.


That small grievance aside though, we cannot fault the DS411j’s administration control panel. Large, well labelled icons make it simple to navigate through the various options, and the descriptions of all the possible actions are always helpful. Whether configuring RAID settings, adding and removing users, or running downloads directly from the DS411j (more on which later) you’re unlikely to find the process confusing. What’s more, thanks to some fancy JavaScript, you can have multiple ‘windows’ open within this interface at once. 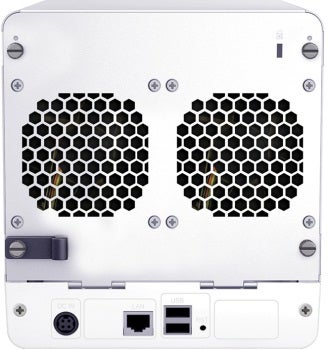 The responsiveness of the DS411j’s interface is impressive. During what we would expect to be common multitasking scenarios, such as checking out the system’s monitoring windows while formatting a hard drive, we noticed no slowdown. It’s the ease of use that’s key, however, and which sets the DS411j apart from its rivals – power users will want to disable the quick start panel and use the ‘standard’ control panels, though.


A feature of the DS411j we particularly like is the option to use Synology Hybrid RAID system. By default with two disks this uses one for data and the other for redundancy, just like a standard RAID-1 array. But with Synology’s system, you can add additional disks without rebuilding the RAID array, and replace existing drives with higher capacity ones up. If you want to manage your own drive configurations – RAID-1, RAID-0, RAID-5, RAID-6 and JBOD are supported – you can, but there’s little reason to given the flexibility that Synolony’s option affords long-term, unless you install four 2TB drives from the off, in which case you’ll have maxed out the storage capacity of the DS411j.

Once you do have your storage set up, accessing it is made easy. You can add a shared volume as a mapped drive with the same Synology assistant tool used to install the DS411j’s firmware, navigate your network to find the system yourself, or use an FTP client if you have enabled that connection method. Transfer speeds are respectable given the DS411j’s price; we saw a single large file copy to the DS11j at 26.3MB/s and read from it at 34.5MB/s. A mix of small files transferred the NAS at 17.9MB/s and from it at 19.8MB/s. We were pleased to note that, thanks to the dedicated hardware handling the process, encrypting the data stored on the DS411j doesn’t lead to massive slowdowns in transfer speed.


Setting up Synology’s Data Replicator backup software was frustration free, giving plenty of control over what data should be saved and how frequently. Mac users will be pleased to find that the DS411j can have Time Machine support enabled. Windows users get a few extra software options, such as a Download Station for intercepting downloads and having the DS411j handled them for you, be they standard http and ftp transfers, or BitTorrents – you can also access this functionality via the web interface if you don’t want to install software. 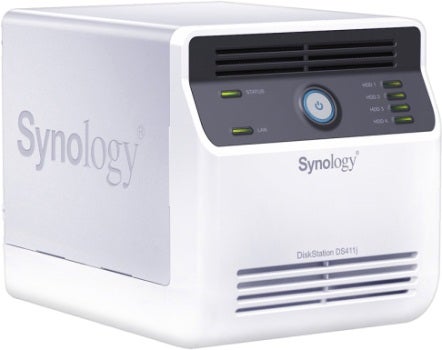 Any media on the DS411j can be access in a variety of ways. Videos, images and music can be served to any DLNA-compatible device on a local network, and an iTunes server lets you keep all your music in a central repository if using Apple’s media player. The aptly named Audio station and Photo station also let you serve up files of the respective types over the web – a feat made easier if you use the built-in DNS – and Photo station even has an iPhone app. Web station lets you host a basic PHP and MySQL based website, but we wouldn’t recommend using the DS411j to host anything likely to see a lot of traffic.


What really sets the DS411j apart from the competition isn’t so much the amount of functionality it has – though it certainly has features a-plenty – but rather how smartly it exposes them. Whether you just want a safe backup repository for your data, or need to access it from several locations using various different client devices, from PCs to media streamers, the DS411j will hold your hand configuring it if you need it to, and let you manage by yourself if you can.


For the price, we can’t think of another NAS that offers such a comprehensive combination of powerful features made so easy to use. The DS411j may not be the most exciting product in the world, but it’s definitely a good one.