The Swan Fearne 5-Speed Hand Mixer is sturdy and powerful. But its range of speeds from very fast to ridiculously fast feels a little limited. It would be extremely handy to have some slower settings or a soft start function here, as using this mixer often resulted in splatter. On the plus side, it comes with three different durable-looking stainless steel tools.

The Swan Fearne 5-Speed Hand Mixer is part of a range of home appliances designed in collaboration with TV presenter Fearne Cotton. Like other products in the range, it’s available in four shades – Pale Honey, Peacock, Truffle and Lily – and its manual comes with some recipe ideas.

While the focus is clearly on quality here, with a sturdy build and stainless steel tools, I found this mixer’s range of speeds rather limiting. It went from very fast to ridiculously fast, underlining the main thing I dislike about hand mixers. The slowest speed setting was so fast I rarely needed to go beyond it, which also means it was difficult to control for certain tasks.

Swan Fearne 5-Speed Hand Mixer – What you need to know

The Swan Fearne 5-Speed Hand Mixer’s handle is covered in the same glossy plastic as the rest of the mixer and it’s a little slippery to grip, especially due to its round shape.

On both sides of the mixer, there are chrome-finish plastic panels, which tend to attract fingerprints and other smudges. Still, it’s pretty easy to wipe down any splatter from the body of the mixer.

Like other appliances in the ‘Fearne by Swan’ range, this mixer has a slightly retro vibe in modest pastel colours. Its manual comes with some recipes, although these are for the entire range – so there’s only one recipe meant specifically for hand mixers.

The button for ejecting tools and the speed control switch are both on the top part of the handle, and are easy enough to reach.

In my tests, I stuck to setting 1 for most of the mixing process. The exception being whisking egg whites, where the speed could be increased to the highest setting for a quicker result. Still, I had to increase the speed gradually, as there would have been significant splashing otherwise.

I’d definitely recommend using a deep bowl with this mixer and avoiding using it for tasks that require lighter stirring or combining. 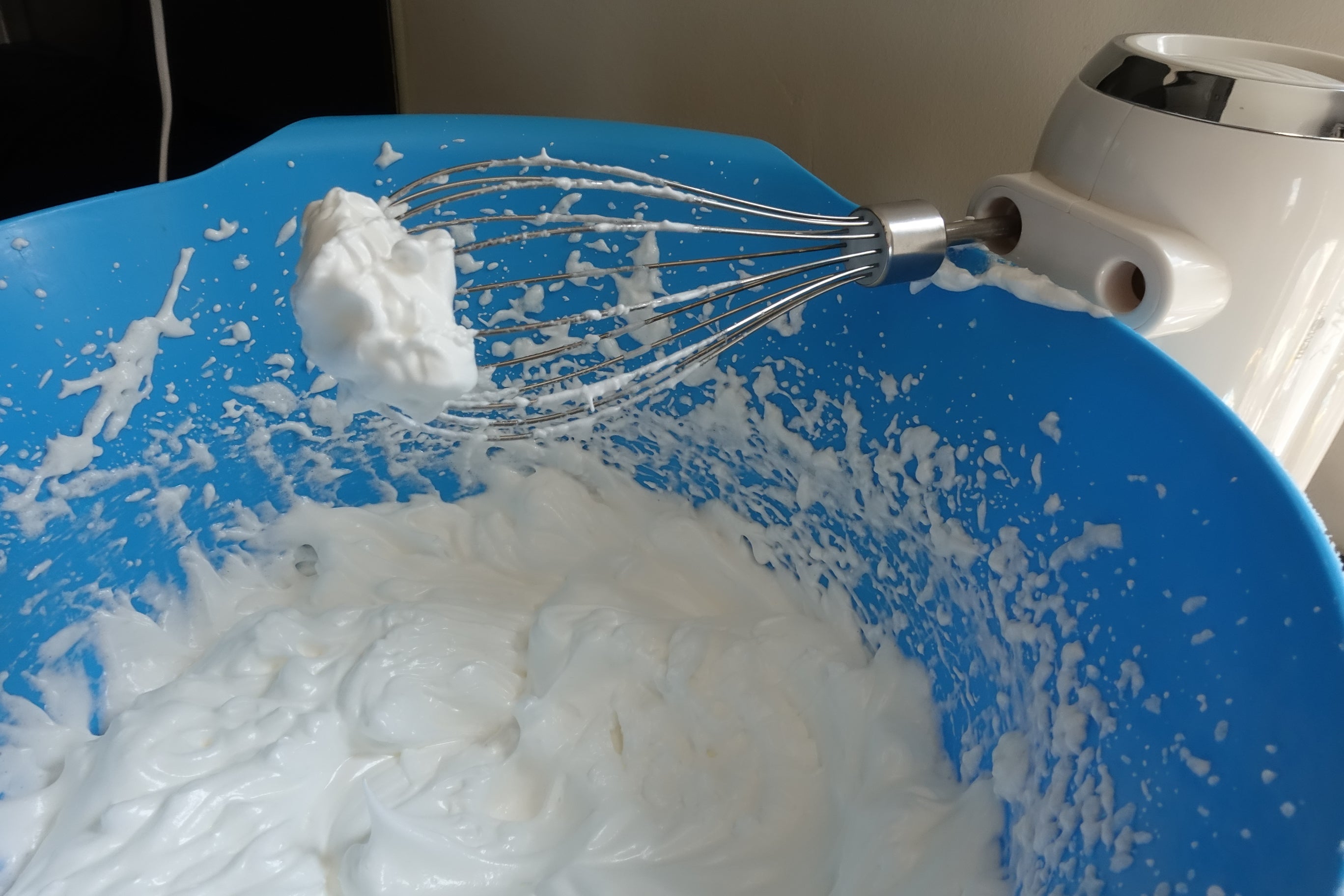 This mixer is incredibly fast, so watch out for splashing 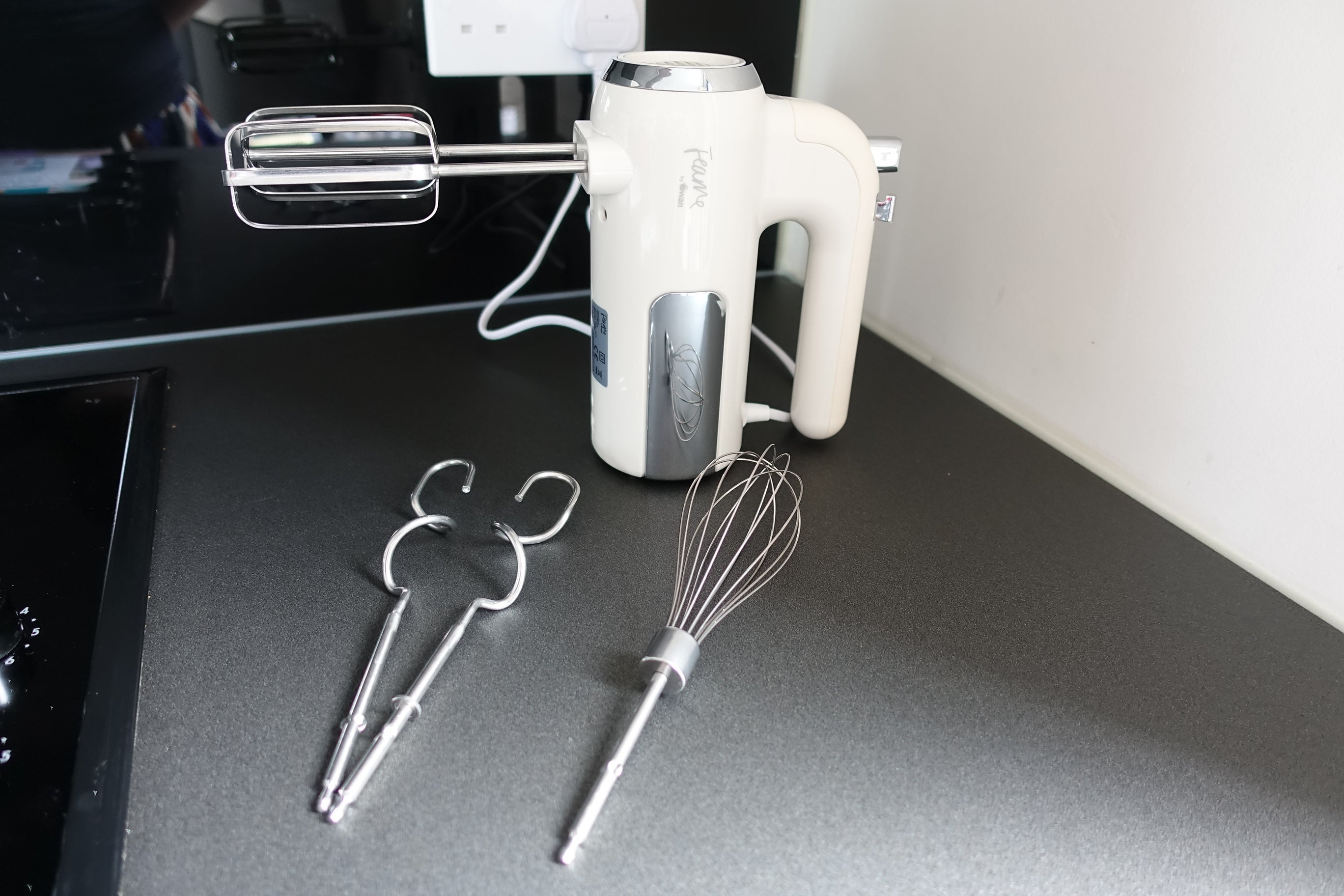 The attachments are sturdily made

While I would still recommend the beater tools here for combining butter and sugar, using a whisk for batters does make some sense if you consider the speed of even the lowest setting. As there’s only one whisk, it can be controlled more easily, potentially meaning less mess than using the two beaters.

The dough hooks are handy for dough, although I would use them mainly for combining ingredients – rather than any long-term kneading – and take some breaks, as the mixer tends to get quite warm after 5mins of continuous use.

While the manual wasn’t entirely clear whether the tools were dishwasher safe, I didn’t detect any problems washing them in the dishwasher.

Should I buy the Swan Fearne 5-Speed Hand Mixer?

If you want power, the Swan Fearne 5-Speed mixer has plenty. But if you want full control over what you’re doing, it might be better to opt for a hand mixer with a greater difference between the speeds.

The Russell Hobbs 24672 Desire hand mixer also has five speed settings. But these are more varied, meaning you can combine ingredients peacefully at slower settings without any major spillages. The KitchenAid 9-Speed hand mixer offers even greater control, although it also comes at a higher price.