I understand that baseball might not be everyone’s cup of tea, but hear me out – Super Mega Baseball was an under-appreciated gem. A sports game that took its subject matter down to its core element, and made it easy to digest for those with minimal knowledge of the sport. By shifting the focus to clear, simplified methods of controlling the pitching, batting and fielding, as opposed to the heavy stat-based side of the sport, Super Mega Baseball managed to offer an arcade-y feeling yet ultimately faithful baseball simulation.

This sequel builds on the solid gameplay foundations by offering a bit more in terms of content and visuals, keeping the instant fun of the original and simply adding more ways for you to have it.

Batting requires you to judge the type of pitch and react with either a simple hit or a ‘hard’ hit, which requires you to hold X/Square and build up power, releasing it at the right time to really hit it out of the park. The same mechanic is present in the pitching, where you choose the type of ball you’re going to hurl and then either throw with a simple one-button press, or again try to hold down for additional power.

Fielding uses the tried-and-tested ‘each face button is one of the bases’ control scheme that’s been present in the baseball game genre for decades now, but flicking the right stick up or down allows you to jump or slide for some surprisingly spectacular catches.

There are a few more modes on offer this time around, too. As well as the usual Exhibition matches and Season modes, there’s now an online mode called ‘Pennant Race’, where you play a series of online matches over a set period, competing for position in a world leaderboard. It’s Overwatch’s seasons with their placement matches meets FIFA’s online seasons, and offers a bit more than just standard one-off matches against rivals.

You can also take part in a local or online Elimination tournament, which can be fully customised to your specifications. 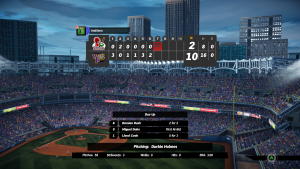 One of Super Mega Baseball’s best features returns in the way that the game’s difficulty is dictated by a ‘Ego’ number. Put simply, the higher you set your Ego, the more of the game you have to manually control, as well as the AI difficulty.

So, if you want to micro-manage every aspect of your team and have zero assists when it comes to battling, pitching or fielding, then bump up the Ego – but expect to have yours checked at first. Despite the cartoon-y look, Super Mega Baseball 2 can be scaled from instant fun to near-realistic simulation by tweaking Ego, allowing you to find your personal sweet spot. Brilliantly, this can be adjusted per person playing, so local multiplayer matches can be balanced to satisfy all skill levels.

Ego affects your match score, and you’re scored in every single match you play in the game, whether that be a quick one-off exhibition match, part of the season mode or even multiplayer. So, even if you just fancy the odd game here and there, you’re still competing in a global high-score leaderboard, with points awarded for everything from home-runs to correctly identifying when a pitch would go awry and not swinging at it.

Ego can also be switched on the fly, so if you find yourself struggling or absolutely destroying your opponent then you can fine-tune elements until things even out.

Another really cool feature is that every player is affected by ‘mojo’. A pitcher throwing a bunch of poor balls that result in home-runs will see them lose their mojo, lowering their stats. Conversely, a series of strikes will see their mojo increase as they hit their stride.

Pulling out a pitcher because they’re on a poor run of form is just as important as making sure they’re not tiring during a match, while a batter who is knocking everything into orbit should be prioritised in your lineup. It’s a simplistic piece of team management that offers a bit more ownership over the proceedings, but it avoids being super-stat heavy, which the sport of baseball can be. 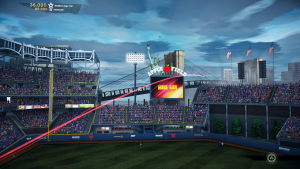 Visually, it’s a little less over-the-top than the super-exaggerated players found in the original, but the game still has that Saturday morning cartoon look about it.

The menus are much tidier this time around, and overall it’s a much slicker-looking game than the original – although the slight change to the graphical style might not be to everyone’s tastes. In a genre that prides itself on having some of the best graphics on the market, it does the job – but it doesn’t really excel in any one area.

Again, the game has a host of customisation options, allowing you to create a bunch of custom players; but now you can also create your own team. These custom teams can’t be used in the main-ranked Pennant Race mode, but in most of the other modes there’s an option to include them, should you wish.

As far as local multiplayer games go on the current consoles, Super Mega Baseball 2 is a great option. If you’ve got Xbox Live Gold, then you can grab the game for free as part of the May lineup. Even if you’re not a huge fan of the sport, it’s well worth checking out.