What is the SteelSeries H Wireless?

The SteelSeries H Wireless is a seriously high-end wireless gaming headset that includes just about every feature you could imagine, including a superb desktop USB controller with inbuilt battery charger. With a retail price hovering above £200, though, it’ll need to impress sonically too to justify its price. 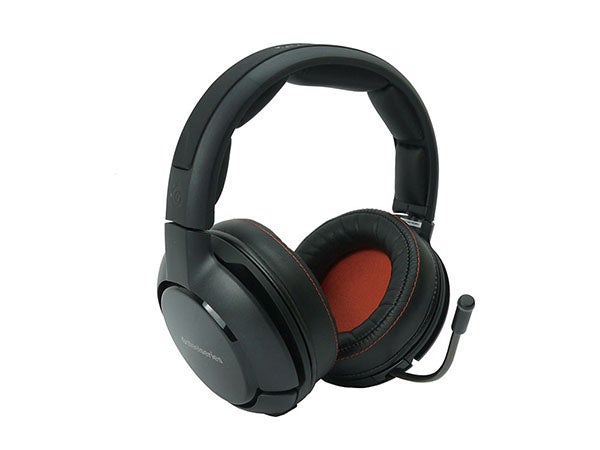 When we said this headset has just about every feature, we weren’t exaggerating. Open up the box and you’re greeted by cornucopia of goodies. Inside you get the headset, its USB controller, a second battery, just about every cable you could imagine (miniUSB to USB, 3.5mm audio, Xbox 360 chat, optical digital and mobile phone), a charger and even socket adapters for all the major plug socket standards. It’s just the sort of haul you’d hope for from a headset costing over £200.

In terms of what the headset can do with all those bits and pieces, its primary purpose is as a wireless USB headset with sound being slung from the USB controller to the headset via a fairly standard, though not universal, wireless technology (range 12m, latency
In addition to this, though, you can plug any standard analogue or optical digital audio source into the USB controller, where it is piped to the headset. There’s also a sharing port on the headset which can be used to plug in a second set of headphones – great for quiet multiplayer sessions – or to plug analogue sources directly into the headset, as well as a chat port, which can be used in conjunction with an Xbox 360 controller among other things.

All told, you can use this headset with any PC or Mac – it’s just plug and play with no drivers needed – all the major games consoles and any sort of phone, mp3 player or Hi-Fi type of audio source. 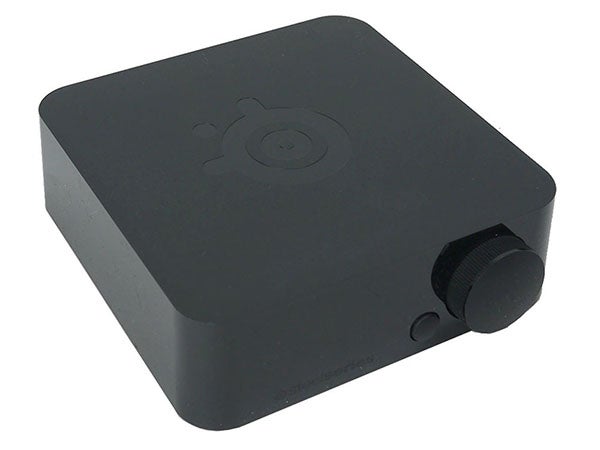 What really makes this headset though is its USB hub, which incorporates all those extra connections, a cracking display and control system for managing all those features and a battery charger.

The latter of these is the real clincher – being able to always have the included spare battery charged and to hand elevates this above any other wireless headset in one fell swoop.

So what are its limitation? Well, it doesn’t have Bluetooth so can’t be used to wirelessly connect to phones or tablets. It also doesn’t have multi-speaker surround sound, which although not great for music is the ultimate for competitive gaming.

The headset and all its accessories are typical SteelSeries in so much as they’re all black, with just a hint of orange. We’re always a little reluctant to call a headset out and out stylish – next to noone looks good with headphones on – but so far as is possible the H Wireless fits the bill.

Most of it is just matte black plastic but the touch of gloss for the earcup covers, and of course the orange stitching and earcup lining, just adds that certain something. 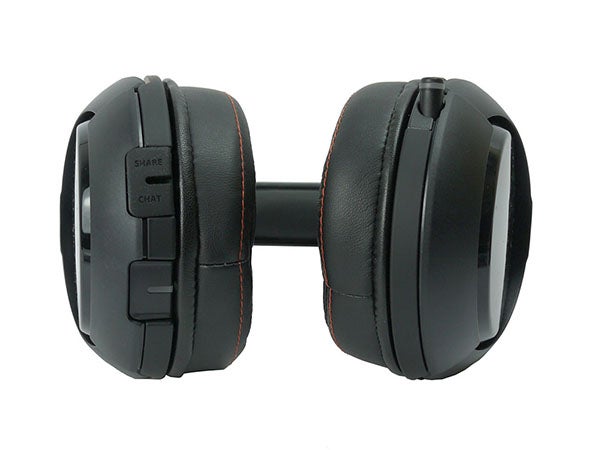 There are plenty of nice touches too. The microphone is retractable and has a clever little ring of light around its end to indicate it’s on – tap the power button to turn it on and off. There’s also an easy to reach volume and menu wheel that mimics that of the USB controller. This adjusts volume by default and jumps into the menu when tapped.

The last flourish is that the earcup covers can be removed. On the left this reveals the battery – making swapping batteries a sub 10 second affair – while the right reveals a miniUSB socket which is used for firmware upgrades (not very glamourous but it’s one less connection marring the outside).

Build quality is also good. Plastic it may all be, but it feels sturdy and has survived plenty of twisting and bending so far without any hint of buckling.

The USB controller is even better. It’s sleek and minimalist with just a volume knob/menu wheel and back button adorning the front and, hidden away when off, to the left is the OLED screen. This is exceptionally good quality with crisp, clear readouts that are perfectly visible from any angle.

The SteelSeries H Wireless is reasonably comfortable but is far from the best. The padding on its earcups is just a little lacking, so your ears will likely touch the fabric driver coverings. Combined with a fairly strong clamping action and somewhat underpadded headband, it only takes and hour or so for a little soreness to set in.

It’s definitely better than any on-ear headset and is about average for an over-ear design, but the likes of the Sennheiser G4ME One and Q-Pad QH 90 are still way out in front.

The headband offers plenty of adjustment, so those with large heads shouldn’t have an issue.

Just as with comfort, the SteelSeries H Wireless is just a little below what we’d hoped for when it comes to sound quality.

As per usual the main culprit is over-zealous bass but actually the effect is particularly odd as the bass doesn’t extend all that low. Kick drums and bass lines really standout yet the deepest rumblings in movie soundtracks, for instance, aren’t delivered. The sound is in fact something of a ‘scooped’ one too, with a lack of mid-range and slightly forced treble.

The overall result is that for music listening this headset is, while markedly better than the likes of the £60 Func HS-60, not much better than any other £100 gaming headset. The likes of the Sennheiser G4ME Zero far outclass it while most normal headphones of around £100 also put it to shame. What’s particularly irksome is that sound quality for sources just plugged straight into the headset is atrocious, with it sounding like the whole thing is being played through a brick wall – not one for your walkman. 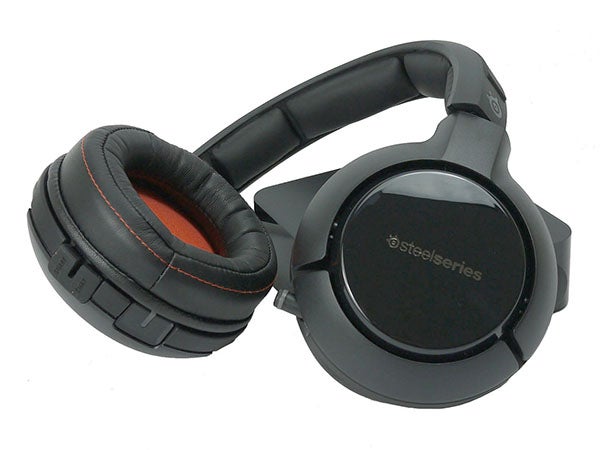 The flipside of this is this sound signature really does work for gaming. We noticed a marked improvement in the positioning and clarity of gun-fire, footsteps and other game effects when compared to the Phiaton PS500 – a headphone that otherwise far outclasses it.

This effect is further enhanced when you engage the Dolby Headphone virtual surround sound mode. Although it still doesn’t offer the sort of audio accuracy of a multi-channel surround sound set of headphones, there is still a marked improvement in sound positioning, which really serves to make you feel more involved in the game.

There are plenty of other audio features too. You can mix the audio levels of chat and the game sound, ensuring you can always hear what you need to. There is is also a host of EQ settings (none seemed to fix the overall problems) and switching between surround and normal stereo is just a button click away.

The little retractable microphone doesn’t offer anything particularly special in terms of quality but is perfectly adequate for voice chat. Moreover it’s really easy to deploy, position and put away, and that on/off system is effortless. 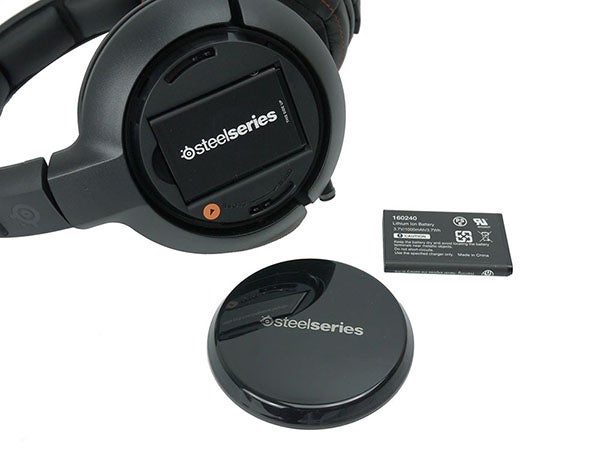 Should I buy the SteelSeries H Wireless?

If you’re looking for an all-round headset that will serve for gaming, music and movie-watching duties then the SteelSeries H Wireless sadly falls just short. For the money it just doesn’t offer the sound quality we’d want for music listening nor the comfort we’d expect for long gaming sessions.

There’s also the issue that if you’re purely looking for a competitive advantage then a multi-channel surround headset may be your best bet.

Otherwise, though, the H Wireless is tantalisingly close to being the ultimate gaming headset. It offers masses of features, is effortless to use and audio performance in games is very good.

Next read our Sennheiser G4ME One review