What is the Sennheiser G4ME One?

Sennheiser
has transferred its excellent acoustic knowledge of headphones to
gaming headsets for several years now. Its latest top of the range
offerings come in the form of the closed-back Sennheiser G4ME Zero and
the open-back Sennheiser G4ME One, which we are looking at here.

You
may expect a bucket-load of bells and whistles for the £189.99 price, but the Sennheiser has kept the G4ME One minimal, and that can
sometimes be a good thing. 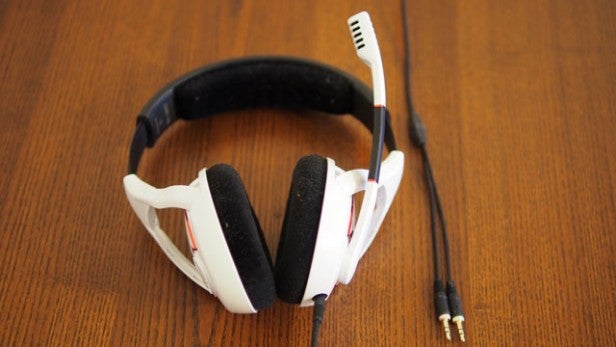 Sennheiser G4ME One: Design and comfort

Made
of white plastic with red and black trim, the G4ME One headset is more a design statement than the grey and black headsets Sennheiser
usually makes. It’s not bad looking at all – one small gripe is that the
velvet ear pads collect a lot of fluff in use.

At a little over
300g the G4ME One is not too heavy but the build quality is solid. The
plastic is high-grade and the ear cups have thin grooves carved into the
metal side grilles, opening them up to improve the acoustics.

Spending
hours at a time gaming in front of a PC with an uncomfortable headset
is no fun at all. But Sennheiser has equipped the G4ME One headset with huge
circumaural, velvety-soft over-ear pads that feel great for long
hours of gaming. The open-back design means air gets in so your ears
breathe and you don’t end up feeling too hot and sweaty. We’ve played
long sessions of Titanfall and Battlefield 4 without needing to remove
or adjust them at all.

The fit is good too. The headband offers plenty of adjustments, and they stay when set. The ear pads clasp your
head firmly and securely without being too tight, and adjusting the headset once it’s on your head is easy.

Controls couldn’t be
simpler. A large volume wheel sits on the outside of the right earcup,
which is ideal for on-the-fly adjustments. One thing we should point out
is that the quality of wheel isn’t on par with previous Sennheiser
gaming headsets. It’s a little flimsier and has some points where it
sticks a little as it turns – it’s an irritant rather than a
deal-breaker. The only other control is on the chunky mic. Lift it up
and a click will signify that you’re muted. Fold it down in front of
your face again and the mic is back on. Simple but effective.

If
you want any more controls to tinker with you’re out of luck. Far
cheaper headsets offer a lot more features, although how useful these
are for the vast majority of gamers is debatable. For example the £70 Turtle Beach PX22
has bass, treble, voice chat and mic volume controls, although
adjusting volume or muting in game is a more intuitive on the G4ME One. 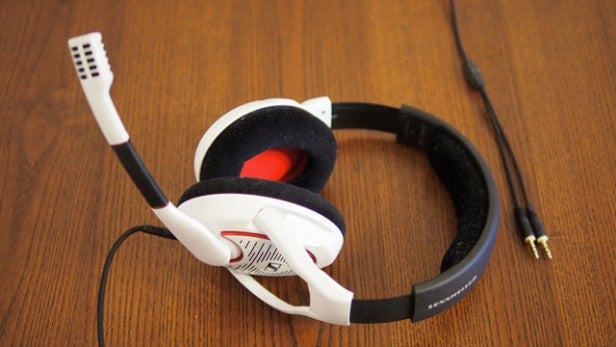 The
final issue is that the mic and the 3m-long cable are non-removable.
It’s unlikely you’ll want to take a headset this large out with you to
listen to music, so the fixed mic is less of an issue, but we’d prefer
to have a removable cable. This would open up being able to choose which
earcup it plugs into, and reduce the risk of damaging the headset by
yanking the cable accidentally. That being said both the mic and audio
cable are very robust and it would take serious force to damage either.

Sennheiser has pedigree in producing quality sound and the G4ME One does not disappoint in this area.

You’d
rightly expect excellent sound quality from a headset at this price and
the G4ME One delivers. Music sounds warm and clarity is solid. You
won’t find any fizziness or distortion even at high volumes and we found
the bass to be thorough without being overwhelming. In addition our bass-shaker test, designed to weed out poor quality
headphones, was pure throughout and lacked any annoying rattle. 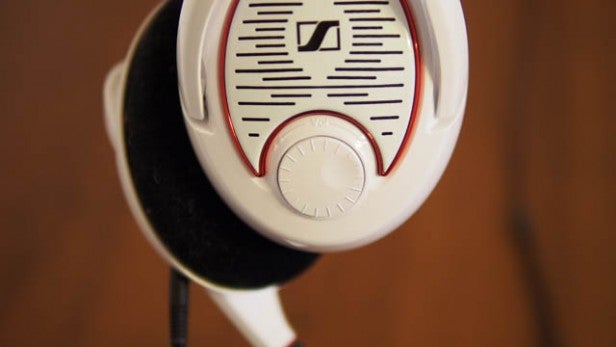 The
experience is similarly encouraging with film. The fight scene between
Batman and Bane in the Dark Knight Rises lets the G4ME One show that it
can deliver clear and detailed dialogue without losing any of the
background noises of the clanging metal walkway or the dripping water.
This is a benefit of the open, wide sound you get with a good open-back
headset like this.

Gaming is what the G4ME One was made for,
though, and we tested it with a couple of fast paced FPSs and the more
atmospheric Bioshock Infinite.

First up was Titanfall,
EA’s recent high-octane shooter. The G4ME One manages to keep the many
crashes, bangs and wallops clearly defined while away from the action
you can hear quiet footsteps approaching from cloaked enemy Pilots –
useful for giving you that slight edge.

It’s when you’re in the massive
robotic Titans that you appreciate what the G4ME One adds to the action.
You are rewarded with a great sensation of scale as each massive
footstep clangs weightily to the earth. This headset is good at sounding big.

In Battlefield 4, whizzing bullets
and explosions are well defined and you have a decent idea of the
direction of gunfire by sound alone thanks to the good spatial imaging of this headset. 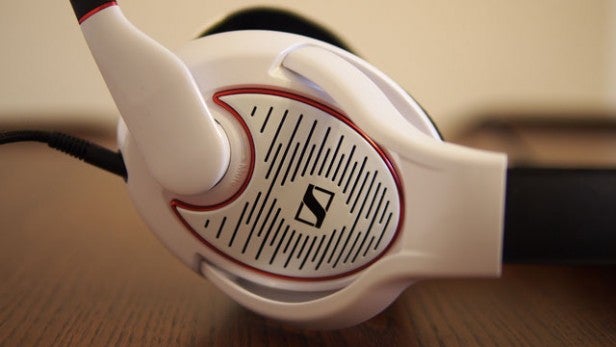 One
thing to consider is that while the open-back design helps the acoustic
fidelity of the G4ME One it also means that sound leaks out and plenty
of ambient noise gets in. It’s useful if you want to keep an ear on
what’s going on around you but you will find that a closed-cup design is
preferable in noisy environments.

Just
like previous Sennheiser headsets the G4ME One comes with a noise
cancelling microphone on a thick, flexible boom. It manages to capture
and convey voice clearly and really keeps background noise to a minimum,
ensuring your teammates won’t get annoyed by what’s going on in your
house.

Should I buy the Sennheiser G4ME One?

The Sennheiser G4ME One falls a little short of achieving a recommended award mainly because the Sennheiser PC 363D
headset is available for just £10 more. It’s comparable in terms of
sound quality and, while uglier, boasts 7.1 virtual surround and acts as a USB
sound card.

If you want to go wires-free you could also consider the Creative Sound Blaster EVO ZxR, which
comes with a host of extra bells and whistles but costs £40 more and
doesn’t quite match the G4ME One for sound and mic quality.

You
won’t be disappointed with the G4ME One headset. It’s comfortable,
sounds great and is as much at ease with music and movies
as it is with gaming. We do feel that it could come with a few extra
features (such as a PS4 adapter) for the price and if you have a little
more to spend and aren’t fussy about looks we recommend you opt for the
Sennheiser PC 363D instead.

Next, read our best games round-up