Sphero’s original app-controlled robotic ball was the perfect basis for a stellar Star Wars BB-8 toy, but the company has recently proven that it can do more than just round. The company’s Lightning McQueen RC car and interactive Spider-Man both show how Sphero can think outside the ball.

The Sphero R2-D2 takes the features of the BB-8 – remote control, app-based interaction and genuine movie sounds – and throws them into the shape of everyone’s favourite pesky Star Wars droid.

The result is a toy and scale model that’ll be loved by kids and adults alike. This R2 unit most certainly doesn’t have a bad motivator.

Compared to the funky Sphero BB-8 and the new darkside BB-9E, Artoo is a big’un. He stands 17cm high, or around two BB-9Es tall. 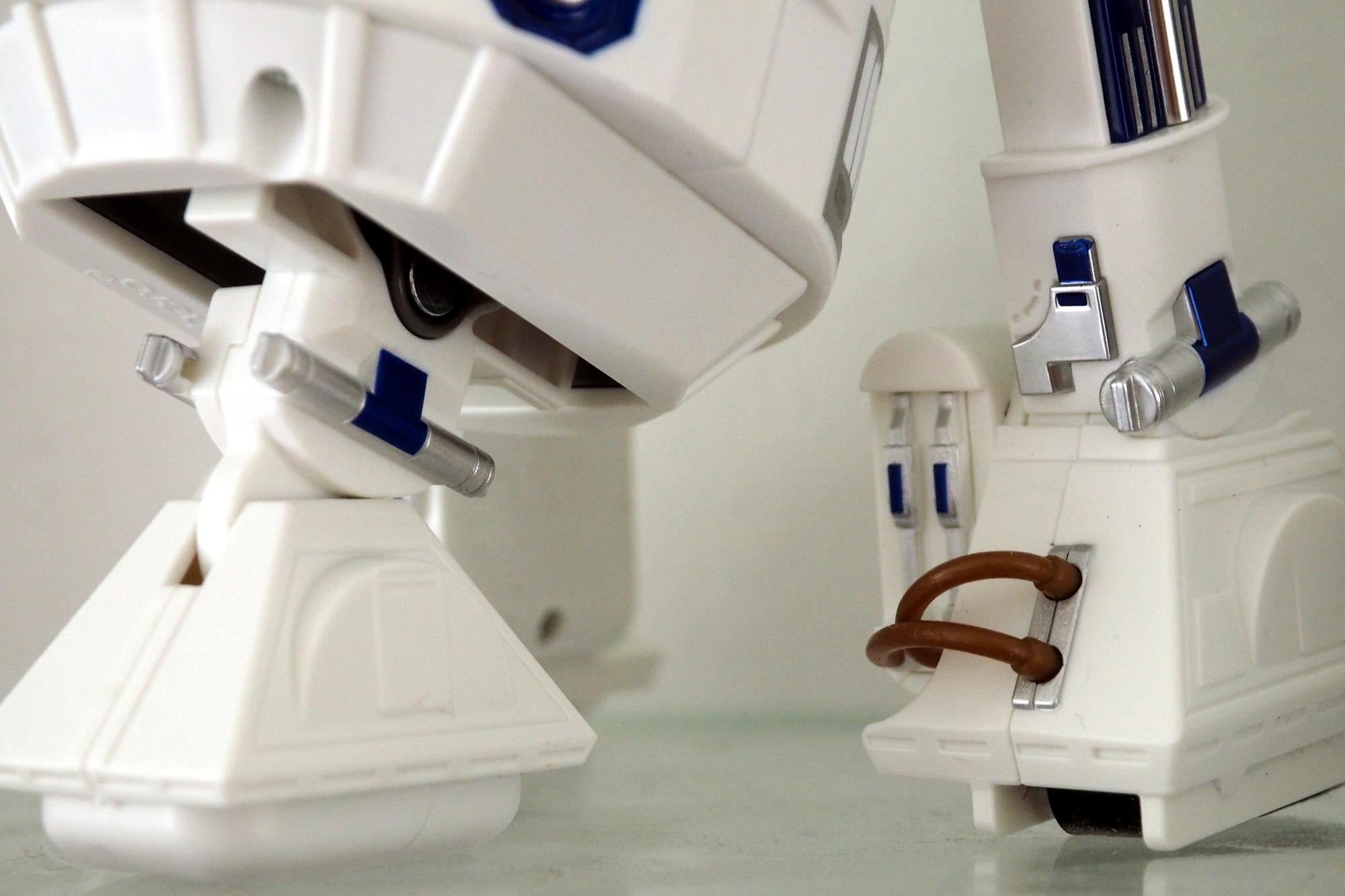 The detailing is superb, right the way down to the rubber hoses on the left and right feet. If you’d bought this as a collectible model to sit alongside your Lego Death Star and replica Rancor tooth, you’d be pretty satisfied.

The only telltale clues to Artoo’s special abilities are a Micro USB charging port on the rear, and the rubber tracks on the bottom of those two main feet. The tracks are 1cm-wide rubber bands that are smooth on the outside and toothed on the inside, driven by nylon gears. 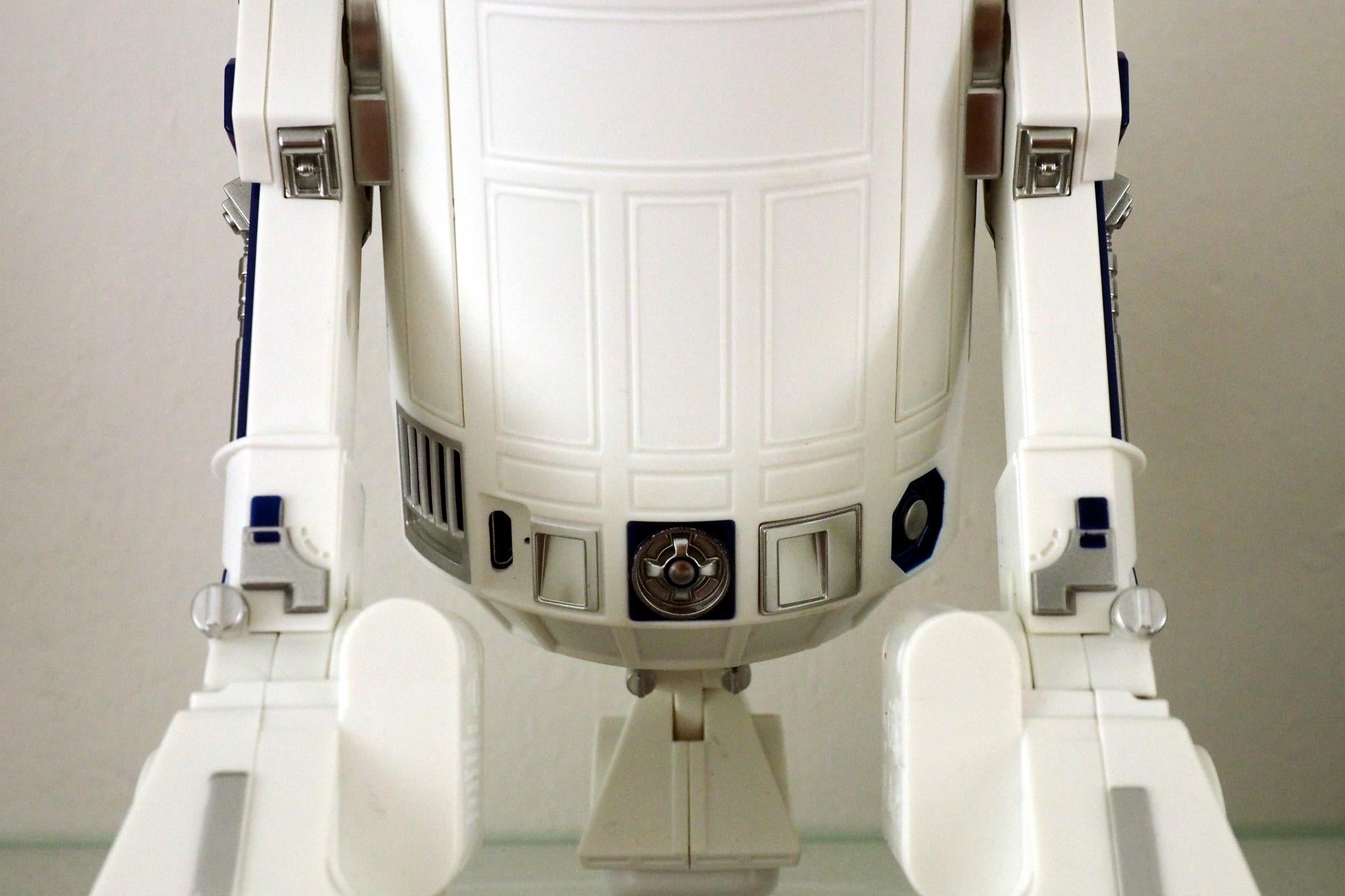 The central leg is retracted into the body when Artoo’s not active, and can’t be pulled down manually. The other legs can’t be moved by hand, either, but the head can be swivelled.

While BB-8 and BB-9E come with a charging dock and a Droid Trainer plinth, R2-D2 is only accompanied in the box by a Micro USB charging cable. It’s a very nice, gold, braided cable, though.

As with Sphero’s other products, this one relies on an app for control and additional features. The app is available for iOS and Android, but not yet for Amazon Fire devices, and it’s the same app for all three of the Sphero’s Star Wars droids – you just switch between them from within the interface.

Connecting to and controlling the Sphero R2-D2 required me to turn on the Bluetooth and location services (GPS) on my Android phone. I also had to give it a firmware update before my first use, which required Wi-Fi. If it’d needed NFC, it would’ve been a wireless full-house. I also connected to an iPad, which didn’t ask for GPS to be enabled, though. 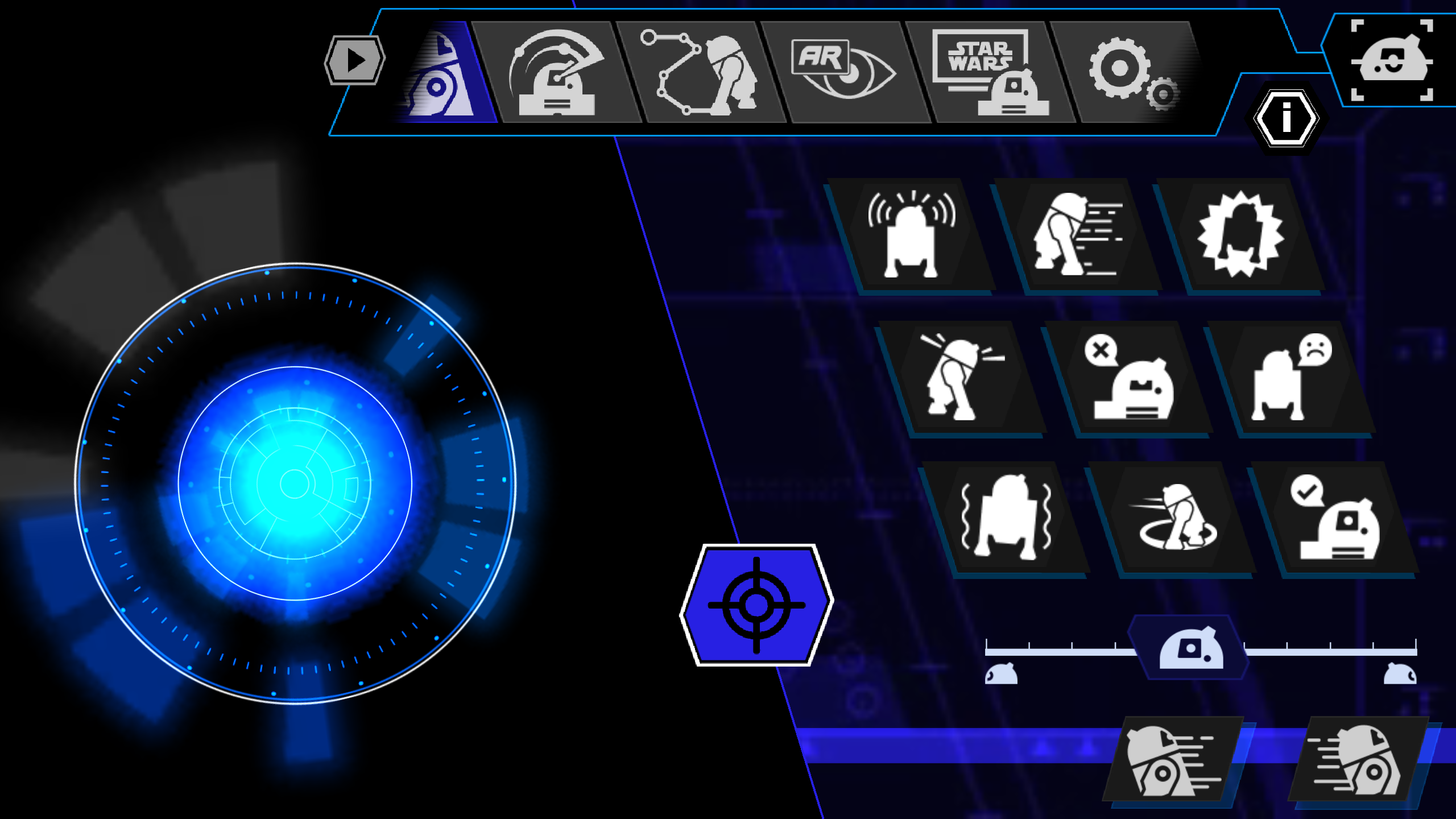 From within the app you can remotely control Artoo’s movements, or choose from a selection of sounds and gestures that echo some from famous moments in the movies. Unlike the BB-8 and BB-9E, R2-D2 has his own built-in speaker, so those sounds come from the droid itself, rather than your connected mobile device.

But there’s a lot more than just RC. Patrol mode gives Artoo autonomy to explore a room on his own – although his collision detection isn’t too wonderful. In this mode you can also connect to other Sphero droids and they’ll all wander around, bashing into stuff of their own free will.

Draw & Drive is a mode that displays a grid in the app, so you can use your finger to sketch a path Artoo has to follow. It’s like programming an old Big Trak, but easier and less boring. There’s also an AR feature that’s, well, more like virtual reality. You get to take a droid’s-eye view around the Millennium Falcon, moving your phone or tablet to look about the ship on the screen, and using on-screen controls to trundle over special info points to read a fact about the ship. When you turn your device, the Sphero R2-D2 also physically turns to match (but doesn’t move forward or back).

Finally there’s a movie-viewing mode, which currently supports A New Hope, Rogue One, The Force Awakens, and The Last Jedi. You connect whichever droids you own and start one of the movies on your TV at any point, leaving the app open. The droids react to certain key moments in the film – Artoo, for instance, wobbles and meeps happily when Finn and Rey first appear in The Force Awakens.

The movie and AR modes won’t work on older devices, however – an original iPad Mini wasn’t supported, for instance. 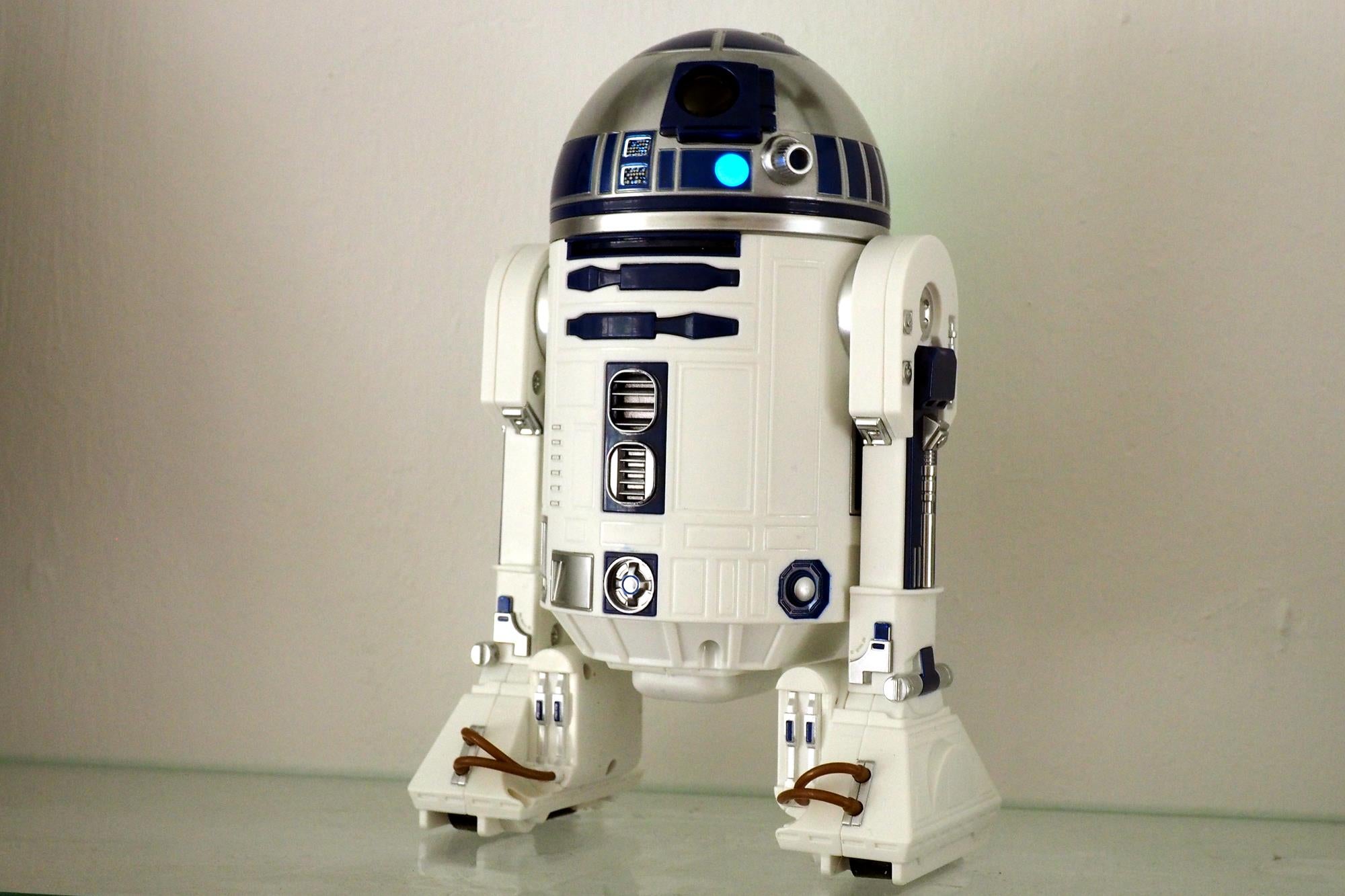 Connecting to Artoo via the app is super-simple – as long as you have your device’s Bluetooth turned on, the app will auto-scan for any Sphero droids nearby. Just tap on the R2-D2 icon to get going.

When you first go into each mode, there’s a handy overlay that tells you what to do – which is good, because Artoo doesn’t come with any other instructions. By default you get taken first into the remote-control mode, where you can calibrate which direction R2-D2 is facing and then use an on-screen touchpad to direct him around.

The movement is excellent on hard floors and thin carpets, and not even too bad on deep pile. R2-D2 is far more manoeuvrable than the spherical droids, turning sharply even at top speed. You can see them in action in Sphero’s promo vid, below.

To the right of the touchpad is a range of buttons to set off some preset actions. Easily the best of these is a recreation of Artoo being shot by the Jawas in A New Hope, ending with him actually falling over. Some of the actions, where the droid retracts his centre leg and stands on just the two, aren’t so great for a deep-pile carpet, though, meaning Artoo unintentionally falls over a little easily.

If you do use Artoo on carpet, I’d also check build-up of fluff in the belts and gears on the feet every once in a while, just to keep it all running smoothly. 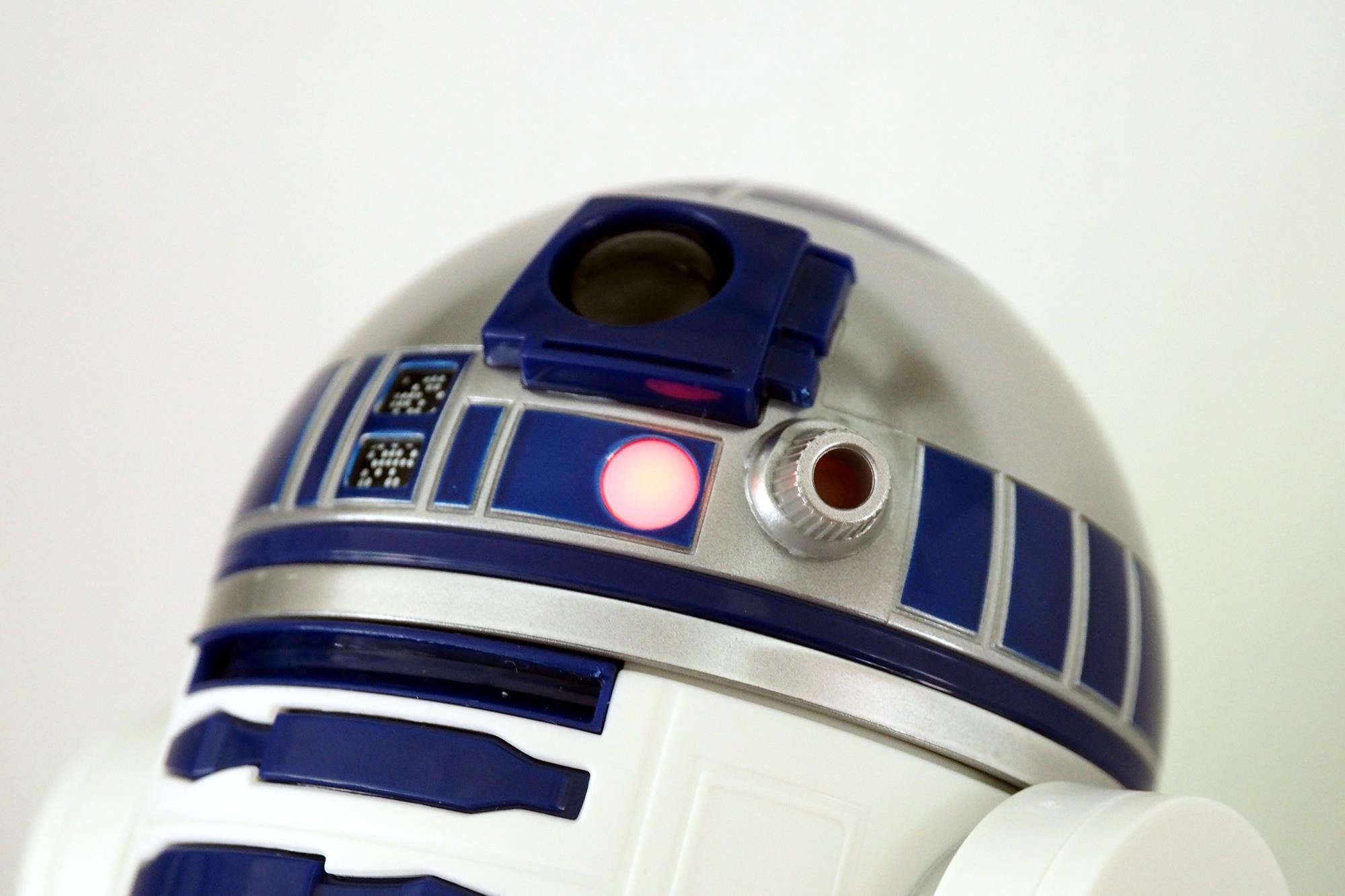 Beneath the action buttons is a slider control for Artoo’s head, which can be swivelled independently. This is another feature R2-D2 has over the other Sphero droids.

The Patrol mode is quite fun if you have multiple droids roaming around, but be sure to go into the settings menu and reduce their maximum speed, or they’ll too easily bash into things before their collision detection can intervene. 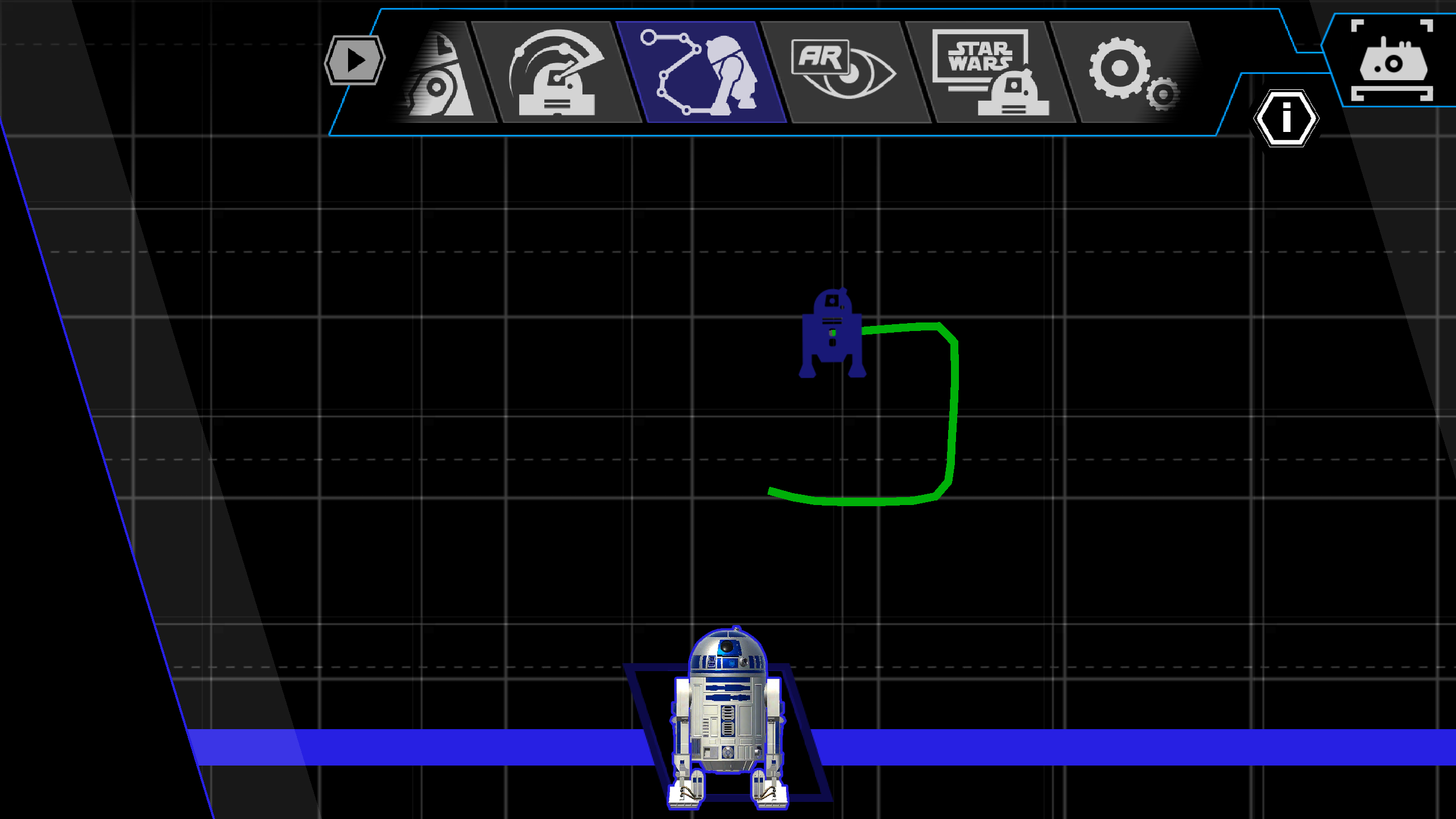 Draw a route with your finger and Artoo will follow it

Draw & Drive mode is probably more fun than it should be, and you can pinch to zoom into the grid so that movements can be made more precise. You might as well just use the normal RC mode, though, eh?

The AR function is a nice little bonus feature, but no more. It feels like a missed opportunity, to be honest. Perhaps in a later software update something could be done to turn it into some kind of game, maybe setting targets to collect stuff or answer questions to get through doors or something. But it’s just an extra.

Watching the supported Star Wars movies with Artoo is a joy, like having a little beeping, flashing puppy alongside. I can’t help but smile when he hops from foot to foot with excitement.

And it’s this character shining through that makes me love Sphero’s little R2-D2. BB-8 may have had that cool rolling body, but in Episode VII at least he just hasn’t shown any signs of personality. Artoo is the droid you’d want with you in a jam.

I really hope Sphero makes a C-3P0 to partner him, even if it’s one that only talks and can’t move, like the Sphero Spider-Man. I’d rather like that gold chatterbot reacting to Artoo’s antics and getting all panicky when BB-9E comes rolling by. Here’s hoping. 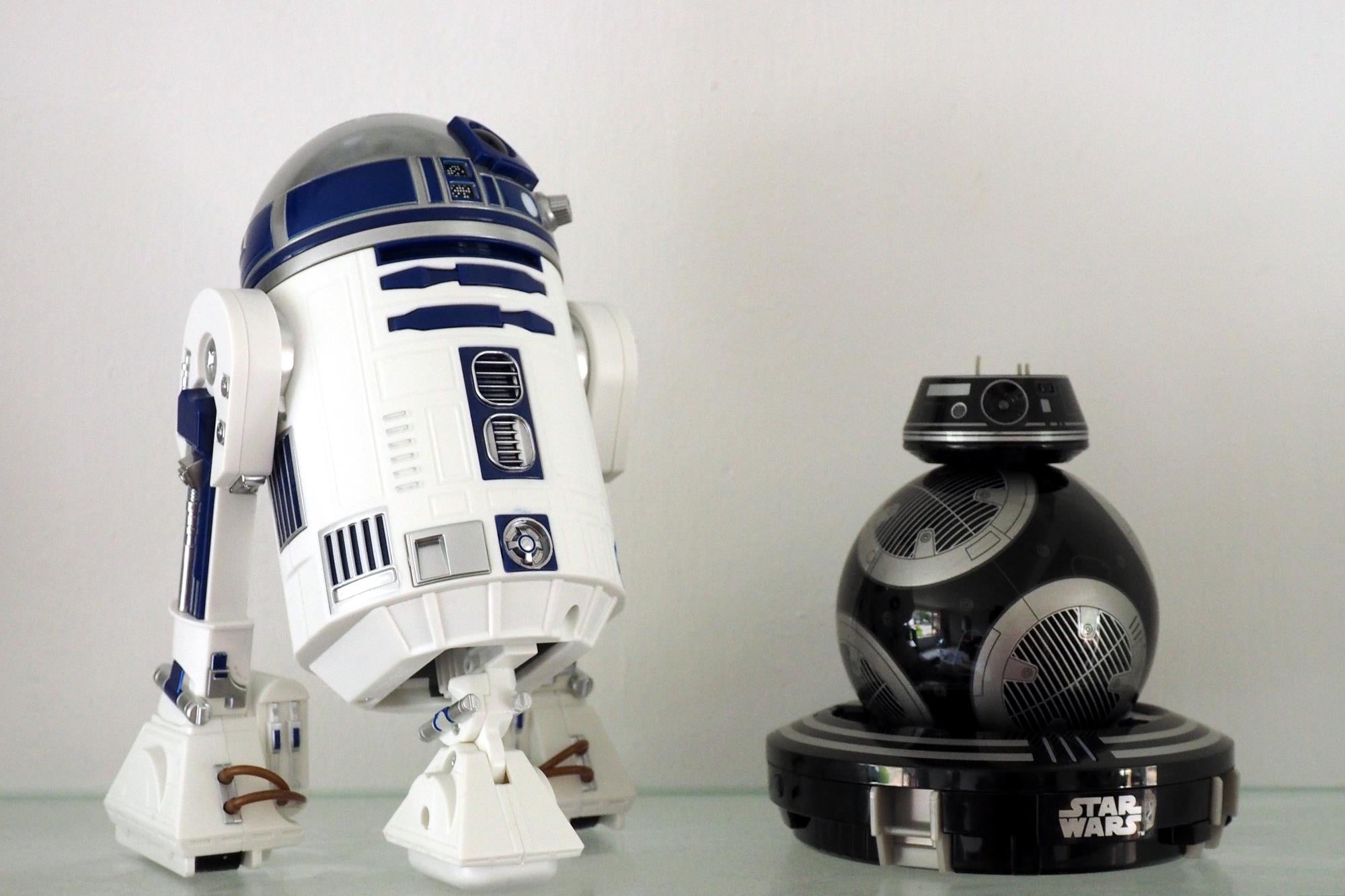 Should I buy the Sphero R2-D2?

The Sphero R2-D2 is a fantastic toy that captures the movie droid’s looks and personality perfectly. Sure, it’s more expensive than the BB-8 and BB-9E, but it’s also almost double the size and manages convey an awful lot more character.

You might think it’d lack some of the wow-factor of those swerving spherical ‘bots, too, but the way it deploys the centre leg and tilts back has its own charm. Its extra manoeuvrability makes it better for small rooms, too.

The variety and depth of the app also ensures there’s much more to this than simple remote control. There’s hours of fun to be had here – and even if you eventually get bored of R2, he’ll look great on a shelf.

The droid you definitely should be looking for. An app-controlled toy that’s full of charm and fun.