What is the Sphero Spider-Man?

From the company that brought us robotic balls, the app-controlled Star Wars BB-8, and an incredible RC Lightning McQueen comes the web-slinging king of sass himself, Peter Parker. Unlike the aforementioned toys, however, the interactive Sphero Spider-Man can’t actually move.

What you get instead is a whole lot of chat. Spidey will tell you awful jokes, regale you with stories, and talk you through missions, asking what you, as his fellow superhero chum, want to do at crucial points in order to foil the bad guys.

It may not have the immediate wow-factor of Sphero’s new R2-D2 and BB-9E droids, but there’s plenty of wisecracking and interactive villain-nabbing to keep it fun for the kids. As long as they can speak clearly enough for the voice-recognition to work, that is. 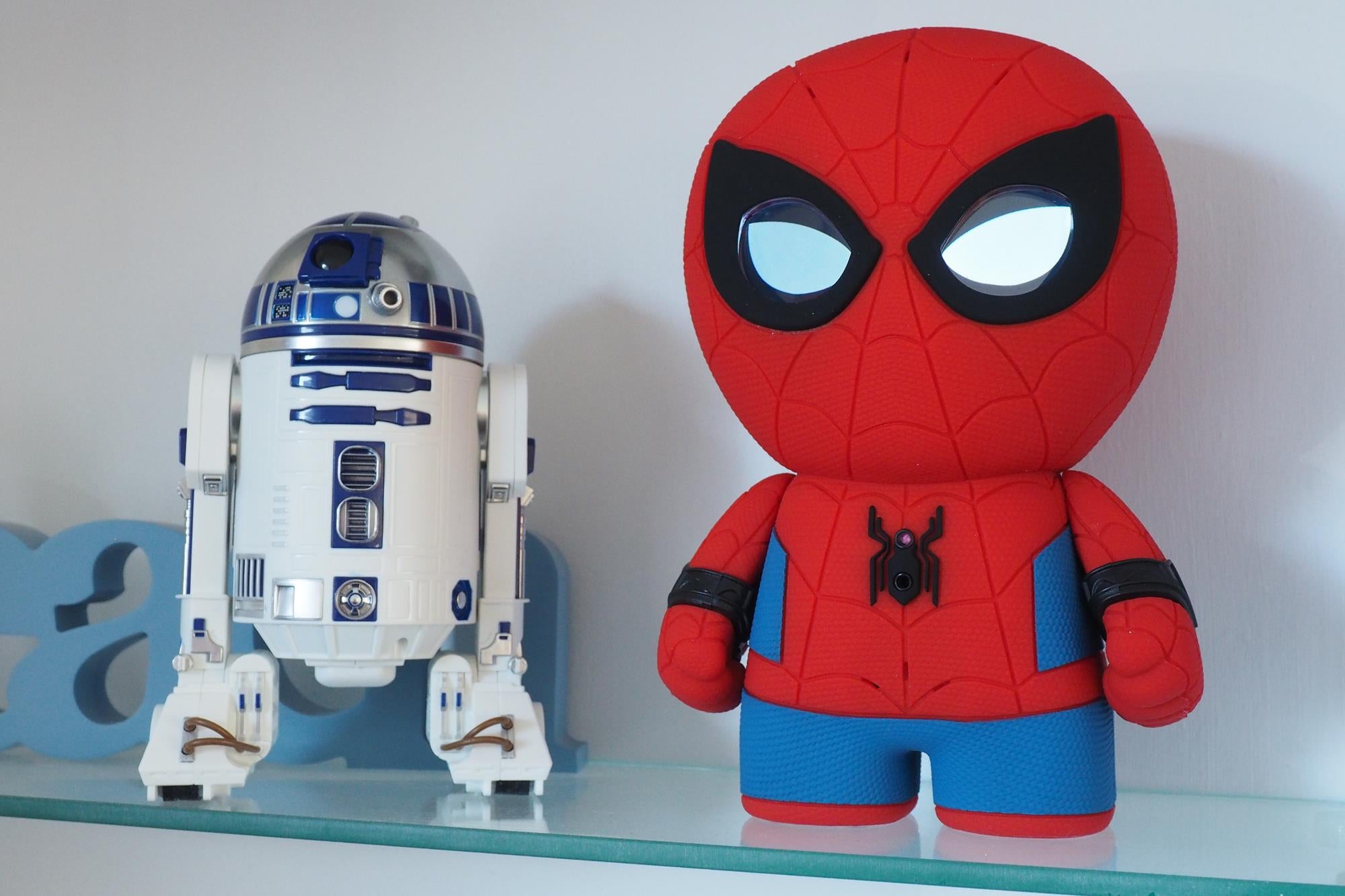 This particular incarnation of the Spandex-clad Peter Parker is styled almost like a Pop! bobblehead. Its enormo-noggin and teensy body are coated in soft silicone, and the whole lot stands 21.5cm tall. Over half of that height is just his massive cranium. Spidey always was a bit of a bighead, though.

The only articulated parts are his stubby arms, which can simply be rotated around 180 degrees. They’re not motorised – you can just swivel them by hand.

His big, black-framed eyes are actually a pair of LCDs, each around the size of a 50p piece. These are so he can form expressions much like the Sphero Lightning McQueen, rather than really convey any useful information. It’s about character, don’tcha know.

The only physical control on Spidey’s body is the symbol on his chest, which is actually a button to turn him on or off, but can be used as a shortcut to a few main functions. All the proper interaction is meant to come either via the app or through voice commands that are picked up by the microphones built into his head. His voice comes from a speaker in, well, probably his waist, but his weird proportions make it seem more like his groin to me. Moving on…

There are also points where you’ll need to move him around with a shake or something – he has a 3D accelerometer inside him. There’s also a motion sensor built into the front, so he can tell when you’re moving, too. 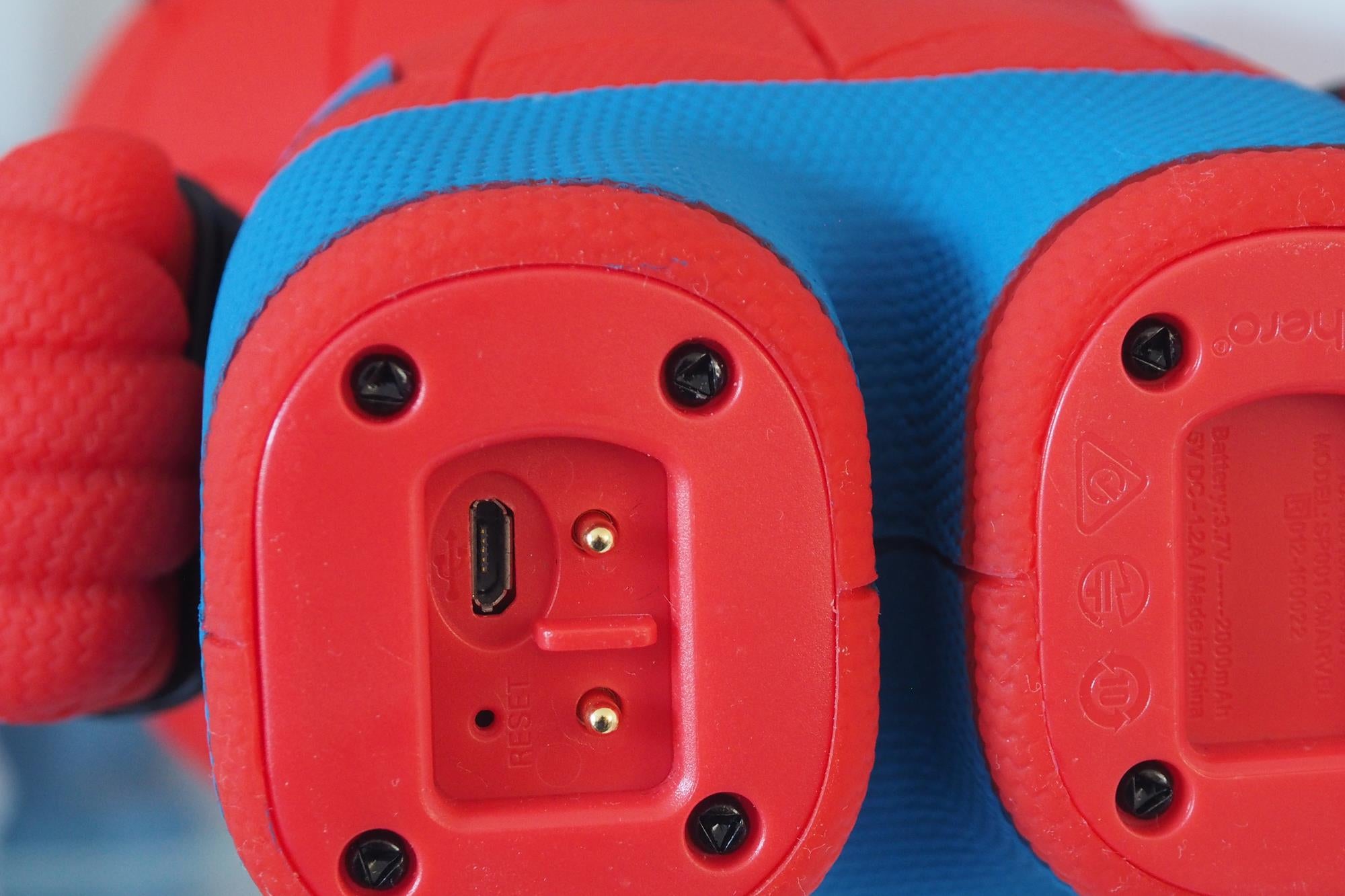 Under the right foot – his right, your left as you look at him – is a charging contact. This means you need to make sure you put him the correct way round on the charging dock, which then connects via a Micro USB cable. You don’t actually need the dock, though, as there’s a Micro USB socket under the foot, too, although you won’t be able to stand Spidey up while you’re using it. 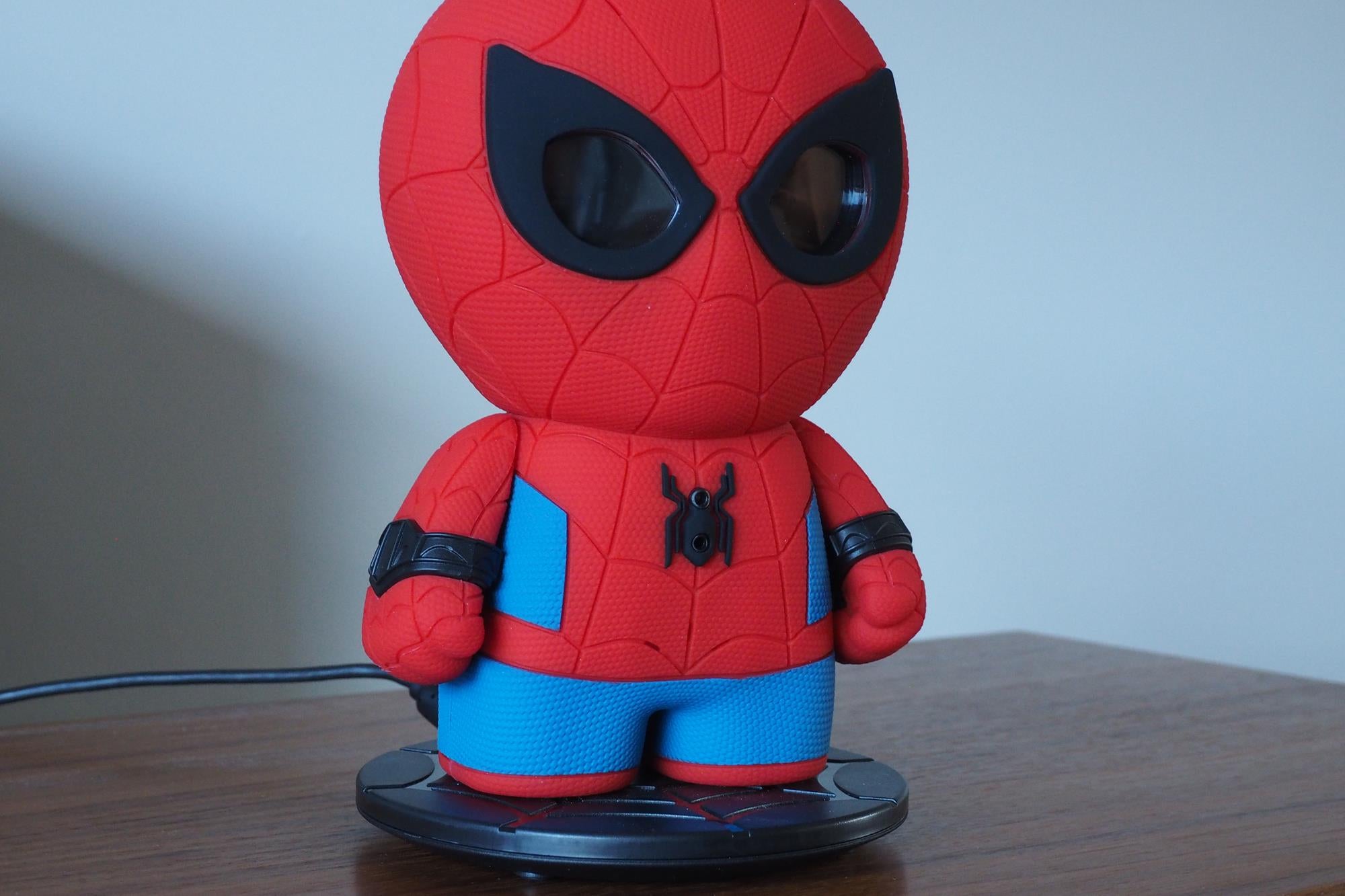 So that just leaves the app, which is, as I’ve come to expect from Sphero, really rather slick. There’s plenty of comic-art charm about it. The app’s available for iOS and Android, but not Amazon Fire devices, and requires a Bluetooth connection to control Spider-Man. You’ll also need Wi-Fi for some of the firmware updates – I’ve had at least two during my time playing with testing him. Sphero Spider-Man – How fun is it to use?

Once you’ve set up a Bluetooth connection to ol’ Spidey – a simple enough process through the app – you’ll need to decide who you are. After all, you’re half of this superhero double-act.

Basically you get to pick a name and choose from a selection of superpowers. It doesn’t really make a difference what you choose, though; it’s just so Spidey says the right words when the time comes. Still, I feel it was important to hear the phrase “Sonic Shark, it’s time to use your Explosive Missiles” at least once in my lifetime. 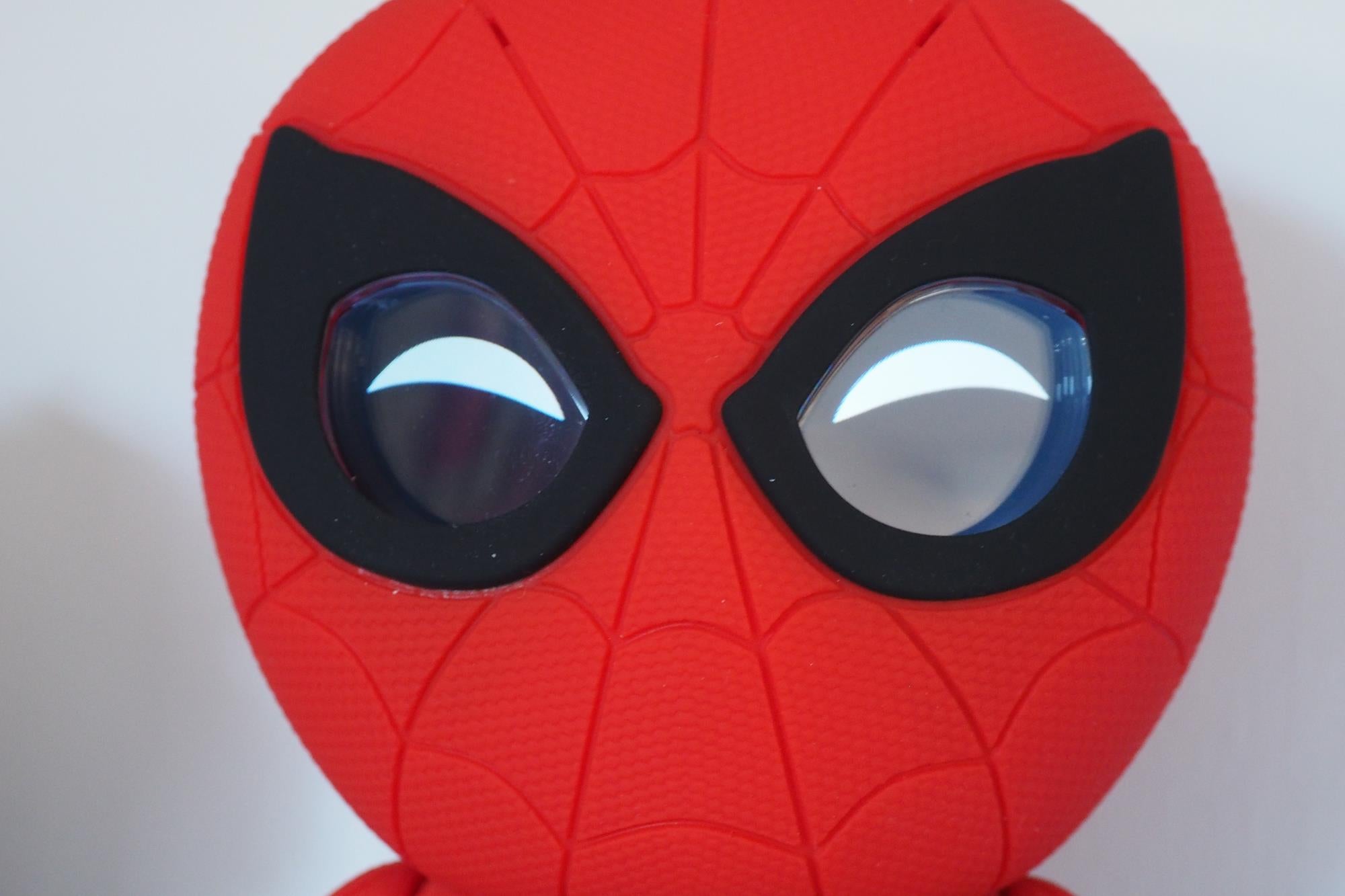 Interaction with Spider-Man is split into three main areas: Team Up, Hang Out, and Fight Villains, each separated into a series of mystery ‘cards’, so you don’t know what you’ll get until the first time you tap one.

Team Up is a set of random games where Spidey describes stuff for you to guess, or helps you decide on a costume and all kinds of other things. Some are really quite fun, while others feel a bit like filler.

Hang Out is split into three sub-categories: Tell me a Joke, Let’s Chat, and Tell me a Story. They’re pretty self-explanatory, really, and mostly involve listening to the little wise-cracker do his talky thing at you. Again, it’s a mixed bag, and the least interesting for kids, because there’s not much real interaction here.

So that leaves Fight Villains, which is the real meat, the main of these three courses, so to speak. This is where you get to make key decisions that mean the difference between catching the crooks or not. And it’s also where you get to use your superpower. 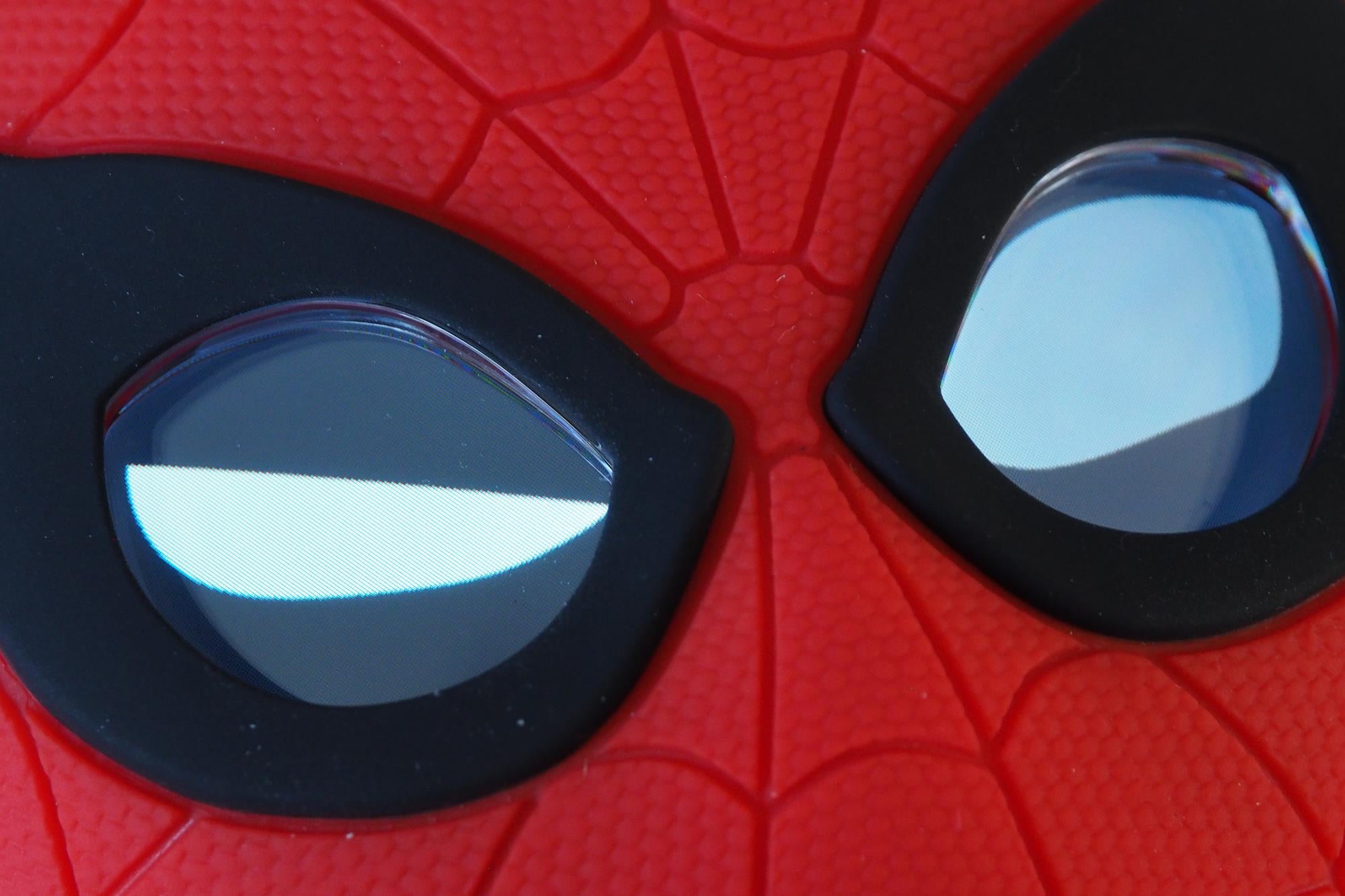 The experience has all been nicely brought to life throughout, thanks to some decent voice acting, snappy dialogue that includes some nice nods to the comics, and those ever-changing LCD eyes that give a ton of personality. There are plenty of missions to get through, too.

The only real issue is that the voice recognition is a little hit-and-miss – especially for younger children who maybe can’t annunciate too clearly yet.

In cases where you need to use your superpower, you can get around this by triggering it through the app, but responses to Spidey’s questions have to be spoken. Perhaps a future update will see the choices appear in the app, so you can just tap them if your friendly neighbourhood Spider-Man no comprende. In the meantime, it can be a little frustrating at times. 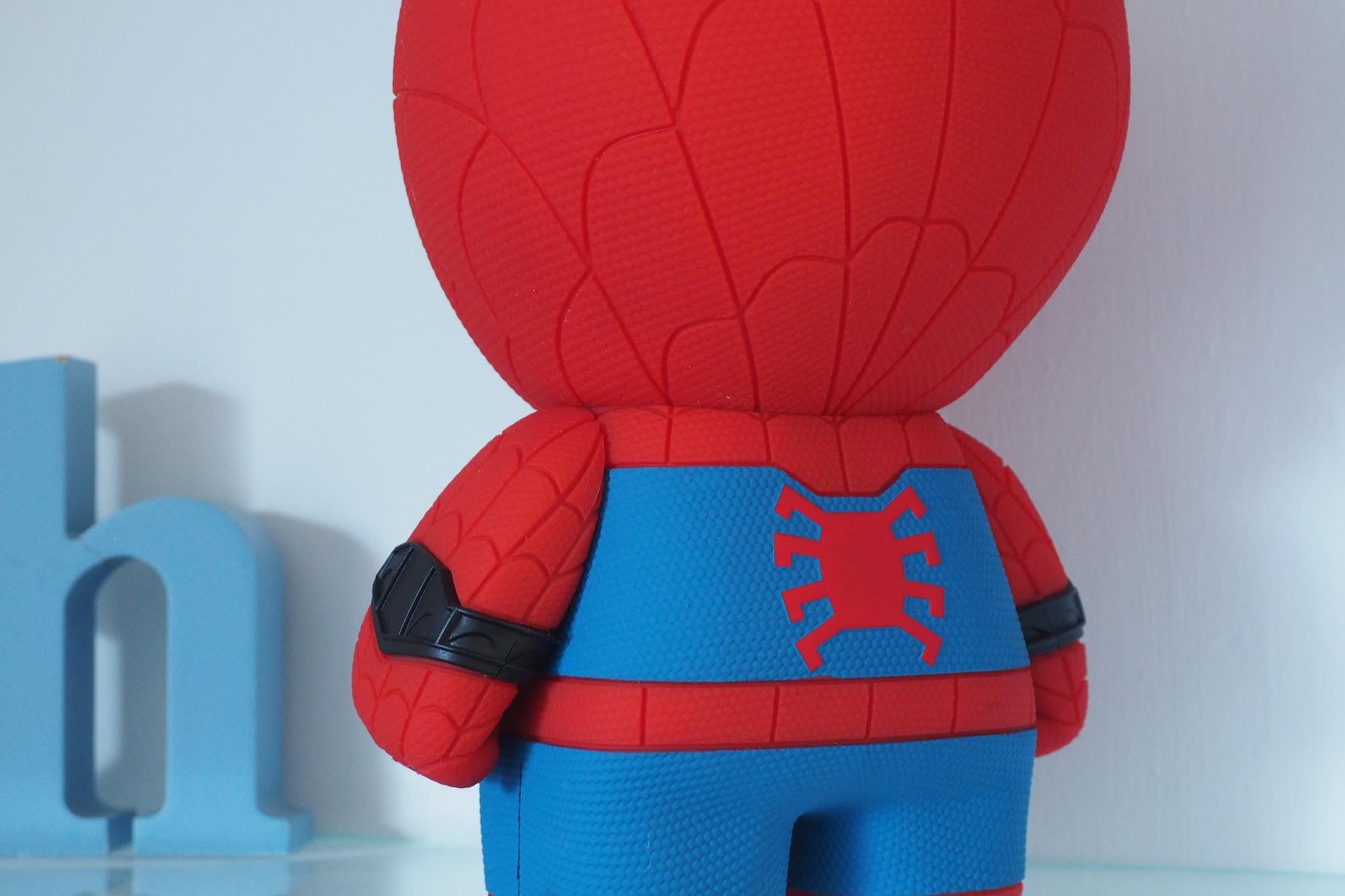 Should I buy the Sphero Spider-Man?

Sphero’s interactive Spidey is a fun companion, and a novel alternative to having your kids sat in front of a tablet or TV. You’d rather they were sociable, right? Even if it is with a virtual being.

Younger children who don’t annunciate quite so clearly might find the voice recognition too patchy, however, and it also struggles if there’s background noise.

You generally get a very slick experience otherwise, going most of the way to justifying the big price tag.

A really fun interactive Spidey toy, as long as your kids speak clearly enough for the voice recognition to work.