Spaced360 is a Bluetooth speaker with a difference. Rather than pumping sound out of a driver or two, it has three speaker units, all facing outward in different directions.

The idea is that it can offer the same audio experience to everyone in the room, not just the lucky person in the speaker’s sweet spot. It’s a clever idea, and one that works pretty well. But as is so often the case with portable speakers, you do pay for it. The Spaced360 speaker costs £250.

Where some wireless speakers are designed to be carried around with you, the Spaced360 is something that will usually stay at home. It’s happy to move from kitchen to garden to lounge to bedroom, but its chunky body and slightly awkward shape mean it is not super-portable. It is a bag-filler.

Its tri-sided design is easy to lug around in-hand, though, and the Spaced360 feels pretty sturdy. It’s not fully ruggedised but there’s some weight to it, and while the driver units appear to be exposed, they’re made of a plastic material rather than the usual paper fibre. Kids can prod them (as kids will do) without causing damage. 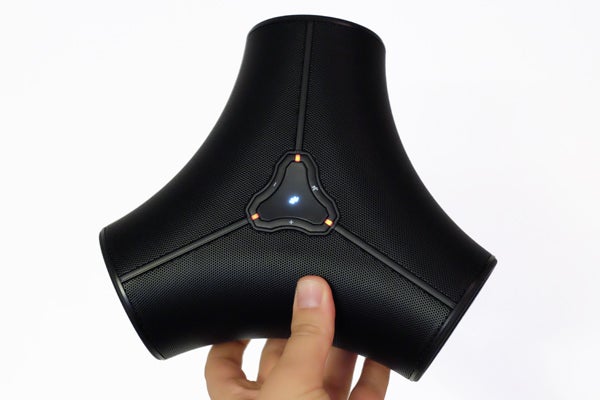 Need even more protection? You can get rubber coats for the Spaced360 that give it some impact protection. They don’t provide waterproofing, but a speaker with coat feels like it could really take some beating.

Perhaps the best design element of the Spaced360 in practical terms, though, is the charger base. The speaker fits into a stand that charges the internal battery as soon as you plonk the thing down. It’s a perfect setup if the speaker is going to make its way gradually throughout your house, before coming home to the lounge for a recharge.

The battery is rated for up to 12 hours use. Crank the volume up high and you’ll get less, but it’s a very respectable figure for what is a more powerful-than-average speaker.

Features-wide the Spaced360 is strong too. You get Bluetooth with aptX, and NFC for easy pairing. You can more-or-less control the speaker from your phone or tablet, but there are a few buttons up top too. You can change the volume, and there’s a mute button if you need to cut out the music quickly. 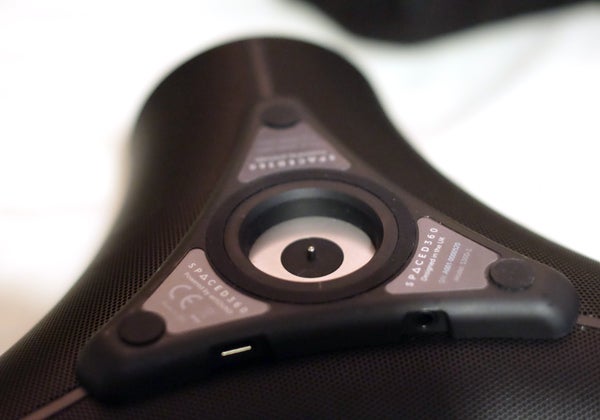 The Spaced360 has three active drivers, each facing in a different direction. It’s not about stereo – each speaker pumps out both the left and right channel information – but about dispersing the sound as wide as possible.

Most portable speakers have pretty poor sound dispersal as normal cone shaped drivers output sound in a relatively narrow arc. Using three drivers and clever DSP (digital signal processing), the Spaced360 is able to fire out consistent sound across 360 degrees. It’s the highest treble frequencies that alter a little as you move about.

It is possible to overstate the importance of very wide dispersal, though – it’s not as if you can’t hear a speaker that is pointed away from you – but does come in extremely handy if you have a room full of people wanting to listen to music. 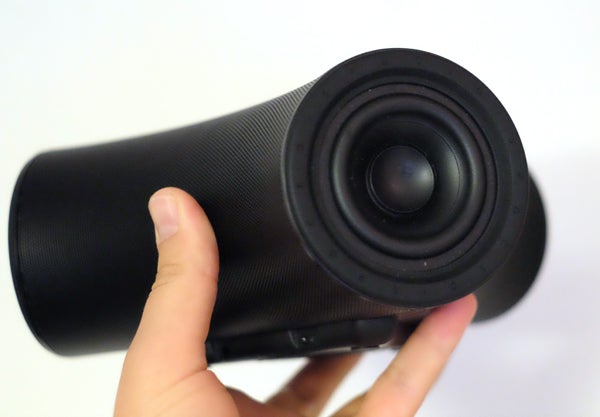 The Spaced360 is not really a party speaker, though. It’s more suited to smaller gatherings. Its drivers are only two inches across, and while each is paired with a passive radiator – used to produce bass in a smaller speaker enclosure – there’s only so much you can reasonably expect from it.

Among Bluetooth speakers, the Spaced360 is loud and quite powerful-sounding. Its perfect use might be a BBQ – it has the volume to provide the tunes when everyone gets a bit drunk, and here the 360 degree sound is even more useful.

General sound quality is good, but we have heard better sound at the price. The small active drivers are not really large enough to produce convincing mid-range output, meaning you don’t get the rich warmth of a larger speaker, and vocals can sound slightly nasal. The treble and upper-mids can also get slightly strained at top volume – again proving that the Spaced360 is best suited to fairly relaxed listening. However, sound balance is otherwise good, with none of the juvenile bass output you get with some wireless speakers. It’s classier-sounding than the unusual look might suggest.

Still, if you’re not too bothered about the 360-degree element, the Loewe Speaker 2Go has more refined, detailed and smoother sound for £20 less. It’s a much more traditional speaker, firing out in the one direction.

We wouldn’t recommend the speaker as something to take on duties as your main lounge music-makers. We don’t think its makers want you to think this either, but for £250 it’s what some people may expect. 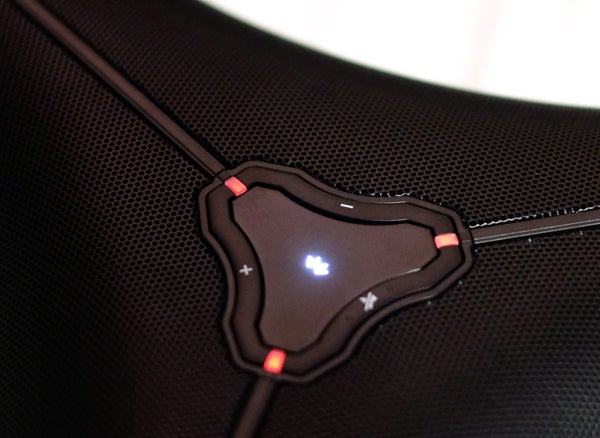 Should I buy the Spaced360?

The Spaced360 is a very interesting speaker. It has an extremely convenient charging dock and its 360-degree sound dispersal means you can place it in the centre of a room and provide good sound to everyone in it. It works.

However, like almost every wireless speaker, you do need to care about this kind of convenience for it to be a remotely sensible buy over a more conventional speaker system or non-portable wireless setup.

The Loewe Speaker 2Go offers more refined sound, and if you’re just out for something to fill your living room with sound, there are better choices at the price too. These days, you can get an Arcam rCube for the same price, and in pure sound quality terms there’s no competition. However, among its direct competition, the Spaced360 is among the better-sounding speakers.

The Spaced360 is an unusual wireless Bluetooth speaker that scores extremely high for its domestic convenience. Sound quality is decent, but as is often the case with Bluetooth speakers, it won’t cause any jaws to drop.