What is the Loewe Speaker 2go?

Loewe is renowned for producing terrifyingly expensive home entertainment kit. Its latest 45-inch TV costs around two grand, and that’s no cutting-edge 4K set either. The Loewe Speaker 2go sees the brand come back down to earth a bit. It’s a wireless Bluetooth speaker that, at £269.99, doesn’t cost much more than competitors from Bose and Philips. It’s still not cheap, but it does sound good. 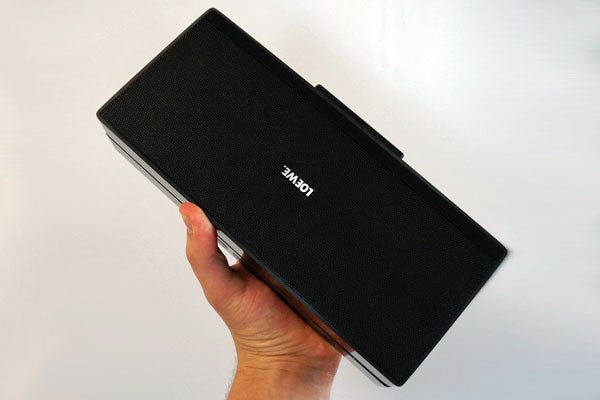 The Speaker 2go is around the same size as the Bose Soundlink and Philips Fidelio P9. This is no mistake. It has become a standard size for a mid-size wireless speaker – small enough to grasp in one hand, but large enough to supply good sound quality.

The design of the Loewe Speaker 2go is slightly different from these rivals, though. Where those speakers are both angled backward slightly and have a flap that flips around to cover the front speaker grille, the Speaker 2go is a simpler brick of metal.

From a distance, the black version in particular version (white edition also available) can look a little like it is made of glossy plastic, but get your hands on it and the Speaker 2go feels tough as anything. Its outer shell is aluminium, while both the front and rear are flex-free coated metal grilles. 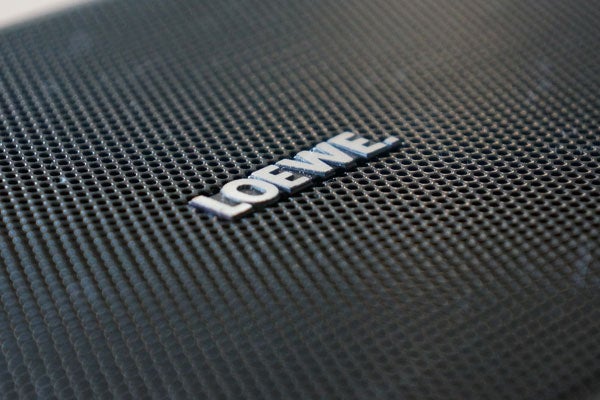 It’s reassuringly heavy too at 1.3kg – the Loewe Speaker 2go is a block you certainly wouldn’t want to fall on your head.

Although it appears very brick-like, it can also be tilted backwards like the Bose Soundlink. There’s a little push-to-extend rubber foot on its underside that angles the speakers’ output closer to head height. It’s not terribly elegant, but it does work.

There are also some nifty features hidden in its shell. This is primarily a wireless speaker, using Bluetooth as its main means of taking audio from your player/phone. It has aptX support for high-quality Bluetooth streaming, and NFC to make sync’ing with a phone or tablet easier. 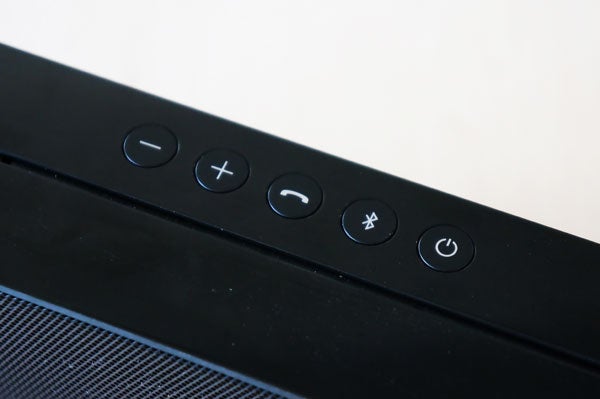 Using NFC, you’ll be able to hook up with a phone or tablet with just a swipe over the clearly-marked sensor once paired. However, your phone is only likely to have the feature if it was released in the last year – and the iPhone 5 does not have it.

There are a few more traditional features in the Loewe Speaker 2go, too. There are old-school clicky button up top to control volume, power and to receive calls – another neat extra is that the speaker features a microphone, letting you use it as a conference call system.

Around the back are a 3.5mm aux input to let the Speaker 2go connect with non-Bluetooth devices and a USB port, letting you charge other devices using the speaker’s battery. However, this is likely to eat into the unit’s stamina, which is hardly miraculous at around eight hours (conspicuously matching the Bose Soundlink).

What you don’t get with the Loewe Speaker 2go is Wi-Fi, also ruling-out AirPlay streaming. and streaming beyond the range of Bluetooth, which often conks out after 5m or so depending on the environment. However, it’s no terrible loss when the Speaker 2go excels in places that tend not to have Wi-Fi, and most devices with Wi-Fi have Bluetooth anyway. 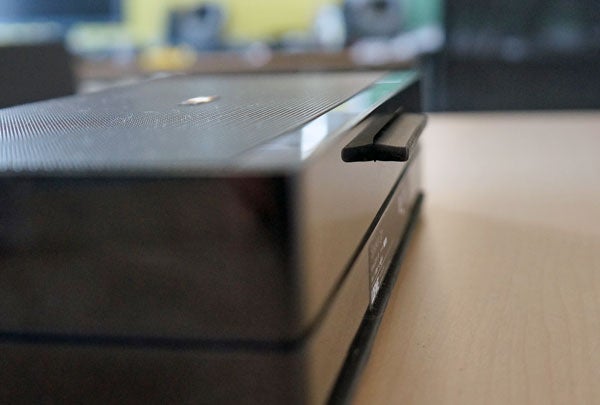 The biggest success of the Loewe Speaker 2go is its sound, primarily because it manages to cram in a pretty respectable array of speakers into its small frame.

The difference between a passive radiator and the active speaker driver of the Speaker 2go is that it’s powered. It has its own amp section where a passive radiator is powered by the air output of the other drivers in the enclosure. Radiators are effective at providing that low end thwack to a small box, but a bass driver brings better tonal fidelity.

It’s not just about the perceived volumetric ‘space’ of the low-end here – there’s some refinement too.

Of course, with barely any speaker enclosure space, the bass driver of the Speaker 2go does need some help. It uses a bass reflex system that passess the air output of the bass driver though a folded tube, acting a bit like the ‘intestine’ of a brass instrument, before passing it out the permeated rear of the Speaker 2go – the back grille isn’t just there for the look. 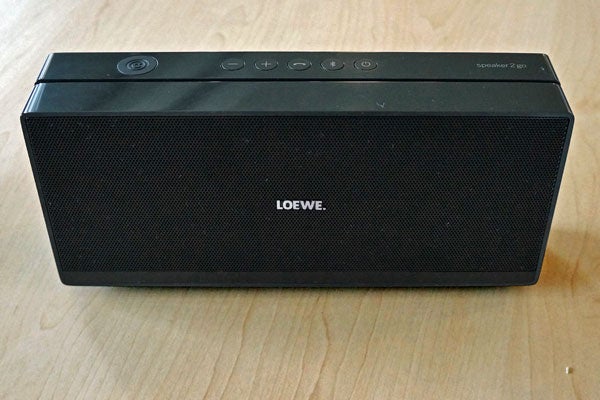 For a speaker of this size, sound quality is excellent. Treble detail is great, the bass is tonally rich and there’s no grea big gap in-between as we’ve heard with some wireless speakers that rely on a bass radiator system.

We’re also extremely glad to report that there’s no ugly bass distortion at top volume (again, this can happen with radiator speakers, although the Bose Soundlink avoids this by using two radiators facing each other).It only struggles in mid-heavy music, exhibiting as ugly noise in vocal tracks at certain volumes. It’s a symptom of treating a driver not all that much larger than a hi-fi tweeter as a ‘full range’ driver. However, this only seems to crop up occasionally.

The sound is a little less bass and mid-heavy than the Bose Soundlink, making it sound less rich, but the bass response is more refined and controlled – this is no surprise given the differences between Bose’s dual radiator and Loewe’s active driver systems. 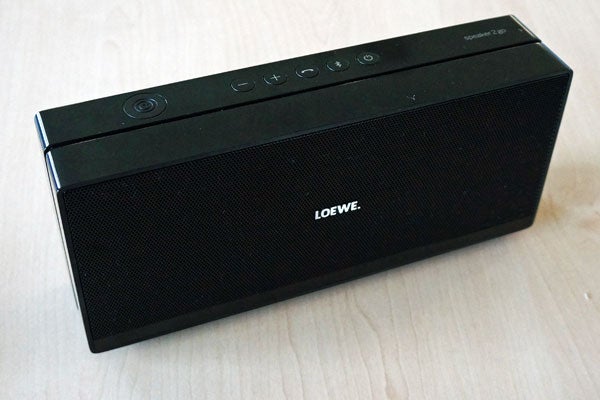 Should I buy the Loewe Speaker 2go?

The Loewe Speaker 2go is a top class wireless speaker that holds its composure and does justice to its maker’s name. It is absolutely a match for its main rivals, the Bose Soundlink and  Philips Fidelio P9, although we do miss the protective front covers of those speakers at times.

You do need to care about having a speaker this size for it to be considered a top buy, though. Loewe’s spokesperson was keen to point out that – unlike most of Loewe’s gear – the Speaker 2go isn’t significantly pricier than the ‘normal’ competition. That’s only because wireless speaker have managed to cast themselves as expensive ‘premium’ gadgets. Let’s not forget, you can get an Arcam rCube for around the same price.

If a high-quality speaker that can easily follow you from room to room, from garden party to barbecue, is just what you’re after, this is a fantastic solution. Still, if you don’t care about the extra features and don’t mind a slight drop in fidelity, the £100 Cambridge Audio Minx Go is an attractive alternative.

The Loewe Speaker 2go is a top-quality wireless speaker that offers excellent sound quality and bags of features.  Like its rivals it doesn’t come cheap, but the sound you get per cubic inch is impressive.