What is the Sony Xperia XZ1 Compact?

When it comes to smartphone sizes, bigger isn’t necessarily better. As such, Sony is one of the few companies still releasing smartphones that are on the smaller side.

The Xperia XZ1 Compact is the latest addition to the Compact series – but, unlike last year’s mid-range deviation, Sony is back packing flagship specs into a tiny 4.6-inch form factor.

So while you might be willingly sacrificing screen size for pocket-friendliness, you won’t have to give up on Snapdragon 835-level performance nor some of the camera tricks on offer from Sony’s more sizeable models.

It feels like quite some time now that Sony has been pedalling the same phone designs – for better or worse. And if you’ve held a Sony Xperia phone in the past odd years then you’ll largely know what to expect from the XZ1 Compact.

You’ll be in familiar territory with the squared off edges and sharp corners of the device. For a small phone, the XZ1 Compact is surprisingly thick at 9.3mm, but this lends it a robust feel. This is despite Sony moving away from the aluminium body of the Xperia XZ1, replacing it with a woven plastic material. 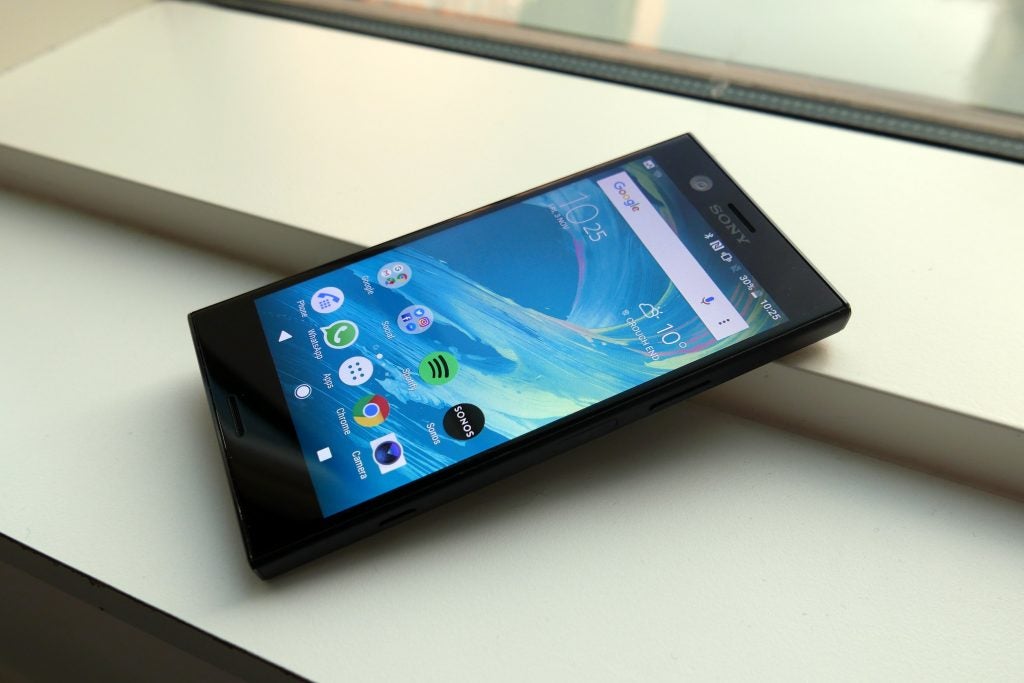 Even though it’s plastic, the phone feels nice in your hands – and not at all cheap, as is often the case with such a finish. There’s a slight texture and roughness to it, which helps you keep a good grip of the handset. The black review model also didn’t pick up greasy fingerprints or micro-scratches – often an issue with metal or glass. If black isn’t your preference, the XZ1 compact is also available in silver, blue and pink.

Nowadays, there really aren’t many rival phones that can be used comfortably one-handed. Next to other modern phones, the XZ1 Compact looks adorably tiny.

I’ve got small hands and experienced no problems reaching the top and bottom of the XZ1 Compact’s screen. However, this isn’t without a degree of discomfort, as a result of the sharp corners and edges. Sharp enough to jut out of your pockets if you’re wearing tight jeans, or poke the palm of your hand in use. 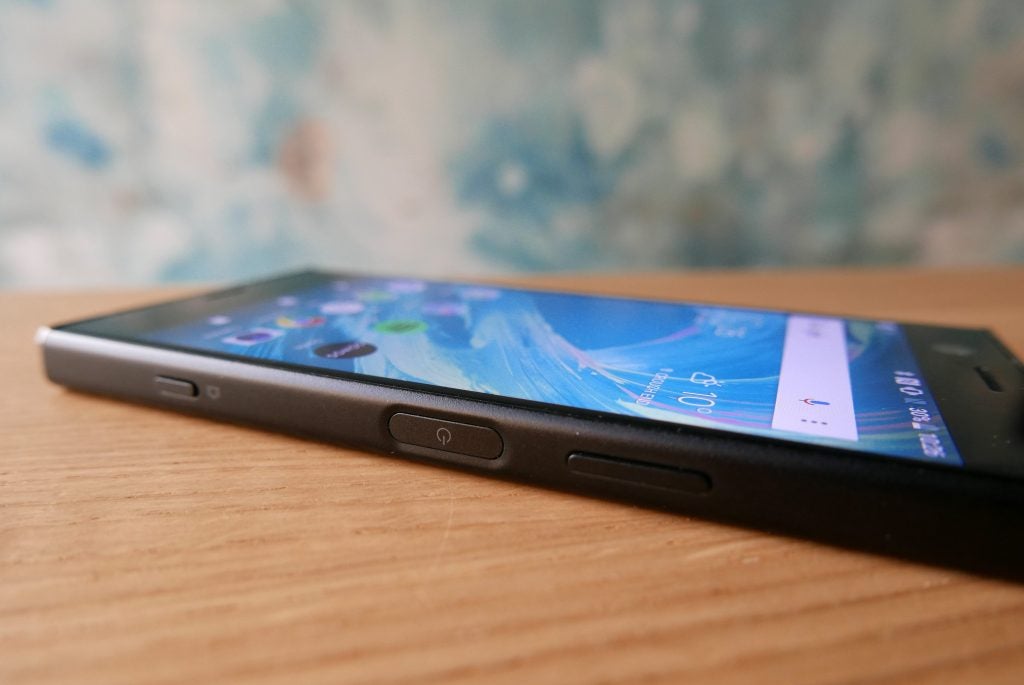 There’s a thin sliver of what feels like metal across the top and bottom edge of the device. Having accidentally dropped the XZ1 Compact during the testing period on a hard gym floor, two of the corners are chipped as a result. This unintentional drop test suggest that the edges of the phone aren’t the most resilient, even if the rest of the handset feels well made.

You’ll find all the buttons on the right edge of the device. There’s a volume rocker, which I’d have preferred was a little larger since it’s fiddly to use. Below this is the lock button, which is indented slightly to make it easier to find. It’s one of Sony’s embedded fingerprint sensors (at least on the UK model – no such luck in the US, oddly). 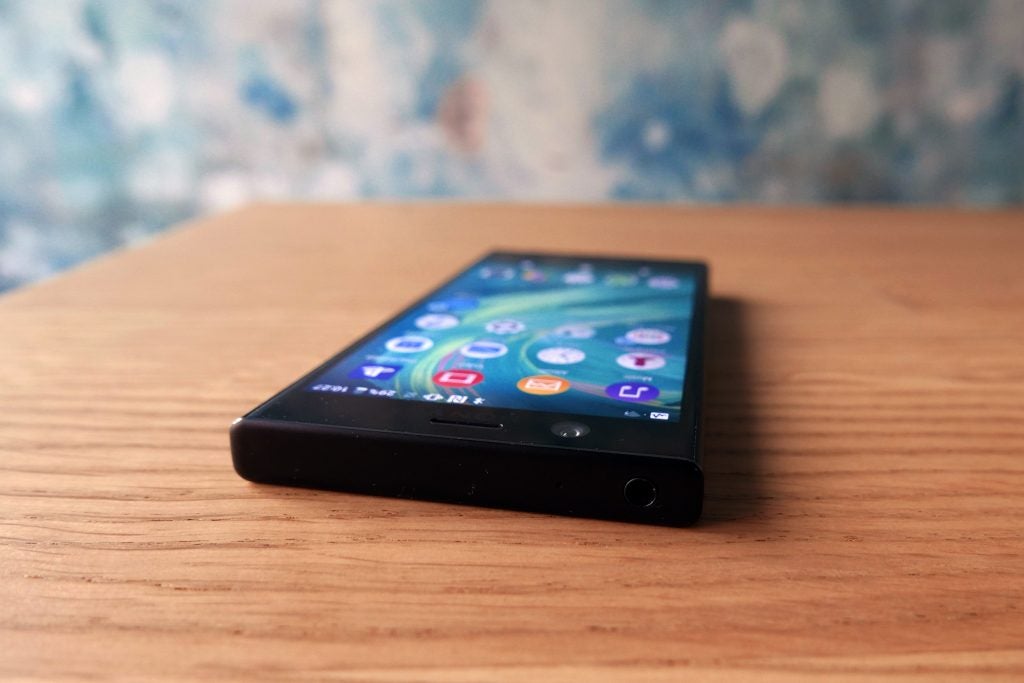 I found the scanner reliable and quick, although as is the case with most such units, wet hands still prove a struggle. Its placement is good, too. I actually prefer it to both front and back scanners; it lets me unlock the phone quickly regardless of which way I’ve put the phone down.

Below the scanner is a tiny camera shutter button. It isn’t the greatest shutter button I’ve seen, since the actuation doesn’t really ape a proper shutter button in terms of feel or size. There’s a half-press function for autofocus, but it feels a little fiddly. The button acts as a shortcut to the Camera app, however, which can be handy. 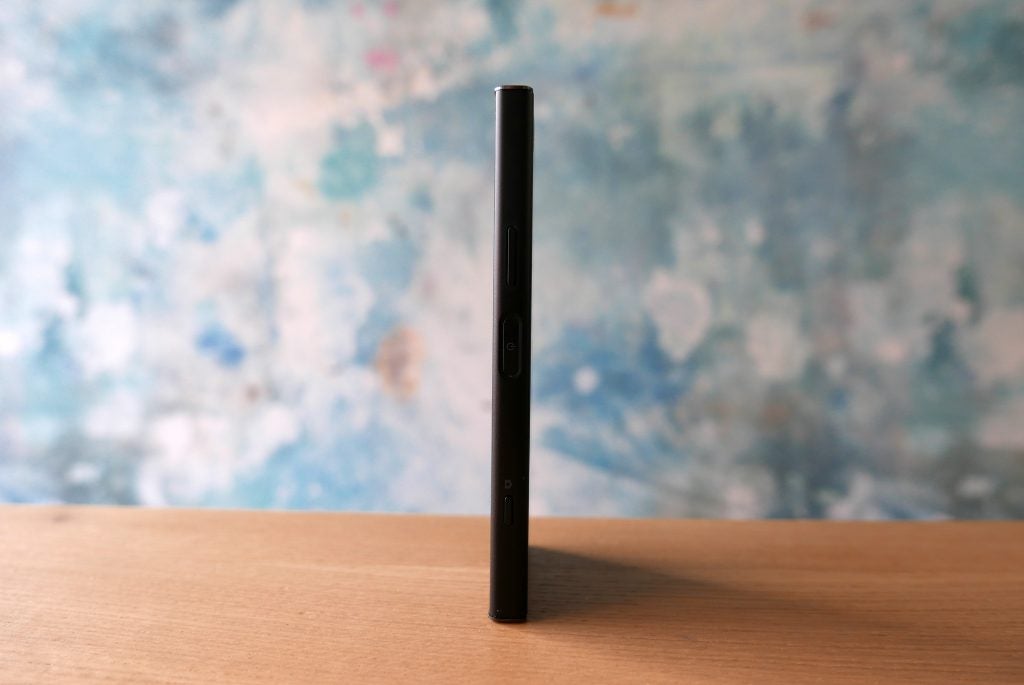 On the left-hand side is the nano-SIM port and a microSD slot for upgrading the somewhat meagre 32GB of storage. Up top a headphone jack remains, and on the opposite end you’ll find a USB-C port for charging. Surprisingly, there’s no wireless charging option, despite the phone body being made from a material that would facilitate it.

You do get  IP68 waterproofing, however, which was disappointingly absent in the previous Xperia Compact phone.