The VW550ES delivers the most instantly impactful pictures I’ve ever seen from a projector that ‘only’ sets you back four figures.

For starters, feeding UHD Blu-rays through the VW550ES onto a reference 100-inch screen produces pictures that are simply dripping in detail. Even the most ardent 4K naysayer would have to admit that a good-quality 4K source looks vastly crisper, cleaner and more polished than even the finest HD source.

This crispness holds up when there’s a lot of movement in the frame too, thanks to the VW550ES’s almost complete freedom from judder or motion blur.

The VW550ES also startles with its contrast and brightness in a way its also-impressive VW520ES predecessor never did. Standard dynamic range sources look as bright and vibrant as I’ve seen them look on a projector, without handing over megabucks for high-end models from the likes of Sim2 or Sony’s professional projection division. This brightness never feels forced, though – colours still look natural and gorgeously nuanced, and dark scenes and areas still benefit from authentic, rich black levels.

Actually, black levels are a revelation. They look deeper and more natural than they did on the VW520ES, and dark scenes also contain more shadow detail. JVC’s D-ILA projectors still have an edge where black levels are concerned, but with the VW550ES Sony has narrowed the gap considerably.

Shifting to HDR – the projector switches automatically into HDR mode when it detects HDR signals – the VW550ES delivers an even bigger step up from its predecessor. This is partly because the expanded contrast range delivers a more natural look to the darkest end of the HDR light spectrum, but also because the new HDR Contrast adjustment means you no longer have to put up with a significantly darker base luminance level when watching HDR sources.

Yes, upping the HDR Contrast setting to raise the overall HDR brightness level does reduce the punch you get from peak highlights on the best HDR TVs. But there’s still no question that you’re looking at an HDR image and, more importantly, the picture looks more balanced, natural and satisfying than it does using ‘native’ HDR settings.

A sensibly set up VW550ES doesn’t just give a greater sense of brightness and contrast with HDR than the VW520ES did either. It also somehow – perhaps because of its improved black-level performance – delivers a more vivid colour showing, giving you at least a flavour of the wider colour gamuts associated with pretty much all of today’s HDR sources. Certainly you’re aware of a flatter feel to pictures when you switch back to SDR.

While the VW550ES’s HDR performance is a big improvement on anything I’ve tested on a projector so far, though, there are strings attached. First, even in high lamp mode with the HDR contrast setting pushed quite high, there’s still a degree of silhouetting with certain shots. In other words, where relatively dark objects appear against a bright backdrop, the projector can’t render the dark object with enough light detail to stop it looking a bit like a shadowy cut out.

Second, when you have the lamp set to its highest output mode for HDR, the projector’s fans have to run much more loudly than they do in the low lamp mode. The noise is fairly smooth and consistent, but it can still be noticeable during quiet movie moments.

The VW550ES’s performance as a gaming projector is excellent with HD standard dynamic range content. I measured its input lag with such content at a very low 28ms with the Game picture preset and Input Lag Reduction feature activated.

I can’t currently say with certainty, though, how the VW550ES fares in input lag terms with 4K and HDR sources. This is because for some reason I couldn’t get the projector to recognise my usual HDR input lag test signals.

Sony assures me, though, that input lag with 4K HDR sources is only 26ms, despite the Input Lag Reduction feature not being available for 4K content. They say this is because the projector’s chipset is native 4K, and so no upscaling processing is required with 4K sources, removing the need for a specific Input Lag Reduction setting.

While it almost feels a crime not to feed the VW550ES native 4K content as often as you possibly can, the projector actually does a very smart job of upscaling HD sources. The sense of density in the image is greatly increased, and there’s some genuine extra detail too. Even better, this added detail doesn’t include any exaggerated source noise, showing that Sony is unusually adept at recognising the difference between noise and genuine picture information in source signals.

My test sample sporadically exhibited a strange flickering instability over bright parts of standard dynamic range pictures. Experiments revealed that this wasn’t an artefact of the projector’s dynamic iris technology – which actually works superbly – and could only be stopped when it appeared by toggling between lamp output modes.

Given the randomness of the solution, though, and the fact that the flickering didn’t show up all the time, even with the same scenes, I suspect this was just a bug in my test sample.

The VW550ES’s mostly brilliant 2D pictures are joined by outstanding 3D pictures too. The projector’s combination of brightness and contrast helps it deliver 3D with more brightness and dynamism than you usually get with a projector. It delivers richer colours and a greater sense of 3D space than you commonly see.

Even better, the VW550ES’s 3D images look remarkably detailed and crisp for a format that’s only available on HD Blu-rays. This is testament both to the quality of Sony’s upscaling systems and the fact that Sony has done a brilliant job of removing almost all 3D crosstalk ghosting from the picture.

If you happen to have £9,000 burning a hole in your pocket and a spare room you can turn into a dedicated home cinema space, the VW550ES is in a class of its own – at least if you’re keen on experiencing an enjoyable HDR experience from a projector. 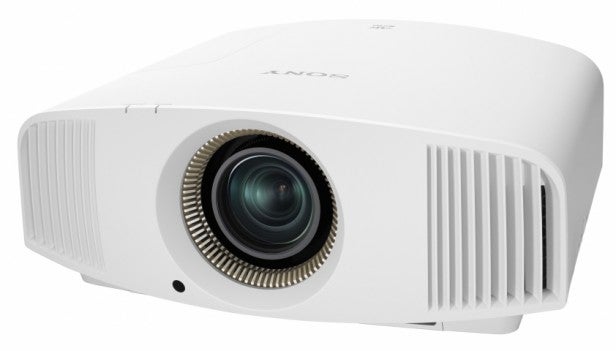 The only alternative you could consider, really, is the £8,500 JVC DLA-X9000. We haven’t tested this projector yet, but based on experience of past JVC 9-series models and a review of the step-down X7000, I’d expect the X9000 to deliver stunning black levels and exquisite standard dynamic range pictures, but to lack the brightness to do HDR with conviction. It may prove me wrong, of course.

Thanks to its spectacular 4K capabilities and, especially, its surprisingly convincing HDR pictures, the VW550ES actually manages to make £9,000 feel like good value. And you can’t say fairer than that.