While other projector brands still can’t get their native 4K act together, the VPL-VW550ES represents Sony’s third generation of 4K projectors.

It benefits considerably from that experience in terms of both the level of picture quality it achieves, and in the way it takes a more pragmatic approach to that trickiest of projector subjects: HDR (high dynamic range) playback.

Add in support – for the first time on a projector – for the upcoming Hybrid Log Gamma HDR system, and the VW550ES just about makes its £9,000 asking price look like a bargain. 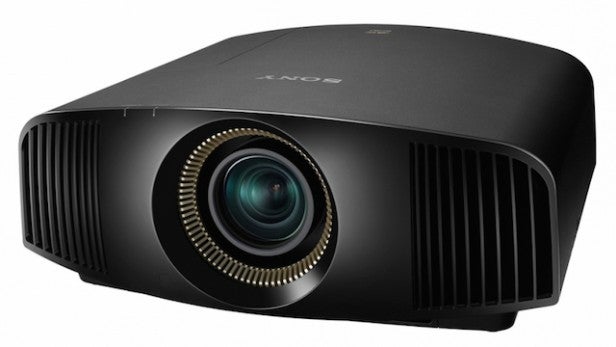 Related: Best 4K TVs round up

The VW550ES looks pretty much identical to its VW520ES predecessor. So, to my eyes, it resembles a squashed Darth Vader helmet with its vaguely elliptical shape and large grilles to either side.

There’s the same unusually robust metallic feel to the finish too, and your eye is still caught by the promisingly large, centrally mounted and recessed lens. Especially as this lens is surrounded by some fetching shiny gold strips angling in towards it.

At 495.6(w) x 195.3(h) x 463.6(d)mm and 14kg, the VW550ES is a hefty beast for a domestic projector, underlining the point already raised by its £9,000 price that it’s not a casual projector. This is a serious home cinema machine best installed permanently in a dedicated home cinema room.

The only significant design difference between the VW550ES and its predecessor is that it’s available in two colour options: white and black.

The VW550ES’s remote control is exceptionally effective. It’s backlit, making it easy to use in a dark room, and its buttons are ergonomically spaced out and well organised.

One of the biggest changes Sony has introduced with the VW550ES is more control over the way HDR pictures look. For starters, there’s now an HDR contrast mode with 100 different settings, so you can find a setting that gives a balance between brightness and contrast that suits your tastes. There’s also a new Contrast Enhancer mode that tries to automatically optimise brightness by continually assessing the incoming picture.

I settled on leaving the Contrast Enhancer on low and HDR contrast on 72, a bit higher than the default 60 value. But don’t feel you need to follow my settings – the main point here is how good it feels to have so much flexibility on hand to support different image tastes. 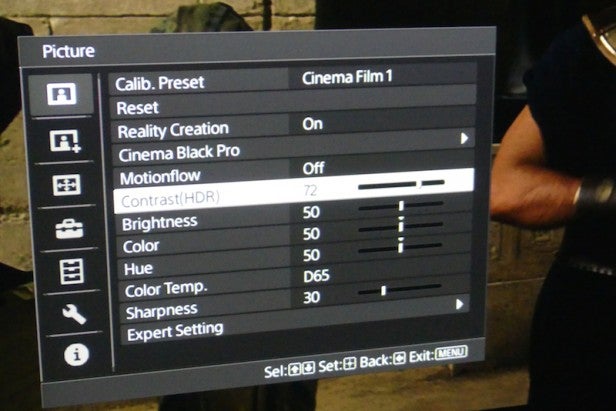 My favourite picture preset for my blacked-out room was Cinema 1, and I also recommend turning off all noise-reduction systems, setting Smooth gradation to Low, setting the lamp to low for non-HDR content, and making sure you always use the Game preset when using the projector as a super-sized gaming display.

If you’re wondering why you get 4,096 x 2,160 pixels rather than the 3,840 x 2,160 pixels you get with UHD TVs, it’s because the SXRD chipset inside the VW550ES is derived from Sony’s professional cinema projectors, which use a ‘true’ 4K pixel count.

Sony has boosted the VW550ES’s (dynamic) contrast ratio by 20% over that of the VW520ES, bringing it up to a very impressive 350,000:1. So there should be a more contrasty look to pictures, even without an actual brightness boost.

The VW550ES’s brightness of 1,800 lumens is the same as that of the VW520ES. This is slightly disappointing given HDR’s need for brightness, but as we’ll see, the new HDR setup aids have definitely improved the VW550ES’s HDR credentials.

I guess the new HDR contrast adjustment could be controversial. After all, when you start mucking about with HDR settings you can end up moving away from the ‘correct’ look that HDR content is designed to have.

The thing is, though, that no current projectors this side of £50,000 are bright enough to deliver a ‘native’ HDR image convincingly. They tend to leave HDR images looking too dark, and dark parts of the picture looking over-dominant and devoid of detail. So to me it seems eminently sensible that Sony has listened to feedback from reviewers and consumers and provided the option of boosting the base level of brightness in HDR images, even if that reduces the image’s overall dynamic range.

While we’re on the subject of HDR upgrades, the VW550ES is also the first projector that supports the new Hybrid Log Gamma (HLG) HDR format developed by the BBC and NHK to deliver HDR broadcasts. I couldn’t test this, as no HLG content is currently available, but Sony is confident there shouldn’t be any compatibility issues when the first HLG broadcasts go live.

The VW550ES also scores points over its predecessor with its HDMI ports, which now support 10-bit 4K at up to 60 frames per second. The HDMIs are joined by LAN and USB ports for service updates, an RS-232 for system integration, an IR input for a hardwired remote control, and two 12V trigger outputs.

Gamers will be pleased to note the reappearance of an Input Lag Reduction system within the projector’s Game mode, although, as mentioned, it seems puzzling that this is only available for HD sources.

Finally, the VW550ES supports 3D playback – and miraculously Sony even went to the trouble of providing me with a pair of 3D glasses so that I could check these 3D abilities out.