The VPL-VW520ES is Sony’s latest 4K projector. This is significant in itself given that no other brand currently offers a 4K projector with a native 4K resolution. But that’s just the start of the VW520ES’s attractions, since it also happens to be the first projector to support high dynamic range (HDR) playback. All for an £8,800 price which actually looks very fair value for such a cutting edge beast.

With Star Wars fever sweeping the globe at the time we’re writing this review, we can’t help but think that the VW520ES’s design looks a bit like Darth Vader’s helmet. Its black bodywork, arched top, curved edges and the venting grills that appear either side of the centrally mounted lens really do have a touch of the Dark Lord about them. Though if this scares you, a white version is also available, which reduces the threat level to Stormtrooper… 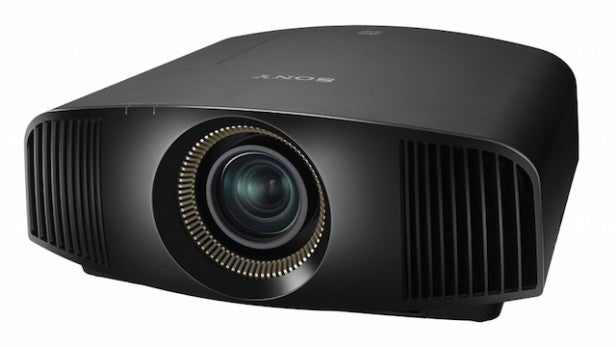 Without suggesting that we’ve got the hots for Vader, we do find the VW520ES’s design quite attractive in a no-nonsense kind of way – especially as Sony has applied a dash of panache in the form of a circle of short gold stripes around the lens.

The lens itself is large and looks high quality, joining the projector’s considerable weight, robust build and substantial size in raising expectations of an uncompromising performance.

Connections tick the boxes we’d expect. The two HDMIs, for instance, are able to play not just 4K but 10-bit 4K with high dynamic range. This is a first for any projector – though it should be stressed that the 10-bit support only holds up with 24fps frame rates, with 4:2:2 colour subsampling. Feed in 4K material at 50/60 frames a second and the support drops to 4:2:0 8-bit.

There are also two 12V trigger outputs so that the projector can drive, say, motorised screens or curtains, as well as an RS232 port to aid system integration; an IR input; and a LAN port for uploading service updates.

While other projection technologies finally seem to be getting close to native 4K support, right now Sony’s SXRD system is the only one offering native 4K projectors. And in this case when we say 4K we actually mean it, for its native pixel count is the 4096×2160 one used in commercial cinemas rather than the ‘UHD’ 3840×2160 one used on ‘4K’ TVs.

This doesn’t mean that your 3840×2160 UHD sources wil appear stretched vertically, though; the VW520ES just won’t use the extra lines with such content, leading to small black bars above and below 16:9-ratio content and a slight widening of the black bars you get above and below 21:9 (and similar) aspect ratios.

The addition of high dynamic range (HDR) support to the already ahead-of-the-game 4K resolution is a big deal. When done right the extra luminance and (based on the now more or less solidified industry specifications) colour range you get with HDR material delivers an impact on picture quality that’s actually even greater than that provided by 4K. Pictures can look more punchy, much richer in contrast, more immersive, more full of depth, yet also more natural and realistic. So long as the tricky process of ‘remapping’ HDR’s extra dynamics to the capabilities of the display device is handled well.

It has to be said that the VW520ES’s provided specifications don’t look on paper as if they’ll be able to unlock the full potential of HDR. The 1800 Lumens claimed brightness is only slightly higher than that of Sony’s previous non-HDR VW500ES 4K projector, and while the 10-bit support is joined by Sony’s wide colour gamut ‘Triluminos’ system, Sony won’t be drawn on exactly how much of the Digital Cinema Initiative colour spectrum (which seems to becoming the initial target for HDR displays) the VW520ES can deliver.

Still, we saw enough during a preview of the VW520ES at the IFA show in September to know that it has the potency to deliver at least some of HDR’s extra impact – and anything that gives you a genuine jump in picture quality has to be welcome.

We did have a few problems during our tests getting the VW520ES to play the few HDR clips available to us. With no UHD Blu-ray players yet available and no external set-top boxes currently offering HDR outputs, the only way we could get HDR into the VW520ES was via a USB attached to Sony’s FMP-X5 4K media player. But since this player can’t pass HDR identifiers to the projector that might help it know to look for HDR image data, we had to set the projector’s HDR mode to On rather than Auto in order to bring the HDR playback into play.

Furthermore we couldn’t get some of our HDR clips to be seen at all by the X5/VW520ES combination – something Sony’s technical people suggested was probably a result of those clips not using standard image formats.

The bottom line with all this, though, is that it’s the sort of thing that happens when a new technology arrives with no formal standards attached to it. With standardisation of HDR due to be formalised at the Consumer Electronics Show in January, future commercially available HDR content should end up playing just fine on the VW520ES.

While the HW520ES’s 4K and HDR support undoubtedly steal the headlines, there are a few other features worth mentioning. Particularly eye-catching is a claimed contrast ratio (using a dynamic iris system) of 300,000:1. This is a huge number that improves by 50% on the figure claimed by 2014’s VW500ES 4K projector, and could have a big part to play in delivering more impact with HDR content. 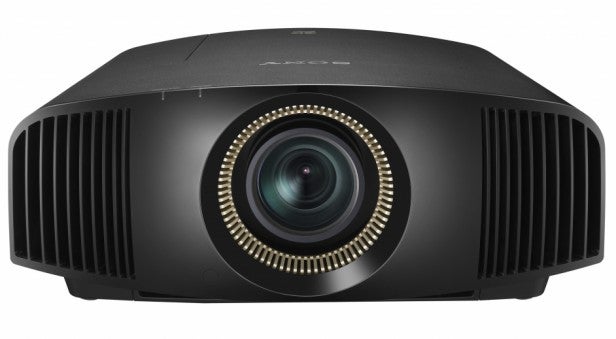 The VW520ES also supports 3D playback (though you don’t get any free 3D glasses), and carries Sony’s always likable Reality Creation processing engine to cope with the conversion of HD material to the projector’s native 4K resolution. This engine also supports Sony’s ‘Mastered in 4K’ Blu-ray disc series (some of which are reviewed here), optimising the projector’s settings when it detects a Mastered in 4K Blu-ray disc. Please note, though, that these Blu-rays actually only play in HD; they’ve just been derived from 4K Masters and retain a little extra picture information that Sony’s compatible displays can ‘unlock’.

One last extremely useful feature to mention is the VW520ES’s lens memory, which lets you set up different lens settings for different aspect ratios. This is much more convenient than having to mess around with external anamorphic lenses.

The VW520ES is pretty dreamy to set up in most ways. Its zoom and focus are motorised, so you can adjust them via the remote control, and they’re joined by plenty of optical image shifting along both the vertical and horizontal axes. Again, this image shifting can be adjusted via the (backlit) remote control.

The VW520ES’s menus, meanwhile, include all the picture calibration tools you’d expect to be there on a projector that costs £8,800. White balance adjustment, colour management, gamma settings, fine tuning of the various contrast, upscaling, motion and colour processing systems… Plus there’s a series of reasonably well considered picture presets for people who just want to switch their VW520ES on and get going with the minimum of fuss.

The VW520ES does require a little set up care to get the best from it. For instance, to achieve the best balance of contrast, light stability and colour finesse we found we needed to turn the Dynamic Control feature off, set the Advanced Iris to between 70 and 74, and turn the contrast enhancer to ‘Low’.

We’d urge caution with the Reality Creation setting too, as it can make pictures look a bit gritty if you push its sharpening element too high. You should also turn off noise reduction for any native 4K content, and we’d suggest you experiment with the projector’s numerous ‘Motionflow’ settings to see which one suits you best. Our personal favourite is True Cinema, but as we said, feel free to experiment.

Finally, contrary to our typical projector advice, we’d recommend that you set the VW520ES’s lamp to Normal rather than low to make the most of the projector’s high brightness, rich colour potential – especially if you’re watching HDR content.