What is Sony Entertainment Network?

Sony
Entertainment Network (SEN) is the official name for the smart TV system employed by Sony
on its latest TVs. It’s undergone some significant changes from its 2013
iteration, including the addition of a fully formed recommendations
system and some interesting – and sometimes impressive – new aids to
finding content.

Last
year’s Sony Smart TVs scored highly for the amount of video
streaming services it covered, and its presentation was colourful and
attractive. However, it was also poorly organised and distinctly lacking
in features compared with the sets of some of its rivals. Certainly its
limitations when it came to organising and browsing apps were pretty
painful, as was the speed with which the platform ran on many Sony
models, with sluggishness especially apparent on the home menu.

It’s
fair to say, then, that there’s plenty of room for improvement with the
2014 Sony Entertainment Network offering. Thankfully it becomes apparent pretty much right
away that improvement is very much the order of the day.

SEE ALSO: Sony TVs In 2014: Everything You Need To Know 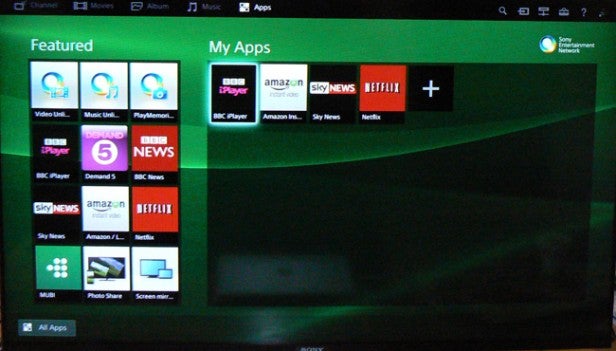 Sony has generally kept an admirable focus on actual video apps and services over the often clutterred and low quality ‘app stores’ sometimes favoured by its rivals. That said, last year it couldn’t match Samsung in this department as it didn’t carry ITV Player and 4oD catch-up services, so it’s slightly disappointing to discover there’s no change in this area. Depending on your viewing habits this may not matter so much, but comprehensive coverage would have given Sony a seriously large ‘tick’ in the content column.

These disappointments aside, the 2014 Sony Smart TVs come equipped with a decent roster of video apps. Both Netflix and Amazon Prime Instant Video (formerly LoveFilm) are present, which we consider a must in this day and age. BBC iPlayer is present, too, as Demand 5 from Channel 5.

We also rather like the fact there are dedicated news apps from BBC News, BBC Sport and Sky News. If you don’t have the time or inclination to watch live bulletins they’re a useful way staying up-to-date from the comfort of your sofa.

Then, of course, are Sony’s own services, Video Unlimited and Music Unlimited. Sony is unique among TV makers in having its own video and music services, so it’s no surprise that they’re given a great deal of attention and we’ll be covering them in more detail later.

The TV used for this assessment is the Sony 50W829.
This is a great TV as we mentioned in our earlier review, and it
carries the full version of the latest 2014 Sony Smart TV system.

The only thing it
doesn’t come with is Sony’s new ‘Flick’ remote. That’s an optional extra
we weren’t supplied with for our review. We’ll update this feature with
info on the Flick remote when we get one with a future, higher-end
model.

The standard remote you do get with the 50W829 is OK. It’s
a pity it doesn’t use a different layout to last year’s, as at times
you can’t help but feel like Sony has just shoehorned its new smart
features onto an essentially non-smart remote, with occasionally awkward
results. Particularly strange is the way the Home and SEN buttons both
take you to the exactly the same main smart hub menu.

There are
some helpful additions, though, most notably a dedicated Netflix button
(interesting to see Sony opting for a Netflix when usually it’s pretty
obsessed with pushing its own Video Unlimited platform), and three more
buttons we’ll talk about more later: Discover, Social View, and
Football.

The new menu you’re taken too when you press the SEN or
Home buttons shows a pretty radical and welcome shift in Sony’s
interface thinking. For now the screen is hugely dominated by content
rather than the settings options that dominated when you hit the Home
button last year.

The exact presentation and content of the
‘Home’ screen that appears when you hit the Home or SEN buttons depends
on what Home screen you were using last time you exited the Home menu.
The default screen, though, is the Channel one.

This shows a
tiled collection of channels the TV thinks you might like based on
analysis of your channel and genre viewing history. Along the top two
rows are programmes showing now, while along the bottom are programmes
picked out from the upcoming listings. 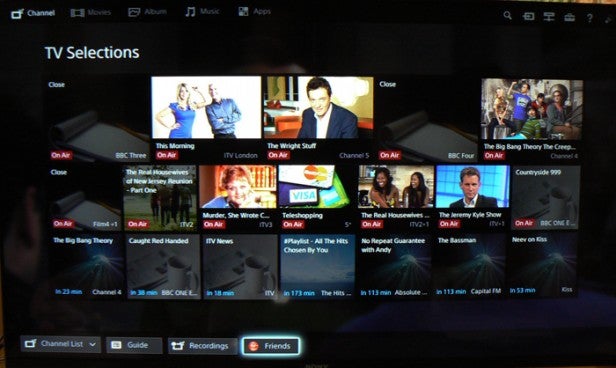 As
you would expect, the programmes on now can be switched straight to
just by selecting their icon, while if you select one of the upcoming
programmes you’re asked if you want to set timer recordings or reminders
for them.

Along the bottom of the screen are small links to
other content options. The most interesting of these is the Channel
List. Selecting this initially shows currently showing programmes in a
horizontally scrolling list running along the bottom of the screen.
However, rather brilliantly, scrolling down from this initial TV listing
line allows you to see lines of other content sources too.

This
succinct and varied list approach to content works fluidly and is
actually a pretty inspired idea that arguably deserves more prominence
in the home menu setup.

Another option along the bottom is a
normal EPG option – though actually even this isn’t completely normal,
as you can use it in conjunction with the internet to have a more
interactive listing system.

The EPG itself is decently presented,
though it might have been better to keep a small picture running in the
top right corner rather than just covering the whole picture with the
EPG menu.

Next to the Guide link on the Channel home screen is a
Recordings option for quick access to any recordings, you might have
made and finally there’s a Social option. Select this and you’re given
the option of connecting your Facebook account to the TV, so that you
can ‘love’ favourite TV shows and ‘discover new content with your
friends’. You can even invite friends to watch the same TV show you’re
on and chat about it while you watch.

Personally, it felt to us as if Twitter would have been a slightly more natural fit
with this sort of social interaction, though we suppose Facebook is a more
‘personal’ social media system – and certainly it has way more users
right now.

One little gripe about the Channel home menu is that
during our tests the programme tiles took a long time to fill with the
correct pictures associated with each show. For much of the time you
just get generic images. This seems a bit odd given that Samsung TVs
have no trouble quickly accessing photos for all the programmes in its
listings pages, so hopefully it’s something Sony will be able to speed
up over time.

Another issue that threw us initially but which
didn’t trouble us for long is the way all the typical TV controls –
input selection, picture setup, sound set up, network set up etc – are
found to the top right of the Home screen, via a series of small menu
header icons. There’s an icon here, too, showing the strength of your
Wi-Fi signal.

It feels a bit long-winded accessing these icons
when you’re first setting the TV up, and we couldn’t help but think that
perhaps the Home button could have been used to access these features
in a more direct way given that the Home button currently does exactly
the same thing as the SEN one. But then we guess keeping the setup stuff
tucked away is all part of Sony’s desire to put content first and
‘background stuff’ a distant second. And for the majority of the time
it’s actually hard to fault Sony for such thinking.

Used as the main TV for the review period
Tested for more than a week
Tested using industry calibrated tools, discs and with real world use
Tested with broadcast content (HD/SD), video streams and demo discs
Next
Homescreen cont. Review