With the AF9, Sony has created something epic.

What is the Sony AF9 OLED?

The hero of Sony’s new Master Series TV line, this high-end OLED occupies Sony’s televisual Iron Throne. The Sony AF9 has been hailed by the brand as the king of screens, and in many respects it lives up to the hyperbole.

It bristles with leading edge picture processing technology, features an upgrade on Sony’s panel-wobbling Acoustic Surface audio technology, and introduces the latest version of the Android smart OS. It is, in short, an extraordinary bit of kit. 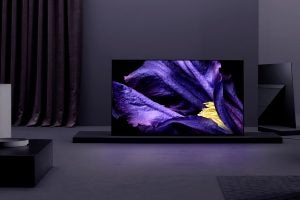 Much like its predecessor the Sony A1, the Sony AF9 adopts a languid pose. The panel leans back, supported by a kickback stand that incorporates electronics, audio wotnots and connectivity. The stand itself has been substantially re-engineered compared to its predecessor, and now houses three audio actuators and two side-mounted woofers.

Flip the latch, add the counterweight (not required when wall-mounting) and you’re good to go. The lean isn’t quite as pronounced as the original A1, but it still demands low AV furniture and could prove divisive for some buyers.

Unusually, there’s also a dedicated centre speaker terminal, which allows the set to act as a centre speaker in a bigger multi-channel sound system. It’s indicative of Sony’s confidence in its Acoustic Surface technology, which essentially vibrates the screen to make sound.

Perhaps disappointingly, the TV still comes with a standard soft-button Sony remote control. It has dedicated Netflix and Google Play buttons, and does everything it needs to, but we can’t help feeling that a screen this royal deserves something a little more… fancy. 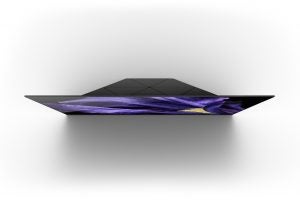 The Android TV OS, long favoured by Sony, has been difficult beast to love. However, the AF9 features an updated iteration, affectionately known as Android Oreo, and it’s a huge improvement. The interface has been decluttered and rationalised. This is a smart platform you might actually want to use.

Streaming services include Netflix and Amazon Prime Video, plus YouTube and a bunch of other diversions. Netflix supports 4K and Dolby Vision, while Amazon offers 4K and HDR10. YouTube can stream in 2160p.

Tuner provision covers Freeview HD and satellite. To get over the lack of Freeview Play, there’s a YouView app which offers much the same functionality – namely a roll-back programme guide and catch-up TV from all the majors (BBC iPlayer, ITVHub, ALL4, Demand 5). Usability, then, is good. 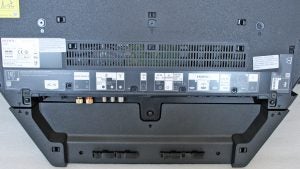 Let’s cut to the chase. The AF9 is a triumphant performer. Image quality on this set is nothing short of sensational. All the usual OLED traits are here in abundance, namely perfect blacks and vibrant colours, but qualified by a superb near black performance that pulls even greater detail and depth from 4K HDR images.

HDR support covers HDR10, HLG and Dolby Vision, and it doesn’t struggle. We measured peak brightness at just over 900 cd/m2 (aka nits) with a five per cent HDR window, typical of the kind of real world highlights HDR can offer.

The set looks first rate with regular HD too, offering high contrast with smooth, compelling detail. Sony has been knocking SDR performance on 4K panels out of the park since the introduction of the X1 Extreme processor, and it carries on the good work here, courtesy of its new XI Ultimate chip. 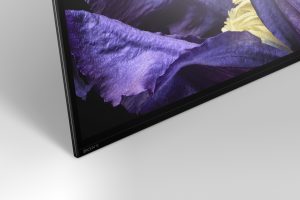 To see this panel really strut its stuff with HD, we’d advise you watch with Peak Luminance set High. The Vivid preset is a heady mixture of oversaturated primaries, blistering detail and huge dynamics. Don’t let the people tell you that you should be suffering HD with peaks flattened and colours muted; with the right content, Vivid can look amazing. 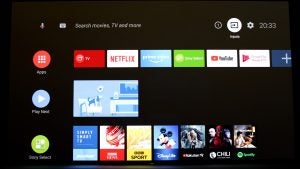 There are some caveats. Luke Cage (on Netflix) is a beautifully photographed show, albeit one that’s dark and shadowy enough to give Dolby Vision issues. Even in a totally dark environment, the Dolby Vision Dark mode is too aggressive, crushing out low level shadow detail. The Dolby Vision Bright option provides a better balance.

One of the set’s more curious viewing options is the Netflix Calibrated mode. I found this a questionable benefit. Essentially it’s a broad brush Cinema preset, which defeats Dolby Vision when used on Netflix DV content. It really doesn’t look that great.

And just to be clear, the AF9’s Dolby Vision support covers external inputs too, not just internal Netflix. Good news if you have a growing Dolby Vision Blu-ray collection.

When it comes to audio, the AF9 is a class apart. The Acoustic Surface+ implementation is excellent. The addition of a central actuator locks dialogue centre screen, leaving the L/R exciters to create a wide soundstage. Those side-mounted woofers add welcome weight. 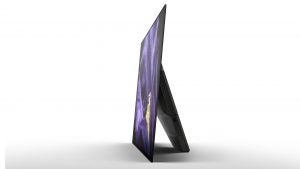 Why buy the Sony AF9 OLED?

If you’re looking for a nigh on flawless OLED 4K performer, the Sony AF9 is it. It looks fabulous with 4K HDR and does a great job with SDR HD too. The arrival of Android Oreo removes a recurring niggle about Sony’s choice of smart platform.

That said, this year has seen a rash of top notch OLED screens. The AF9’s most obvious competitor is the (slightly cheaper) Panasonic FZ950/FZ952. They are both flagships, adopting much the same visual ethos. The Panasonic, with its Technics tuned Dynamic Blade speaker is also the only other panel that can match the AF9’s audio performance. HDR peak brightness is virtually identical, and with 4K content both models offer exemplary images, with only minor debatable differences. I think the FZ952 has the edge in colour fidelity, thanks to Panasonic’s Dynamic LUT (Look Up Table) technology, but the Sony has a brighter, more appealing approach to HD.

For many, a buying decision will probably boil down to design considerations  – that lean isn’t for everyone – and specification. Sony supports Dolby Vision, the Panasonic throws its dynamic metadata lot in with HDR10+.

Cheaper still are the Sony AF8 and the LG C8. Here, LG’s Alpha 9 processor and Sony’s X1 Extreme are outclassed by the AF9’s X1 Ultimate processor when it comes to image nuance and subjective depth. For example, skin tones in HDR on the AF9 just seem more convincing. Its HDR performance is also more dynamic.

With the AF9, Sony has created something epic. It may not be the best value OLED 55-inch out there, but it’s masterful indeed.