The A7S III is a good camera for photographers but an excellent one for video makers. Compact, well-built and thoughtfully designed, it possesses a raft of pro-friendly video capabilities and features that make capturing fantastic footage easier than ever. For demanding videographers, it’s quite possibly the best consumer camera on the market.

The third iteration in the A7S series, it can capture footage in resolutions up to 4K UHD and frame rates of up to 240fps, and supports a wide range of picture profiles and log modes.

While video is its main focus, the Sony A7S III can also shoot stills quite capably. It has a brisk continuous shooting speed of up to 10fps, and its 12.1MP full-frame sensor is capable in low light owing to its large pixels.

The camera uses Sony’s E-mount lens system, giving it access to a large (and growing) range of first- and third-party lenses, including some of very high quality. For the purposes of this review, we mostly used Sony’s FE 12-24mm F4 G wide-angle zoom lens (priced at around £1700), along with several older A-mount lenses attached using Sony’s LA-EA4 adapter.

With a magnesium alloy frame and full weather-sealing, the A7S III is built to last. It’s tough and sturdy, yes, but not particularly heavy. The lens you’re using obviously makes a big difference here, but without one it’s just 699g including its battery and a memory card – lightweight enough to carry around for hours without bother.

Speaking of batteries, the A7S III uses a new one that’ll keep going for ages – enough to capture about 90 minutes of video or 600 stills on a single charge.

And speaking of memory cards, there’s space for two this time, and each slot can accommodate two types of card: SD and CFexpress Type A. The latter is a brand new type of card, smaller than SD but hardier and with extremely fast read and write speeds); the A7S III is the first consumer camera to support it. CFexpress Type A cards come in 80GB and 160GB capacities and start at over £200 each, so they’re pitched squarely at professionals. For those who’d rather output raw video to an external device, there’s a full-size HDMI port. 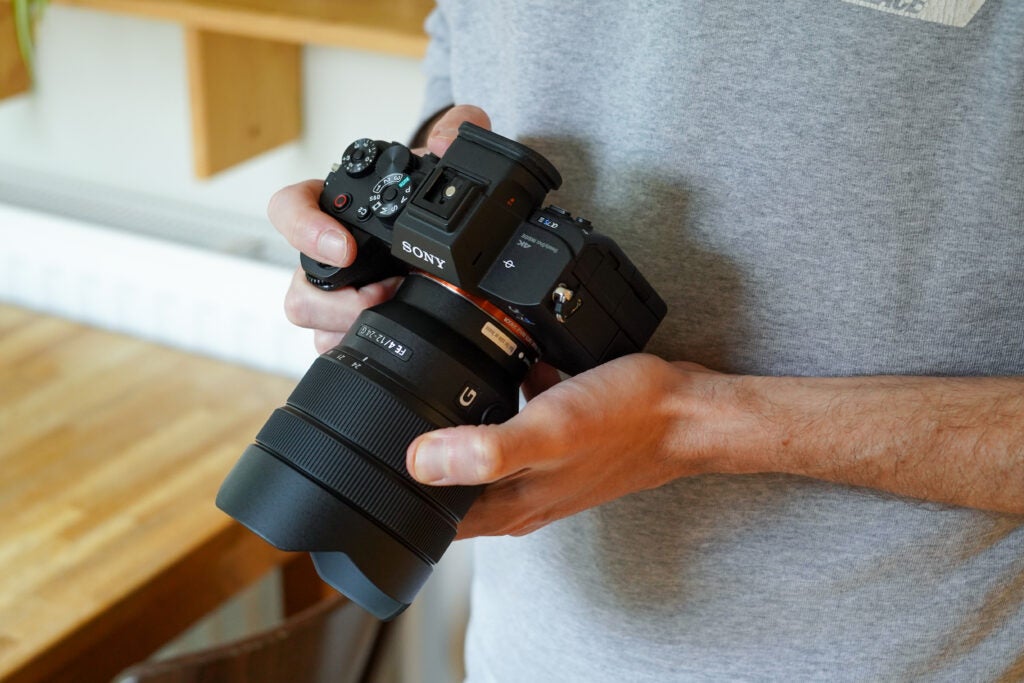 The camera’s ergonomics are fairly standard, with a pleasingly chunky grip for your right fist to wrap around and a large central bulge up top to accommodate the generously proportioned electronic viewfinder (more on that below) and hot shoe.

Buttons and other controls are thoughtfully placed too, with two adjustment dials easily accessible to the right thumb and forefinger without having to move your hand off the grip. The Fn button at the back, also thumb-accessible, brings up a bunch of variables on-screen for quick adjustment, and it’s likely you’ll find little need to dive into the setup menus that often.

Not that the menus are a chore to navigate this time. This aspect of Sony’s A-series cameras has come in for a lot of criticism in recent years, but here it’s been totally overhauled. The menu is simpler and more intuitive, with all the main categories columned on the left, with each one’s contents appearing on the right. Even veteran Sony users who’ve grown familiar with the old menu’s “quirks” will find this fresh setup much more straightforward; finding a particular criterion or variable to change seems to take far fewer button presses.

Previous A7S cameras used a tilting screen that could not face fully forward, but this time Sony has wisely switched to a side-flipping LCD that can rotate almost 180 degrees. That means vloggers and other self-shooters can better frame themselves in shots, and for them it’s a particularly valuable addition – but nobody is going to be disappointed by the extra flexibility it brings.

The screen is detailed and bright (you can manually adjust the brightness, or switch it to a super-bright preset on sunnier days) and comes with pleasingly responsive touch controls. These allow you to change settings and, depending on the autofocus mode you’re currently using, set a focus point simply by tapping your chosen spot on the display’s preview. 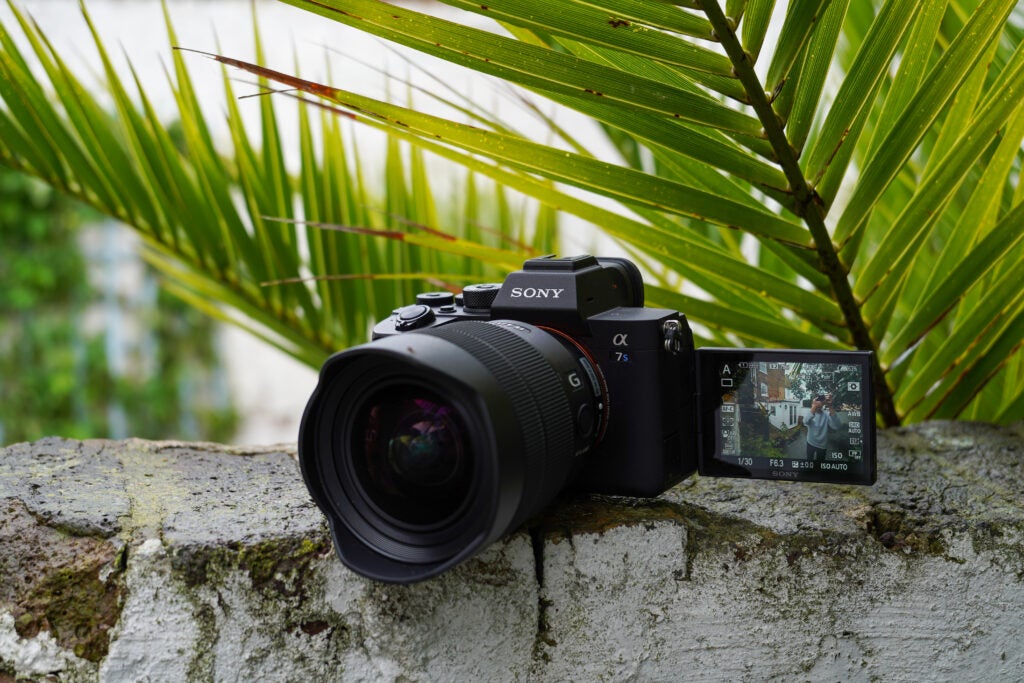 Your alternative when composing shots (or even reviewing them) is the electronic viewfinder, which is superb: bright, large and bursting with detail. There’s no discernible lag when using it, and on sunnier days it’s the perfect way to avoid the glare and reflections that might affect screen visibility.

There is also seven picture profile presets for easy log shooting, a built-in mode on the dial for S&Q (slow and quick) recording and two recording formats: XAVC HS (which uses the newer H.265 compression codec) and XAVC S (which uses older H.264 compression but looks slightly better, according to Sony). XAVC S-I requires a fast memory card due to its high bitrates (600Mbps for 4K 60fps), but in return you get glorious 10bit footage that’s exceptionally clean, crisp and dynamic.

Profiles like S-Log2, S-Log3, HLG and Cinematic are likely to prove popular with filmmakers looking to colour grade and tinker with their footage extensively, but even the camera’s Standard profile delivers strong dynamic range and great colours straight out of the camera.

Video not only looks wonderful, but it’s easy to shoot. That’s largely down to the camera’s excellent hybrid autofocus setup, which includes fast and accurate face and eye tracking that’ll follow a subject around the frame (depending on the lens you’ve got attached, of course). The autofocus works well in low light conditions too.

The A7S III has built-in 5-axis in-body image stabilisation, and it works well for handheld shooting of both video and stills. If you’re walking and shooting video at the same time, the stabilisation doesn’t fare quite so well, but here the camera has another trick up its sleeve: an internal gyroscope that stores motion data with the video. You can then process this video using Sony’s free Catalyst Browse desktop software, which is able to read the gyro data and stabilise the video accordingly. It will require some cropping and that you record in certain formats, but the result is a beautifully stable video that almost looks as if it’s been shot with a gimbal.

Finally, a word about audio. For our test we used only the built-in mics, which capture sound fine in a pinch but no aspiring filmmaker would choose to use. You can, of course, attach all manner of first- and third-party external microphones to the Sony A7S III, including Sony’s all-digital ECM-B1M shotgun mic.

For stills shooters, 12.1MP may not sound like much. The A7R IV, a more photography-centric model in Sony’s full-frame line-up, boasts a 61MP sensor that can resolve a lot more detail in ideal conditions. Where the Sony A7S III excels is sensitivity, with its large sensor pixels capable of sucking in a lot more light than most cameras – a trait that makes it perform really well in low light situations.

It also shoots continuously at up to 10fps which, along with the strong autofocus performance, makes this a good camera for photographing fast-moving subjects. 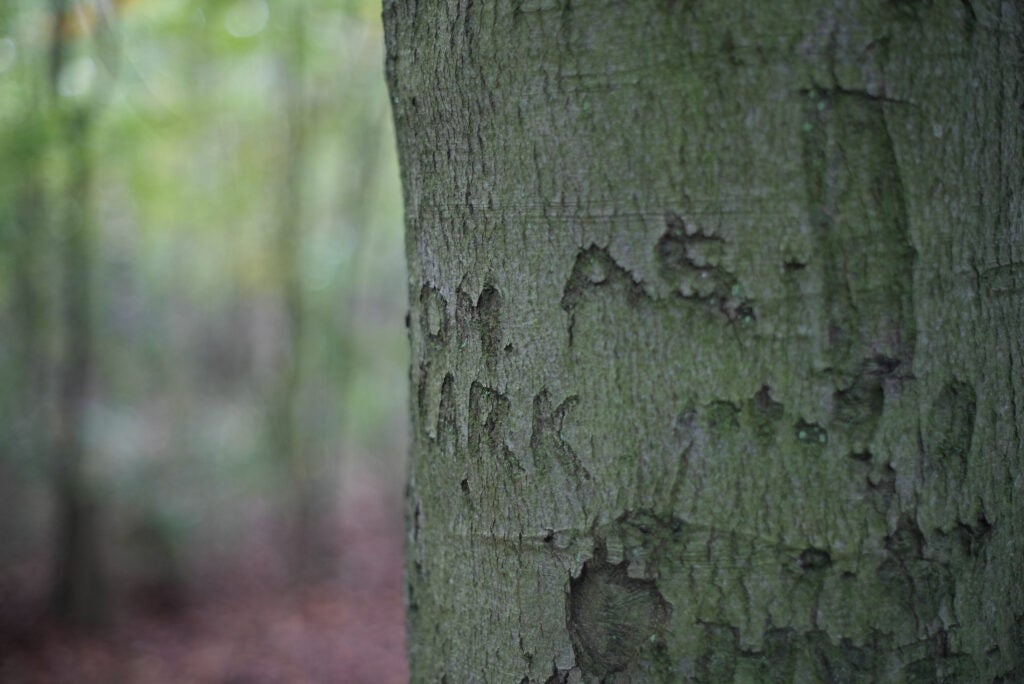 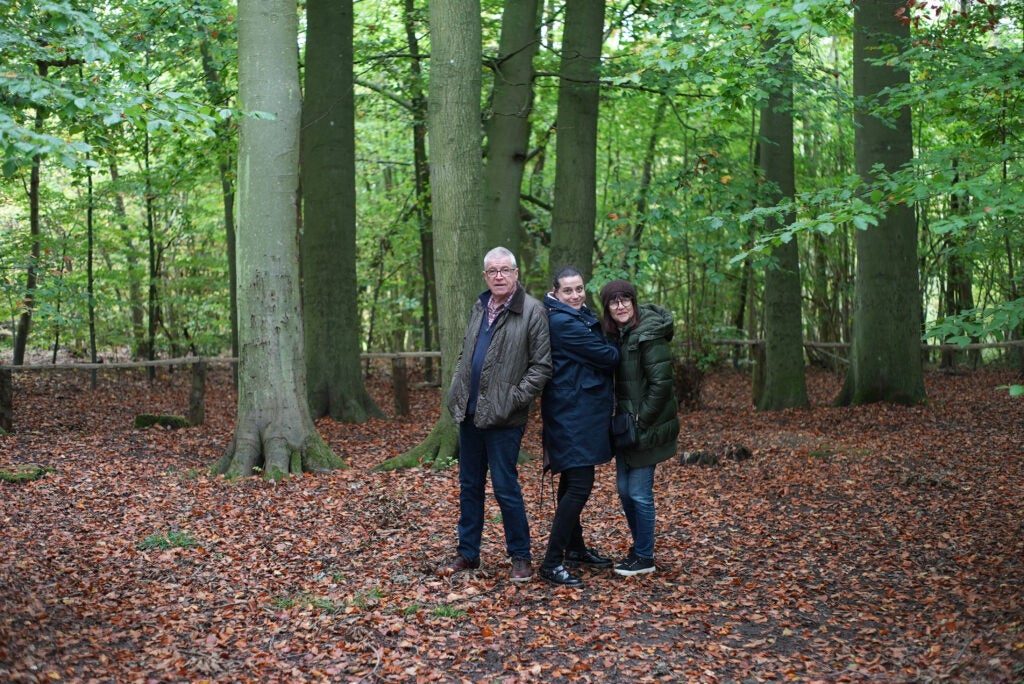 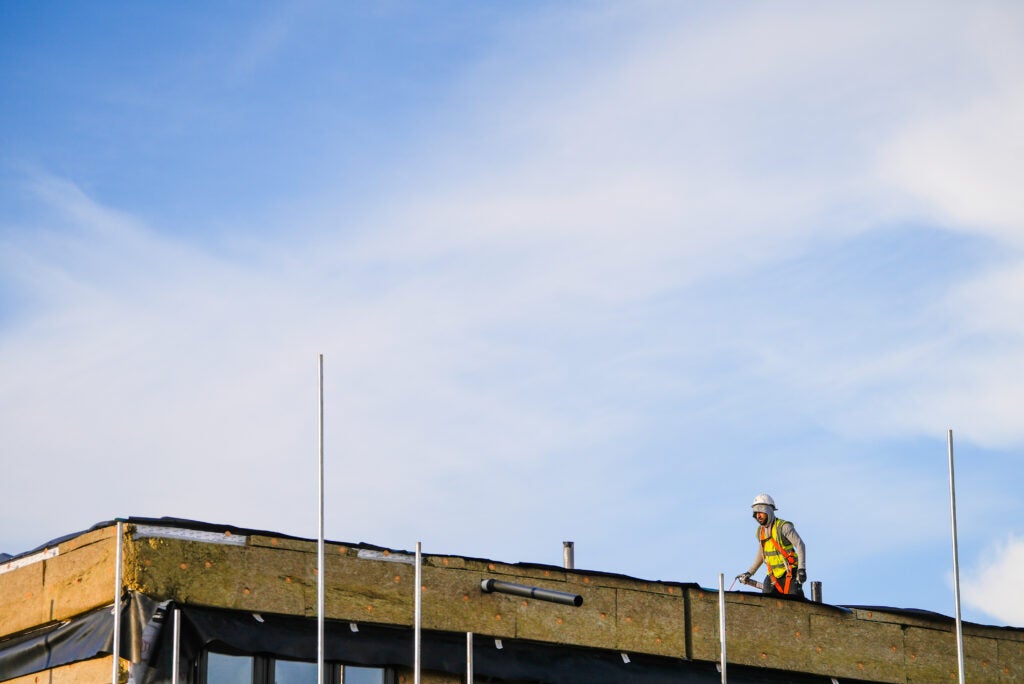 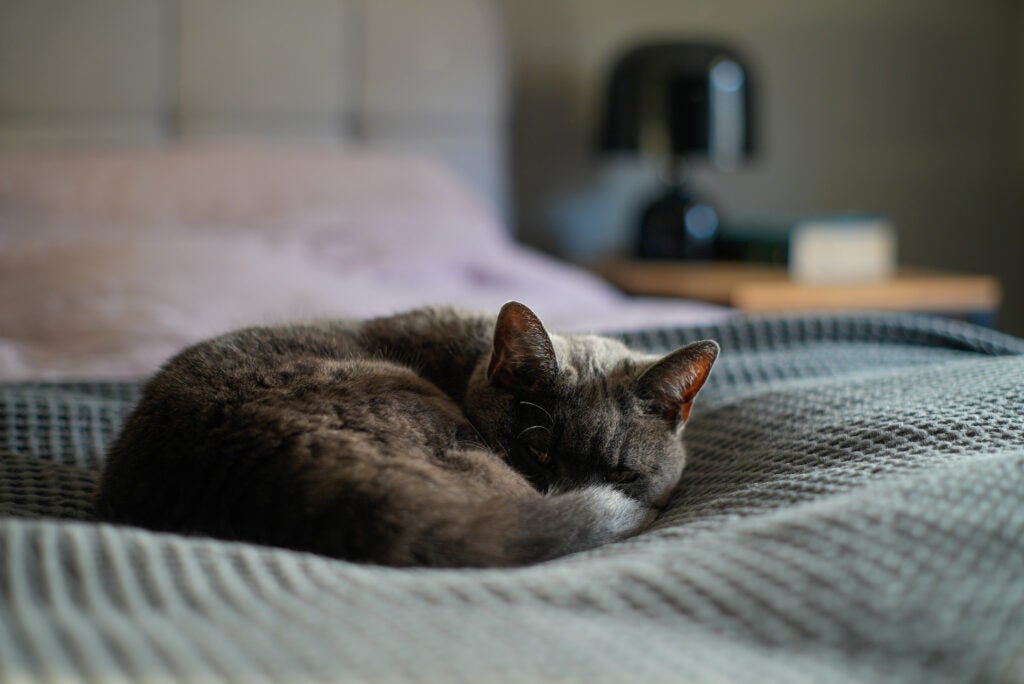 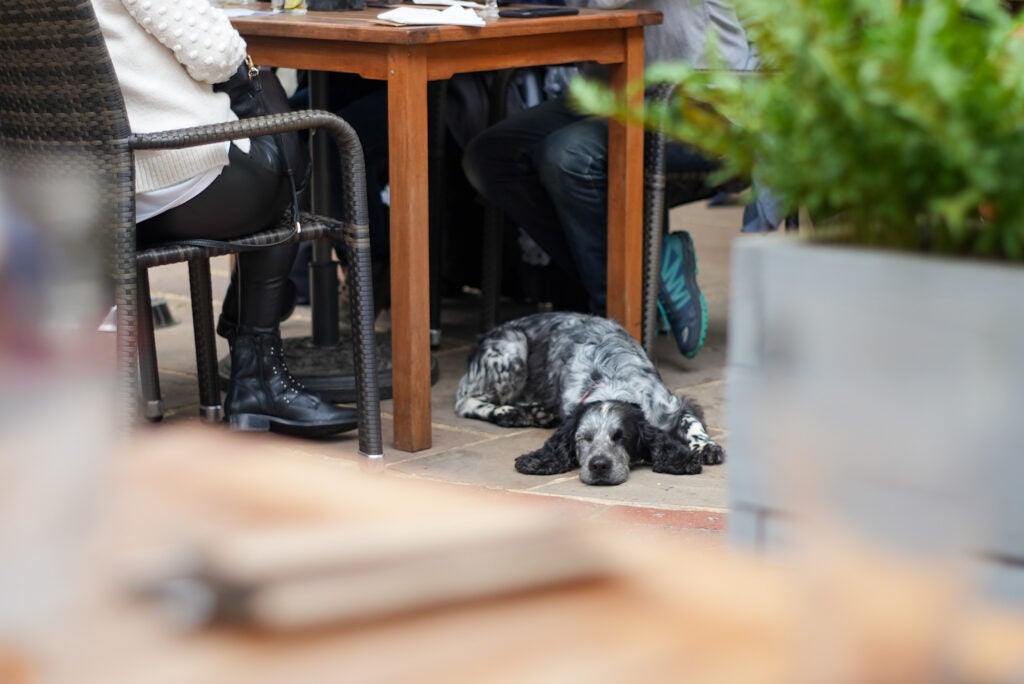 Should you buy the Sony A7S III?

If you’re already invested in the Sony E-mount lens system and make videos for work or pleasure, buying this is a no-brainer (provided you have £3800 to spare). The A7S III is the more versatile mirrorless camera for video and makes capturing stunning footage easier than ever.

For videographers who’ve already sunk thousands into Canon, Nikon or another brand’s lenses, or who value stills as highly as they do video, the SonyA7S III feels less essential. It’s not a bad stills camera by any means, but for the price you could buy something that delivers more detail and punch than its 12.1MP sensor can muster.