What is the Smarter Coffee Machine?

The Smarter Coffee Machine is an eye-opening coffee machine. It’s a bean-to-cup machine that costs around half the price of most entry-level models of this kind.

At £159-179, it has real bargain potential, and is also far smarter than some £1,000 coffee machines, because you can control it with your phone and even schedule a brew using its app.

The idea is great, but this machine is more for tech-head than coffee fans as the taste of its brew just isn’t close to a proper espresso machine or rival bean-to-cup device. 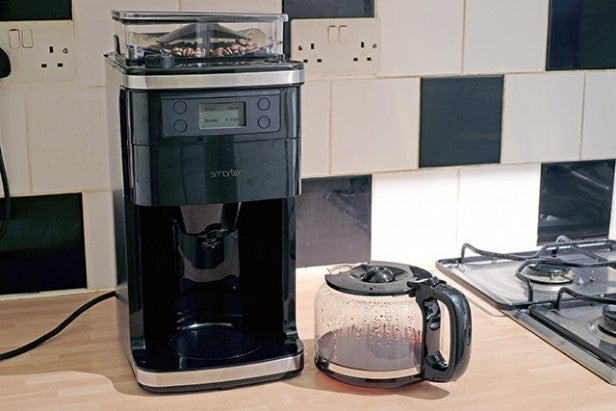 The Smarter Coffee Machine is totally different to most of the coffee machines we review. Its not a pod machine like many at this sort of price, and it’s nothing like other bean-to-cup makers.

Your average bean-to-cup coffee machine is basically a bean grinder welded onto an espresso maker, a bit like an easier, automated version of the sort of machines you’d see in Starbucks. The Smarter Coffee Machine is closer to the sort of basic filter coffee machine you might see offering free refills in your local greasy spoon.

To be fair, plenty of those will have half-decent espresso makers these days too. 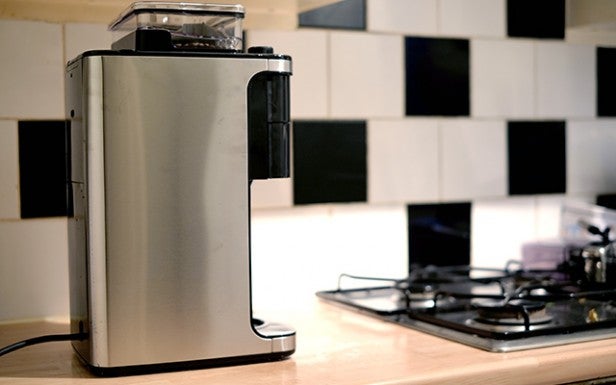 What’s the difference? Espresso machines use a pump to provide pressure to push water through coffee grounds at the right pace while the Smarter Coffee Machine dumps its grounds into a ‘filter’ cone, through which near-boiling water passes, relying solely on good old gravity to regulate the flow.

These kinds of coffee machine are generally under £100, and often well under £50, because they’re a lot simpler than a proper espresso machine. The Smarter Coffee Machine may not be quite as good a deal as it first appears. 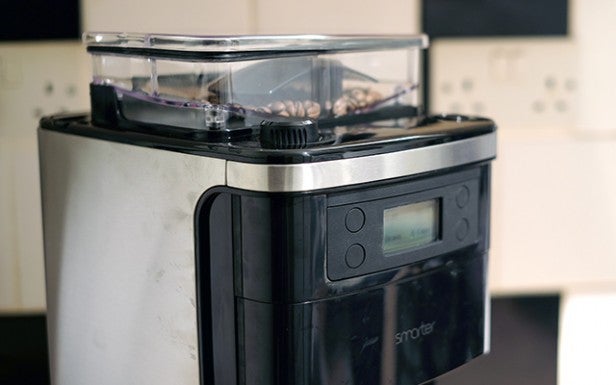 Build quality is decent enough, if largely because cheaper coffee machines rarely excel in this area. It’s mostly-plastic, but the silvery parts on the front and sides are topped with actual metal. The front face parts are plastic, but red and white clip-on plates let you change their colour to match your décor.

The shape is fairly practical too, as long as you don’t have overhanging cupboards. It’s as tall as some of the priciest consumer bean-to-cup machines, but its footprint is fairly small.

The Smarter Coffee Machine has some very neat features too. First, there’s that grinder up top. You pour beans in the reservoir, letting you use nice ’n’ fancy coffee blends designed for real coffee fanatics. Alternatively, you can just put grounds in the filter yourself and bypass the grinder altogether. It’s up to you. 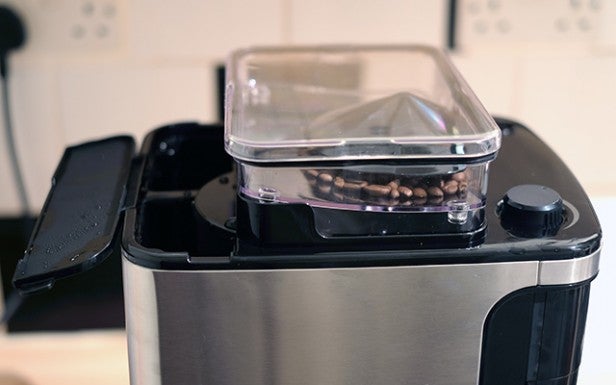 What has earned the Smarter Coffee Machine so much attention, though, is its Android and iOS compatibility. There’s a Smarter app that lets you set a coffee schedule, perhaps firing-up first thing in the morning and when you get home from work. You can setup four of these ‘rules’ throughout the week.

Don’t want to be that organised? You can also just remotely start the Smarter Coffee Machine brewing through the app whenever you’re in range of your Wi-Fi network.

What is the Smarter Coffee Machine like to use?

For the most part the Smarter Coffee Machine is pretty easy to use because it doesn’t offer much in the way of drink customisation. Most of you will only need to change the coffee strength, and it has its own dedicated spot on the front panel’s default display.

Weak, normal or strong: take your pick. There’s also a grinder setting dial on the Smarter Coffee Machine’s top, which lets you pick how fine your coffee grounds end up, determining how long it takes the water to pass through them. It has a real effect on flavour. However, you’d be silly to use anything but the finer end of the spectrum as the very coarse grounds the Smarter can produce are totally unsuitable for the kind of brew involved.

It’s smart, but not every part is tailored for the rest. 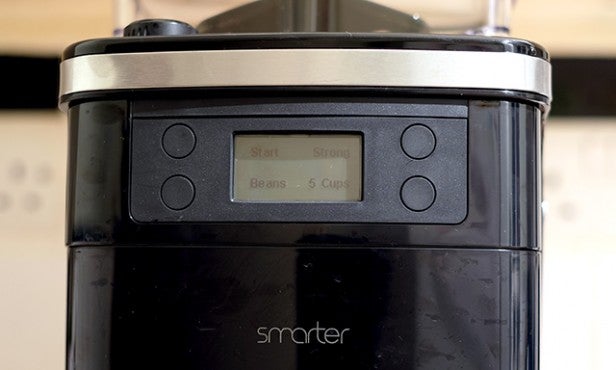 Once you’ve worked out how strong your like your coffee (I settled on ‘strong’ very quickly), all you need to do is to choose the number of cups to make. The Smarter Coffee Machine can make an awful lot of coffee at once. Instead of a cup, it has a big glass carafe that can hold ’12’ cups. If you’re drinking out of a mug you’ll need multiple per drink, but you can make a good few people’s mugs per brew.

One neat Smarter Coffee Machine element is that there’s also a heating plate under the carafe to keep your coffee reasonably warm for a while after it has been brewed. 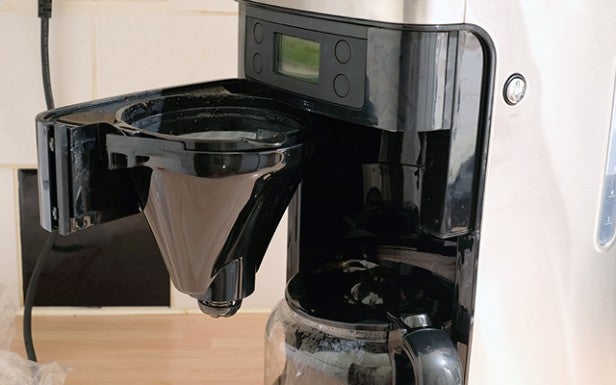 Earlier I may have compared this to the coffee maker of a low-rent greasy spoon, but because of its style it really can function as a way to setup your morning. Bean-to-cup espresso machines aren’t really up to the task because they really on you ‘planting’ a cup underneath their spout in preparation. And most simply don’t have this sort of timer feature anyway.

I was surprised by how easy and non-fraught the wireless functions were. While some user reviews suggest it’s flaky, I found it fine: no major bugs, no loss of connection. It’s a pleasant, simple-looking UI too. It’ll work with Android and iOS. 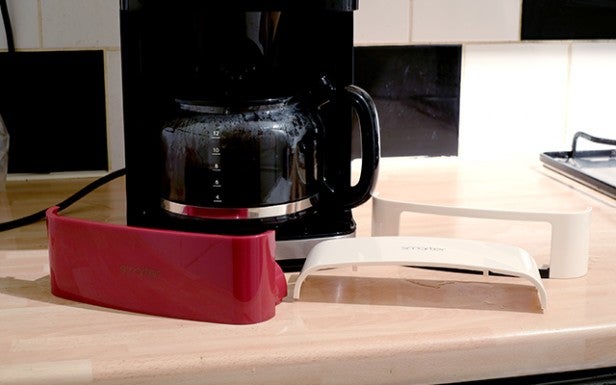 You get red and white faceplates to customise the look: a neat extra

The Smarter Coffee Machine didn’t end up being fuss-free, though. I
found it frequently decided the carafe wasn’t in position, even when it
was.

Looking a bit further into things, this may be because my intense use of the Smarter Coffee Machine caused excess moisture (from the carafe’s steam) causing grounds to stick by the outlet where the grounds leave the grinder, confusing. Still, while I was using the machine more intensively than normal, it’s not as though I was putting it through a dozen brew cycles an hour.

It’s disappointing, and shows that, like the grinder’s coarseness spectrum, not every part of the Smarter Coffee Machine has been fully optimised. You need to be more mindful than you might expect about keeping the machine’s non-visible workings clean.

To be clear, the Smarter Coffee Machine doesn’t do anything with milk either. It can’t make a latte or crank out a cappuccino. If you want to add milk, you’ll have to add cold stuff from the fridge. 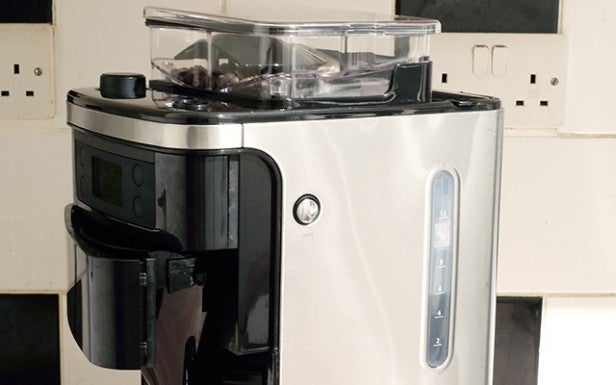 This is the release button for the filter compartment

The Smarter Coffee Machine is interesting and unusual, but ultimately I find it a dead end because compared with almost every other more conventional machine at the price, coffee quality is poor. The first few brews were very thin, hollow and lacking in flavour.

Even maxed-out, ordering more coffee than was needed (in order to release more grounds) and setting the strength to ‘strong’, the Smarter Coffee Machine can’t even approach the sort of flavour you get from the best espresso machines at the price. Turn a double espresso into an Americano with some boiled water and you can even get a decent brew out of something as cheap as the Aldi Albiano, at a third of the price.

Pretty much the only way to get a satisfying drink out the Smarter Coffee Machine, by my own standards at least, is to bypass the grinder, use your own grounds and essentially use this as a fairly ‘dumb’ drip filter device. By taking the Smarter’s dosing system out of the equation I was able to get a pretty good cup of coffee out of the thing. But even then I wouldn’t advise spending this sort of money on that sort of product. Even the (just over) half-the-price KitchenAid Personal Coffee Maker only got by as I found it fit so well into my daily routine.

Having used the Smarter Coffee Machine at a wide variety of settings now, I find its coffee quality to be rather similar to the weak personality-devoid stuff you might get served as part of a breakfast buffet in a hotel. It’s the sort of coffee I’d suggest buying an espresso machine to get away from. 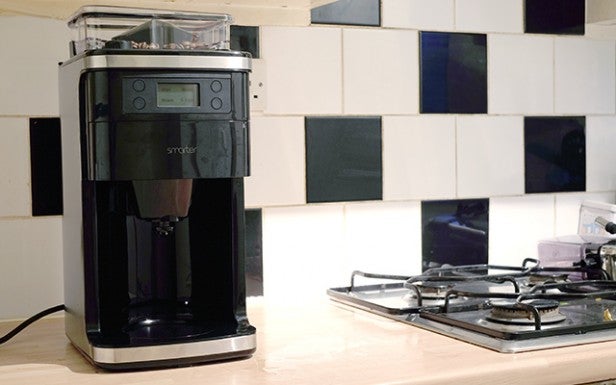 Should I buy the Smarter Coffee Machine?

The Smarter Coffee Machine is way ahead of a lot of the coffee machine competition when it comes to smart integration. I’ve never used a maker this price with phone control, and to see it work reasonably well was nice.

It doesn’t fit into any existing smart home systems, but is sure to have turned a few heads in the industry already.

It sounds harsh, but the idea of spending £150-plus on a not-that-impressive drip filter machine turns this gadget coffee machine from what initially seems like a cracking deal into nothing of the sort.

Forward-looking smart features are made pointless by poor quality results.