What is the KitchenAid Personal Coffee Maker?

The KitchenAid Personal Coffee Maker is a kitchen gadget with a very specific purpose. It’s there to make coffee for just one person.

Whether that’s a singleton or a lone coffee fan in a household of a half-dozen people, in true Highlander fashion there can be only one. There’s no reason why multiple people can’t use it at different times, but it’s specifically designed to be used with the insulated coffee mug that comes included as part of the package.

The core idea makes a lot of sense: a coffee machine that primes a drink ready for a gruelling morning commute. And few coffee makers have quite such directed aims as the KitchenAid Personal Coffee Maker. At £90 it could pay for itself in saved trips to Starbucks within six weeks. There are just a few little gaps in this machine’s attention to detail. 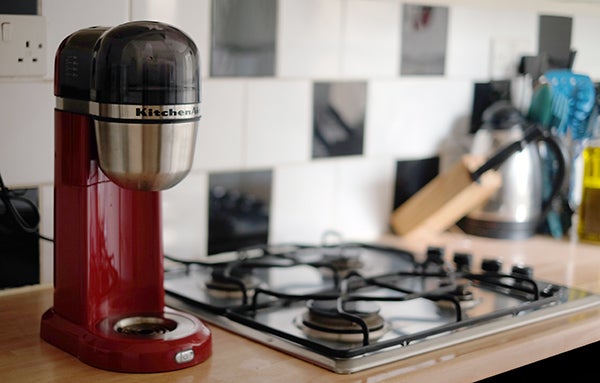 KitchenAid has a way with design. Its stand mixers, blenders and even its toasters have a way of merging industrial-style muscle with bright colour and smooth curves in a manner likely to appeal universally.

The KitchenAid Personal Coffee Maker is no different. It’s big, tall and imposing, almost like a workshop pillar drill without, well, the drill bit. However, its assured curves and (optional) bright red style make it look at home in the kitchen. 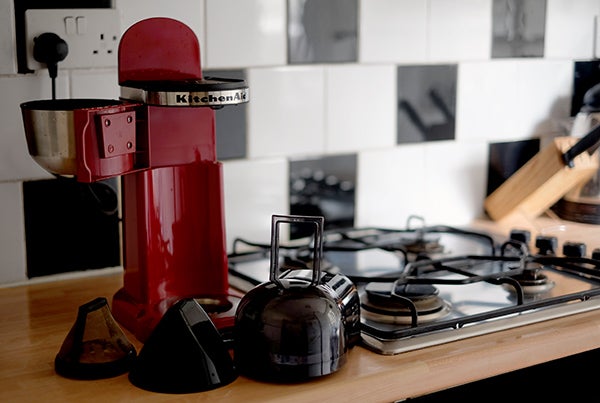 Instead of being wide or deep, the KitchenAid Personal Coffee Maker is tall. The cup holder and reservoir sit atop one another, and as the cup itself is the traditional coffee flash shape and holds 500ml, it needs some vertical space. However, it’s certainly an effective way to blow the cobwebs away on cold, dark mornings. The drink gets you halfway between a Grande and a Venti in Starbucks speak.

While the reservoir isn’t designed to hold all that much more than the mug’s full capacity, you can get just under two servings before a refill if you don’t fill the container to the brim. However, the KitchenAid Personal Coffee Maker really feels like it’s designed to be used, and refilled, once a day. 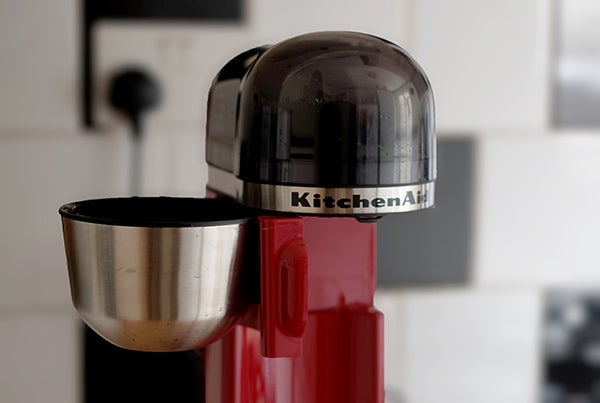 KitchenAid Personal Coffee Maker – What’s it like to use?

A big part of the Personal Coffee Maker’s charm is ease of operation. You fill the reservoir, which has a handle, put some grounds in the re-usable filter and then simply press the single button on the bottom of the tower to get the machine brewing.

It’ll then automatically fill whatever’s below the spout until either you press the button again, or it runs out of water. Now we see why it has a one-use reservoir: it’s a machine designed to brew while you’re rushing about doing those little tasks that never fail to raise your stress level bit by bit each morning.

Should you fill the reservoir completely and forget the KitchenAid Personal Coffee Maker is going, there’s a small drip tray underneath the flask’s throne, but you could overflow it if you tried hard enough, by overfilling the reservoir.

Given the machine’s easy style, it seems a slight shame there’s no warming function on the bottom part to help keep cups other than the default flask warm – in even low-cost espresso machines you’ll often find a cup warmer powered by the set’s heater. Of course, here none of the brains are in the base. 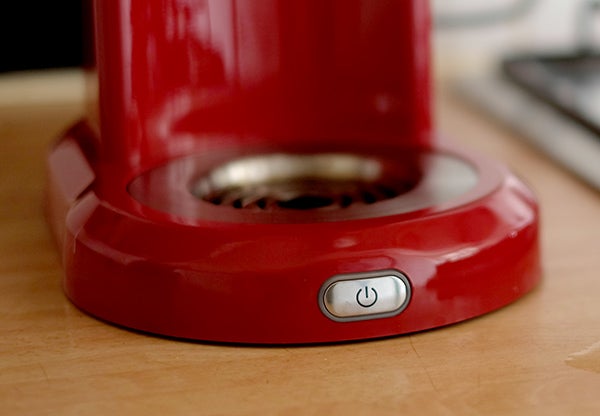 There’s also no getting around that there’s some clean-up involved. The Personal Coffee Maker tries to make it as simple as possible, though. The hinge that opens up to reveal the machine’s innards is kept in place with magnets rather than fiddly clasps and there’s a two-part filter system. The inner part is the mesh that, as usual, takes some rinsing, while the outer is a hard plastic part that catches any small grounds that work their way through the tight mesh.

While you’ll ideally want to clean up the filter on the same day as you make a coffee, we didn’t notice any discolouration of the filter from leaving the used grounds in there for a good number of hours, several days in a row. It’s good for those who don’t have many spare minutes each morning. 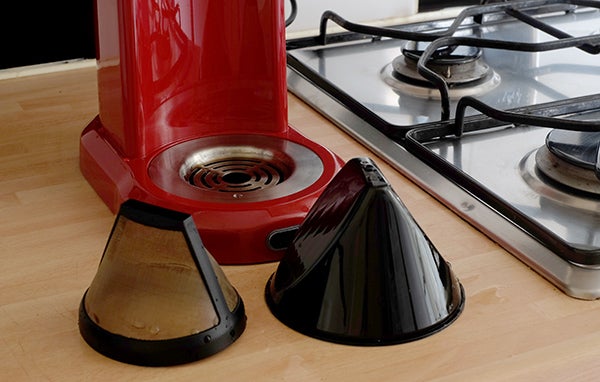 Still, the KitchenAid Personal Coffee Maker isn’t an instant coffee maker. We timed its performance from cold to producing a full flask of coffee, leaving just enough space for a little milk. It took 5 minutes and 40 seconds – not super-fast, but you do end up with an awful lot of coffee.

KitchenAid Personal Coffee Maker – How good is the coffee?

The KitchenAid Personal Coffee Maker produces pretty hot coffee, but it outputs at a temperature designed to be drunk fairly soon after making. You don’t need to wait 20 minutes for your drink to cool down: hot, not boiling. There’s enough heat to add cold milk without ending up with a tepid cup, though.

We were also very happy with the consistency of the temperature. It’s more or less the same, every time.

Of course, the lack of variance is also matched with a lack of control. The Personal Coffee Maker makes cafetiere-style coffee, and nothing more. You can, of course, choose your grounds and how much you put into the filter, which will affect how strong the coffee is, but if you want lattes and mochas, you’re barking up entirely the wrong tree.

Still, the whole point of the KitchenAid Personal Coffee Maker is that it’s a specific tool for a person with specific needs. And we like that. 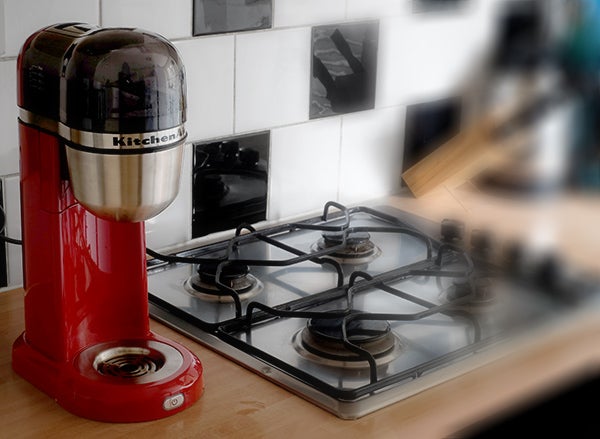 We were a little disappointed with some elements of the insulated mug, though. It has a chunky rubber grip and its stainless steel outer is easy to clean, but the lid is pretty rudimentary.

It uses a twist-to-lock mechanism and has a comfortable drinking spout that’ll help you sip while walking without ending up with a Nescafe-sponsored Jackson Pollock all over your clean white shirt. But the top doesn’t really block coffee from coming out elsewhere should you accidentally tilt a full mug while it’s ‘closed’ – it’ll just come out more slowly. The sides of the top mechanism aren’t rubber sealed at all. 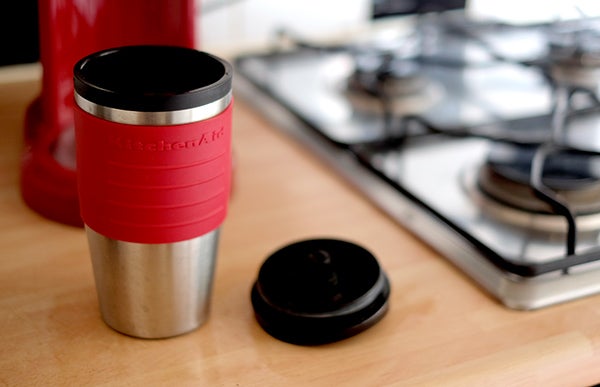 With a slightly open-air approach, the KitchenAid Personal Coffee Maker’s insulated mug won’t stay hot anywhere near as long as a fully sealed vacuum flask. However, it did take around an hour for it to become flat-out cold when used outside on a cold January morning.

Once again, the limitations are in line with the sort of person the machine’s designed for. It’s here to provide morning coffee, not a drink you’ll take out of your bag at 2pm. Our tip: don’t even try it or you’ll end up with a bag drenched in coffee. 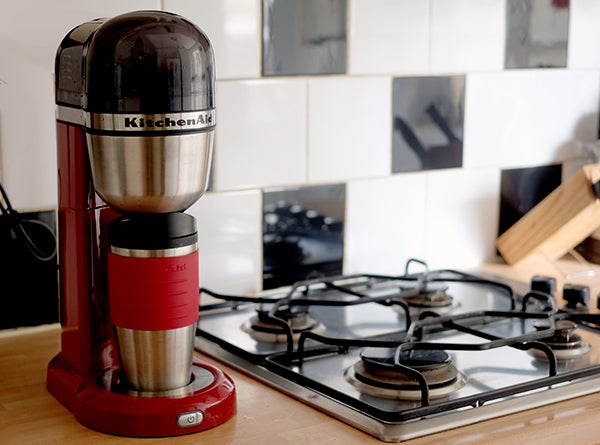 Should I buy the KitchenAid Personal Coffee Maker?

The KitchenAid Personal Coffee Maker isn’t for everyone. If you want a family coffee maker, or one to drip-feed you caffeine all day long, this probably isn’t it.

Everything about its design is geared towards getting you a great big injection of caffeine, most likely once a day, probably in the morning. It’s KitchenAid’s replacement for that early-morning trip to Costa, Pret and the rest.

Producing the filter coffee equivalent of an Americano, which might cost you £2-3 from one of the big chains, it makes financial sense in the long run. And if you live in a household where more than one person would like to get involved, you can always get hold of a second insulated mug – the included one is of a fairly standard size.

With consistent results and KitchenAid’s usual attention to aesthetics, it’s a great machine that’s more convenient than an espresso maker if you drink your coffee in pints rather than shots. However, ease of use and the kitchen ornament factor are important, as you could get hold of a good cafetiere and insulated mug for around half the price.

Short on patience and time in the mornings? The KitchenAid Personal Coffee Maker offers a good fiddle-free fix.