What is the ALDI Ambiano Espresso Maker?

The clue’s in the name: it’s an espresso machine and you can buy it at ALDI.

It’s clearly here for the Christmas 2015 crowd, and in-store it’ll be branded under the “Ambiano” name.

Like most items from the supermarket, the ALDI Espresso Maker offers stunning value, with a look and feel that wouldn’t seem out of place in a machine costing £200. And for those budding baristas out there, it offers a full manual style in a package that doesn’t cost an arm and a leg.

It’s impressive stuff, and while I think the £100 Krups XP5210 is ultimately far more convenient, the ALDI Ambiano Espresso Maker is fairly good deal if you don’t want to spend more than £60. 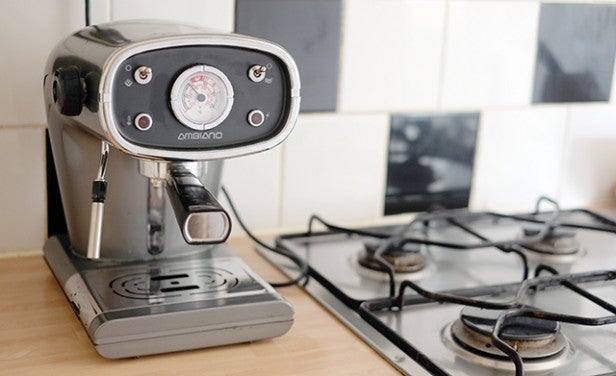 Just like the ALDI Medion laptop range, the ALDI Espresso Maker clearly benefits from the buying power of its parent. It looks and feels significantly higher-end than the Russell Hobbs 19720 Pump, for example.

Its curvy lines, temperature dial and metal switches mean it could easily lead people to believe you’ve spent well over £100 on the ALDI Espresso Maker. The machine has no ALDI branding stamped on the casing either, just a suitably Italian-sounding Ambiano logo. ALDI knows what it’s doing here.

On closer inspection, however, its budget origins become more obvious. While the Ambiano Espresso maker’s body looks like it’s composed from metal – similar to KitchenAid’s kitchen gadgets – it’s actually made from plastic. 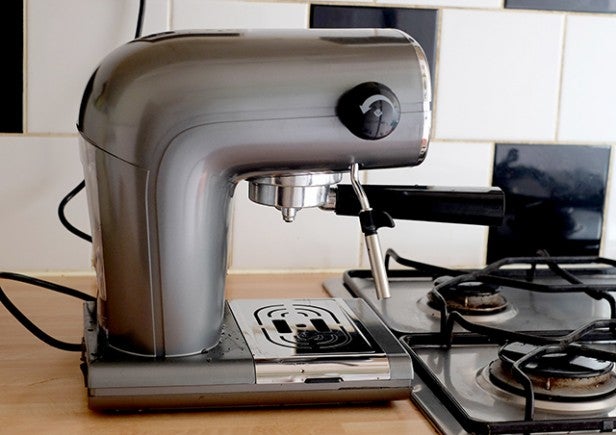 In fact, pretty much the whole thing is plastic, aside from only a few pieces; the head of the coffee arm, the steam arm and the drip tray cover are made from metal. The switches on the front are metal too.

In some respects, it isn’t the most convenient of designs either.

Most coffee machines I review these days offer a power-saving mode, which automatically switches off the unit after a certain period to avoid the machine staying on all day, quietly brewing in the background. The ALDI Espresso Maker lacks such a feature, or at least doesn’t officially advertise one (on the occasions I forgot to turn it off, it did not stay on for 2+ hours), and its power mechanism is frankly a pain to use. 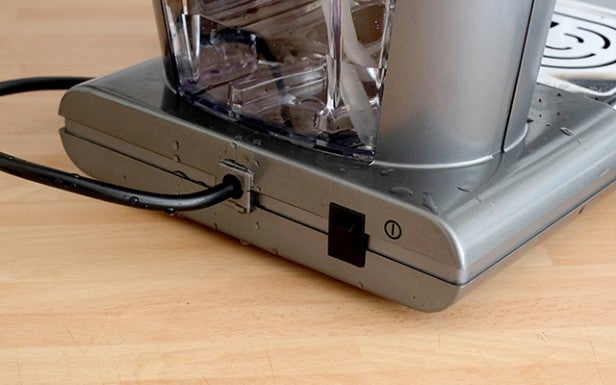 With no auto power-off, you need to flick the mains-style power switch on the rear of the ALDI Espresso Maker every time you want to use the machine. This would be much better-placed on the front of the unit.

The fairly small 0.9L reservoir also sits around the back of the machine. While most espresso machines have rear reservoirs, front or top-loaded ones are more convenient. Here you have to remove the plastic reservoir, and since a rubber-feed hose drops into it, the whole process feels fiddly. 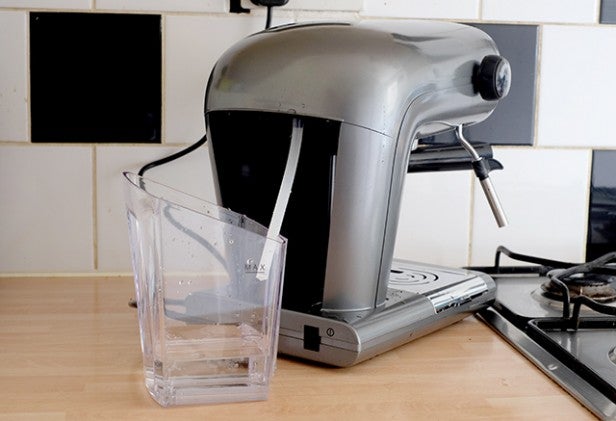 How is the ALDI Ambiano Espresso Maker to use?

The ALDI Espresso Maker has its quirks then, but otherwise it’s very simple to use. Once the rear switch is flicked, the boiler will begin to heat the water to just below boiling point. That’s without you even touching any of the front controls.

The front temperature dial communicates how the boiler is progressing, plus handy orange lights indicate when you’re at coffee brew temperature and when the ALDI Espresso Maker is ready to output steam. I imagine the symmetry of the front plate is the reason why the power button is sat on the rear of the machine.

Similar to just about all espresso machines, the Ambiano Espresso Maker has a separate arm on the side that fires out steam to turn a shot of espresso into a latte. What’s missing is the bit in the middle: there’s no milk jug, so you’ll need to supply your own or just use another mug. 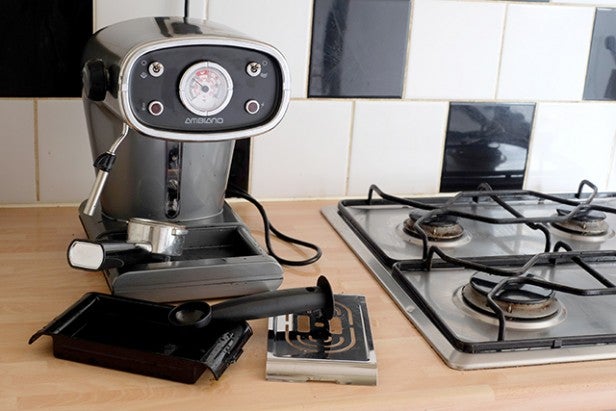 Having looked closely at how the ALDI Espresso Maker behaves, the water temperature remains within the optimal 91-96-degree temperature window, only rocketing up into the higher register when the steamer is switched on.

It’s the steam switch on the front of the machine that flicks the output from coffee to steam. Like all cheaper espresso machines, this one uses a single boiler for both coffee and steam, sharing the same heat source.

There’s no cup-warmer either – another feature sacrificed in favour of the look. 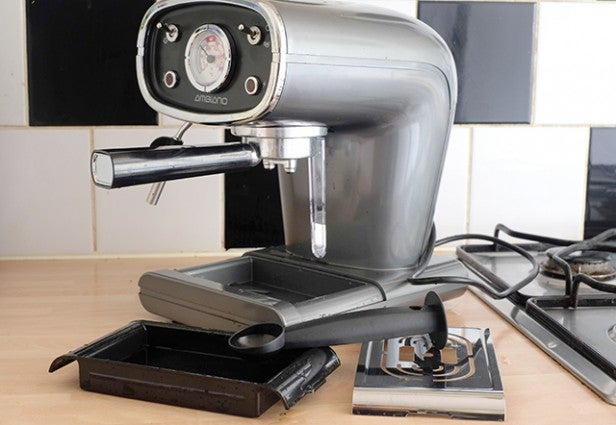 The ALDI Ambiano Espresso Maker is actually a rebranded version of the Cafe Ariete, which is available from Amazon for around £120 with an RRP of £199. While that machine receives some fairly poor reviews, many of the complaints are about the coffee holder sticking in the machine. In this version, however, a mechanism keeps it in place. It requires a twist of the coffee holder, but the design is actually sound.

Thanks to the 850W boiler, water heating is fairly quick, approximately two minutes from a cold start. The totally analogue temperature gauge lets you see how hot the water is even after you’ve turned off the system. 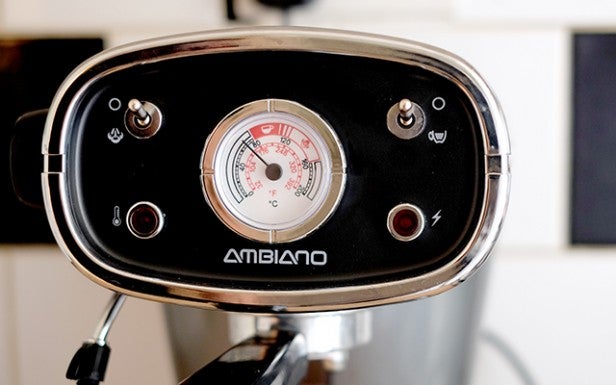 Although the ALDI Espresso Maker will appeal to those who are after a full manual experience, note that it doesn’t have the weight and heft of a pro model. You’ll have to accept that this is lightweight machine that will need to be held in place when you insert the coffee holder arm. To an extent, this is made worse by the fact that the ALDI Espresso Maker uses a full-sized coffee holder.

The majority of machines around the £50-£80 mark have holders that are only really designed for single measures. The ALDI Espresso Maker includes a full double-shot holder, and it sits high enough to allow you to place a proper mug under the spout, not just a tiny espresso mug. As such it’s among the most flexible £60 machines around.

There’s plenty here to both love and hate. 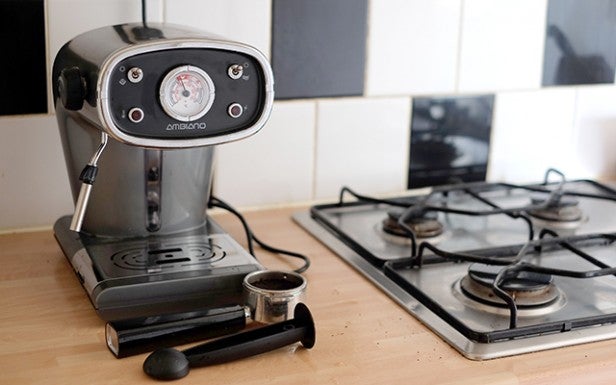 Thanks to its large coffee holder, this is one of the cheapest espresso machines around – one that’s well-suited to those who like their coffee strong. The piddly holders on some of the cheapest machines mean that you’ll usually require a double dose to get the hit you’re after. Can you really be bothered with all that at 6:30am?

In general, the ALDI Espresso Maker’s coffee is good, but it does require some attention. You’ll need to tamp your grounds properly, especially if you want to make two cups at the same time. Failing to do this will result in you getting a dribble out of one side of the coffee holder and stream out of the other.

If you’re a big coffee fan, I recommend that you invest in a proper tamper too – the one supplied with the ALDI Espresso Maker is terrible. It’s your usual “spoon on one side, plastic grounds compressor on the other”, and it isn’t really designed for such a large holder. 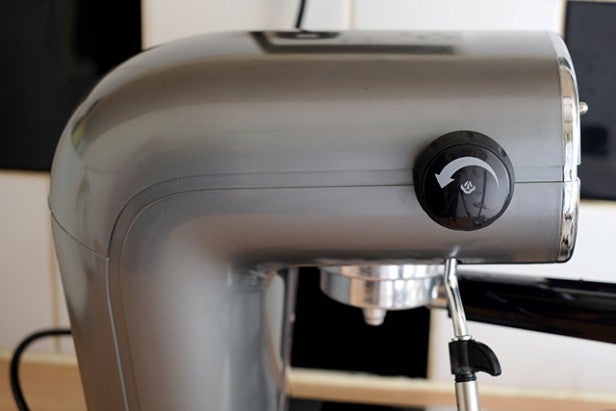 Get your setup right, though, and the ALDI Espresso Maker’s coffee is solid. I struggled to get my latte tasting quite as rich as that made from some £400 machines we’ve reviewed recently, but for £60 I shouldn’t really complain.

Crema quality is fine, but again, it’s wise to pay attention to the main setup to avoid blasting it away as a result of the relatively high position of the coffee arm (a pro) and the at-times inconsistent feed (a con).

The steam arm isn’t bad, but you need to keep an eye on the temperature gauge to avoid a) scalding your milk and b) ending up with water all over your worktop (rather than steam).

The frother is much better at producing great volumes of milk foam rather than higher-density silky stuff, but with a bit of practice you’ll be able to squeeze great milky drinks out of it. 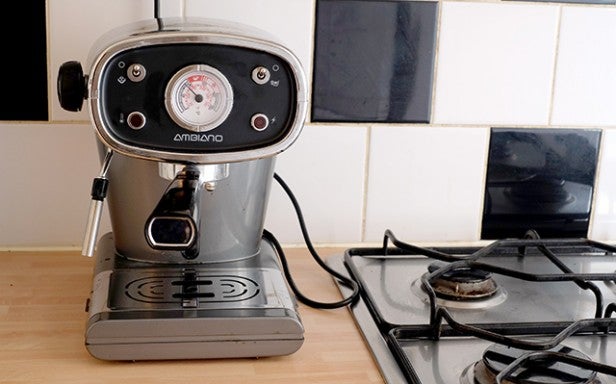 Should I buy the ALDI Ambiano Espresso Maker?

Lack patience? The ALDI Espresso Maker may not be for you, since it has some annoying design traits.

If it were priced at more than £100 – as is the very similar Ariete machine does – then I’d be pushing you elsewhere; more than likely to the much more convenient lower-end Krups machines.

However, for £60 this is a good buy, especially if your coffee machine has to look stylish. Its retro-inspired design will look great in most kitchens, and while it doesn’t have the build to match, neither do many machines at this price.

A quirky but great-value machine, but you’ll need a bit of patience.