Tower Defence is a title many of us have played before. Just like the MOBAs, CCGs or, more recently, Battle Royale games, the Tower Defence genre entered the video game industry with many developers putting their own twist on the idea of casual strategy.

The whole thing may not have taken off or stuck quite as well as some other fine examples, but it’s a genre that’s far from dead. Developer We Are Fuzzy is one such team giving it another chance with Sleep Tight, a twin-stick shooter in which you are what needs protecting.

Channelling arcade titles or the browser games you struggled to hide in class, Sleep Tight gets right to the point with waves of monster shooting mayhem locked behind a big play button and a character select screen.

You start off with a single character and an optional tutorial, but the rest of the 12 available boys and girls, each coming with their own perks, are unlocked through almost nostalgic in-game tasks and challenges – such as reaching a certain wave, or surviving eight without firing a bullet.

And while you’re made aware of exactly how to unlock each character, things are kept retro by teasing each with nothing more than a silhouette. For us, it wasn’t the punky Brooke with her sub-machine gun that caught our attention, but Rosie, a petite mechanic with automatically unlocked (and more efficient) turrets.

Knocking down waves of enemies is an easy enough affair, but by swapping out upgrade trees for physical locations on the battlefield that is your bedroom, your strategic options become limited when it comes to setting up the pillow fort of your dreams.

Planted at each corner of a massive play mat, you’ll heal at one, research tech and perks at another, and equip a shiny new weapon at the next. As a knock-out means ‘Game Over’, risking your life to swap out guns mid-wave isn’t possible – but boxing yourself into a corner with your own defences is a possibility.

Disassembling them will refund some of the cost, but the idea that you can’t vault over a stack of pillows between rounds puts a cap on your imagination. 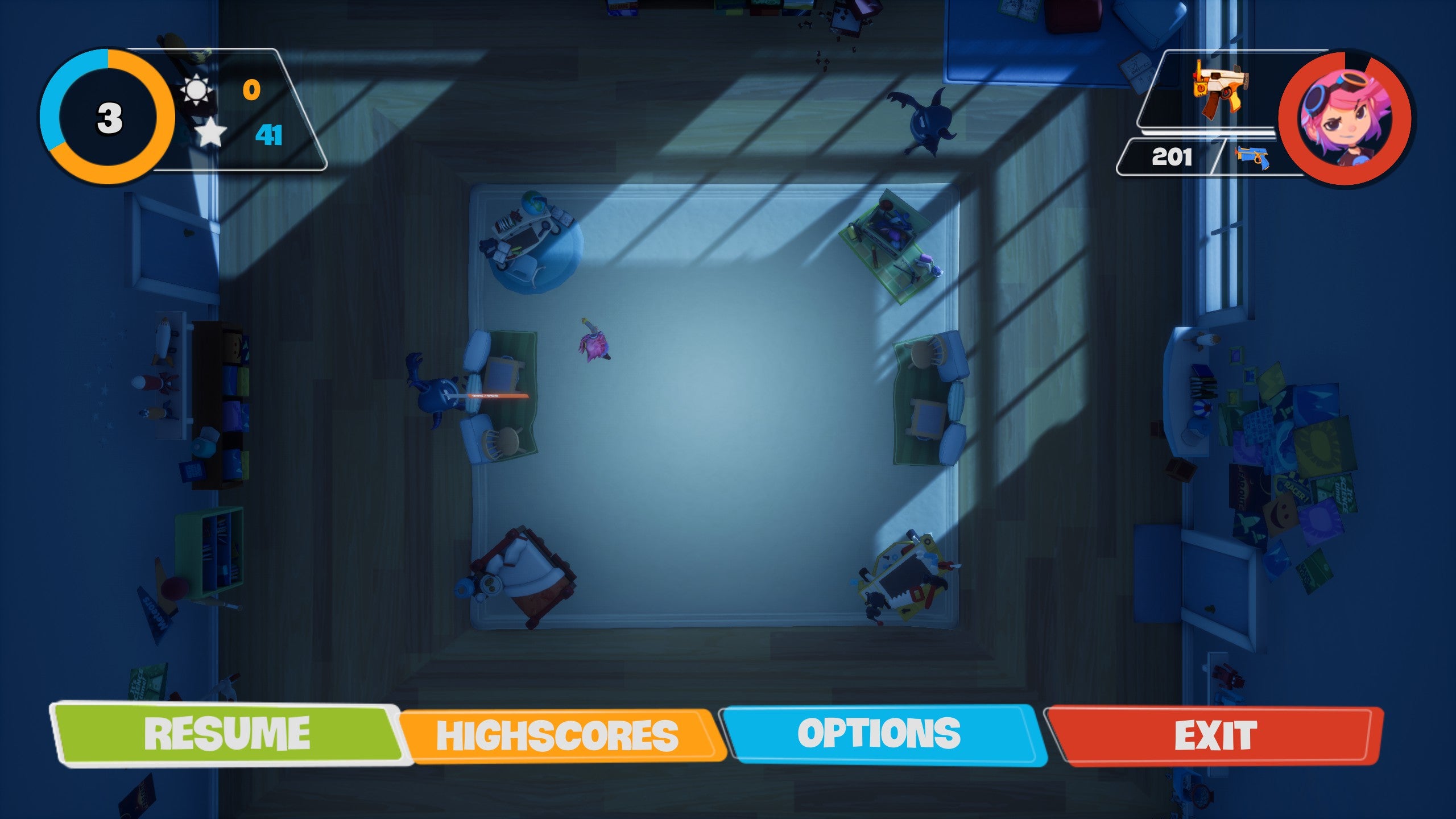 Setting up a fortress of powerful turrets feels like one of the only truly viable strategies. However, the short range of these monster-churning cannons means you feel pushed into building up a corner of the room, where the ‘arms length’ placement of a structure makes it all too easy to wedge yourself into a place that demands precious resources to fix – resources you’ll quickly need for ammunition.

Sleep Tight hasn’t managed to fix the problem of similar wave-based shooters; the initial wave is rarely anything more than standing your ground and shooting until it ends.

When there’s no wall, turret or resource-boosting perk in play, things aren’t all that interesting, and it isn’t until around Wave 9 when they start to pick up. You’ll have a few walls and turrets set up, you’ll know whether you want to hold onto your resources for a tougher Blood Moon wave, or whether to spend every Sun and Star between rounds for HP, bullets and a cool new blaster.

Efficient planning and spending is key as the creatures of the night start to get far more fierce as you approach Wave 30. The somewhat relaxed nature of the gradual build-up paired with child-like visuals and lack of any real violence helps Sleep Tight stand out as a great choice for a parent to pick up for their young child. However, a lack of multiplayer or any real variety stops it from being anything more. 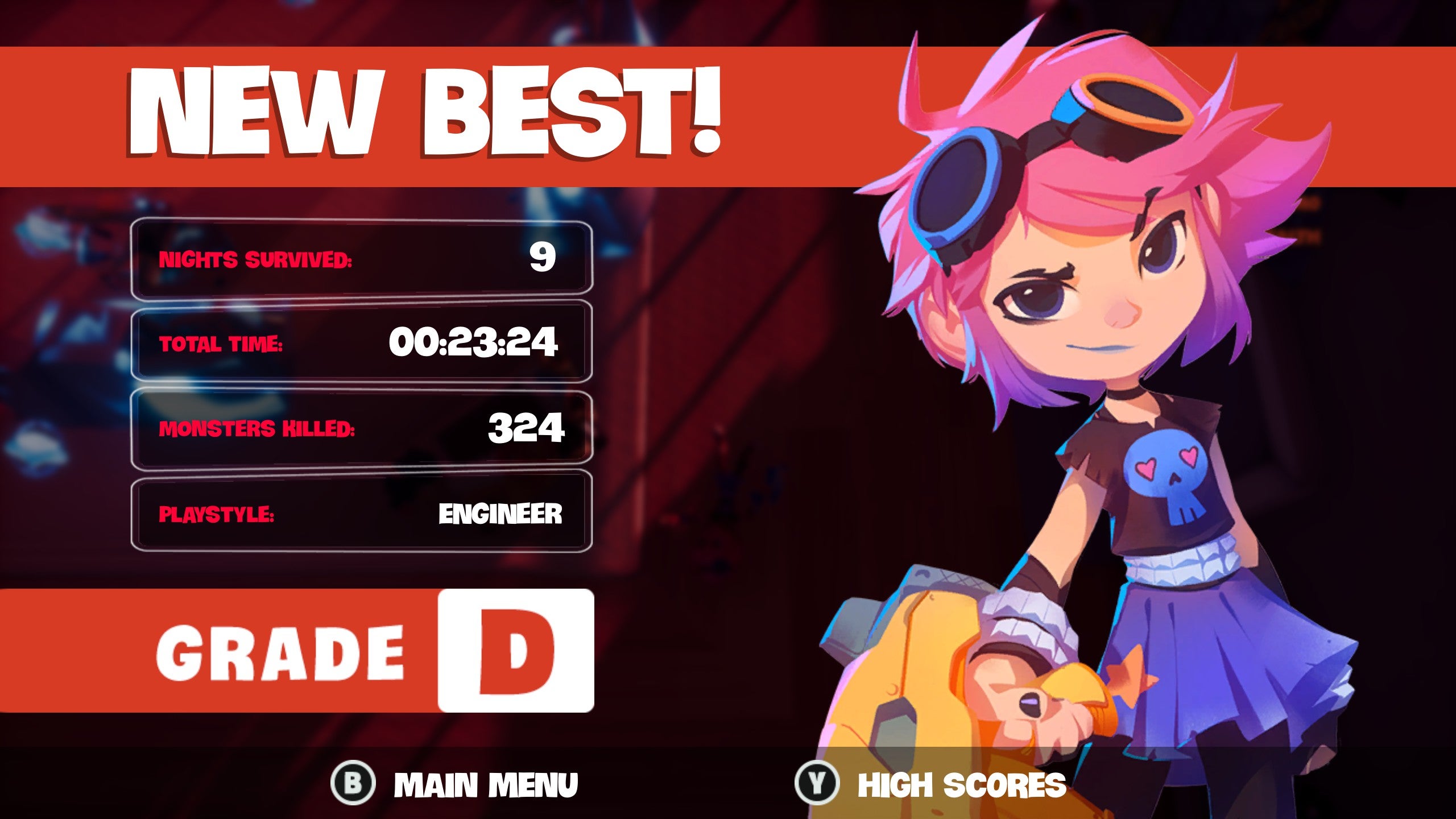 Whether the aforementioned strategic limitations are intended to balance out the game, it isn’t the only shortcoming we need to cover here. Even while feeling like an arcade game at heart, there’s little to no context here. Sure, we’ve all heard of over-imaginative kids complaining about ghouls in their room, but the lines of dialogue slipping out of these kids is a clear throwback to the Breakfast Club kids of the 1980s – something that isn’t noticeably hinted at by anything else.

And while we can certainly complain about there being only a single map, it’s perhaps more saddening to see that the room decor doesn’t even change to give a little more personality to the kid trying so hard to defend it.

It takes too much energy to convince yourself to go another round after each death, and landing back in the same old room – whether you’re a machine-tinkering girl or a cowboy – doesn’t make it any easier.

There’s no denying the appeal of the Nintendo Switch with both kids and adults alike, but Sleep Tight feels like something of a stepping stone designed only for the younger audience. It’s a gateway game to help kids grasp the idea of strategy and twin-stick movement.

Varied character unlock methods will serve up some 16-bit nostalgia to parents, while teaching kids to think outside the pillow fort. Sleep Tight is an inoffensive strategy shooter who’s shortcomings might just elude a more inexperienced audience.