Another sign of Sky’s ‘bias’ towards the Apple platform can be seen with another of its impressive ‘extra’ services: the Sky News app. Again this is available free to Sky subscribers, and the iOS version is a stellar effort, combining gorgeous presentation with reams of streamed video and an inspired interface. This makes it one of the most widely used apps in our library. On our resident Sony Tablet S, though, the Sky News app is a painfully second-rate by comparison, with a much more basic presentation and less content. 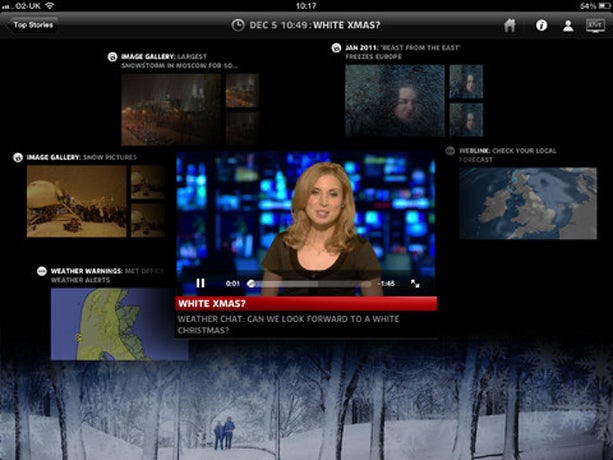 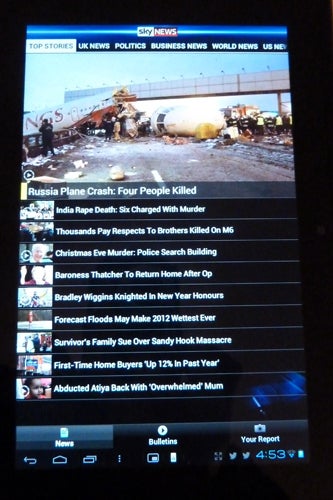 If you are an Apple device owner, though, Sky News is another indispensable addition to the Sky package that’s certainly one of the most used apps on our iPads.

As is the recently updated and again free SkyPlus app. Even on its most basic level, the way this app allows you to use tablet and smartphone swiping navigation systems to browse Sky’s huge electronic programme guide is a boon, as it enables you to search and browse much more swiftly and intuitively than you can using Sky’s on-TV menus. Plus it lets you keep watching TV full screen while you engage with the listings on the second screen.

Sky has recently made the SkyPlus app even more essential on iOS devices, though, by enabling it to sync with your Sky box so that you can see and access stuff stored in your planner, as well as controlling playback features using a simple but effective swiping and tapping system. As of December 12 you can also access on-demand content listings on iPads, iPods or iPhones from anywhere in your home, and get your Sky box to download them remotely for watching later. 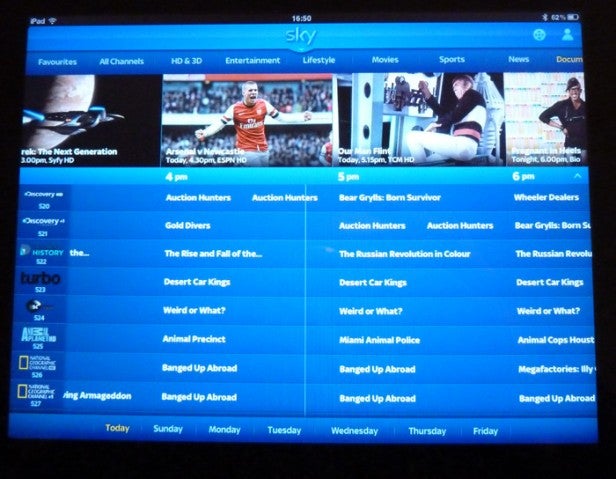 The catch, once again, is that all versions of the SkyPlus app aren’t equal, with Android again getting the rough end of the stick. On our Sony Tablet S, for instance, the SkyPlus app makes no effort to sync with our box, and offers precious little control over it. It’s essentially just a listings app.

Let’s turn next to the improvements Sky has made to its main broadcast service and hardware. First, the EPG was switched to an HD version which instantly made it look cleaner and more in-tune with the modern world. In fact, it was a pretty much essential development to support the introduction of the icon-based approach of the menus for the Anytime on-demand service.

The EPG was improved further in relatively recent times by an adjustment to its layout that added two more channels to the amount of channels visible onscreen at any one time. This might not sound a big deal, but it actually made surfing the listings much less tedious. Though as noted already, the Sky app has now become our default position for EPG searching and surfing.

Sky also introduced the extremely handy option to ‘undelete’ – or ‘relete’, according to Jonathan Ross! – programmes you may have accidentally deleted. 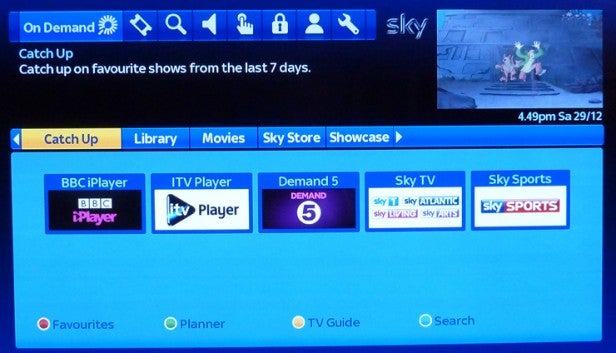 For all the hundreds of channels available on Sky’s platform and countless on-demand titles besides, it can hardly have escaped Sky’s notice that the BBC iPlayer has been the on-demand video service that’s really opened the eyes of the mainstream to video streaming. So it wasn’t all that surprising when Sky added the BBC iPlayer to the Catch Up section of its On Demand area. This has now been joined by the ITV Player and Demand 5, with 4OD due to go live in 2013.

As well as being useful in itself, the addition of these services gives Sky a feature you traditionally had to look elsewhere to get, and even makes Sky look at least vaguely ‘open platform’ in a way most people wouldn’t normally associate with the brand.

The last thing to cover here is the simple channel provision of the Sky platform. And here, in sheer quantity terms, Sky is in a league of its own, offering literally hundreds of channels for you to choose from. A good many of these are so niche, of course, that they probably won’t ever even register with you. But as full time users of the service, it also seems to us that the overall quality of the channels on offer has increased. (Even if the main reason for this is the simple addition of the Sky Atlantic!)