Shenmue is one of those games. It was always talked about with reverence, and only a select few had unlocked and understood all of the game’s mysteries. With the upcoming release of Shenmue 3, SEGA has put out a HD remaster of Shenmue I and II, and by golly, I was missing out on a game that ended up being something pretty special.

Looking at traditional open-worlds, your map is littered with objectives, things to do and run and look at. Shenmue’s design takes you to a time before map-revealing watchtowers, before immensely huge impersonal open worlds and delivers an experience that still remains almost unparalleled today.

You take the role of Ryo Hayazuki, who witnesses the murder of his father by the hand of shadowy figure Lan Di. Shenmue tells the tale of Ryo picking up the pieces and unravelling the mysterious circumstances of his father’s death. You explore Yokosuka, trying to look for clues. The original Shenmue may not be the biggest open world there is, but it is a type of open-world that we rarely see – one that exists in spite of the player. You might see someone working in a shop during the day, run into them at a bar later, and into the night find them stumbling around Dobuita trying to get home.

The feeling of playing Shenmue is intimacy – intimacy with your surroundings, the characters you encounter and also with the pace of the game itself. Don’t expect to be doing high speed motorcycle races against gangsters in the street. Instead, it’s a smaller scale affair that will find yourself chatting to locals for clues, working your day job, and if someone says they’re only available tomorrow at midday, you’ll have to find other things to do until then. Lucky for us, while Shenmue might be small, it’s incredibly dense. 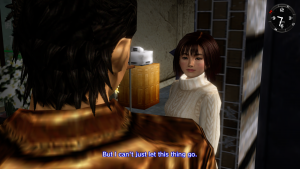 You might go *sigh* forklift racing, and following the same schedule for days on end to make some money, with the occasional fight. Shenmue was originally set to be a spinoff to Virtua Fighter, and as such, the kinetic force of fighting as Ryo Hayazuki, combined with tight controls, is an absolute treat. However, fistfights are not the only way of fending off baddies. During certain scenes, you will also have occasional Quick Time Events, something that originated with Shenmue.

The level of density and interactivity in the world cannot be overstated. You’ll eventually be able to walk around knowing the streets and where to find people and places. While it’s not huge, it is packed with detail, and you can even take a first-person view to view local map signs, because Shenmue makes you memorise where everything, and everyone is.

While it might seem unfriendly to players, in order for the game to resonate, you have to be receptive to some of its quirks. Messing around and wasting time before a scheduled meeting, or having to wrestle with the somewhat antiquated controls, or making sure you’re looking out for street maps all comes with the experience of playing the game. If you finding yourself missing a minimap and wanting to rock straight up to the next main objective, the game might not be for you, but ultimately a lot of the experience is about this feeling of being lost in an unfamiliar place and coming to terms with that.

Shenmue 2 further expands the scope of the saga by bringing us to Kowloon, Hong Kong. Being a stranger in a strange land, Ryo has to navigate the bustle and underbelly of Kowloon, right there with you. The scope of the areas in Shenmue 2 grows massively, but somewhat loses some of the charms of the original game being set in Ryo’s hometown.

It also makes some decent quality-of-life changes, such as being able to change the time so you’re not having to wait around in addition. Street signposting is clearer, so you should be able to identify places and districts quicker. The change of scenery is welcome, but it does lose some of the old Japanese charm of walking down Dobuita’s streets.

This doesn’t stop Shenmue 2 being a treat to play, however, as grand setpieces and characters set the tone and up the ante massively, especially when compared to the somewhat anaemic plot of the first game. Shenmue 2 is where things really get going, and the late 80’s Hong Kong setting matches that perfectly. 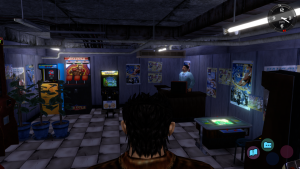 The remaster generally does a decent job of recreating Shenmue for modern consoles. As a first-time player, it was welcoming to have options to letterbox the screen, choose to play the game exactly as it was presented on the Dreamcast, or to play in Widescreen at a high resolution. This also comes with the feature of being able to switch the Audio Language from Japanese to English, so you can pick whichever you prefer. However, there are some significant faults with the remaster.

The audio mix is all over the place. Some sound effects will be deafeningly loud, and you might encounter some graphical glitches here and there. This is enough to take you out of the entire experience, and as a first time player, encountering these issues in such stellar titles is disappointing. It breaks the immersion and leaves a sour taste in your mouth.

According to the publisher, some of these technical issues are due to be patched out for launch – but there are more problems than we were informed about prior to playing the pre-release code.

Technical caveats aside, Shenmue 1 & 2 are an absolute joy to play. It’s clear to see that the lineage of the game continues to the Yakuza series, which so closely follows the density and scope of this series. With eclectic writing and characters in addition to things to do and places to explore, Shenmue 1 & 2 are brilliant. Very few older titles of that generation still hold up so immensely well today. A stone-cold classic.