For now, at least, we’re inclined to roll our eyes whenever a brand starts talking about 8K. After all, the industry still hasn’t established 4K yet, at least from a content perspective.

This eye-rolling action was replaced by outright laughter when I sauntered onto Sharp’s CES 2015 stand and found a ‘Beyond 4K’ TV claiming to deliver something like an 8K effect from a native 4K pixel count. Unexpectedly, though, after spending time studying this seemingly optimistic screen, my laughter gradually turned to a begrudging respect.

The reason Sharp is trying to claim a 4K TV can actually deliver 8K-like pictures is its Quattron+ technology. First introduced at last year’s CES as a way of getting a 4K-like resolution from a 2K native pixel count, Quattron+ essentially splits each of a screen’s four (red, green, blue and additional yellow) sub-pixels in half horizontally, doubling the perceived horizontal resolution. 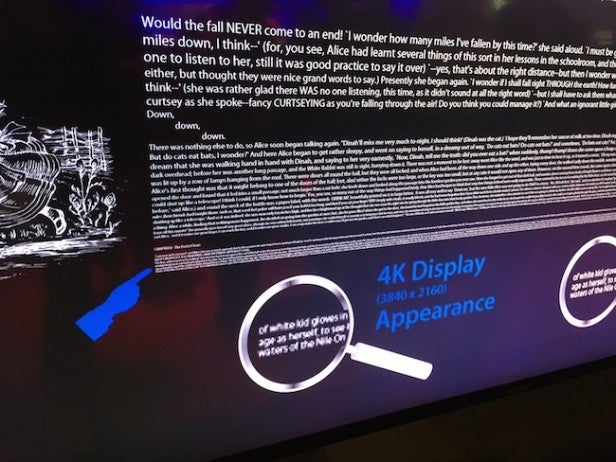 My experience of Quattron+ on the Full HD TVs last year was mixed. The technology really could deliver more detail than a normal HD TV, but the effect was’t up there with a true 4K image, and areas of very small details tended to look quite noisy. Also, of course, Sharp’s pseudo-4K option was coming out at a time when there were already lots of genuine 4K TVs around, so it just seemed like an unnecessary compromise and source of confusion that the market didn’t need.

When it comes to 8K, though, native 8K TVs seem unlikely to be either widely available or remotely affordable any time soon, so there’s more of a potential space in the market for a 4K TV that claims a sort of 8K performance.

Plus, so far as I was able to tell from the best part of half an hour hopping between an 85-inch ‘Beyond 4K’ screen and a same-sized native 8K model sat next to it, the new version of Quattron+ is looking much more effective than last year’s pseudo-4K version was.

Sharp was running the same source material into each screen – material which included typically resolution-friendly fare like distant shots across bustling cities, a test signal including fine details in some areas designed that should only be properly delineated by an 8K screen, and a page of writing that shrinks as it moves down to a point where you’d struggle to read the bottom text on anything other than an 8K screen. 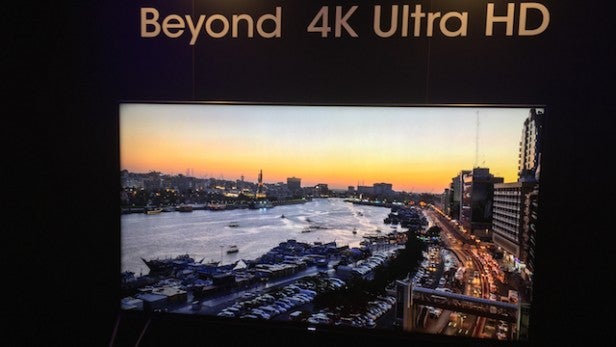 With every bit of this material, even the 8K test signal, the pseudo-8K screen really did manage to render a level of clarity and detail that seemed to get exceedingly close to the impact of the native 8K panel.

So confident was Sharp about the achievement of its Quattron+ set, in fact, that it was providing magnifying glasses so that viewers could focus right in tight on the Quattron+ model’s pictures right down to pixel level. With these magnifiers you could both see that there did indeed seem to be detail resolved in the 8K area of the test signal feed but the Quattron+ TV.

Looking at more ‘natural’ footage I was surprised by how well the pseudo-8K screen managed to almost match the clarity of the native 8K panel, even in images containing a bit of motion. The pseudo-8K TVs pictures don’t look obviously more processed than those of the native screen, and I was even more startled to note that there only seemed to be a very slight reduction in the colour tone subtlety on show in the non-native 8K screen.

Looking at the tiny white writing against a black backdrop section of the demo material, there was fractionally more colour bleed over the edges of the writing. And if we stood really close to the screens the Quattron+ model revealed a trace of jaggedness around edges and some faint horizontal line structure that wasn’t visible on the native 8K model. But these issues are hard if not impossible to spot from a sensible viewing distance, and crucially I couldn’t see the sort of gauze effect seen with the previous Quattron+ 2K TV. It’s possible the blackness around the text may be helping to hide such artefacts, but I didn’t see any obvious nasty side effects with other brighter content areas either. 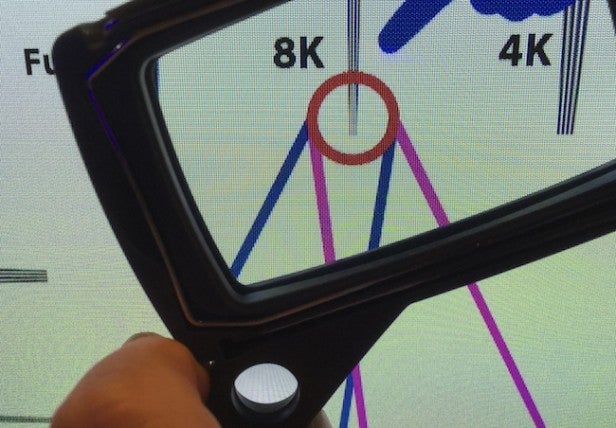 While Sharp’s Beyond 4K demo mostly came as a pleasant surprise, though, there are a couple of riders to note. First, in every way bar its basic resolution the 8K screen actually looked worse than the Quattron+ model. Its colours looked washed out, its motion suffered with more blurring, and most damaging of all it was highly prone to backlight clouding and poor contrast. The Quattron+ model enjoyed much richer colours and contrast, which helped emphasise its sharpness making an exact like for like comparison harder to achieve. Clearly the native 8K panel is at a pretty early prototype stage versus the Quattron+ Beyond 4K one.

It also has to be said that in keeping with most other Sharp Quattron LCD TVs we’ve seen in recent times, the contrast of the Quattron+ Beyond 4K TV in the demo on Sharp’s CES stand was pretty underwhelming, with obvious backlight greyness of its own.

Still, overall Sharp’s latest attempt to make Quattron+ a serious feature is looking much more worthwhile than its first previous one, making a vaguely affordable pseudo-8K set a definite possibility for 2016.