Mentions of 3D at CES 2015 are about as common as gold-plated Ford Fiestas. But it’s fair to say that its appearance on Samsung’s stand is certainly making quite a stir – not least because the way Samsung is using it is just impossible to ignore.

Last but not least, the 3D in question is being delivered without the need for any glasses. Yes, that’s right… Ah, you get the idea. 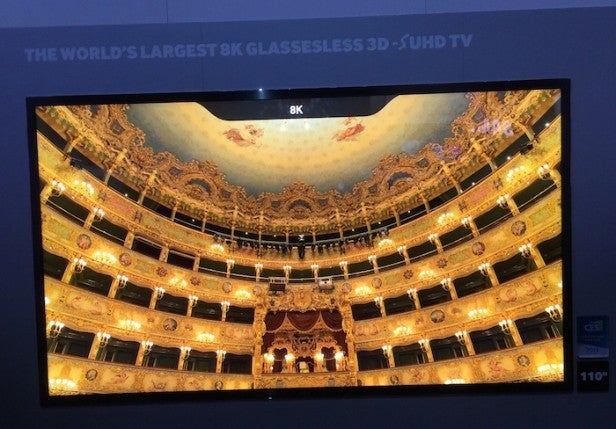 With so much going on it’s hardly surprising that we had to beat people out of the way with our CES Press bags to get near the screen, and wished to god we’d got a selfie stick to help us get our photos. What was surprising, though, was just how rubbish the TV was. Or at least the most headline part of it.

Wanting understandably to have its cake and eat it, Samsung was demoing its cutting edge screen by switching every minute or so between native 2D 8K content and glassless 3D content. Unfortunately, though, all this approach succeeded in doing was making us think more than ever that glasses-free 3D is just never going to work.

With the 8K 2D content Samsung’s 110-inch screen was mind-blowingly good. The shots of towns, buildings, concert halls and other easy-on-the-eye, highly detailed sources all looked nothing short of incredible, leaving no technological ‘wall’ whatsoever between you and what you were looking at.

Interestingly Samsung was encouraging people not to get too close to its monster screen, running counter to the argument often made by resolution cynics that you’re encouraged at TV demos to stick your head right up to high resolution screens. But even from a sensible distance the effect of the 8K resolution even over and above 4K was immediate and intense. Rebels that we are, we did make a break for it and managed to stick our heads within a foot or two of the screen. But even then we were unable to see a trace of visible pixel or line structure in the flawless, incredibly life-like images.

Do we think you really need 8K at screen sizes significantly smaller than this 110-inch one? Well, we’d have to see some for sure, but for the moment we feel 85 inches might make a sensible 8K cut-off point. But there is certainly no question that 8K rocks and rocks hard at 110 inches.

In fact, it rocks too hard. For switching between the native 8K footage and the supposedly headline-grabbing glassless 3D pictures was like rubbing vaseline onto your eyeballs. 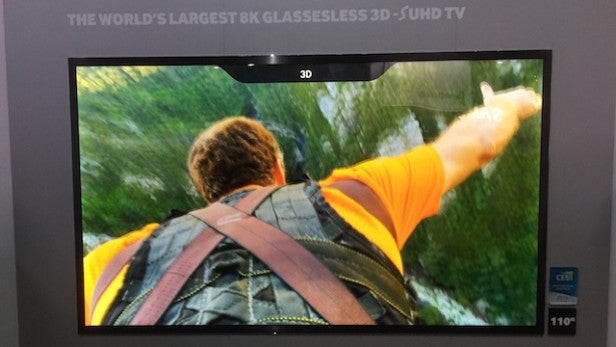 As soon as the 3D pictures – mostly footage of a nutter jumping off a mountain – flicked on the drop in resolution was so great you felt like you’d gone all the way back to standard definition.

Nobody seemed entirely sure what resolution the 3D footage was filmed in, but our guess would be that it was 4K. However, thanks to the way glassless 3D technology has to eat up pixels to deliver its 3D effect it ended up looking about as 4K as an episode of Are You Being Served?

And that’s the bits that actually looked in focus. With every frame of the glassless 3D footage we could see parts – sometimes large parts – of the picture that just looked plain out of focus. The worst offence in this regard came with a shot of a woman zip-lining towards the camera, where basically the entire part of the image containing the woman – the focus part of the image – was blurry and indistinct to a degree that made it look completely out of kilter with the rest of the picture.

Another problem for glasses-free 3D playback is that pixels also have to be eaten up to deliver multiple viewing angles. At least the Samsung 110-inch model manages to deliver a claimed 40 supported viewing angles thanks to its 8K native pixel count (you usually get less than 10 with 4K glassless 3D technology), but even that wasn’t enough to stop your viewing experience from routinely being disturbed by visible seams in the picture, or distracting distortions if you moved your head so much as a few inches from your starting point.

It’s worth adding, finally, that Samsung’s glassless 3D effect doesn’t deliver as much depth as a with-glasses one, either.

So severe is the step down in quality when you switch to 3D on the Samsung 110-inch TV that it’s hard to imagine that anyone with the financial wherewithal to buy the set – which we’re assured is intended for sale in the latter part of the year – would ever try the 3D for more than five minutes. Meaning that the supposed glasses-free rebirth of 3D still looks as far away as ever.