With neither the 90LE757’s design or smart features impressing much, there’s a lot of pressure on its pictures to deliver. And thankfully that’s exactly what they do.

The good feelings start with the panel’s black level response. As we’d hoped, the use of a direct LED lighting system rather than an edge one leads to a killer combination of good black level depth and excellent light uniformity, with no sign of the sort of light pools or clouding you tend to get with edge LED technology on large screens.

These two facts immediately help dark scenes feel natural and immersive – especially as dark parts of the picture post calibration manage to retain good levels of shadow detail, avoiding the common hollow look caused by the way LCD technology has to take brightness out of dark scenes to deliver a convincing black level. 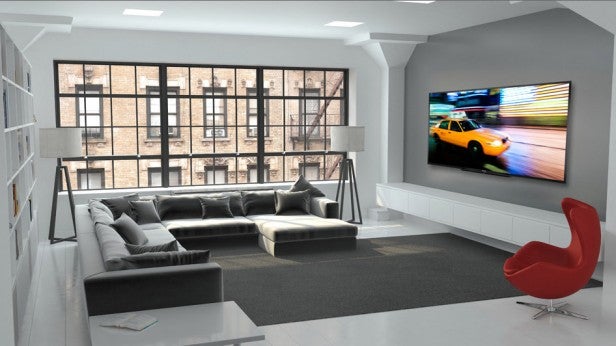 As noted in the setup section, we tended to leave the backlight set quite low when watching films in dark rooms to secure the best black levels. But then we’d expect to have to do the same with the majority of other LCD TVs too.

Crucially, though, reducing the backlight to boost black levels doesn’t stop the image from still looking punchy and dynamic, or bright scenes looking suitably radiant and eye-catching. This suggests that the native contrast performance of Sharp’s monster panel is really quite good.

While using a local dimming system might have improved the 90LE757’s black levels and dynamism, it’s also quite nice not to see any of the problems associated with local dimming – specifically haloing around bright objects. Such a flaw would have been very noticeable on a screen this large.

After only a little calibration we managed to get a nice colour performance out of the 90LE757 too. We did feel the limitation of the set’s 8-bit colour processing at times – most notably in a slightly ‘patchy’ look to some skin tones. But after removing a slight orange bias colours looked natural and engaging.

They’re surprisingly vibrant, too. Experience with some other super-sized TVs has shown brightness becoming quite severely compromised in the quest for enormity, especially given the current strict regulations on power consumption. But the 90LE757’s brightness is pretty potent, helping it make a very persuasive argument as to why a 90-inch TV is a better bet for your average household than a projector. After all, with the TV you don’t have to be watching in a perpetually dark room to enjoy a dynamic picture.

After a little work we also felt satisfied with the sharpness of the 90LE757’s HD images. The ‘work’ involved, specifically, was marginally reducing the default sharpness value so that images don’t look too noisy; making sure all DNR processing was completely turned off (as this can cause excessive smearing); and reducing the contrast setting.

We also tended to turn off the Motion Enhancement feature, as this could cause a little blurring at times as the processing struggles to keep up during camera pans. There’s also some haloing around fast moving objects with the motion processing on – an artefact that’s extra noticeable on a 90-inch screen.

With this in mind, it’s just as well that the screen’s native response time isn’t bad, enabling motion to look reasonably clean and crisp without the motion processing in play. Sure, there is some loss of resolution during fast motion, and a little judder too. But neither issue is excessive, and so they’re preferable to the processing artefacts the motion processing causes.

Other little negatives beyond those already mentioned are that black levels can become a little inconsistent if you’re watching from a wide angle and that 90in does seem pretty much the outside distance that HD can be stretched on a TV. Essentially the frailties in anything less than strong HD sources can become uncomfortably visible when shown on such an epic scale, and the lack of pixel density and sharpness versus the images you see on 4K/UHD screens is palpable.

Though as noted in the introduction to this report, this latter point is arguably moot given the hefty price gap between the 90LE757 and big 4K screens. 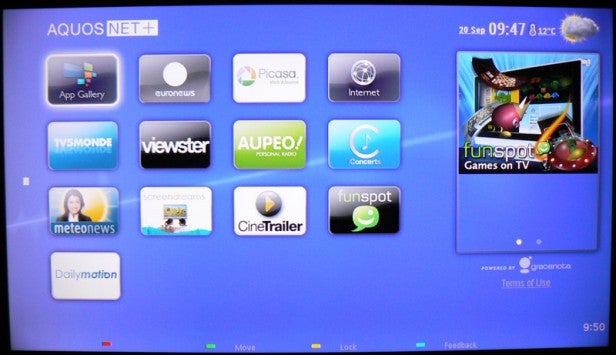 We also occasionally spotted a little purple haloing around some objects when panning a video game landscape, but this doesn’t show up often enough to be a deal breaker.

We’ve been talking about HD pictures so far, and not surprisingly we weren’t exactly expecting much from the 90LE757’s standard definition pictures considering how far they’re being stretched. But you know, they’re really not that bad. Sharp’s upscaling proves surprisingly sound, adding enough detail to stop pictures looking excessively soft while also doing a good job of suppressing/removing source noise like MPEG blocking and mosquito fizzing.

Clearly anyone buying a 90-inch TV would be insane not to feed it as much good HD content as possible, but if occasionally standard def just can’t be avoided, then at least it’s not as nightmarish a sight as might have been expected.

Finally we really should make a point about the sheer impact of seeing good pictures on a 90-inch TV. Essentially it tips the balance from simply watching TV into the world of genuine home cinema. Spectacular.

Used as the main TV for the review period
Tested for more than a week
Tested using industry calibrated tools, discs and with real world use
Tested with broadcast content (HD/SD), video streams and demo discs
Previous
Sharp LC-90LE757 Review Next
3D, Sound and Conclusions Review