We’re not sure what’s the most remarkable thing about the 90LE757: the fact that it’s a 90-inch TV, or the fact that it’s a TV from Sharp that’s actually sitting in our test room, rather than simply being a model number we’re reading on Sharp’s website. Sharp has been absent from the UK TV review scene for so long we were starting to think the absence may be terminal. But it’s back at last – and what better way to announce your rebirth than by rolling out as big a gun as the 90LE757?!

In case you’d failed to properly register the fact that 90LE757 has a 90-inch screen, let’s underline the point right away by stressing that it really is humungous. For as if the immense screen wasn’t imposing enough, Sharp has framed it with a bezel that’s strikingly wide by modern standards. 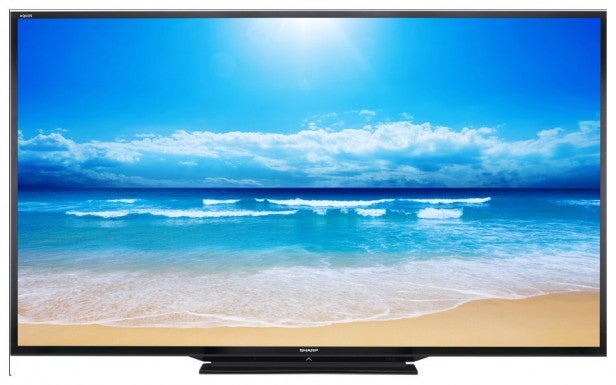 While this is likely an eminently sensible decision given the acreage of screen the frame has to support, it won’t help the 90LE757 win any ‘best dressed’ competitions. But then if you’re buying a 90-inch TV, surely aesthetics are far from the main thing on your mind!

After all, a screen this big will be for most normal people (as in, not Premiership footballers) a home cinema tool, not something they’re going to just pop into the corner of their living room.

It’s worth adding, too, that despite also being chunky in the posterior department, the 90LE757 is remarkably light by huge TV standards, meaning you should be able to wall hang it without fear of serious structural damage…

Any screen as unreasonably – but lovably – vast as the 90LE757 inevitably raises two instant questions these days: how much is it, and is it a 4K model? The answer to the first question is that John Lewis is selling it for £10,999 (including a five-year warranty), and the answer to the second question is no.

These answers need more scrutiny. First, clearly the best part of 11 grand is a substantial slab of cash by anyone’s reckoning. And the idea of such a huge screen not carrying a UHD pixel count probably troubles the more forward thinking of our readers. Especially as you have to wonder if normal HD can really comfortably be stretched to 90 inches when not first being fed through the actually very small starting point of a projector imaging device. 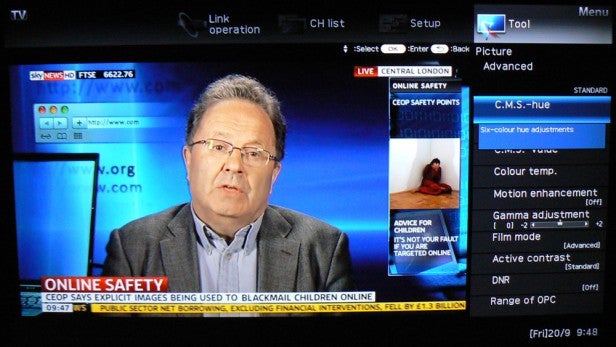 The issue of whether or not a 90-inch screen without a UHD resolution is actually good enough in performance terms we’ll cover in the picture quality section.

Looking for other features of the 90LE757 beyond its bigness, we find a roster of connections that includes four HDMIs, three USBs for both playback of multimedia from USB storage devices and timeshifting TV programmes to USB hard drives, and a LAN port to support DLNA PC networking or access to Sharp’s online service.

Rather alarmingly, though, the 90LE757 doesn’t carry built-in Wi-Fi. You can add Wi-Fi via an included USB dongle, which is a relief. But the lack of an integrated solution does make you wonder about the vintage of the 90LE757’s chassis.

Normally at this point in a TV review we’d briefly mention a brand’s online/Smart TV service while referring you to a more detailed feature elsewhere on our site. This is not the case with the 90LE757E though, for the simple reason that its AQUOSNet Smart TV platform is so far behind the competition that it’s almost embarrassing.

A quick count of the apps on offer rustled up just 13, versus well over a hundred on Samsung and LG’s platforms. What’s more, we’d argue that only two of these 13 apps are of any real use to UK users: Skype and YouTube. And you can only use Skype if you splash further cash on an external USB camera.

The absence of any serious video streaming platforms – even the BBC iPlayer, which we’d rashly assumed was now ubiquitous – is hard to countenance, and makes us wonder if Sharp actually has anyone at all working on establishing content relationships for its UK TVs.

The sorry state of AQUOSNet in the UK is thrown into even harsher relief when you compare it with the American version of the same service, which has way more content and is much more attractively presented.

Turning to the 90LE757’s key screen technology, it’s a relief to find it using a direct LED lighting system rather than an edge one. Controlling light from the edges across such a vast screen would likely have been problematic to say the least. There’s no local dimming for the direct LED lights on the 90LE757 though, which is a pity but probably essential in allowing Sharp to keep production costs down.

The 90LE757 also doesn’t employ Sharp’s Quattron technology, which adds a yellow sub-pixel to the usual red, green and blue ones for enhanced colour resolution, and it only claims a 200Hz motion processing system versus the much higher – if slightly ‘concocted’ – numbers quoted by many rivals. Though actually neither of these points need necessarily be a bad thing given that Quattron tech can have a negative impact on contrast, while shoving loads of Hz into your TV can lead to images looking processed.

One thing the 90LE757 does support is active 3D playback – which could be pretty exciting given that our experience suggests that the effectiveness of 3D is directly related to the size of the screens it’s appearing on. It’s a pity, though, that Sharp couldn’t see its way to including even a single pair of active 3D glasses with an £11,000 TV.

The 90LE757 is well equipped with picture adjustments. There’s a full if rather fiddly (due to the cramped nature of the onscreen menus) colour management system, a good level of control over the TVs motion processing options, and some extensive and very welcome flexibility on offer when it comes to tweaking the contrast and backlight settings.

We’d strongly recommend setting the backlight quite low when watching in dark rooms in order to secure the best black levels, with the contrast at around 75–8% to make sure images still look punchy but don’t look stressy or over noisy.