As hoped, watching 3D on a screen as big as this is great fun. When 3D completely fills your field of vision like it can with the 90LE757, it suddenly makes sense as a home cinema format in a way it never does on a smaller screen.

It’s not just their sheer size that makes the 90LE757’s 3D pictures fun, though. They’re also startlingly bright and colour rich for a TV using the active 3D format, and as a result the 3D colourscape looks unusually natural. 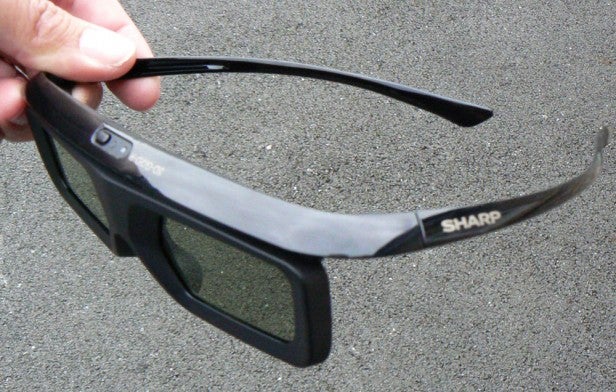 There’s just one problem with 3D: the appearance of a little crosstalk ghosting noise around the edges of bright objects, especially if they’re in the distance.

Our test sample also exhibited a curious shadowy vertical stripe around three inches wide just to the right of the screen’s centre during 3D viewing. However, Sharp assured us it’s never seen such a stripe before, so it’s likely just a flaw in our specific testing sample.

The 90LE757’s colossal chassis has been put to good use in accommodating some decently powerful speakers, including a well-integrated subwoofer for boosting bass and taking pressure of the main speakers.

The TV is thus capable of going impressively loud without distortion and without the soundstage becoming cramped or muddy. Voices always sound realistic and clear, and we were also relieved to find voices sounding as if they’re coming from the heart of the screen rather than from its outer edges as we were worried might have happened given the screen’s vastness.

Treble detailing isn’t particularly strong if we had to be picky, but overall the 90LE757 manages to produce a sound performance big enough to do its pictures justice – and you couldn’t reasonably ask for much more than that!

If like us you’re loving the idea of gaming on a 90-inch TV, you’ll be pleased to hear that if you use the set’s Game picture preset and turn off as much picture processing as possible, input lag drops to an impressively low 33ms. This shouldn’t encumber your gaming skills in any significant way. 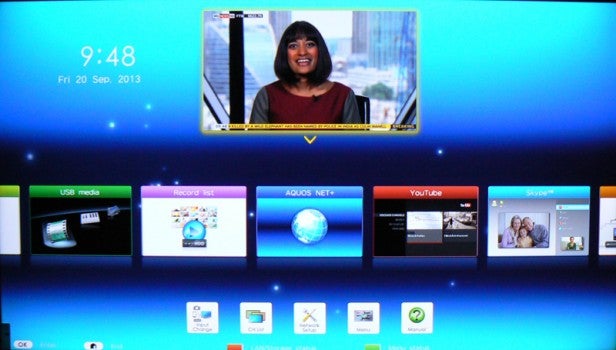 Sharp’s interface for the 90LE757 warrants a mention too. On the upside Sharp lets you still watch a full (though reduced in size) TV picture while you’re using its menus. On the downside this limits the space in which those menus can appear, leading to some fiddly navigational issues.

It also has to be said that the rather low presentation values of Sharp’s main and Smart menus is left looking rather exposed by the vastness of the 90LE757’s screen.

Cleary an £11,000, 90-inch TV is not for the faint hearted, or the financially and/or spatially challenged. There’s also an argument to be made that the sort of rich people able to stump up so much money for a TV may think nothing of stumping up thousands of pounds more to get a king-sized 4K screen.

However, so far as we’re concerned the £5000 you’d save by choosing a 90LE757 over the nearest king-sized UHD TV is a comfortably large enough sum to put Sharp’s monster screen in a new category all of its own. And if you’re a serious home cinema fan for whom projection isn’t practical and for whom stepping up from big to mega bucks isn’t possible, this new category is seriously tempting.

What the 90LE757 lacks in feature and design terms it makes up for surprisingly well when it comes to good old-fashioned picture quality. And the experience of being able to watch truly enormous and good quality pictures from the comfort of your own home without having to remortgage your house is one we can’t help but find seriously seductive.