As well as the GSP 300s, you can now also buy the limited edition Need for Speed Payback Edition GSP 303 headset, sporting a custom NFS decal and colours.

The headset carries the same gorgeous look and feel of the GSP 300s, with some additional design tweaks. 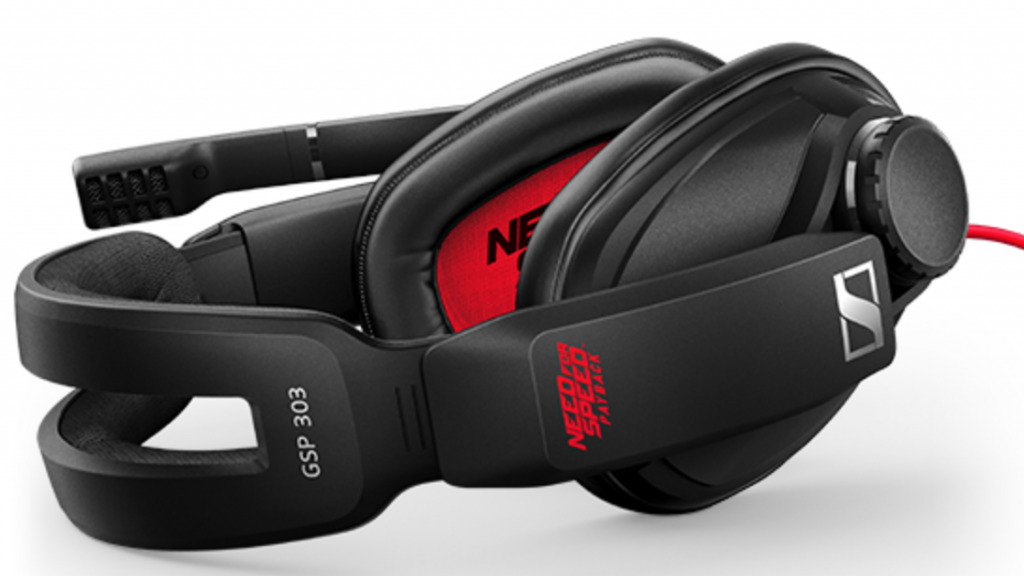 You can read our full review of the GSP 300 headset below.

What is the Sennheiser GSP 300?

The GSP 300 is Sennheiser’s headset for gamers who want a versatile product that’s suitable for music, gaming and chat. It combines a highly respectable build with solid audio quality, but remains lightweight and comfortable over long periods of time.

While the lack of any form of virtual surround sound may put off some buyers, those wanting simplicity will find that the GSP 300 offers a thoroughly rounded performance at a very reasonable price. 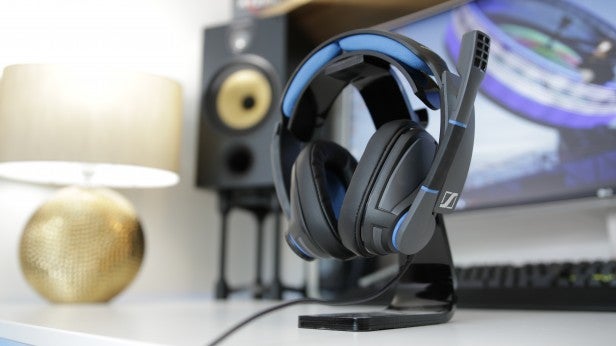 The GSP 300 is a somewhat compact pair of cans, with a relatively small footprint whenever the microphone is not in use. The headset adopts a two-tone design, with blue accents complementing the grey body colour. It’s a great looking bit of kit, and while its plastic build isn’t the most luxurious on the market, it feels well constructed and is likely to forgive a bit of rough and tumble.

The upper section takes cloth as the covering of choice, with plenty of padding allowing for a snug fit that doesn’t force itself upon your head. The level of clamping force has also been handled well, as the GSP grips your head tightly – but never excessively. The result is a headset that pleasingly cozies up to your ears in a rather relaxing manner. 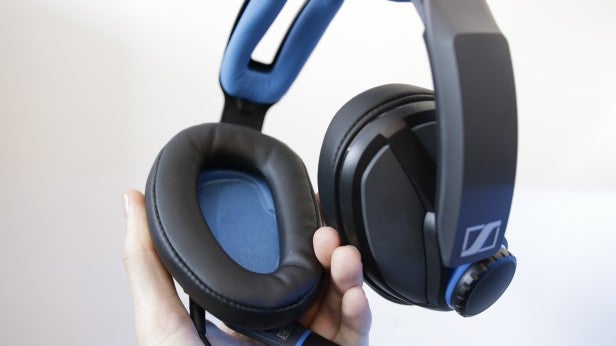 The earcups themselves are oval in shape, allowing for my ears to nestle comfortably inside. The sizing is good, though the material choice may not to be everyone’s taste. It’s a leatherette finish – a popular choice among headset manufacturers. It feels pleasing against the head, but it does have the tendency to get a little hot and sweaty during long gaming sessions. If Sennheiser had provided an additional set of fabric earcups, it would have added another string to the GSP 300’s bow.

The left side of the headset houses the large boom microphone. Unfortunately it’s non-detachable, which does limits its versatility, but it’s not a huge deal. Move across to the right-hand side, and you’ll discover the large volume wheel. It’s dead easy to use, and allows for pinpoint control. I can’t stress enough how annoying tiny headset dials and knobs can be, so it’s a really refreshing change to find such an elegant and practical solution here.

Connecting the headset is easy. PC users will likely wish to utilise both of the 3.5mm jacks, while console users will want to use the supplied adapter to create a single 4-pole 3.5mm jack. This then connects directly into the controller on your Xbox One or Playstation 4. Console users may find that the non-removable 2m cable is a little too long, however. 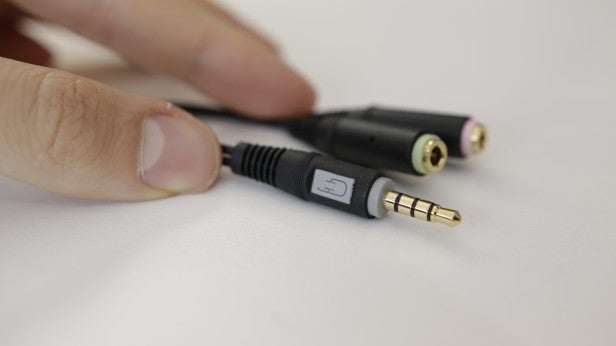 Sound quality can be a little hit and miss in this price range, but thankfully the GSP 300 delivers in all scenarios. After listening to Spotify for roughly 10 hours, I’ve been impressed with nearly everything I’ve heard. There’s plenty of detail in vocals, and a smooth richness to the overall sound. The low end isn’t the strongest around, but an overpowering bass isn’t something that I’m personally looking for in my audio.

If I were to criticise, it would be that that higher notes are not controlled as well as I’d like, and can come across a tad sharp. The GSP 300 also doesn’t compare particularly well to Sennheiser’s own Momentum headphones, which can be found for a similar price. I can’t really complain though, as I’m sure that most will be rather pleased with the sound here, with a stronger performance than the more expensive Logitech G433.

Gaming is also an area of strength for the GSP. While the 300 lacks any form of surround audio smarts, the clarity and warmth of the sound make it highly versatile, and suitable for most genres. For my testing, I opted to play through multiplayer games of Battlefield 1, and survive the alien onslaught in Bethesda’s Prey.

In Battlefield, the audio was full of punch, with plenty of heft behind every explosion and gunshot. While my awareness could well have benefitted from an implementation of 7.1 surround, the soundstage felt wide enough, and I never felt at a disadvantage. Story-focused games like Prey can rely on their soundtrack to truly communicate the emotion of the scene, and I’m happy to report that it was a pleasure to use the GSP 300. 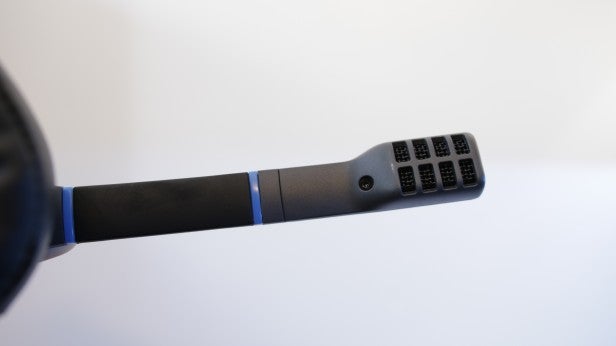 The microphone sounds clear and crisp, picking up vocals without any real distortion. It does have a slight nasally element to it, but it’s nothing to be overly concerned about. As this is an analogue set, the quality will vary massively from device to device, with those connecting into their PC front panel likely to experience static pick up. Switching to a USB sound card eliminated this problem for me, so those with weaker audio set-ups may want to consider the more expensive GSP 350, which uses a USB connection.

Should I buy the Sennheiser GSP 300?

The Sennheiser GSP 300 is a solid headset that proves you don’t need to spend an excessive amount to get a flexible set of gaming cans. The sound quality is strong, the price is reasonable, and the build quality is good enough to eliminate concerns of accidental damage. The two-year warranty certainly helps too.

The lack of a user-detachable microphone is perhaps my biggest gripe and if I were to be picky, I’d ask for a spare set of cloth earcups and a more controlled audio at the higher end. But for for the money, you get great performance and comfort in an easy to use package. Bravo. 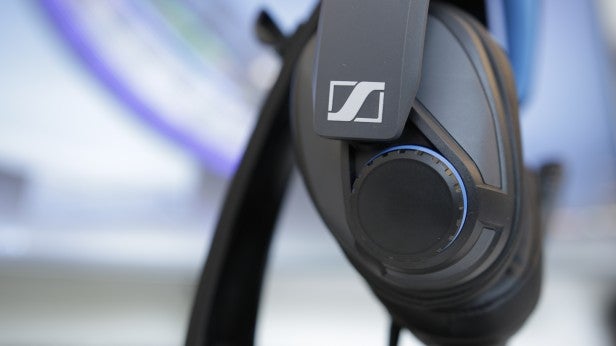 An excellently designed headset that has all the bases covered.