Available on Xbox One (version tested) and PC

Sea of Thieves is about stories. It’s the story of how a lonely pirate took to the high seas without a crew, searching for buried treasure on a nearby island, but who scuttled their ship on the unexpectedly rocky approach. Undeterred, they found the trove they were searching for and attempted to swim back to the traders’ outpost they’d departed from, carrying their haul through turbulent seas, only to be tragically devoured by sharks just short of safety’s shore.

It’s also the story of a bawdy pirate who teamed up with marauding mates to terrorise the high seas in a mighty galleon, but found they were more of a comedy cruise than a scourge of the seven seas. They soon abandoned their ambitions of nautical infamy, preferring to imbibe huge amounts of grog and drunkenly play musical instruments on an abandoned isle.

It’s the story of the crew who tackled a fortress populated by undead skeletons, just about living to tell the tale; of the sailor who retrieved the skull of a greedy undead king, delivering it to a mysterious seer; of the pirate who travelled to the Ferry of the Damned upon death yet returned to the land of the living.

All these tales have one thing in common – they’re all my stories. 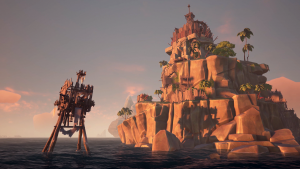 In Sea of Thieves, Rare has created an ecosystem for emergent storytelling and dynamic gaming that’s hard to find elsewhere. Whether playing alone or with friends, the variety of experiences you’ll be exposed to feels boundless, and how you choose to interact with the situations and scenarios you find yourself in can drastically affect how those adventures pan out.

Because of this focus on self-made narrative, there’s no formal story to follow. You’ll start out by picking up voyages from one of three Trading Companies – think guilds – each specialising in a certain flavour of quest. The Gold Hoarders mostly offer ‘X Marks the Spot’ treasure hunts, the Order of Souls sends you out to battle revenant skeletal crews of long-dead pirates, while the Merchant Alliance wants you to help build an economic empire, mostly by capturing and shipping around livestock.

You’re free to follow any faction as much or as little as you like, and building your reputation with each forms the game’s level system, unlocking more challenging commissions and increasingly elaborate equipment as you do so. Rather brilliantly, while there’s a level restriction to buy certain quests, there’s no such cap on who you take with you. Any crew member can suggest a voyage during a meeting in their ship’s hold, meaning a high-ranking pirate can drop a rare quest and take complete beginners with them. Rewards are shared equally at the end, so it’s a nice way to help give a young buccaneer a peg-leg up.

Structurally, MMOs are the closest comparison to what Sea of Thieves offers, but this pirate epic mercifully lacks the grind-heavy quest system that bogs down that genre. Here, it’s a base of exploration, inventiveness, and experimentation that provides both progression and fun, and the game is far stronger for it. 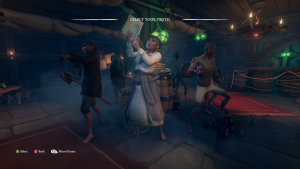 Controls initially seem daunting but you soon realise Rare has packed the game with smart design choices.  A bewildering array of items crammed onto your tool wheel may appear to be unnecessary clutter, but the inclusion of, for instance, musical instruments isn’t just a frivolity – playing music can tame some creatures, helping in Merchant Alliance missions. Every item has a purpose, and figuring out clever applications for them becomes half the appeal.

Incidentally, if you do just want to start playing tunes on your instruments, it can add to the ambience of the game in a rather marvellous way. The more players on a crew who join in on an impromptu performance, the more complex the melodies and sub-harmonies become – a beautiful way to play around with Sea of Thieves’ musical suite.

There’s tonnes of customisation on offer too, from the ‘infinite pirate generator’ that greets you when you first boot up the game, offering a rapid selection of character models, to the plethora of accoutrements you can earn to modify your in-game look. Pleasantly, every item is universal, so expect to see a fair few bearded ladies or bodice-sporting gents on the high seas. Ships are just as open to redesign, but new ship parts are considerably more expensive than costume items, requiring you to take on several challenges before you can pimp your ride.

However, while you absolutely can engage in the world solo, Sea of Thieves is a game that unashamedly incentivises you to play with friends. Even the smaller sloops you’ll take to the ocean in as a single player are tough to manage on your own – between taking the wheel, controlling the pitch and shift of the sails, manning the anchor, and trying to repair any damage you may take, you’ll soon see the benefit in teaming up. 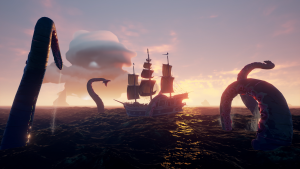 At this point, that’s both a weakness and a strength for the game. It’s so much more engaging to take on this world as part of a crew, but doing so requires far more real-world organisation than just jumping online to play whenever you’re free. There’s no real blind matchmaking system at the moment either, although you can invite anyone you meet in-game to join your crew. It’s a tricky balance – playing with complete randoms can be frustrating if there’s no agreement on what to do or consensus on play style, not to mention the potential for online abuse between strangers, but having to sail solo because no friends are online is a pain.

It’s also worth noting that, at time of writing, some players have encountered problems with Sea of Thieves since the servers went live. Difficulty logging on or certain quest-relevant enemies not spawning seem to be common issues. Personally, beyond occasionally taking a while longer than I’d like to load, it’s been smooth sailing. My positive experience may be in the minority there though, and Rare has acknowledged issues it needs to address going forward. More cautious players may want to wait for teething troubles to be sorted before setting sail themselves.

The completely open nature of Sea of Thieves itself creates another minor problem too, in that it can be hard to engage with emergent content if it doesn’t, well, emerge. Playing solo or with friends, I’ve yet to encounter a kraken, the gigantic sea beast that lurks beneath the waves, or (somewhat miraculously) have a skirmish with any other crews.

Yet it’s knowing that those experiences await, along with tantalising mysteries hinted at throughout the game – I’m convinced there’s something more to the Ferry of the Damned, beyond being a holding ground before respawning after death – that keeps calling me back to the ocean. Rare has created a world that begs to be explored, and thoroughly rewards players when they give into that siren’s song. 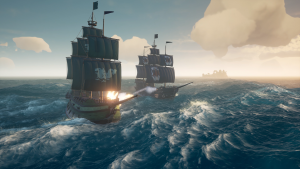 With Rare having spent the majority of the last decade more closely associated with the Kinect Sports franchise than the whimsical and inventive likes of its earlier years, Sea of Thieves feels like a return to form. It’s packed with the studio’s trademark charm and humour, while providing endless opportunities for adventure.

A touch more accessibility for solo players would be nice, as would more varied matchmaking for crews, but this is a game that’s set to evolve over time. A real treasure.