While the large size of the Sasmung UE65F8000 caused a couple of minor problems with 2D playback, the extra screen inches are nothing but helpful when it comes to 3D. The thing is, 3D images need to dominate as much of your field of vision as possible for their effect to become properly immersive/involving. And it goes without saying that unless your room is particularly cavernous, a 65-inch screen will occupy more of your field of view than a smaller TV.

This extra size impact is attached to the familiar F8000 3D strengths of outstanding levels of brightness by active 3D standards; impressively little crosstalk ghosting noise by active 3D standards; and truly HD levels of detailing – the thing the active 3D format was created for. In fact, the sense of detail in the picture – and its freedom from the rival passive 3D system’s visible line structure and jagged edge flaws – is even more mouthwateringly apparent on this vast 65-inch screen than it is on the 55-inch UE55F8000.

Samsung still hasn’t totally mastered the art of getting brilliant sonics out of its super-skinny TVs – though to be fair, it has certainly improved things with the F8000 series by adding more depth to the set where the speakers sit, and introducing a four-speaker array comprising two main drivers and two subwoofers.

This configuration is enough to make voices stay clear and convincing during action scenes, and also allows you to hit pretty prodigious volume levels before distortion creeps into the mix. Bass levels are more pronounced than they have been on previous Samsung flat TV generations too. Still, though, the soundstage can sound a little flat and compressed versus the best audio performers this year when the going gets tough.

As many hours of GTA 5 can attest, the Samsung UE65F8000 makes one hell of a gaming monitor. Partly because of its good motion handling and excellent contrast/sharpness/colour performance, but also because we measured its input lag when using its Game setting at just 38ms – low enough not to introduce enough delay into the imaging ‘chain’ to seriously reduce your skills.

Elsewhere, the Samsung UE65F8000 ships two remotes, including one with a built-in touch pad and streamlined button count. This touchpad remote is far more useful than many we’ve seen, and quickly became our default remote for using with the TV.

Less impressive is Samsung’s smart device support. You can if you work hard enough achieve strong interactivity between the TV and your iOS or Android devices, but Samsung hasn’t unified its TV features into one single app like some rival brands – most notably Panasonic. Instead you have to use at least three different apps to get the maximum smart TV benefit, and you’re given no help by the TV or its instructions manual when it comes to tracking the relevant apps down. 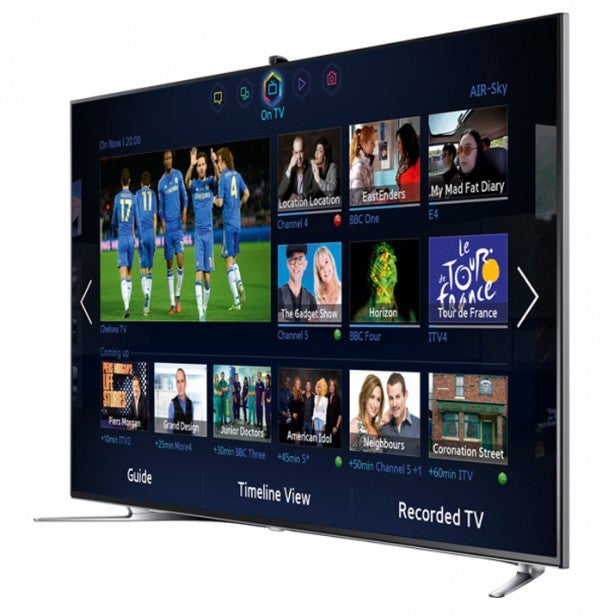 If money’s no object, then obviously it’s got to be tempting to consider buying a 4K/UHD 65-inch TV instead: the Sony KDL-65X9005A or the Samsung UE65F9000 (review coming soon).

Assuming the extra couple of thousand pounds – minimum – required for these 4K/UHD masterpieces is a big deal to you, though, the Samsung UE65F8000 is an enormously attractive proposition with its winning combination of brilliant 2D and 3D pictures, remarkably slim design and monster feature count.

The only serious rivals to consider would be the brilliantly cinematic but slightly more expensive Panasonic P65VT65 plasma TV, and the sublime Sony 55W905A – though obviously the latter model requires you to sacrifice the not insignificant matter of 10 inches of screen size!

Basically the Samsung UE65F8000 gives you all of Samsung’s top-end 2013 LCD picture quality on a bigger scale than we’ve seen it before. Which is pretty much all the incentive required to try and rustle up the £2,650 Asking price.