So the big question for Sony’s TVs in 2013 is simply this: how do you follow 2012’s multi-award winning Sony Bravia HX853 series? One answer is to go 4K, as Sony will in just a couple of months time with the eagerly awaited launch of its new 55-inch and 65-inch X900 models.

Another more mainstream option, though, is to do what the W905A series (as represented here be the 55-inch Sony Bravia KDL-55W905A) does: introduce a new technology that has the potential to take LCD picture quality to places it has never been before.

We’ll get onto that new technology in a moment, but first thing you notice when you pop the Sony Bravia KDL-55W905A out of its box is that Sony has finally jumped fully aboard
the ‘super slim’ bandwagon. The frame round the screen is only just more then one centimetre wide – its slimness exaggerated by the set’s angular
aesthetic. Plus Sony has got its catwalk mojo on by introducing a sliver of quartz crystal in the TV’s top edge,
angled so that it catches the light with a distinctive bluish hue.

Also
notable is the surprisingly small and glinting silver
circular desk mount, and an intriguing mirror-finished little rectangle
hanging from the centre of the screen’s bottom edge. As well as looking
hip, it houses some of the TV’s key electronics,
and also adjusts the colour it emits from its bottom side according to
what input or what feature you’re using.

In summation, it’s a stunning looking TV that would look great in any living room.

But let’s back to that new technology. Sony calls this new tech Triluminos – as named by Sony’s People Who Come Up With Fancy Names For Stuff team. And despite its ‘groovy’ name, its aim is simple: to widen the colour gamut beyond ordinary TVs so that colours are richer, more intense and more nuanced than ever before. It doesn’t aim low. 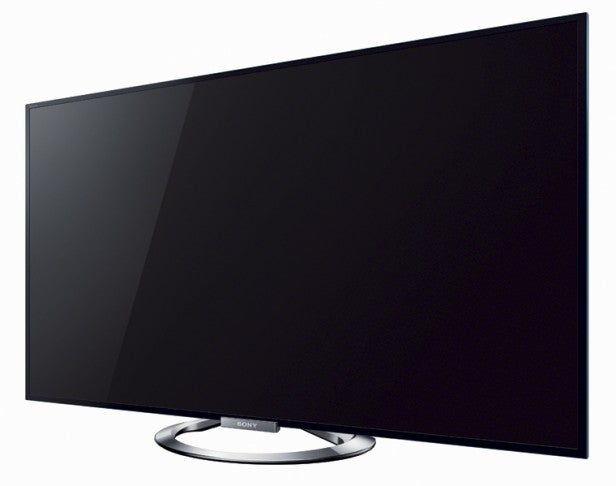 Triluminos works by applying colour filters directly to the LEDs ranged around the screen’s edge – a procedure that should counter LCD’s usual tendency to exaggerate blue tones, as well as expanding the colour gamut along the lines we’ve already described. The only potential downside to the feature is that, since it’s a hardware creation, if you don’t like it, you can’t turn it off…

Triluminos is the most attention-grabbing of the W9 series’ new
features, but it’s certainly not the only important one. Another is the
set’s use of Sony’s latest X-Reality Pro picture processing system. It reduces the number of processing chips it uses from three to two for
enhanced efficiency and cheaper production, and it improves still
further the effectiveness of the unique ‘database’ approach that’s
served it so well on previous TVs.

This database system lets X-Reality Pro improve the speed, accuracy and overall effectiveness of its video processing. It matches pixels patterns in what you’re watching against a huge library of previously identified pixel patterns, providing a shorthand way for the TV to arrive at the optimum settings for any type of source it encounters.

Without X-Reality, Sony’s processing would have to try to calculate the best response to incoming content from scratch and on the hoof, making it less likely to deliver such – hopefully! – accurate and satisfying results.

Mercifully, Sony has dispensed with its increasingly tortuous Xrossbar Media onscreen menus in favour of a combination of a ‘Smart Hub’ (accessed via the Sony Entertainment Network button on Sony’s latest remote controls) and a graphically rich setup menu GUI. We were pleased to note, too, that the menus run appreciably faster than those of last year’s smart TVs, making the whole experience feel much slicker.

It’s a shame, though, that the Sony Entertainment Network (SEN) lacks structure. It’s just a long, 21-row deep, list of icons with no means of filtering apps by type or even changing their running order. Bizarrely, you can establish a vaguely customised running order, but only if you access the SEN via the main TV menu rather than the smart hub! It doesn’t scream of clear thinking. 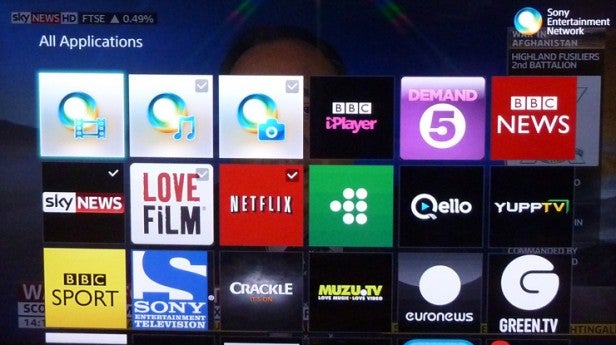 Despite the rather cumbersome nature of the main SEN menu, the Sony Bravia KDL-55W905A does have a trio of rather cool tricks up its sleeves. First there’s a new and decently sophisticated control and content-sharing ‘TV SideView’ app for iOS and Android; second, a ‘Fast Zapp’ menu that lets you quickly and simply skim through TV channel, radio station and even video on demand content listings while still watching a reduced version of the TV picture; and third, an extra remote control with NFC (Near Field Communication) enabling simple ‘touch and screen mirror’ compatibility with NFC-enabled mobile devices.

And should you rather view content stored on a USB flash drive or other device, USB streaming and DLNA network streaming are present, too.

Used as the main TV for the review period
Tested for more than a week
Tested using industry calibrated tools, discs and with real world use
Tested with broadcast content (HD/SD), video streams and demo discs
Next
Picture Settings & Picture Quality Review