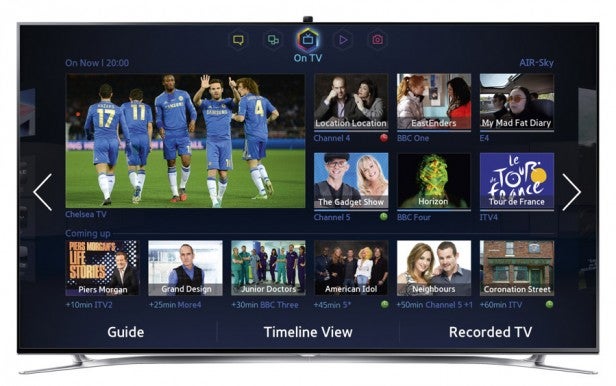 The Samsung UE65F8000 represents arguably the pinnacle of Samsung’s TV design capabilities. The way an incredibly slim bezel – barely 1cm across – manages to support a screen as enormous as 65 inches seems to challenge the laws of science – as well, of course, as leaving your eyes free to gobble up the immense pictures without being distracted by the technology that’s producing them.

Also impressive given the TV’s all-round slimness is the fact Samsung has been able to build a pop-up camera in its top edge.

There is a problem with the design, though. While the full width arced-back stand looks stunning, it only supports the TV at its left and right extremities – the only bits that curve out in front of the screen. So unless you’re standing the TV on a piece of furniture that’s at least as wide as the TV, you’ll find the whole screen topples forward and smashes onto the floor. Something to bear in mind, then!

The Samsung UE65F8000’s connectivity is prodigious. For video you’re looking predominantly at four HDMIs, all built to the v1.4 3D-capable standard, while multimedia talents come from three USBs and both LAN and Wi-Fi network connections.

The USBs can play back all manner of photo, music and video files, with the same files also accessible from networked DLNA PCs. Or you can use the USBs for timeshifting from built-in Freeview HD and Freesat HD tuners.

The main attraction of the UE65F8000’s network connectivity, though, is the way it gives you access to Samsung’s Smart TV online platform. This remarkably content-rich and feature-laden online service has set the bar for smart TV in 2013 (though it’s closely pursued by LG’s Smart TV platform).

Highlights of Samsung’s Smart TV offering include uniquely all of the key UK channel catch up services (BBC iPlayer, ITV Player, Demand 5 and 4oD) together with Sky News and big subscription/PPV big-hitters like Netflix, LoveFilm, Blinkbox, KnowHow Movies and even an app providing access to the brand new BFI Player service. 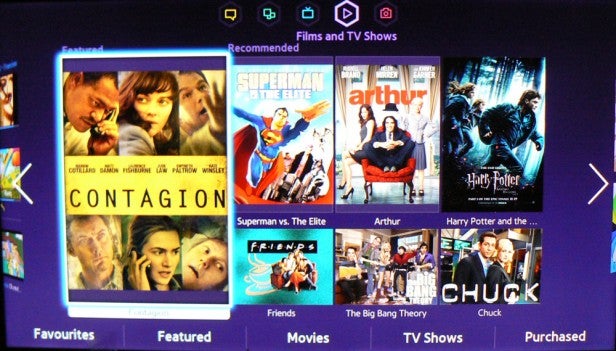 The UE65F8000 also offers the most fully realised voice and gesture control systems in the TV world, as well as an impressive recommendations system that suggests content based on an analysis of your viewing history. Indeed, there’s so much to see we recommend taking a look at our in-depth Samsung Smart TV review for a more detailed look at all the features.

The Samsung UE65F8000 features the premium level of Samsung’s full HD LCD panel technology. The panel itself is a new high-contrast design, sporting the top grade of Samsung’s Micro Dimming technology. Dubbed Micro Dimming Ultimate, this system breaks the image down into small parts – more small parts than is the case with Samsung’s F7000 step-down series – for more accurate analysis when calculating the optimum picture settings for a particular frame of image content.

The Samsung UE65F8000 also benefits from Samsung’s top-level motion processing, which combines a native 200Hz panel with backlight scanning and frame interpolation to produce a 1000Hz effect (or 1000 Clear Motion Rate to use Samsung’s terminology).

The UE65F8000 packs a huge collection of picture adjustment tools, making it possible to get pictures looking pretty much any way you want them to look – including extremely well matched to the Rec 709 industry video standard. The set isn’t endorsed by the Imaging Science Foundation (ISF), but it surely would have been had Samsung bothered to seek such an endorsement.

There’s a fairly steep learning curve when you first get the UE65F8000 if you want to get the most from its features, and Samsung doesn’t always do enough with its operating system to help guide you through it. Switching between different users, for instance, could be more straightforward, and having to set up a dedicated Samsung account is a rather tedious process.

You thus need to commit much more time to setting the TV up than normal, including, we’d recommend, taking the time to watch the tutorials Samsung provides for its gesture and voice control options. Once you’ve got to grips with these alternative control/input options, they’re now potentially quite useful following some thoughtful updates over recent months. 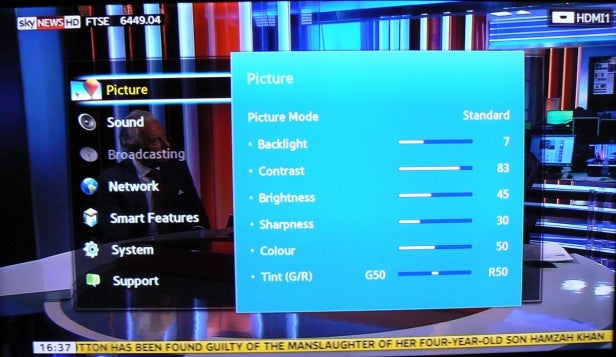 Samsung is starting to get cleverer with its picture presets, but we still maintain that the out-of-the-box settings – even the Movie one – are too aggressive with either their backlight or the contrast levels. Or both.

For watching films with the lights down/curtains drawn, we’d recommend drastically reducing the backlight setting to around its 6 or 7 level of the backlight setting, as it’s at this point that you get the deepest, most natural black colours without the brighter parts of dark images starting to look dull and lifeless.

We’d recommend, too, reducing the set’s sharpness level with Blu-rays, as the default 50 value can leave images looking unduly gritty with forced edging.

Also, make sure you’ve got the TV’s Cinema Black feature active, as this fixes the backlight level for the areas of the picture that correspond with the black bars above and below ultra-wide aspect ratio pictures, meaning you aren’t as distracted by the machinations of the UE65F8000’s dynamic contrast system as you are with ‘normal’ edge LED TV setups.

Final suggestions are that you turn off all NR circuitry for HD viewing, and only use the motion processing option on its Clear setting, or not at all. Drive it harder and pictures can look too processed.