While the UE55NU7300 looks impressive with bright pictures, the wheels come off when things turn dark

With Samsung’s new 2019 models arriving soon, there are now real bargains to be had on the brand’s 2018 range of TVs. Perhaps the most eye-catching of which is the Samsung UE55NU7300: £579 in January, the 55-inch 4K curved TV boasting Samsung’s Eden smart system can now be picked up for £450.

Frankly, it sounds too good to be true. So we figured we’d better take a look at one.

The big selling point of the UE55NU7300’s design– or not, depending on your taste – is its curved screen. Curved TVs are rare these days; in fact, I think it’s only Samsung that still makes them. They do still have a fan base, though. And I’ve seen many a folk lured towards them in electronics stores like moths to a flame. 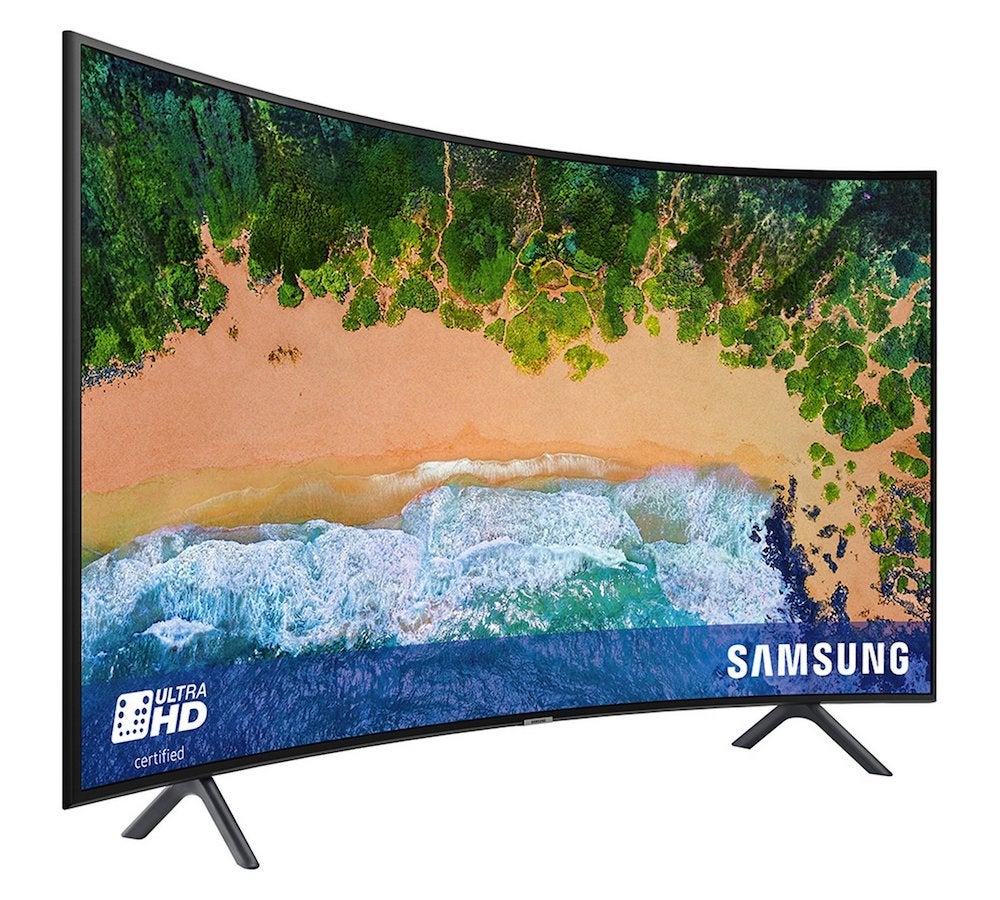 If you’re thinking of wall-hanging a UE55NU7300, bear in mind that its curved edges will protrude further from your wall than a flat TV. Also, while you might like the look of the UE55NU7300, don’t expect its curved screen to improve your viewing experience. Unless, perhaps, you’re going to sit much closer to it than most people would.

The UE55NU7300’s bodywork feels a bit lightweight and plasticky. That’s fair enough for such a cheap TV, and the set’s sculpting and metallic edge trim ensure that it isn’t by any means ugly–

Shipping with the UE55NU7300 is one of Samsung’s standard remote controls. There’s no “smart”, button-lite option of the sort you get with Samsung’s high-end TVs. Even the standard remote is perfectly pleasant to use, however. The sculpting is comfortable, and the button layout logical.

Related: The pros and cons for buying a curved TV 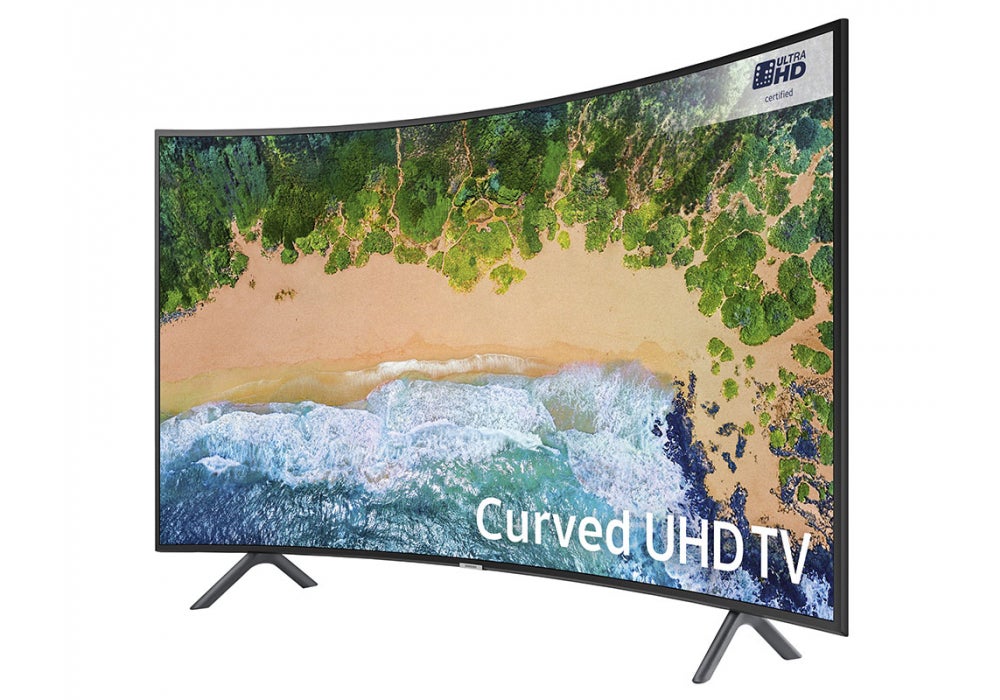 This HDR support won’t be as punchy as it usually is on Samsung TVs, however, since this model delivers a measured brightness of only around 300 nits on a 10% white HDR window. For context, most HDR content is mastered to brightness peaks of at least 1000 nits.

The UE55NU7300 isn’t one of Samsung’s QLED TVs. This means it creates its colours using a traditional LCD TV colour filter system rather than Quantum Dots. As a result, its colour range can’t cover as much of the wide colour gamuts typically associated with HDR sources.

However, all of this is absolutely normal for such an affordable TV. Beside, in many other ways the UE55NU7300 has more to offer than most similarly priced rivals.

For instance, its “Eden” smart platform is very strong. It comprises a huge library of apps and source options, which include 4K and HDR versions of YouTube, Netflix, Amazon Prime Video and Rakuten.

The interface is also clean and slick, and it’s easy to customise the icon layout to suit your preferences.

Related: Everything you need to know about 4K 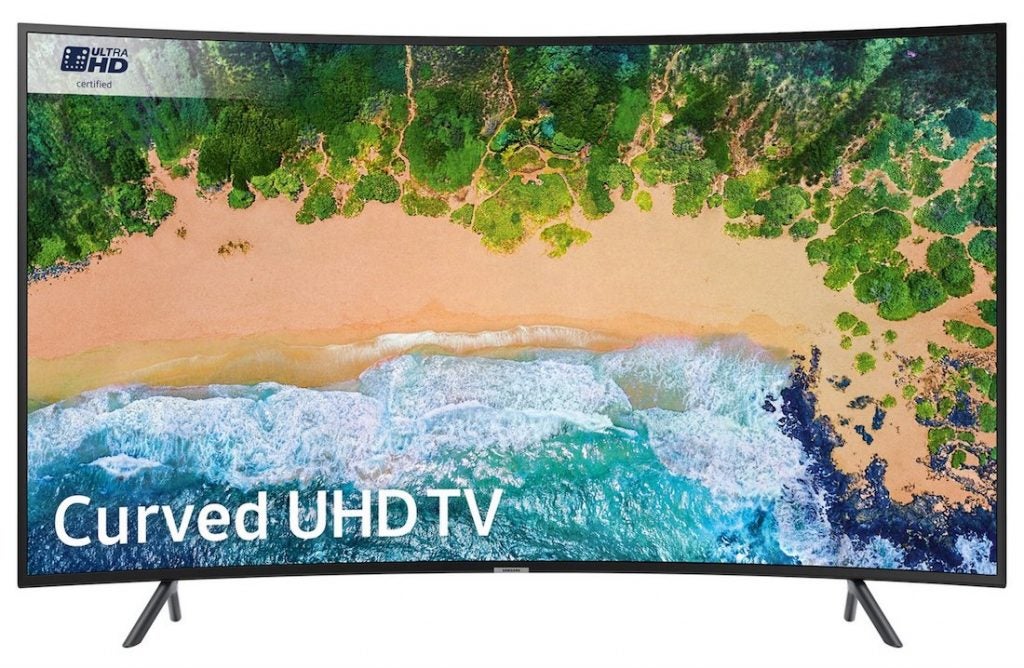 In addition, the UE55NU7300 also has a dynamic contrast system. This adjusts the image’s brightness based on analysis of the image content, and should help its contrast and black level performance. Although it doesn’t appear that you can turn it off – which turns out to be a problem.

Other features include a SDR to HDR conversion system, and some motion processing options – neither of which are givens at this level of the market.

Connections are built into the TV rather than one of Samsung’s One Connect external connection boxes. Highlights include three HDMIs and two USB ports.

You do have to be careful with the Samsung UE55NU7300’s setup to get the best from it.

For starters, to get the best-looking movement, set Auto Motion to Custom, with Judder set to three. Leave the LED Clear Motion setting off; while this makes motion look filmic, it also makes the picture look uncomfortably dark. 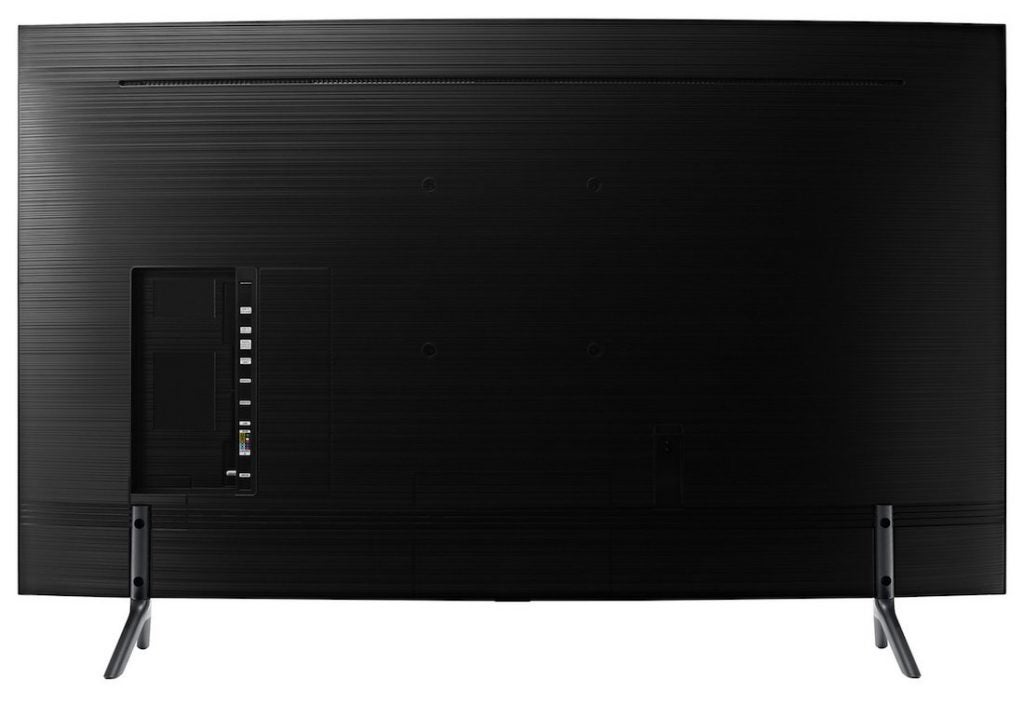 When it comes to the picture presets, only the Movie and Standard modes are worth checking out. Movie provides the most even, consistent backlight, but Standard gives more contrast and dynamism. Personally, I preferred Standard on balance.

Finally, the Contrast Enhancer is a tricky one. Set to High you get by far the most punchy HDR picture. However, this can also make the picture look rather harsh and forced. Low delivers a gentler result that’s arguably better in a dark room. Although you should definitely stick with the High setting in a normal/bright room setting.

In some ways, the UE55NU7300 performs better than similarly priced rivals. Both its 4K and upscaled HD/SD pictures look crisper and more detailed than is usual for this money. This means it sells the jump from HD to 4K content more satisfyingly than most. In addition, the sharpness of the picture holds up well for a budget TV when there’s movement to deal with.

Colours, too, look more nuanced, balanced and consistent than they’d do on a sub-£600 4K TV. In fact, there’s less colour banding with HDR sources than you get on Samsung’s 2018 high-end TVs! 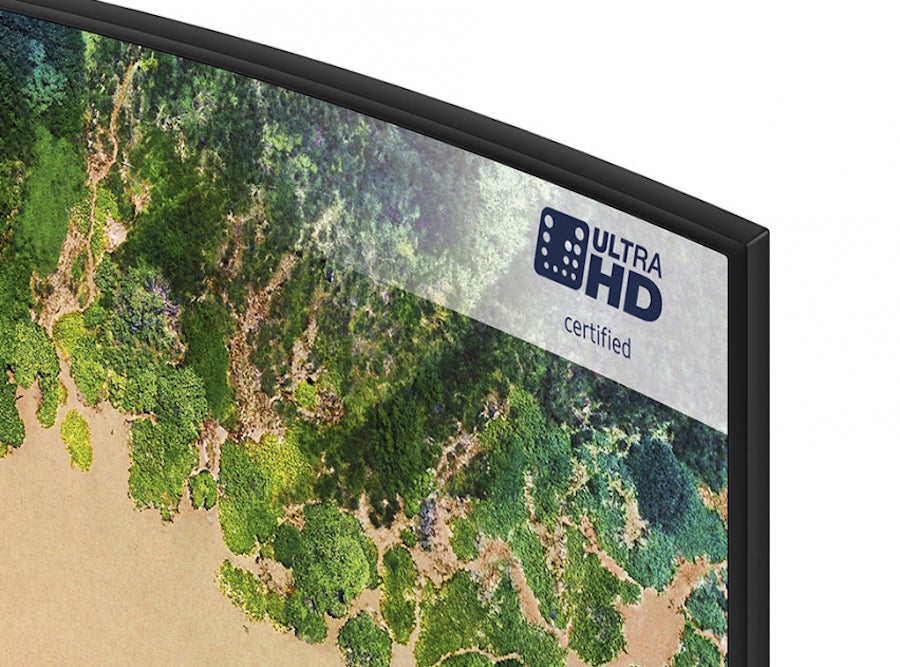 The subtle colour blending and shading holds up better in the brightest parts of HDR pictures than on any other TV I’ve seen at this price. There’s a little clipping (lost detail) in very bright HDR whites due to the screen’s low brightness, but Samsung’s tone mapping is actually better in this respect than that of the vast majority of budget rivals.

Moreover, it achieves this whilst delivering a slightly more impactful step up between SDR and HDR playback than you’d expect from a screen that produces just 300 nits of brightness. So while you don’t get anything like the full impact HDR can deliver, you do at least get some benefit from watching HDR sources.

Actually, on many budget TVs HDR can actually look worse than SDR. But the UE55NU7300’s understanding of how to translate HDR to the abilities of its screen means that HDR does genuinely add to your viewing experience.

The TV looks well above par for its money with SDR content, too. In fact, it’s at its most comfortable with SDR pictures, delivering levels of colour and light subtlety/precision that go beyond most sub-£600 4K TVs.

There’s good news for gamers, too, in the shape of just 12ms of input lag (the time it takes a screen to render images) when using its Game preset. This is pretty much as low – and therefore good – as it gets. 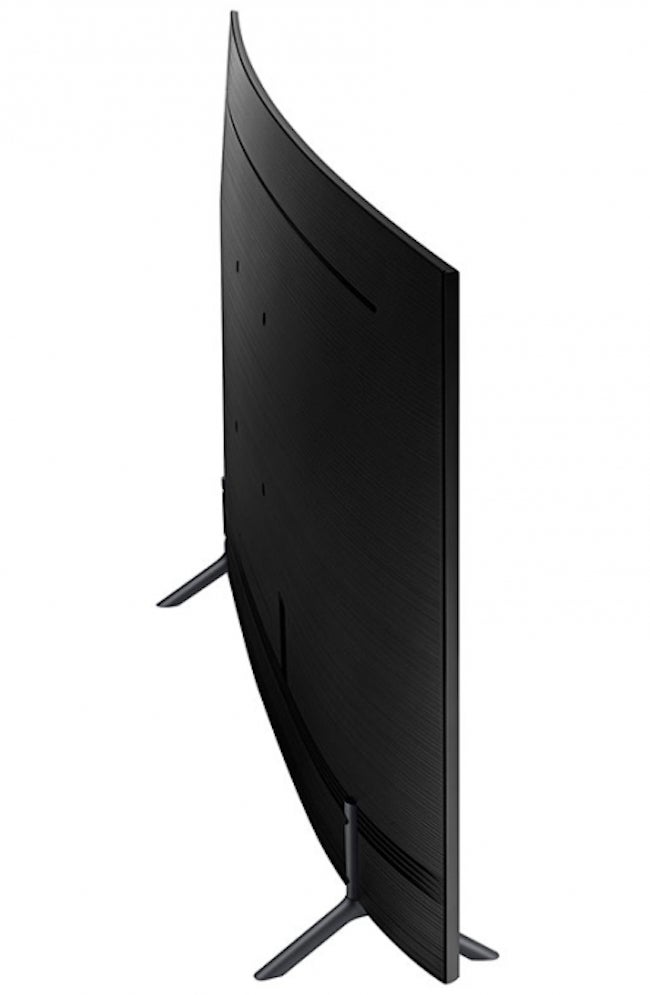 Joining the UE55NU7300’s strong pictures is a surprisingly powerful sound system. Deep bass performance is only fair to middling, but the mid-range is open, clear and capable of ebbing and swelling as a soundtrack requires. Detail levels are good, and there’s neither harshness to trebles nor muddiness to the lower-mid range. Voices sound surprisingly clean and well projected, too, for a TV with no forward-facing speakers.

The main problem with the UE55NU7300 is that it overreaches with its pictures. For starters, while its use of a dynamic backlight system is laudable on one level, the regularity and extent of its backlight adjustments can make dark HDR pictures look pretty unstable. This can distract you from what you’re watching.

Another trying-too-hard issue with the UE55NU7300 is that its push to make the most of what little brightness it has can leave dark scenes looking rather washed out – despite the aggressive efforts of the dynamic backlight system.

The curved screen, meanwhile, has two unfortunate side effects. One is that it can foreshorten the picture if you have to watch from a fairly steep angle. The other is that it can distort on-screen reflections across more of the screen than a flat-screen.

Based on experience of previous generations of Samsung mid-range LED TVs, I’d anticipated that the UE55NU7300 would be a huge bargain. Actually, it hasn’t quite worked out that way.

Certainly, there are aspects of its performance that outperform its price. But its difficulties with handling dark HDR images open the door to cheaper rivals being more watchable overall – even though their pictures might not ever look quite as “HDR”.

Samsung’s mid-range TVs are usually pretty reliable. However, the UE55NU7300 tries so hard to overcome its surprising inherent lack of brightness that with dark scenes, at least, it can become slightly uncomfortable to watch.