The KS7000 series is the cheapest way to get your hands on one of Samsung’s SUHD TVs, which use high-level colour, contrast and brightness technology to deliver a premium HDR picture. In fact, the UE55KS7000 leverages this technology so effectively that it arguably outperforms some of Samsung’s more expensive SUHD sets.

Personally, I think the smart remote is so stripped back that it actually becomes complicated to use with other kit, but it’s certainly a handy alternative for controlling the UE55KS7000. 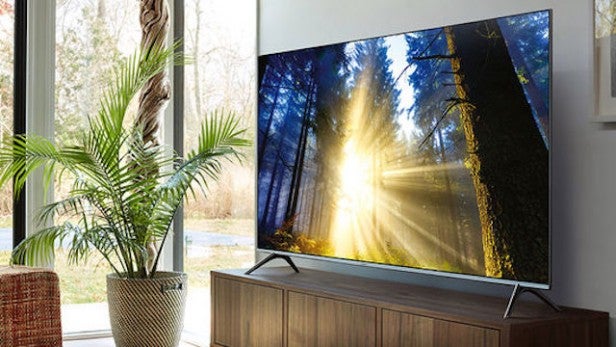 With most Samsung 2016 SUHD TVs I’d usually recommend using the Standard picture preset rather than the default Movie mode for watching HDR. On the UE55KS7000, however, the Movie mode works well. Just ensure the Dynamic Contrast setting is on Medium, and that the TV’s noise reduction systems have been turned off when watching native UHD sources.

I’d also recommend switching the TV’s motion processing to Custom, and setting the judder and blur to level three or four.

Regardless of whether you’re watching HD or UHD, resist the temptation to run the Sharpness setting higher than around 20-25. This can make the image become noisy.

When watching SDR, it’s advisable to reduce the Smart LED local dimming feature to low. As for the backlight, keep that set as low as 10 or 11 in a dark room, and around 14 in a bright room. 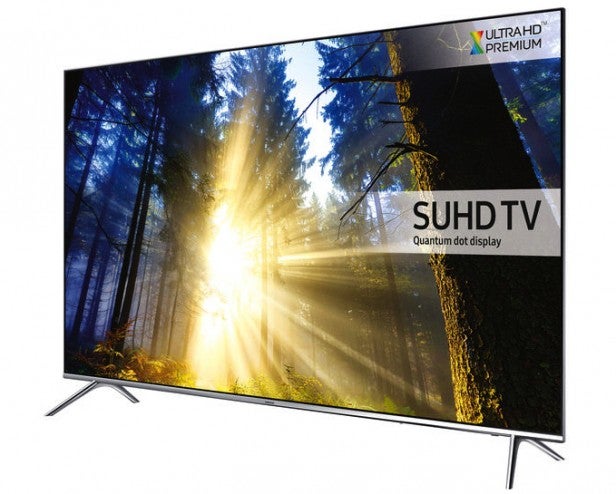 The UE55KS7000 is the only 55-inch TV at this price to meet the Ultra HD Alliance’s “Ultra HD Premium” recommended specifications. This equates to a native UHD resolution, brightness levels beyond 1,000 nits and black levels as low as 0.05 nits. Not to mention 10-bit colour playback and a colour range beyond 90% of the digital cinema world’s DCI-P3 standard.

Quantum-dot technology helps it to hit the colour targets, while its contrast performance is bolstered by a “moth eye” filter. This reduces reflections and local dimming to boost the effectiveness of its edge LED lighting system.

Connections are delivered on an external One Connect box. They include four HDR/4K HDMIs, three USBs and built-in Wi-Fi for accessing Samsung’s online services or multimedia on networked DLNA devices.

The UE55KS7000 marshals content through the second generation of Samsung’s Tizen-based interface. This helpfully introduces a second deck of contextual icons to offer more content shortcuts.

Netflix and Amazon are present in their 4K and HDR implementations, and the BBC iPlayer and ITV Hub are on hand too. You can’t currently access the All 4 or My5 catch-up TV apps. 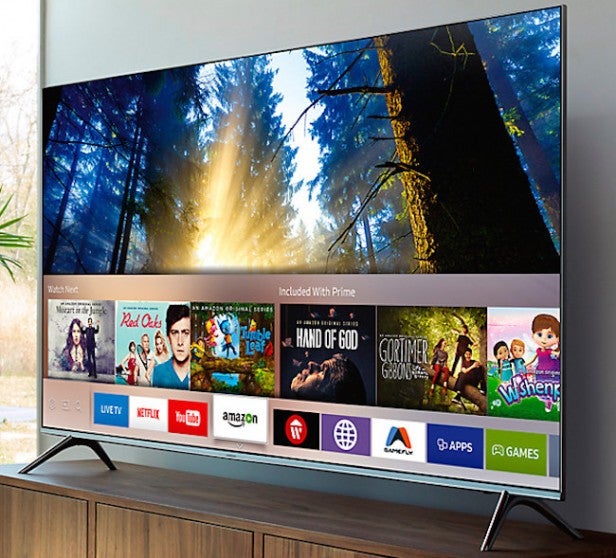 The UE55KS7000 produces more consistent pictures than some of its more expensive siblings, which is actually down to a less sophisticated local dimming system.

When bright objects appear against a dark background during HDR viewing, the TV responds to the extra source brightness by slightly raising overall brightness levels. As a result, you don’t see the distracting vertical bands of light running down the picture that you get on some more expensive models – including the KS9000 series.

This does make dark areas look slightly greyer than they do on Samsung sets with stronger local dimming, but I’d take the more consistent, even backlight of the UE55KS7000 over the distracting light bands on the more expensive edge-lit sets.

While the UE55KS7000 doesn’t reach black levels quite as deep as more expensive SUHD models, its contrast performance remains excellent. Even when dark areas appear alongside very bright ones, blacks still appear deeper than most rivals. It achieves this without losing out on shadow detail or dark colour information too. 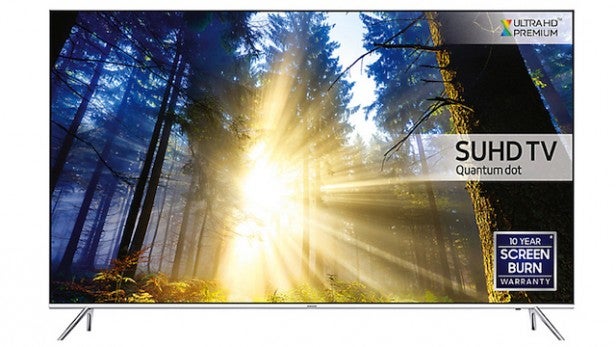 The UE55KS7000’s colours look exceptionally vibrant, while native UHD sources appear more detailed and crisp than on any other similarly affordable TV. Unlike less bright TVs, the detail remains even in the brightest HDR areas.

The set handles motion well, too, with its minimal judder and blur easily managed by motion processing that generates precious few unwanted side effects. In fact, I found movement on the UE55KS7000 cleaner and more convincing than it is on Samsung’s flagship KS9500 series.

The techniques the UE55KS7000 employs to excel with HDR adapt superbly to SDR’s more limited colour, brightness and contrast too. As a result, you’re left with some of the best SDR black levels and colours seen on an LCD TV.

In addition, high-definition sources are upscaled to the screen’s native UHD resolution brilliantly, gaining plenty of detail and sharpness without exaggerating noise. Gamers will be pleased to hear that in its Game picture mode the UE55KS7000 suffers just 24ms of input lag, regardless of whether you’re gaming in SDR or HDR.

Aside from the slightly raised black levels with high-contrast HDR images, the UE55KS7000 has two other picture flaws. First, you don’t have to watch from much of an angle (vertical or horizontal) before contrast takes a significant hit.

Second, there’s sometimes banding in areas of subtle colour blends when watching HDR sources. You can minimise this issue by setting Dynamic Contrast to Medium, but you can’t get remove it completely.

The UE55KS7000’s mostly excellent picture is accompanied by fair to middling audio. The set’s good at reproducing treble details and generally sounds crisp and clean. However, soundstage width and bass are limited, loud trebles can become shrill, and voices sound strained during dense soundtrack moments. 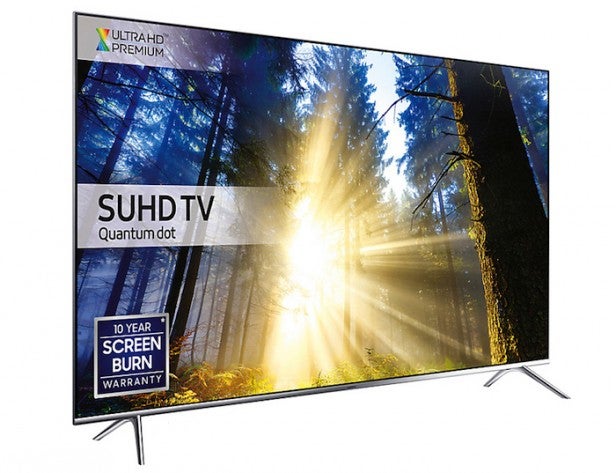 In some ways, the UE55KS7000 is uniquely good for its money – especially if you want maximum high dynamic range and Ultra HD impact.

Some HDR colour banding and a limited viewing angle stop it earning an unbridled recommendation, but most of the time it looks gorgeous.

Worthy rivals are few and far between. The Panasonic TX-58DX802 costs almost the same, offers three more inches of picture, sports a striking easel-style design and delivers beautifully subtle, stable images that only fall short of the UE55KS7000 on brightness.

The 58-inch Panasonic TX-58DX750, meanwhile, is an excellent TV with standard dynamic range, priced at £1,049. It isn’t as bright or contrast-rich with HDR, though.

Despite a limited viewing angle and some HDR colour banding, the UE55KS7000 proves that genuinely premium HDR thrills don’t have to cost a fortune.