Samsung’s debut Ultra HD Blu-ray player, the UBD-K8500, launched last year to great fanfare but found itself in the shadow of the superior Panasonic DMP-UB900. Now the Korean giant is looking to snatch back the 4K crown with the UBD-M9500, a step-up model with a slew of new features and a revamped design.

At £500, it’s far from a budget option – in fact, it’s more expensive than any of Panasonic, Sony and LG’s latest UHD decks – but I’m hoping that price will be justified by a juicy spec and top-drawer 4K pictures. If your budget doesn’t stretch that far, the scaled-back UBD-M9000 is available for £100 less. 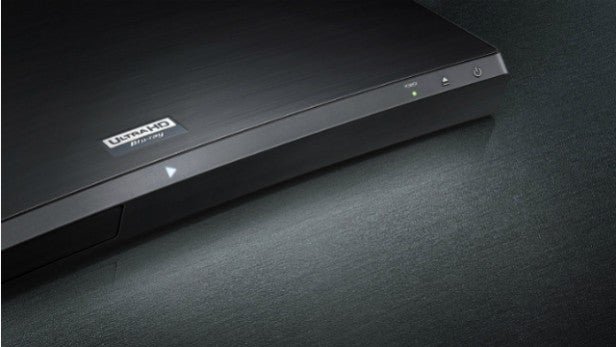 One of my main criticisms of the UBD-K8500 was its lightweight build quality, which compared unfavourably with Panasonic’s more robust players. The UBD-M9500 is slightly improved, but the plastic casing still has the air of a budget player – at this price I’d expect something a little more luxurious.

That said, it’s a devilishly good-looking deck, with chamfered edges and black brush-effect panels. Like the K8500, the bodywork echoes the shape of Samsung’s curved TVs and its relatively slim height (45mm) brings blessed relief in crowded AV racks. 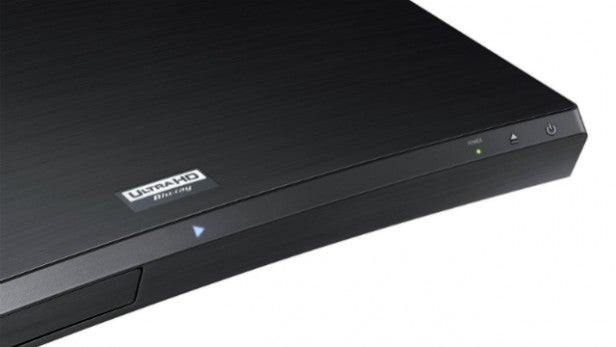 The most welcome cosmetic difference between this and the K8500 is the addition of an OLED display, placed on the sloping front edge. It’s a little too small to read from the sofa, but the helpful status messages remove the guesswork involved when using the K8500.

There are other subtle cosmetic changes – the USB port has been moved from the front to the side and the disc tray logo has been removed – but on the whole it looks similar to the K8500. Running along the front edge are protruding touch-sensitive power and eject buttons, alongside a small power LED. 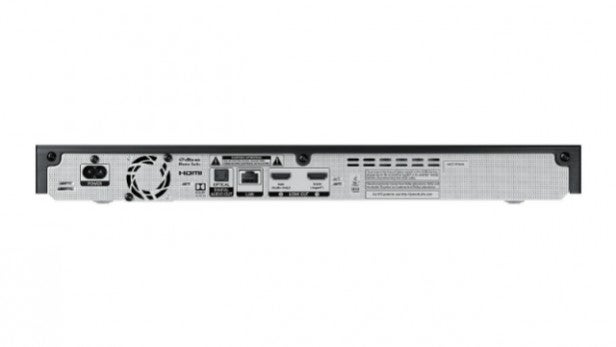 On the back, two HDMI outputs allow you to split the video and audio signals, which is useful if your AV receiver can’t pass through 4K signals. An optical output is also provided, alongside an Ethernet port for wired connection to a router, which is recommended if you plan to do a lot of media streaming.

But if you prize convenience over reliability then there’s built-in Wi-Fi with support for 801.11ac. The side-mounted USB port allows you to play music, video and picture files.

The UBD-M9500 offers a bunch of new tricks, including a nifty Blu-ray to Mobile feature that beams 4K and regular Blu-ray discs to an Android smartphone. So if you’re watching the match on TV but the kids want to watch a movie, chuck them your phone, stream the disc and everyone’s happy. 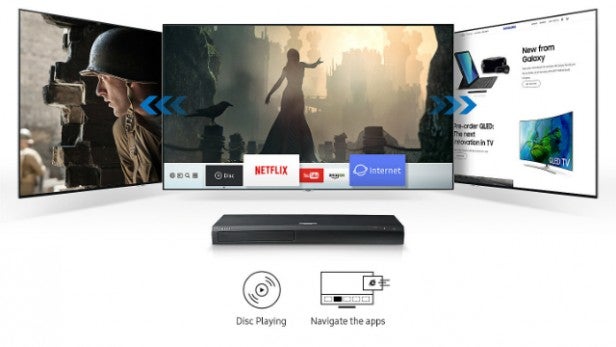 It works with UHD discs and even transmits smart content and overlaid menus. I managed to get it working with a Samsung Galaxy S6. It froze a couple of times, but it’s a nifty little feature.

You can also send phone content in the other direction with Screen Mirroring, or beam music to the player via Bluetooth and turn old-school amps into wireless systems. Another neat Bluetooth trick allows you to beam audio from the player to Bluetooth headphones, something Samsung calls Private Cinema Mode. It’s great if you want to watch a movie late without waking the whole household.

The M9500 also lets you watch content taken on Gear 360 or YouTube 360 videos and control them with the player’s remote. You need to convert Gear 360 content on a Galaxy smartphone or PC first, and watch them via the USB port. 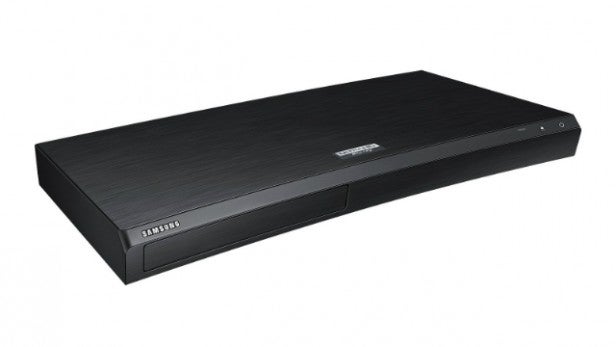 Away from these new-fangled highlights, the M9500 does most of the bread and butter stuff we’ve come to expect of a Blu-ray deck, including playback of UHD and regular Blu-ray, DVDs and CDs. You even get a copy of Planet Earth II on UHD Blu-ray in the box.

However, one thing it won’t do is play 3D Blu-ray discs, which may reflect its dwindling popularity but won’t impress those with a large collection of 3D movies. It doesn’t play SACD or DVD-Audio discs either, both of which are supported by the Sony UBP-X800. 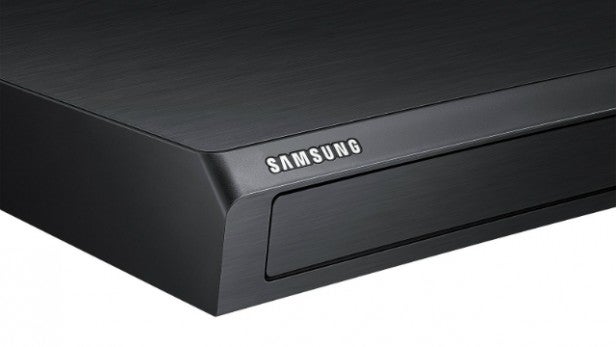 Another significant omission is Dolby Vision, the advanced form of HDR, which uses dynamic metadata to optimise picture quality frame by frame. Samsung says there’s no demand for it, and while that may be the case at present, its absence could be a deal breaker for some as content increases – particularly as LG’s UP970 and the Oppo UDP-203 both support it.

The M9500 offers DLNA media streaming from PCs and NAS drives, including hi-res FLAC, WAV, AAC and AIFF up to 192kHz/24-bit and a comprehensive range of video codecs.

If your appetite for entertainment still isn’t sated by that little lot, the UBD-M9500 lets you access an wide range of online apps – around 300 in total – including Netflix, Amazon Video and YouTube (all with 4K and HDR content) plus Google Play, BBC iPlayer, All 4, My5, Spotify and Deezer. The only major one I couldn’t find was ITV Hub. 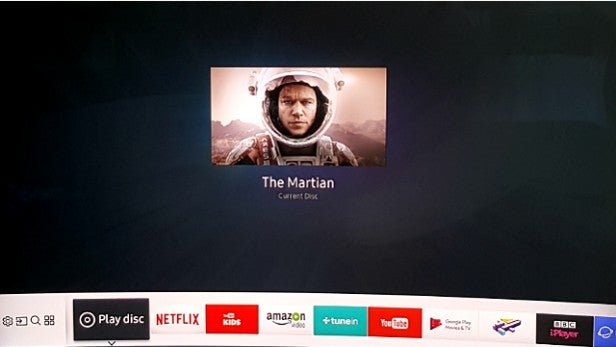 Samsung has wisely switched to the Eden user interface (powered by the Tizen OS) introduced on its 2016 Smart TVs. As a result, the UBD-M9500 is a dream to use, offering greater flexibility and better-looking menus than the UBD-K8500.

The Home menu is a banner at the bottom of the screen, containing a row of tiles. Here you’ll find a selection of downloaded apps – which can be edited – alongside a search tool, source selection, apps and settings. In each case, a second tier displays the relevant options.

It also contains a selection of ‘quick settings’, allowing you to select the audio output format, change menu size and switch picture modes. There are Standard, Movie, Dynamic and User picture settings, the latter allowing you to tweak noise reduction, sharpness and brightness. 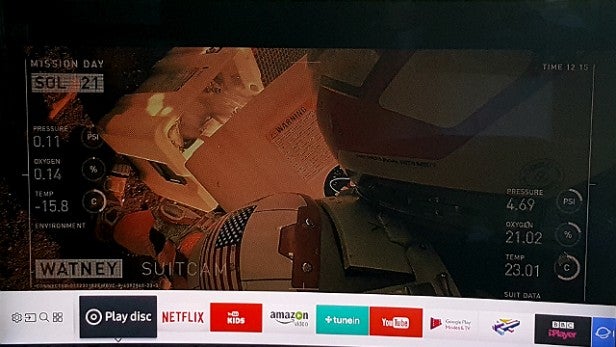 It’s fast, stylish and intuitive. I love the way you can access the Home menu as the movie plays and most apps fire up from the Home menu in less than a second – doing so on the K8500 restarted the disc.

Integration between this player and a Samsung TV is seamless. You can control both using the Smart Remote that ships with Samsung’s latest sets, which makes life remarkably easy. In fact, those with an all-Samsung system can pretty much grab any of the remotes and find the function they want. 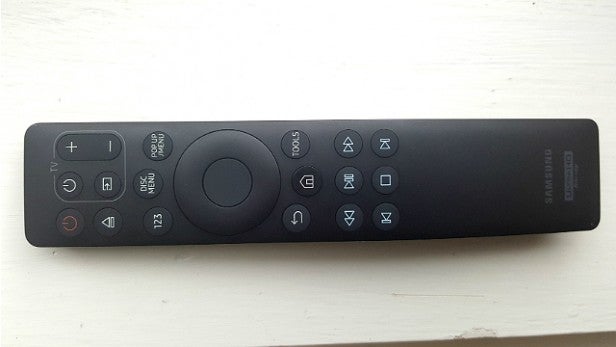 The UBD-M9500’s own remote is another big improvement. The slim, weighty handset sports an arched back that fits comfortably in the palm. The firm buttons are clearly marked and intelligently organised, with a large direction pad making menu navigation a cinch. It may sound trivial but the biggest improvement is the addition of search buttons – on the K8500’s clunky remote you had to hold down the chapter skip keys, which was a pain.

There’s no need to spend ages tinkering with the (admittedly slick ) setup menus, either. Unlike the UBD-K8500, which took at least five menu steps to activate HDR, the M9500 configures itself for HDR content automatically when connected to a Samsung UHD TV.

Similarly, you don’t need to select the ‘Bitstream (Unprocessed)’ audio setting to make the M9500 output Dolby Atmos or DTS:X – it analyses your audio system and selects the correct mode automatically.

The M9500 runs quieter than the K8500, responds quickly and loads UHD Blu-ray discs at impressive speed. Kingsman: The Secret Service and Life of Pi started playing 20 seconds after closing the tray – the same as a regular Blu-ray disc. That’s excellent.

And as a streamer, the M9500 is fast and simple to use. It dived willingly into my packed NAS drive and started playing tracks without hesitation. The Now Playing screen is jazzed up by cover art and a helpful playback queue on the right-hand side of the screen. 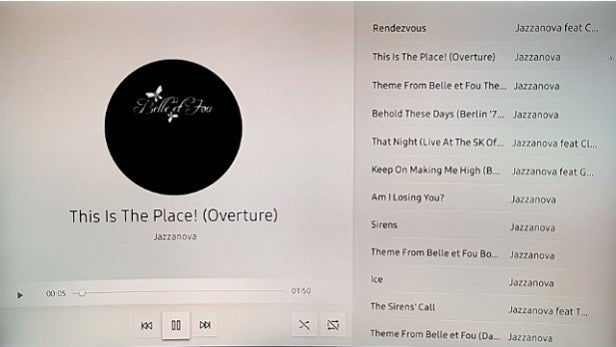 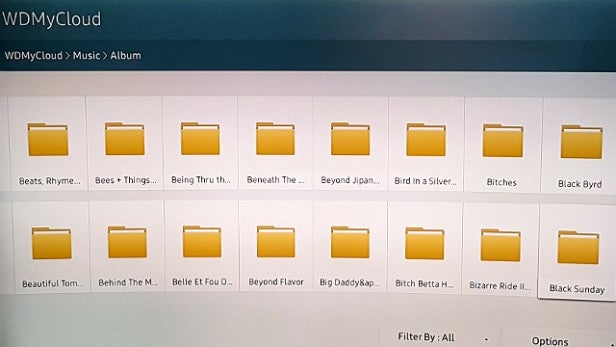 That said, the structure could be improved slightly once you reach your desired album or playlist – the track thumbnails are displayed in a jumbled up order, making them harder to identify than they should be.

The UBD-M9500 serves up sumptuous UHD Blu-ray pictures. Life of Pi explodes from the screen with masses of fine detail and truly life-like colours. Excellent contrast keeps the image rich and punchy as the camera drinks in the epic Indian landscapes.

As the opening credits play over shots of animals, scaly skin and strands of fur are beautifully rendered. You can pick out individual leaves in trees and the muddy textures of the hippo enclosure. The definition is stunning. 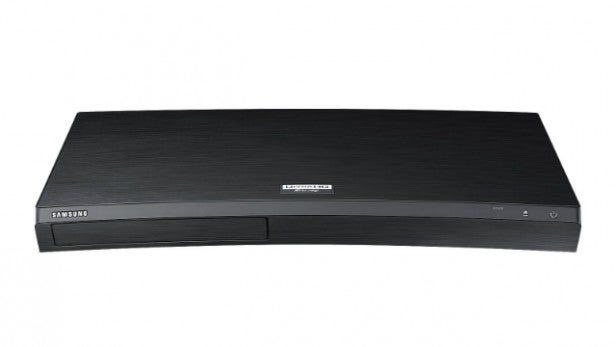 The HDR-enhanced colours aren’t only dazzling but also finely nuanced and smoothly gradated. Skin tones look natural and shades of green are less garish than the regular Blu-ray. Clarity and colour purity are top drawer – I can’t make out any banding, block noise or other artefacts.

I compared the M9500’s pictures to those of the K8500 and there doesn’t appear to be a major step-up in image quality with UHD discs. Thankfully, there are enough feature upgrades elsewhere to justify the higher price.

The UBD-M9500 also renders regular Blu-ray discs with a sure hand, making the detailed landscapes in The Martian look remarkably sharp and focused. Here I could see a slight improvement over last year’s model – the M9500’s images looked slightly sharper and more composed. It also streams hi-definition video content like a champ, offering crisp, solid pictures with no buffering problems over Wi-Fi. 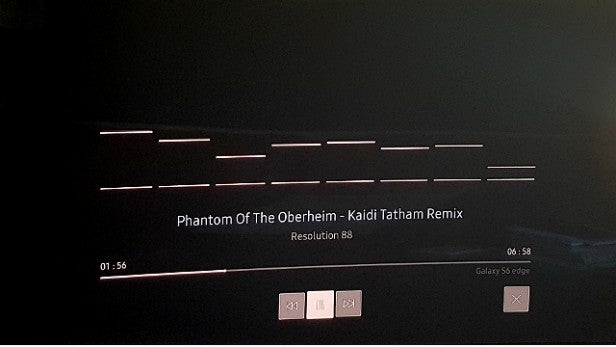 Audio-wise, the digital-only output means sound quality is determined by the quality of your system, but streaming Bluetooth through the player from a Samsung Galaxy phone proved a novel and convenient feature. A Now Playing screen appears when the music plays, showing the relevant metadata and an animated EQ meter. 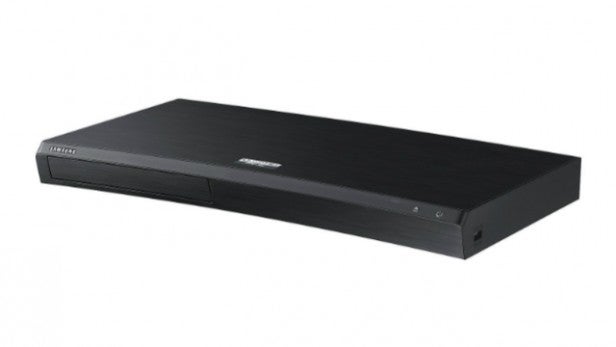 In terms of picture performance the UBD-M9500 serves up dazzling images, packed with detail and swimming in gorgeous deep, natural colours. The benefits of UHD Blu-ray have rarely been clearer.

On the downside, its below-par build should be better for the money, while a lack of support for 3D Blu-ray and Dolby Vision are disappointing for such an expensive player. The absence of Dolby Vision isn’t a huge deal right now but will become an issue as the market grows, while the lack of 3D will annoy those with big collections of stereoscopic content.

But if you can live with those omissions, the UBD-M9500 is well worth considering. It’s a slick and sophisticated UHD Blu-ray player that brings out the best in the nascent 4K format.

Samsung’s next-gen UHD Blu-ray deck improves on its predecessor with a beefed-up feature list, a slick new operating system and stunning 4K pictures. Build quality could be better, however, and it lacks features found on rival players.