What is the Panasonic DMP-UB900?

The UB900 is essentially the posh half of Ultra HD Blu-ray’s UK launch. Ultra HD Blu-ray, for those new to all this, is the next-generation of Blu-ray that supports 4K and High Dynamic Range (HDR) – a new standard for colour and picture brightness and promises a whole new dimension of colour and contrast.

The UB900 costs £600 versus £429 for the Samsung UBD-K8500 deck, and sports a number of premium audio and video features which Panasonic reckons will enable it to unlock UHD Blu-ray’s full potential.

That’s a pretty bold claim. So has Panasonic really got it right first time? That’ll be a yes. Read on to find out why.

Video: Trusted Explains – Everything you need to know about 4K and HDR

The UB900 sets a suitably premium tone right from the off, thanks to an eye-catchingly glamorous design and impressive build quality. The top plate has an appealing brushed metallic finish, while the fascia is fronted by a drop-down smoked-glass-effect cover that does a sharp job of hiding the UB900’s disc tray, along with front-mounted USB and SD card slots.

Overall, the UB900 presents a much more handsome face to the world than the slightly clumsy and plasticky look of Samsung’s K8500 deck. This, at least, explains some of the difference in price, though my in-depth tech overview later on explains the real reasons.

The SD card slot and USB port can be used for playing video, photo and music files through the UB900 on your TV/AV audio system, while connections on the deck’s rear include 7.1-channel analogue audio outputs and two HDMI outputs – one capable of delivering both pictures and sound to a TV; the other designed to ship audio only to a compatible AV receiver.

The main HDMI is built to the v2.0a HDMI specification, and if you want to experience the full picture quality potential the UHD BD format has to offer, you’ll need a TV equipped with v2.0a inputs.

The UB900’s HDMI sockets introduce one of the deck’s premium features. Panasonic’s designed them so that if the deck detects audio being output through the secondary HDMI, it’ll automatically turn off the audio part of the main HDMI output, reducing the potential for interference between the audio and video signals.

Related: Ultra HD Blu-ray: All you need to know 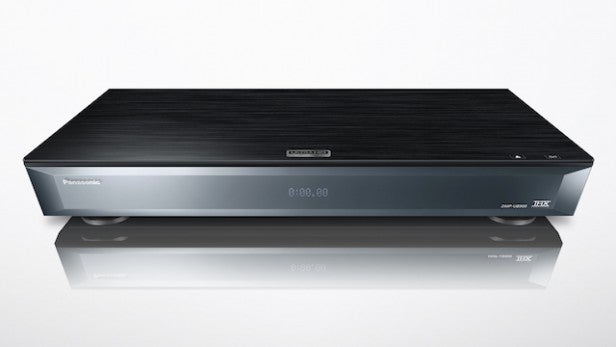 Panasonic’s bid to minimise interference in the audio and video paths doesn’t stop there, though. The UB900 can also automatically turn off its connection circuitry for its coaxial, optical and analogue audio output ports if they’re not being used. Or if the deck detects you’re listening to music rather than watching a video disc, it can completely turn off its video circuitry as well as any audio outputs you’re not using.

Joining this unexpected ability to divide the labour of the UB900’s electronics is its ability to upscale CDs to 192kHz, and a seriously ‘Hi-Fi’ roster of internal audio components. For the sake of your sanity I won’t list them in full, but experience suggests that the sort of gear the UB900 is fitted with across its analogue, digital and power supply sections should deliver tangible sonic benefits, particularly when it comes to bass depth, timing, detail, clarity and simple musicality.

To underline this point, the UB900 features a ‘Sound Effects’ menu with options to resample audio to suit specific music types (jazz, pop/rock and classical). There are even six ‘Digital Tube’ presets designed to recreate the sort of sound you might expect from an old vacuum tube amp.

The UB900 can play CD, DVD, and HD/3D Blu-ray discs, though I guess you could feel a bit disappointed given its clear interest in audio quality that its disc compatibility doesn’t extend to SACD or DVD-Audio discs. However, the player can handle high-resolution audio file formats (including FLAC and DSD) delivered via NAS drives or USB sticks, which is more important these days.

The fact that I’ve spent so long discussing the audio features of a Blu-ray player speaks volumes about just how far Panasonic has gone to make this a truly premium product. Yes, it’s an Ultra HD Blu-ray player, but Panasonic’s squeezing out as much value as possible. It’s not just a disc player but a serious piece of AV gear for all your needs.

Now, if you just care about the picture quality then I suggest you head to the performance section of this review now, because I’m about to dive very deep into the inner workings of the UB900.

Here comes the science, but I really mean that.

Obviously, the UB900 delivers the basic Ultra HD Blu-ray requirements of 4K/UHD resolution – high dynamic range (HDR) and an expanded colour gamut. But for the UB900 that’s just the start, with Panasonic’s engineers identifying three key picture quality areas where they believe they can make a difference.

First, since Ultra HD Blu-ray only mandates chroma sampling at the 4:2:0 standard, it needs to be upsampled to 4:4:4 to deliver the best results on high-quality TVs.

Second, since Ultra HD Blu-rays carry 10-bit video masters, the player ought to be capable of delivering more than 10-bit accuracy to deliver optimal performance.

Finally, since not all TVs support every aspect of Ultra HD Blu-ray’s video feast – not actually 4K, or no support for HDR or the BT.2020 colour ‘container’ – an Ultra HD Blu-ray player needs to be able to automatically recognise a TV’s limitations and convert the UHD BD video signal into something the TV can handle.

Similarly, as not all discs you’ll put into the UB900 will likely be Ultra HD Blu-rays, the player needs to be able to offer high-quality 4K upscaling.

The UB900’s Chroma Processor replaces the typical ‘two-tap’ chroma filter with a multi-tap one that delivers colours more accurately, and then applies unique edge adaptive processing to reduce colour errors even more. The result should be ultra-crisp edges within the image and, as a result, an increased perception of sharpness.

The UB900’s Chroma Processor system is also used to ensure that Ultra HD Blu-ray signals are delivered to TVs with the latest HDMI sockets in 12-bit form, guaranteeing 10-bit levels of gradation in the UHD BD pictures.

When it comes to converting Ultra HD Blu-ray video to TVs that might not support its full capabilities, it automatically detects your TV’s capabilities – or, more specifically, the capabilities of your TV’s HDMIs – and selects the correct output mode.

More importantly, and unusually, when converting HDR sources to SDR (standard dynamic range) ones, the UB900 goes to the trouble of converting the HDR tone curve and colour primaries in linear RGB, so that they can be remapped to SDR’s lower dynamics more effectively.

The UB900 even allows you to manually adjust the brightness component of the final converted SDR signal for output, to match the brightness of your screen, ensuring you should still get a great experience ahead of upgrading to an HDR TV.

The UB900’s upscaling of HD sources to 4K for output to 4K TVs, meanwhile, differs from typical systems in two ways. First, it upscales the video in a single stage rather than pushing it through multiple stages that may introduce errors to the process. Second, it doesn’t just add more pixels, it also doubles the picture’s luminance and quadruples the colour resolution.

One more straightforward, but still potentially useful feature of the UB900, is the option it provides to completely turn off the HDR component of an Ultra HD Blu-ray output. You might wonder why anyone would want to do this, but actually I found a compelling reason for just such a feature during my recent review of the JVC DLA-X7000 projector.

This makes the UB900’s manual on/off option very useful if dealing with a TV or projector that claims to be HDR capable, but don’t do a very good job of it.

This run down of the UB900’s features might seem a little bewildering, but these are the sort of waters you’re operating in when you’re tackling the high-end of the brave new 4K/HDR video world.

With so many picture and sound quality features at its disposal, it’s really no surprise that the UB900 has been certified for its 4K video and audio performance by the independent THX quality-assurance programme.

It’s also earned the Ultra HD Premium badge of honour from the AV industry’s Ultra HD Alliance, showing that it managed to pass a series of tests designed by the UHDA to assure consumers that it’s a product capable of delivering an uncompromised and uncompromising 4K HDR video performance.

One last handy feature to mention here is that the UB900 carries a selection of ‘smart TV’ apps, including the BBC iPlayer and the 4K versions of Amazon Video and Netflix.