The new icon-based,
overlaid onscreen menus are a vast improvement over last year’s Samsung
efforts, and now make using the TV’s smart features feel like an
integral part of the TV experience rather than a completely separate
domain.

We guess you could argue that Tizen’s look is like a
less characterful and, in truth, slightly less flexible version of LG’s
WebOS engine, but there’s not really much harm in that. It does feel at
the moment as if a little something is missing from the Tizen experience
– possibly the Recommendations engine Samsung claims it will be adding
in the coming months. But overall Tizen confirms the feeling we got when
we first saw WebOS that this sort of overlaid icons,
treat-everything-as-an-app approach is surely the way ahead for Smart
TVs.

Turning to that other key part of any smart TV interface –
the remote control – we find Samsung again in much improved form. At
least where the brand’s new ‘smart’ remote control is concerned; the
secondary one you get alongside the smart one with most of Samsung’s
smart TVs has a rather old-fashioned, button-heavy layout and
depressingly lightweight build quality. It makes precious little effort,
either, to organise itself in a way that reflects modern Smart TV use. 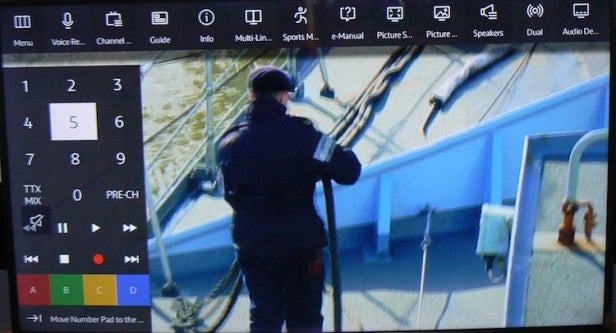 The
new Smart TV remote, on the other hand, feels vastly more in tune with
modern TV usage – so much so that you’ve got to think that pretty soon
it might be the only remote Samsung ships with its Smart TVs.
For
starters it features a massively stripped-down button count, providing
only the keys that consumer research suggests modern users most want to
use. Particularly striking is the way the coloured Smart button for the
Tizen home hub is positioned by itself below all the other buttons,
making it effortless to find even in a dark room.

The
smart remote’s layout is also very intuitive in the way it sensibly not
only provides two alternative control systems – each suited to
different areas of usage – but also makes sure each of these systems
gets its own area on the handset, to prevent you mixing the two up.
Towards the centre of the handset is a fairly traditional left, right,
up and down set of menu navigation buttons, while in a separate zone
above, between the volume and programme change buttons, is a nifty
point-and-click system. Just gently rest your finger on the pointer
button and you get to control a cursor just by pointing the remote at
the part of the screen you want to interact with.

The improved
layout of Samsung’s latest smart remote owes much to Samsung’s decision
to remove the touch pad control option present on Samsung’s smart
remotes for the previous couple of years. This seems an eminently
sensible move to us, as the touch pad always felt rather fiddly and
imprecise. 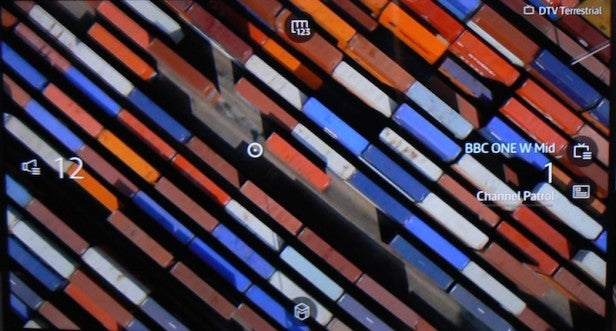 The
only significant issue we have with the new Smart Remote is the way
that the onscreen cursor doesn’t always seem to be in the right place
when you’re using the point and click control system. This is because it
always reappears at the point on the screen where it was when you last
stopped using it rather than popping up at the part of the screen where
you’re actually pointing the remote. The cursor always tracks the line
of motion of the handset accurately, but the lack of direct correlation
between your pointing direction and the cursor position is sometimes
disconcerting.

To finish on a high note, one neat touch we
haven’t previously referred to is the addition of contextual menu
options at the centre of each edge of the screen when you’re in point
and click mode, providing you with handy shortcuts to things such as
programme listings, volume controls or smart menus. This is a great
touch that suggests that Samsung has genuinely tried to road-test its
Smart TV system for this year, rather than just piling on the features
regardless of the interface’s ability to deal with them.

When we first started
using the new Tizen OS a month or two ago it ran rather sluggishly and
was buggy to say the least. Thankfully, now the system runs smoothly and responds quickly to your inputs –
so long as you give it a few seconds to ‘boot up’ properly after
turning the TV on. What’s more, the latest running speed
seems to hold up on Samsung Quad Core TVs such as the UE48JU7000T as well
as the Octa-core UE65JS9500 and UE65JS9000.

There
are far fewer bugs now too – though it has to be said
that the Tizen system still feels like a bit of a work in progress in
this respect. During our tests we experienced a few occasions when
certain apps wouldn’t boot properly, simply offering a message
suggesting that we try again later. Also, a couple of times the
system seemed to get stuck in an ‘update loop’, where we couldn’t
download new apps or open some other apps because, according to the TV,
it was eternally updating the smart hub.

We should add, in
fairness, that Samsung was unable to replicate these issues at its own
laboratories, but they certainly happened to us using the same test room
and broadband connection we use for all of our TV tests without usually
suffering such problems.

It’s
worth adding, too, that Tizen may challenge the patience of people with
slow broadband speeds, as it seems to require more and larger updates
than most smart systems we’ve seen before. Though as with the other
issues we’ve mentioned, we expect the regularity of the updates to
reduce as the system becomes more bedded in.

Samsung
has made great smart TV strides with the introduction of its Tizen
system. It’s quicker, far slicker and much more focused on stuff a TV
viewer actually wants a smart TV to offer than Samsung’s previous smart
engines.

That said, right now it feels a bit incomplete. We
suffered a few bugs during our tests and also felt as if something was
missing on the feature front – probably the in-the-works content
recommendation system.

These issues will likely be addressed in the
coming weeks and months, however, and you have to applaud Samsung for
being willing to jettison its clunky old smart ways and
for being brave enough to shift its smart focus from pushing the
quantity of apps it carries to pushing the quality of the user
experience.