Author’s note: When we first reviewed this TV it suffered with significant motion blur problems. However, Samsung has responded to our concerns by developing a new firmware update that we’ve had the chance to check for ourselves and which seems to pretty much completely rectify the motion issues. So the review below has been rewritten and the TV’s final scores changed to reflect this new situation.

The UE48JU7000T is a UHD TV that can be yours for just £1400 – miles below the many thousands of pounds demanded by the Samsung ‘SUHD’ TVs we’ve tested recently. Why is it so relatively cheap? As well as being substantially smaller at 48 inches than the 65 and 78 inch sizes of those SUHD models, it isn’t HDR compatible; it doesn’t feature Samsung’s high brightness, wide colour gamut SUHD technology; and it’s flat rather than curved.

The UE48JU7000T’s design won’t set pulses racing like those of Samsung’s JS9000 and JS9500 models. The use of a deep grey rather than metallic silver colour scheme subdues the impact of the chamfered frame, and the finish looks generally less opulent. The rear, too, is much blander, shorn of the polished smoothness of the JS9500 and the corrugated coolness of the JS9000.

This isn’t to say the UE48JU7000T is ugly; its arced single bar stand is elegant and eyecatching with its gleaming raised front edge, and gives the TV a pleasing ‘tilted back’ stance. Perhaps the best word to sum the UE48JU7000T’s design up would be ‘neutral’ – which may actually suit many UK households. 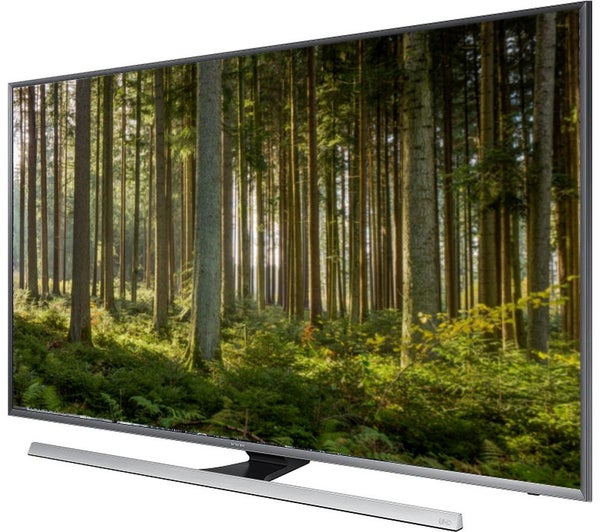 The UE48JU7000T’s connection situation is a bit odd. While it ships with an external One Connect box like the JS9500 and JS9000 series it’s only a ‘Mini’ version, containing four HDMIs and two USBs. The satellite and terrestrial tuner inputs are on the main TV frame, and it turns out that unlike the full-sized One Connect boxes, the Mini doesn’t contain the TV’s ‘brains’. Which means it can’t just be ‘hot swapped’ in the future for upgraded One Connects containing future Samsung operating systems.

Disappointingly, then, the only point to the One Connect Mini is that it makes it easier and tidier to connect all your sources to the UE48JU7000T.

One plus point about the UE48HU7000T’s connections, though, is that you get twin Freeview HD and twin Freesat HD tuners, opening up the potential for being able to record one channel while watching another, or stream one channel to an external smart device while another is watched on the main TV screen.

The UE48JU7000T is, as stressed earlier, not one of Samsung’s SUHD screens. So its brightness is greatly reduced versus the JS9500 and JS9000 ranges, and it doesn’t feature Samsung’s Nano Crystal take on Quantum Dot colour technology. This is not to say the TV is poorly specified for its price point, though.

For starters, it’s illuminated by a direct LED backlight system, where the lights are positioned directly behind the screen. What’s more, this direct LED lighting is driven by a local dimming system, which can adjust the light levels produced by different zones of the backlights to greatly boost contrast. 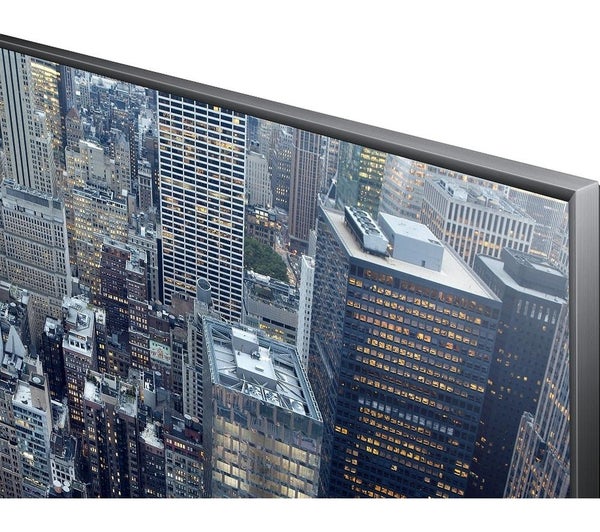 Inevitably for any high-end TV in 2015, the UE48JU7000T’s screen contains a UHD pixel count of 3840×2160. Some may question the usefulness of having so many pixels in a screen as relatively small as 48 inches, but we’ve seen enough evidence from other small-screen UHD/4K TVs to know that such resolution really can still be worthwhile below 50 inches – so long as other key aspects of the picture are functioning well.

The UE48JU7000T also has plenty of processing power to its name. It doesn’t extend to the Octa-Core chips found in Samsung’s SUHD TVs, but it does enjoy a Quad Core engine which drives both a Tizen operating system and a 1300Hz-emulating motion compensation system.

The Tizen Smart TV system makes the UE48JU7000T much more intuitive and slick to use than Samsung’s 2014 Smart TVs. It follows the lead of LG’s webOS smart interface in introducing a tiled interface that occupies relatively little screen space and focuses sensibly on streamlining access to all the content you like most, including recently watched sources and channels. You can of course also access Samsung’s full – and huge – range of apps if you wish, and add them to your opening ‘favourites’ list.

Among the Tizen video services on offer are BBC iPlayer, ITV Player, 4OD, Demand 5, Netflix and Amazon Prime – with support for the UHD streams from the latter two services if your broadband is fast enough to carry them.

The Samsung ‘learning’ system, where the TV can recommend programmes based on your viewing history, sadly does not feature on Tizen TVs at present, though we’re assured it’s coming soon.

One last key feature of the UE48JU7000T is its 3D playback. Since this uses an active system it has to upscale HD 3D Blu-rays to UHD – something which previous Samsung 3D UHD TVs have done really effectively. However, despite being a pretty high-end TV in Samsung’s 2015 range, the UE48JU7000T doesn’t ship with any 3D glasses included. This strikes us as a potentially quite major moment in 3D’s decline given Samsung’s previously staunch support for the format.

As with Samsung’s JS9500 TVs, the direct backlighting in the UE48JU7000T makes it much easier to set up than most Samsung TVs, as the backlight engine proves much more tolerant of different settings. So much so that some of the picture presets the TV provides are actually watchable with only minor adjustments – something that certainly can’t be said of most Samsung TV presets. 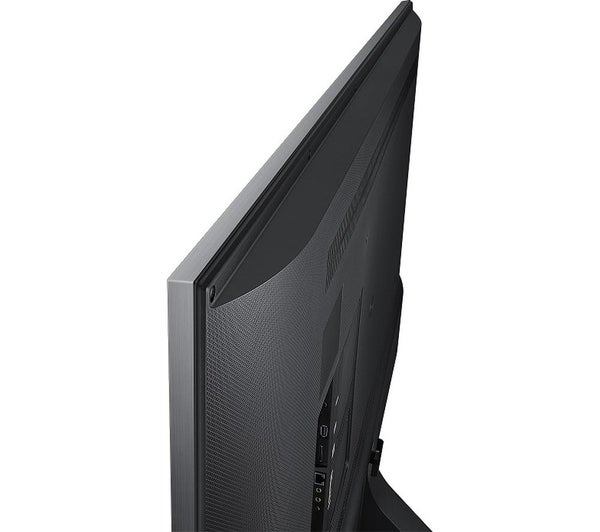 A key point to bear in mind if you want to optimise the UE48JU7000T’s pictures is that you can leave the backlight higher than you typically would with a Samsung TV without dark scenes succumbing to backlight clouding. In fact, setting the UE48JU7000T to the 8 or 9 level we’re accustomed to selecting with Samsung’s edge-lit LCD TVs results in quite a lot of crushed shadow detailing in dark areas. We’d also suggest setting the Smart LED local dimming feature to Medium rather than the usually-recommended Low, and that you turn off all noise reduction systems when watching HD and, especially, UHD sources.

Finally, we’d recommend that you use the TV’s motion processing on either its Clear mode or a Custom mode with the blur and judder elements set to around their three level.